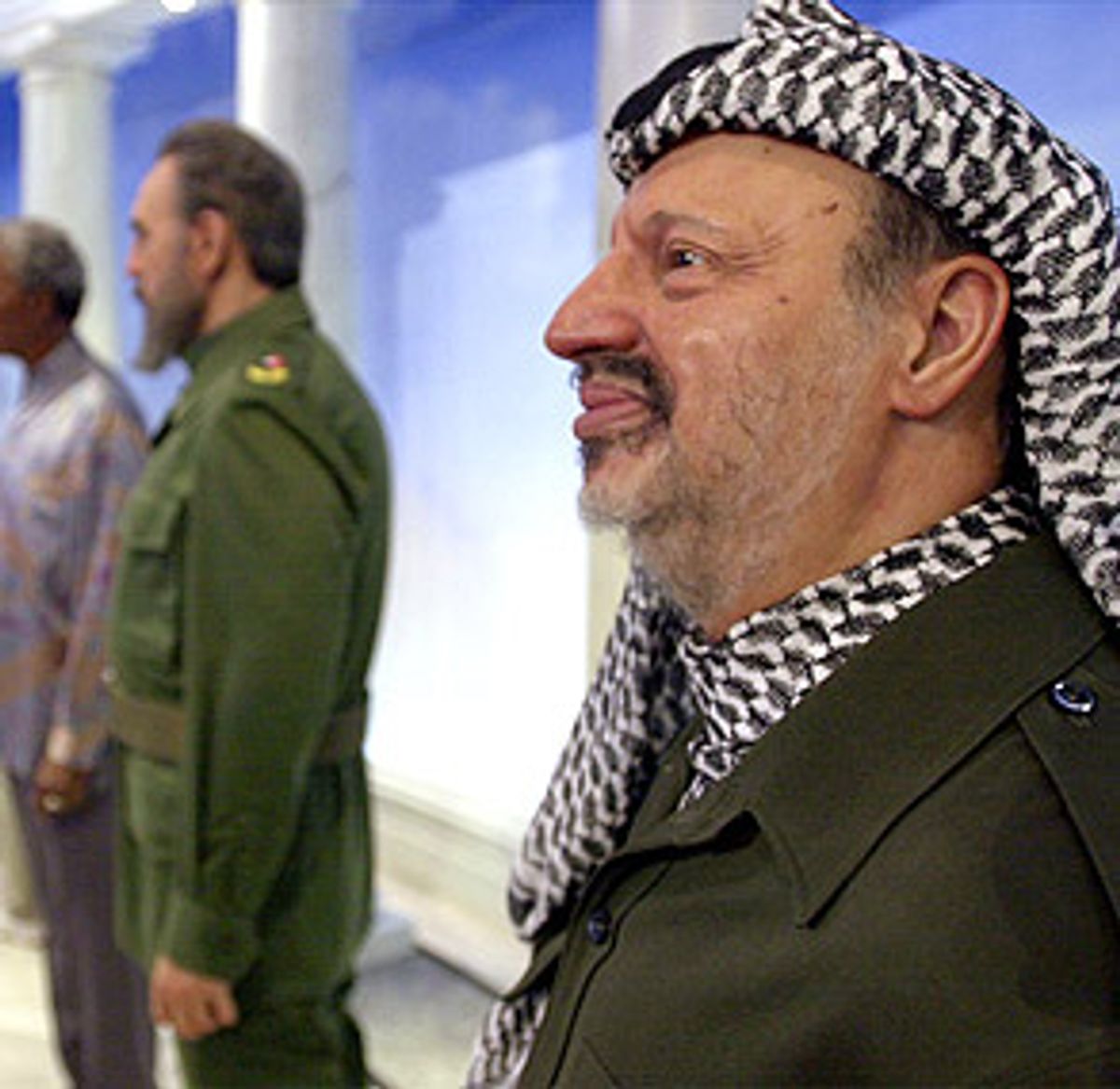 He is smiling benignly, with his hands clasped behind his back. The trademark checkerboard headdress, the kaffiyeh, is nobly swept over his right ear. His olive military fatigues are starched and pressed. His brown leather shoes gleam. And while his beard is sparsely populated with kinky salt and pepper, and liver spots are visible around his temples, the acne scars have all but disappeared.

Sure, Arafat has the sheen of the embalmed. But he is wax, after all.

And here at Madame Tussaud's Wax Museum on Times Square, the 1994 Nobel Peace Prize winner is in esteemed company.

In the museums's bright, airy rotunda, standing before a row of Roman-style columns, is a pantheon of figures described by the museum as "distinguished and diverse world citizens whose lives and achievements have had dramatic impact on the affairs of our planet." From left to right are Mahatma Gandhi, Pope John Paul II, the Dalai Lama, Nelson Mandela, Fidel Castro, Arafat, Mikhail Gorbachev and Golda Meir.

None is universally beloved, but it's Arafat who sparked protests last Thursday outside Madame Tussaud's -- and extra security measures inside.

"Yasser Arafat is a symbol of terror and violence; he should not be glorified," said New York Assemblyman Dov Hikind, who led some two dozen protesters in demanding the statue's removal.

"Some people say, 'What's the big deal? It's only wax.' But it is a big deal. Thousands of visitors go through there, and to have him in that hall sends a message that he is kosher. And Yasser Arafat is not kosher, with all the Jews and Palestinians he's willing to sacrifice for his vision of peace."

This brouhaha is only the latest salvo in the battle between American Jews and Arabs to capture American public opinion on the Middle East conflict. At stake is the crucial support of the world's lone superpower, which some Jews view as vital for Israel's very survival. These highly publicized scrapes also enable American advocates to feel they are somehow joining their brethren on the front lines of the faraway conflict.

Presumably, neither side believes it will change the minds of those already familiar with Mideast politics. But by demonizing the other side -- say, by painting the Israelis as killers of Palestinian children, or Arafat as sending those children into harm's way while going after Israeli children with suicide bombers -- activists hope to sway voters seeking a simpler way of separating the good guys from the bad.

News coverage, of course, is instrumental in shaping that opinion. And both Arabs and Jews say the U.S. coverage has been slanted against their brethren throughout the eight months of this, the second, Palestinian intifada. So the rivals continue their stateside crusades to drive home their messages.

In October 1999, for example, Disney buckled under Arab pressure to not identify Jerusalem as Israel's capital in its Epcot Center millennium exhibit. The Arab community had resurrected the threat of boycotts, first introduced in 1945 and consistently condemned by the U.S.

CNN caved the following month, changing Jerusalem from the capital to Israel's "largest city" on its year 2000 Web site. (Israel was the only nation without a capital.) Jews responded angrily, and the network later clarified that Jerusalem is Israel's "self-declared capital" and explained to readers the city's disputed status. (CNN came under fire again in August, when Jewish viewers forced the network to return Jerusalem to its place beneath Israel on its online weather map.)

Arabs have also targeted Sprint, Burger King, Benetton and Ben and Jerry's with boycott threats, in some cases for doing business in the West Bank.

Jews are also on the lookout for affronts, and have sometimes proved prone to overreaction. In December, many were outraged to learn that Wal-Mart and Sam's Club were selling decorative globes that denoted Palestine but not Israel. They then sheepishly learned that Israel was indeed identified (with inlaid gemstones, to boot), with Jerusalem as its capital. The word "Palestine" was there, too, but mysteriously hovering over the Mediterranean somewhere between Israel and Lebanon.

The Wal-Mart incident came just a few weeks after complaints about McDonald's had petered out. Protesters discovered that Israel's outlets had been excluded from the chain's Web site because of a decision made by the Israeli franchise owners, not McDonald's.

Hikind himself attracted media attention earlier this year when he raised some $150,000 to buy bulletproof vests and helmets for Jewish schoolteachers and emergency-care workers living in the West Bank and Gaza.

Now Hikind has attracted the support of 58 fellow state legislators from across the political spectrum, and is calling for Madame Tussaud's to remove the waxy Arafat from its Times Square branch. The museum, which opened in October, occupies prime real estate that Hikind says is jointly owned and leased out by the city and state.

Mayor Rudy Giuliani, who has been outspoken in support of Israel and critical of Palestinians during the ongoing violence, had no comment. But New York Gov. George Pataki did weigh in, arguing that "a flattering portrayal of Yasser Arafat has no place in New York City, in my view has no place anywhere."

(Pataki was soon criticized by the National Jewish Democratic Council for forging ahead with a planned $100,000-per-head fundraiser at the museum in June to benefit the Republican Governors Association.)

In response to the statue's critics, a spokesman for the largest Arab-American group in the U.S. was quoted by Reuters as saying the petition was "pandering" to the pro-Israel community -- in a state with the largest concentration of Jews in the country, and in which Jews constitute 12 percent of the electorate.

The controversy itself, said Hussein Ibish, spokesman for the American-Arab Anti-Discrimination Committee, is "depressing nonsense."

"Politically and psychologically, they pretend Palestinians don't exist," Ibish said. "They think that if you just melt the wax figure of a Palestinian then everything would be OK."

But Hikind does not have the wholehearted support of his community. Some New York Jews expressed hostility toward his cause last week, saying such a protest makes Jews appear silly, hysterical or paranoid.

Others, though, view it as a masterstroke of public relations. Local and national media were all over the story, highlighting what Jews claim to be Arafat's direct role in instigating violence and bloodshed.

With "hasbarah" -- a Hebrew term that falls somewhere between explanation and propaganda -- assuming a central role in the Jewish mind-set as Israeli-Palestinian violence rolls on, Hikind used the uproar to disseminate his pro-Israel view in interviews he said had numbered in the dozens.

But it's unclear whether Hikind truly wants to open the Pandora's box of censoring which statues may or may not stay: Might not Arab- and Muslim-American leaders demand the removal of the Golda Meir statue?

Madame Tussaud's, for its part, said it has no plans to oust the leader of the Palestine Liberation Organization.

"The decision to portray an individual is irrespective of any political or religious stance," Janine Scarpello, the museum's general manager, said in a statement.

A Los Angeles spokeswoman for the museum, Terry Wills, said the museum's attractions are designed for "the personal experience, which encourages individual consideration and reflection. Some of the statues make you happy, some may make you sad, depending on your personal frame of reference."

In New York, museumgoers are generally nonplused by the situation.

The giggly teens and tourists from Middle America who roamed the museum last Thursday were less interested in the political figures on display than in the photo opportunities presented by the hunky Brad Pitt replica, the slimmed-down Oprah Winfrey or the wheelchair-bound Christopher Reeve.

Back in the rotunda, standing beside George Washington and Abraham Lincoln, was a much more popular photo op than Arafat, Mandela or the pope: a freshly cast George W. Bush, his right hand offered in a frozen gesture that seems to say, "I'm a uniter, not a divider."

The crowd couldn't help wondering why a CNN camera crew was hovering a few steps away, near the guy in the checkered headdress.

While the descriptions of other historical figures offer flowery adjectives and quick summaries of their accomplishments, the Arafat description is innocuous -- perhaps a reflection of politically correct sensitivities.

"The Madame Tussaud's artists traveled to Tunis, accompanied by a BBC film crew, for this sitting with the President of the Palestinian Authority," the sign reads, ignoring allegations that Arafat masterminded Palestinian terrorism for years -- and may continue to do so.

None of the passersby got worked up about it.

"You don't have to like Malcolm X, but he's history," one woman told the CNN reporter. "You may not like JFK or Billy Graham, but they're history. So I think [the Arafat statue] should stay."

Said another observer, "I would never assume that I could go to any museum and ask for a certain piece to be removed" because it was deemed offensive.

Mary Sansom of West Virginia, however, said Arafat "shouldn't be in the same place with people who are trying to do good."

And concerning the demonstrators outside: "I think they have a reason to protest," said Vicky Rohan of Akron, Ohio. "The whole thing over there in that country is such a mess. It's so sad that all those poor Palestinian children are being killed."

Hikind, meanwhile, vows to press for the statue's removal. But he has also proposed an alternative solution.

"I'm not saying you can't have someone controversial or who does not represent a democracy," he told me.

"But if they want to have Arafat in the museum, they can put him in a different section, with [Libyan leader Moammar] Gadhafi and [Iraqi leader] Saddam Hussein. That's the kind of company he fits into nicely."

Note: An earlier version of this story appeared in JTA Online, the news service of The Jewish Telegraphic Agency.