Barbara Walters helped ruin television news. So how did she get to be a martyr for journalistic credibility? 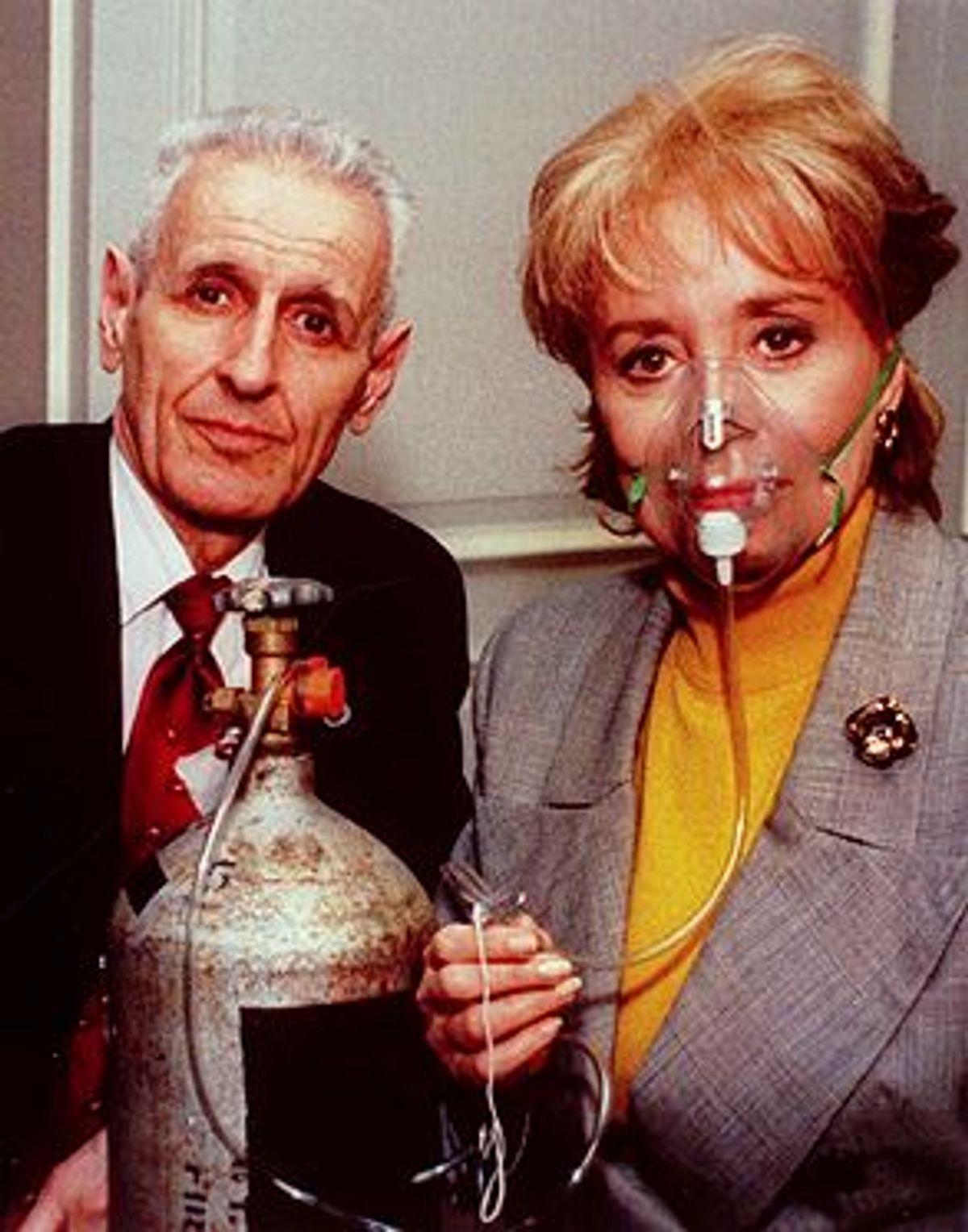 There's a crisis at ABC News. The sanctity of journalism is at stake. The ghost of Edward R. Murrow, even though the news pioneer worked for another network, is being summoned. Why? Barbara Walters is losing her Friday prime-time slot!

Could anything be more pathetic?

Last week, when ABC unveiled its new fall lineup as part of the annual "upfront" presentation for advertisers, gasps were practically audible when the ABC brass announced that its newsmagazine "20/20," hosted by Walters and a fixture on Friday nights for 14 years, was moving to Wednesday nights. Kind of. Actually, it's going to air on Wednesday only for approximately two months, and will return to its usual Friday night slot from December through September.

Pretty minor stuff, considering the networks do an extraordinary amount of juggling to create their all-important schedules. Plus, when one considers the thousands of journalists in both TV and print who are being laid off this year because of corporate cost-cutting, the fact that Walters, who makes $12 million a year to read "20/20" introductions, among other duties, was moved from Friday to Wednesday seems almost comically trivial, no?

No. Much ink has been spilled chronicling Walters' discontent, detailing the somber phone call she received from ABC News president David Westin breaking the news, hand-holding meetings at Walters' home as she processed the shock of the scheduling change, the brave face she put up initially (when not bursting into tears among colleagues), followed by her bitter break with ABC and the possibility that she might just walk out on "20/20," courtesy of a contract loophole.

It's all very dramatic. And it's all flat-out ridiculous. Because somehow in this mini-diva drama Walters has been transformed into a martyr for network news. Well, not somehow. Walters herself was pitching that line when she appeared on her daytime coffee klatch show, "The View," and unburdened herself about the "20/20" drama: "So many of us felt that news is a public trust and should be respected as such, and the perception was that ABC doesn't care about news, and because I was in the center of it there was a great deal ... I was almost becoming a heroine."

Forget the niggling embarrassment last year when Walters OK'd a deal with Campbell's Soup in which her "View" hosts innocuously talked up the product ("My daughter won't eat anything, but she eats Campbell's Mega Noodle") in exchange for Campbell's picking up the program's expenses during a West Coast trip. And never mind that Walters herself has long pioneered the transformation of television news into, literally, parlor gossip. Who, after all, better represents the watering down of television news than Barbara Walters?

How is it, exactly, that we're supposed to see Walters as a shining example of what happens when greedy entertainment execs run roughshod over a network and cast aside the aspirations of the honorable news division? The story we are being told is that Walters was dissed because ABC cares only about entertainment and has turned its back on hard-hitting, public-interest news programming.

Have any of these commentators, including Dan Rather and Katie Couric, who have rushed to Walters' defense, watched "20/20" lately? Has television news as a profession sunk so low that a show, when not investigating the poor sanitation conditions at discount nail salons, or airing interviews with Macaulay Culkin (Walters: "Tell me about your father"), can suddenly be regarded as a paragon of hard-news reporting? And can it really be possible that a host such as Walters, who's best known for making celebrities cry, is being regarded as a patron saint? Did we mention "20/20" wasn't canceled, but merely moved to a prime-time slot on a different night?

It's reminiscent of the laughable stink that surrounded ABC's 2000 Earth Day special in which teen heartthrob Leonardo DiCaprio interviewed President Clinton. ABC's Sam Donaldson, who plays a journalist on TV, was among those inside the network's news division who were appalled that an actor would get face time with the president.

By now you'd think it was long past the point that somebody would have let the newsies in on what everyone else already knows: News and entertainment are pretty much interchangeable. NBC's Tom Brokaw gets chummy with Jay Leno on late-night TV; CBS's Rather sings train songs on David Letterman's show. Candice Bergen of "Murphy Brown" is considered as a potential "60 Minutes" correspondent, CNN actually hires an actor, Andrea Thompson of "NYPD Blues," to read the news and a political sex scandal is essentially turned into prime-time programming for more than a year.

The two worlds of news and entertainment have fallen lovingly into each other's arms. In the process, the on-air players have become obscenely wealthy -- by being paid as entertainers, not as journalists. And now they're outraged that Walters' "20/20" has been treated as just another piece of network programming, like a sitcom or a TV drama?

It's a little late for that.