Will Trent Lott pay for losing the Senate?

Angry GOP moderates say the White House and party right-wingers drove Jim Jeffords out of his own party. 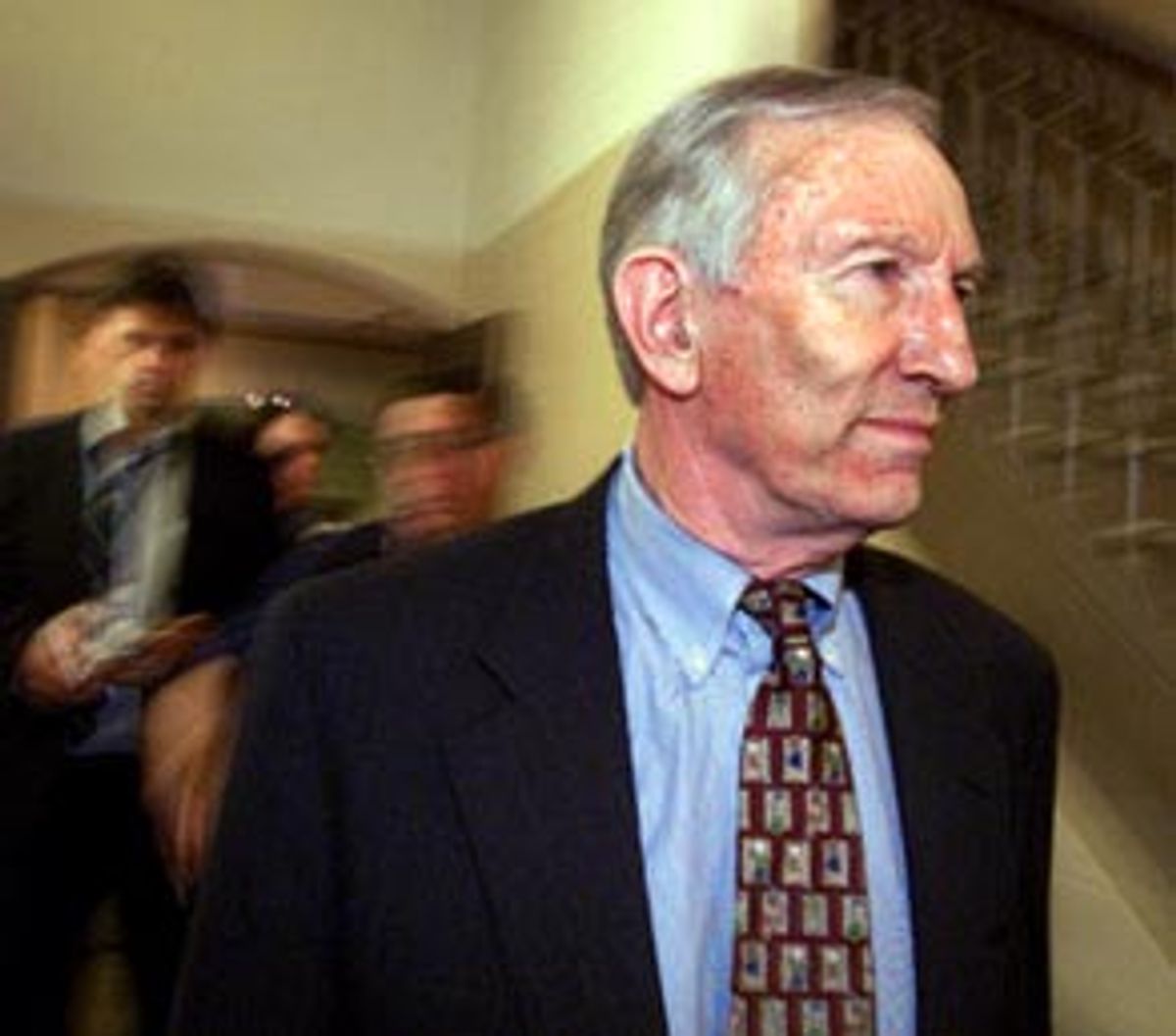 Tuesday should have been the GOP's moment of triumph: the day President Bush's tax bill passed the upper house of Congress. Instead, Republicans -- alternately furious and frantic -- watched their narrow hold on Senate power evaporate overnight. With Jim Jeffords headed home to Vermont for the most-anticipated political press conference in months, and with Democrats with names like Ted Kennedy measuring curtains for their new offices as committee chairmen, Republicans were left with just one conceivable question: Who lost the Senate?

The inability of the White House and Senate Majority Leader Trent Lott to keep Jeffords from going independent and switching his support to the Democratic leadership -- giving the Democrats an effective 51-49 edge -- is only the latest evidence that zealotry rather than pragmatism is guiding Bush's Republican team. The White House and Lott could have accommodated Jeffords' none-too-extreme insistence that the tax-and-budget plan make room for adequate special education funding. Instead they locked Jeffords out of a crucial conference committee, and kept him off the invitation list to a White House dinner honoring a teacher from his own state.

Across the hall from the Senate, Republican Rep. Christopher Shays of Connecticut offered this blunt and angry assessment: "If I were in the Senate, I would want new leadership." Shays places the blame squarely on Lott and his deputy, Mitch McConnell, who have proven unwilling or unable to work to keep a moderate like Jeffords within the fold.

"This kind of retribution for Senator Jeffords voting his conscience is foolish and reckless," Shays says in disgust. "Childish."

Shays, like Jeffords, is a Northeastern moderate -- less liberal on some issues than Jeffords, but a maverick campaign-finance reformer in his own right. He has publicly feuded with McConnell and Lott over their opposition to campaign-finance reform, and sees disturbing tone-deafness in both that issue and the Jeffords debacle. This is just a continuation of strategies that cost Lott nearly one-third of all the Republican senators up for reelection last fall, Shays says: "That was a humiliating defeat for the Senate under Lott and McConnell, and so is this."

But the Republicans' crisis runs far deeper than Lott and McConnell. Over the last generation, zealous conservatives have systematically purged their party of dissidents -- representatives of a moderate strain of reform Republicanism running from Abraham Lincoln to Nelson Rockefeller.

"This is just further disintegration of an all-inclusive Republican Party to a conservative party," says former U.S. Sen. and former Republican Lowell Weicker of Connecticut. In 1988 -- the year before Jim Jeffords joined the Senate -- GOP conservatives like William Buckley aided Democrat Joseph Lieberman in ousting Weicker from the Senate, in retribution for Weicker's famous civil libertarianism and criticism of Republican Presidents Nixon and Reagan. Two years later, Weicker -- like the Jeffords of 2001 -- went independent and won the state's governorship.

"Was it a strategic blunder to lose Jeffords?" he asks rhetorically. "Sure. Jim Jeffords was always an honest, honorable moderate Republican, and I am sure would have liked to stay that way. But let me remind you: They made the same blunder with me. The Republicans left me, just as they now have left Jim Jeffords." Intolerance, Weicker says, is not an eternal and essential GOP value: "I first went to Washington in a Republican Party where there was a Barry Goldwater and a Lowell Weicker, and they both got along. But this Jeffords business -- this is typical of today's Republicanism: just punishing people who don't get along on one issue or another."

Jeffords' defection is also the latest indicator that the supposedly secure and steady hands of Bush's team are in fact shaky. The first blunders came in foreign policy: the utterly unnecessary crisis with China, the administration's conflicting statements on the Mideast and the Balkans. But now the blundering has come home to Washington. Bush and Lott have between them managed to lose the Senate over a simple matter of respect, the most basic political currency in Washington, and one that often transcends ideology. Their willful disrespect of Jeffords turned a policy disagreement into a personal grudge match, and finally into a political crisis.

Ironically, while liberal Republicans have become insignificant numerically, the 50-50 balance of Senate seats after last November's election suddenly breathed new political life into a lone Republican maverick like Jeffords -- as into Democrats willing to vote across party lines, like Georgia's Zell Miller.

Indeed, playing the margins seems almost certain to become the main game in the Senate in the coming months. There has never been political calculus quite like what will emerge from Jeffords' defection. There has not been an independent or third-party senator since 1971, when James Buckley won the New York seat as a Conservative for a single term. There has never been a Senate this close.

For that reason, the long-term impact of Jeffords' defection is both greater and lesser than it seems. On the one hand, it represents a political earthquake: Overnight, a rigidly partisan judicial nominee like Bush's solicitor general-designee Ted Olson is immeasurably less likely to be confirmed. While Lott and other Republican leaders appear stoic, the fact is that the entire Bush strategy for rushing far-right nominees to the federal judiciary is dead in the water.

On the other hand, it is not insignificant that this power shift is happening only after 12 Senate Democrats crossed party lines to support the amended Bush tax plan, which Jeffords himself finally voted for as well. "It is certainly a power shift, but it is coming after some of the greatest damage was already done," says Russell Hemenway, director of the National Committee for an Effective Congress and a longtime political analyst. "We've had the executive orders on the environment. We've had the tax bill. It's important to remember that this remains an essentially conservative Congress -- and that includes a lot of the Democrats."

And if the Republican leadership bungled Jeffords, there is no reason to think Democratic leader Tom Daschle will be much more adept at sustaining discipline within his caucus. At least five senior Democratic senators aspire to the presidential nomination -- Lieberman, Kerry, Biden, Harkin and Edwards -- and they have every reason to listen to the polls rather than their party whips.

Other Democrats will see the loss of a GOP majority as a bargaining chip for pork-barrel investment in their home states. The Democrats may control the Senate, but Jeffords' defection will not bring about some springtime for senatorial conscience. Instead, it will raise every senator's price.

Still, there's no denying that Jeffords' defection is, first and foremost, a crucial loss for Bush. Like the GOP, the Democrats may snatch defeat from the jaws of victory, and they owe their sudden gain to Republican fanaticism rather than Democratic political skill. But for the first time since January, they have the numbers to mount an effective, sustained opposition to the Bush administration -- and can no longer point to a Republican Senate majority as an excuse.