Show me the monkey!

India's menacing monkey-man has New Delhi in hysterics and the rest of the world in stitches. What's more, the birth of the terrifying beast was inevitable. 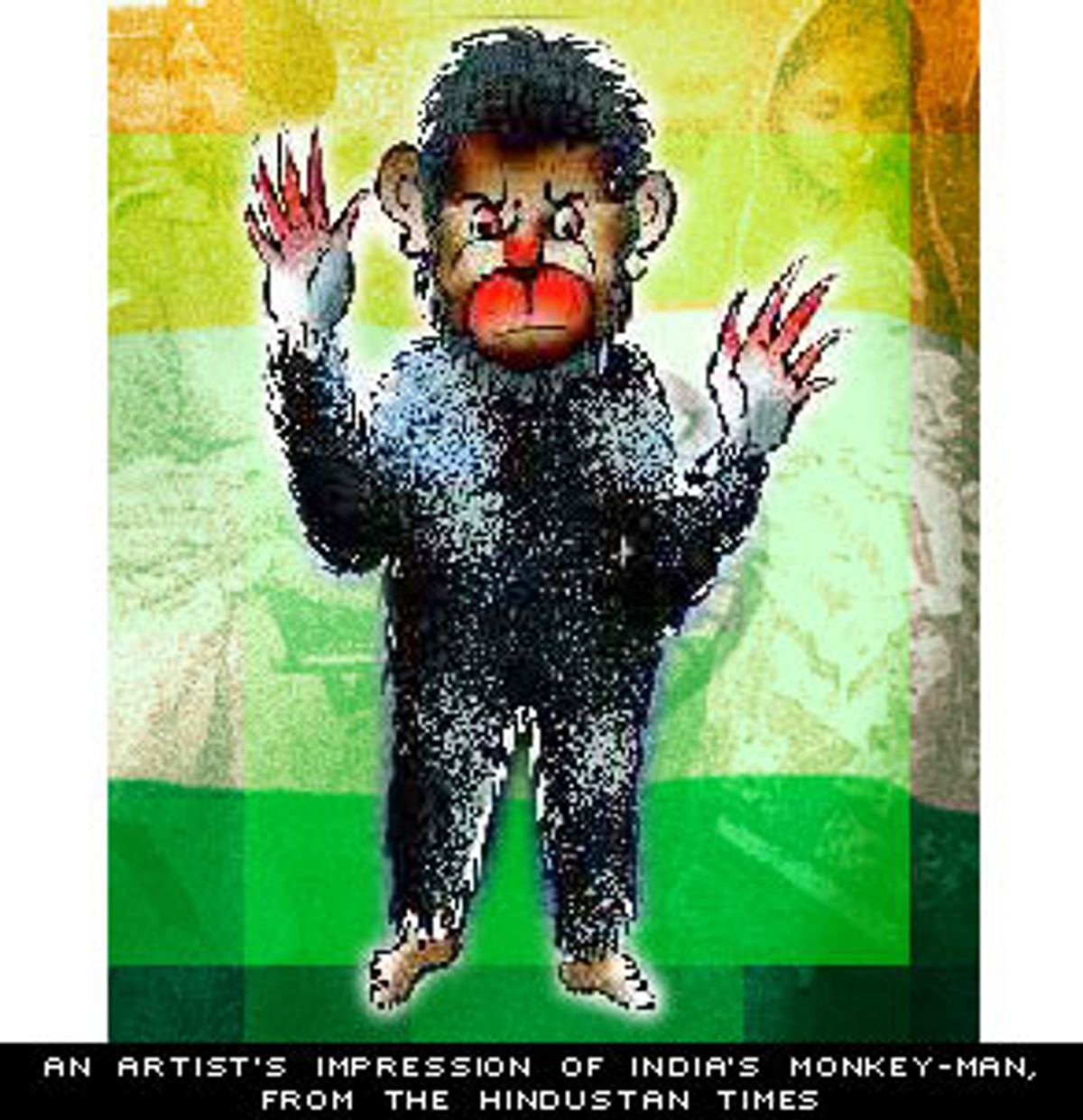 The monkey-man had to happen.

It was ordained, or at least fated, and what's more, the monster that still has parts of New Delhi hysterical is starting to sound pleasingly provincial. There's something quaint in the accounts of India's mysterious monkey-man springing on the sleeping, clawing them or biting them or frightening them off their feet, causing them to fall to the street below or down a flight of stairs until they're dead.

Quaint by the time the accounts reach the United States, at least. The injuries aren't quaint; neither are the panic-related deaths, but these are told in a larger context, one of colorfully naive citizens, given to touching hysteria and buckets of monster-repelling water at the ready in every tenement. It's a tone one takes when one is more amused than surprised, when a story is incredible but somehow not shocking.

The Hindustan Times first noted the sightings in early May. Residents of two New Delhi suburbs began reporting attacks by a mysterious creature. The attacks always came in the dead of night, scratchings and bitings that weren't exactly human and weren't exactly simian. The monster is hirsute, but his claws are consistently metallic. Sometimes he wears glasses, other times a helmet. He's too big to be an ape -- he's described as 4 or 5 feet tall -- but he leaps, growls and bites like one.

The creature was soon dubbed the "monkey-man," though many accounts suggested a feline element, too. It was "as small as a cat," one woman told the Indian Express. The woman's fingers had been bitten, her husband's teeth knocked out by "a metallic hand."

Another resident saw it larger, but agreed with the cat assessment. "It was a monkey alright, and about 4 foot tall, but as soon as I grabbed it, it turned itself into a cat with tawny, glowing eyes."

Half-man, half-monkey and half-cat, the creature put New Delhi citizens in a panic. Each night, the police logged dozens and dozens of sightings, and the number of alleged attacks shot up. Newspapers outside India picked up the story, reporting that nobody in the terrorized suburbs was sleeping.

"I don't sleep at nights and now always keep a bamboo stave by my side," 22-year-old Vinod Yadav told the Gulf News.

Since the recent hysteria began, a man and a pregnant woman have both fallen to their deaths fleeing the alleged creature. Some reports say that as many as four people have, in fact, died from similar falls. Also, a 4-foot-tall Hindu mystic was assaulted by a large mob who mistook him for the monkey-man. A few days later, according to the Hindustan Times, a young girl was also attacked, by people who believed she was possessed by the monkey's spirit.

Police did make an arrest -- a man named Dharmendar was picked up wearing a monkey mask -- but this did little to restore calm. Dharmendar claimed he was just a simple thief, according to the Hindustan Times, and that he was taking advantage of the hysteria.

"He donned the mask so that everyone would think he is yet another monkey-man at work and so would be scared of touching him," a police official said.

Though police maintain that the monkey-man doesn't exist, they've offered a 50,000 rupee reward for his capture. The bounty, worth a little over $1,000, has yet to be claimed, and by many accounts, the affected neighborhoods are as jumpy as ever.

But the monkey-man was a long time coming. Indians may be shocked, but monkey-related tensions have been escalating for a while now, and they were bound to coalesce one way or another. The Hindustan Times pointed out that the two accepted monkey-man deterrents -- light and water -- are the very things that the poor New Delhi suburbs can't get on a regular basis. But whether or not the creature is a political invention, his antecedents have, for the most part, been simian.

The ambivalence of the monkey-man's species seems to mirror India's ambivalence toward monkeys in general. The ancient monkey god Hanuman -- himself a mischief-maker as well as a hero -- plays a significant role in Indian iconography and, more to the point, keeps more people from shooting the pests. So does the Wildlife Protection Act of 1972. Consequently the monkeys, which line certain streets like pigeons, get something of a pass. They're the boss's bratty child, running around spilling drinks and generally getting little more than a slap on the hairy wrist.

These are not your grandfather's monkeys. They may steal ice-cream cones, but they also attack babies, vandalize property and even plan ambushes. In recent months, India has seen a rise in monkey-related injuries, as well as a number of truly bizarre incidents.

In Patna, residents recently witnessed a disturbing, albeit virtuous, new trend. In November, a group of 14 monkeys began marching routinely, single file, around an office building. It turned out to be an anti-smoking crusade. As soon as the marchers spotted someone lighting up, they would charge, dashing over to the smoker, extinguishing his cigarette and slapping him several times in the face. In some cases, they would also dig through the smoker's pockets and remove the entire pack. Other times monkeys would begin smoking themselves, which seemed to enrage them further.

"No one dares to carry cigarettes in their pockets, let alone smoke," a state official told newspapers. "Everyone is afraid of getting accosted by the monkeys."

"They have terrorized the entire neighborhood," an employee who works in the building said. "They enter offices and sit on the vacant chairs and flip through official files."

Efforts to appease them were rebuffed. People tried offering bananas and sweets, but reported that the monkeys wouldn't even look at them.

A month later, in Jagatsingpur, a monkey was finally captured after disrupting studies at a nearby college for several days. Before injuring some 75 students, the monkey was apparently quite pleasant. Then a massive storm came along and something changed.

"He would sip tea, smoke cigarettes and pretend to read a newspaper," his former master told the India Abroad News Service. "However he was shocked by the devastation caused by the super cyclone and since then has been behaving abnormally."

In Calcutta, another group of monkeys was nabbed -- jailed, in fact -- along with 25 railway porters. According to South Africa's Cape Argus, the two camps were working together to scam travelers out of a little cash. The monkeys were trained to climb through trains' windows at the Calcutta station; the porters then would charge alarmed passengers a fee to remove the creatures.

Back in New Delhi, monkeys had been getting more and more difficult long before the monkey-man appeared. Several months ago, newspapers reported that the prime minister's office was overrun, and that doctors and patients at the All India Institute of Medical Science were routinely chased down the hall. It wasn't uncommon, doctors said, for a patient to awake from surgery to find his or her bed shared by a monkey, and a second monkey tinkering with the blood transfusion drip.

(Even outside India, human-monkey dynamics have escalated. This past year, Japan zoo officials put a vending machine in their chimp enclosure so the monkeys could learn to buy soda, Thai police searched months for a monkey that got its head caught in a coconut, an eBay user auctioned off his monkey impression and Paris gangs began bolstering their ranks with dangerous Barbary apes, which appear to be the next pit-bull-like accessory.)

India's monkeys were already men. They dabble in medicine, grift train riders and discourage smoking -- putting on glasses and a helmet was in many ways just one last formality.

If a physical manifestation of their humanlike behavior is merely the next bizarre step -- be this manifestation imagined or, who knows, actual -- it's a step that crosses a line. In a culture where a monkey god once helped defeat a demon king, and where Hindu ascetics occasionally put on tails and run around like monkeys, and where macaques frequently leap from the gutter at pedestrians' heads, a hybrid appearing in New Delhi bedrooms is too much.

Eight thousand miles away, the monkey-man is too much for Americans, too. Wire stories get e-mailed around like Monica jokes, and when the New York Times ran a pair of police sketches -- they looked like a seventh grader's attempt at "Planet of the Apes" -- it was cemented: not only that the monkey-man was a hoot but that there was sense to be made of this fable.

These stories always translate interestingly. Not just because America's funny about developing nations, or because foreign emotions tend to dilute en route, but because we can't help getting anthropological. Now that colonizing is frowned upon, we conquer the Third World with definition. Magazine articles like this one forever speculate coolly about why various cultures yield various incidents. A man or monkey who mysteriously appears before people waving metal claws becomes a case study, a metaphor or just entertainment.

Indeed, it's hard not to read about the monkey-man as allegory. He's a quaint scold against mass hysteria, against departure from reason and even against poverty. Even within India, the cognoscenti are quick to echo the police department's claim that the monster is but panic's creation. Maybe there's a note of condescension in the echo, and maybe that's just frustration over the needless deaths.

In the monkey-man stories that appeared outside India, a certain remove can also be heard in the tone. They aren't patronizing -- the Times article last Saturday was terrific, and by and large Western writers have long since lost their obtuse haughtiness toward the East -- but they lack the astonishment that might otherwise attend the appearance of a monkey-man. Instead, the immediacy of the report blurs and we end up viewing it phenomenologically: We're familiar with this type of story. In a way, in fact, one might call it inevitable.

In a city of 6,000 wild monkeys -- a number that grows by 20 percent each year -- one of them was bound to stray into manhood. A nation can remain ambivalent about its apes only for so long: As their sacred mischief causes more and more trouble, and as the type of trouble further blurs the line between man and monkey, something eventually has to give. And when that thing is reality itself -- when a vanishing, morphing, leaping, attacking boogeyman convinces countless people of its existence -- the rest of the world will gape on cue. It's the gape of newspaper readers who somehow expect this of a country like India. None of the followers of the story will suggest that those seeing the monkey-man are rubes (this would be mean or obvious), so instead the panicky Delhiites are simply considered quaintly naive.

Back in New Delhi, residents have more important things to worry about than destined monsters and how America regards them. The monkey-man is still on the loose, at least as far as the city's insomniacs are concerned. While Thursday's Times reports that panic is starting to die down, London's Daily Telegraph says it's alive and spreading. And 200 miles away in Rajasthan, people are now seeing an apparition of their own, described in the Telegraph as "a cross between a huge monkey and a computerised robot." Police have found many of the reported injuries to be inconsistent with descriptions of the attacker, and have suggested that bandits are actually behind the incidents, but this hasn't stopped the late-night calls. The power-starved city has let the suburbs have electricity through the night -- a luxury previously inconceivable -- but it seems this can't last. Until the mystery is solved, sleepers might just keep waking to the now-familiar cry, cutting across quaint rooftops and into newsprint around the world: "The monkey-man is here!"