A girl's life: Three young actresses star in a winning, kind movie about the sort of teens who don't make it into most mainstream movies. 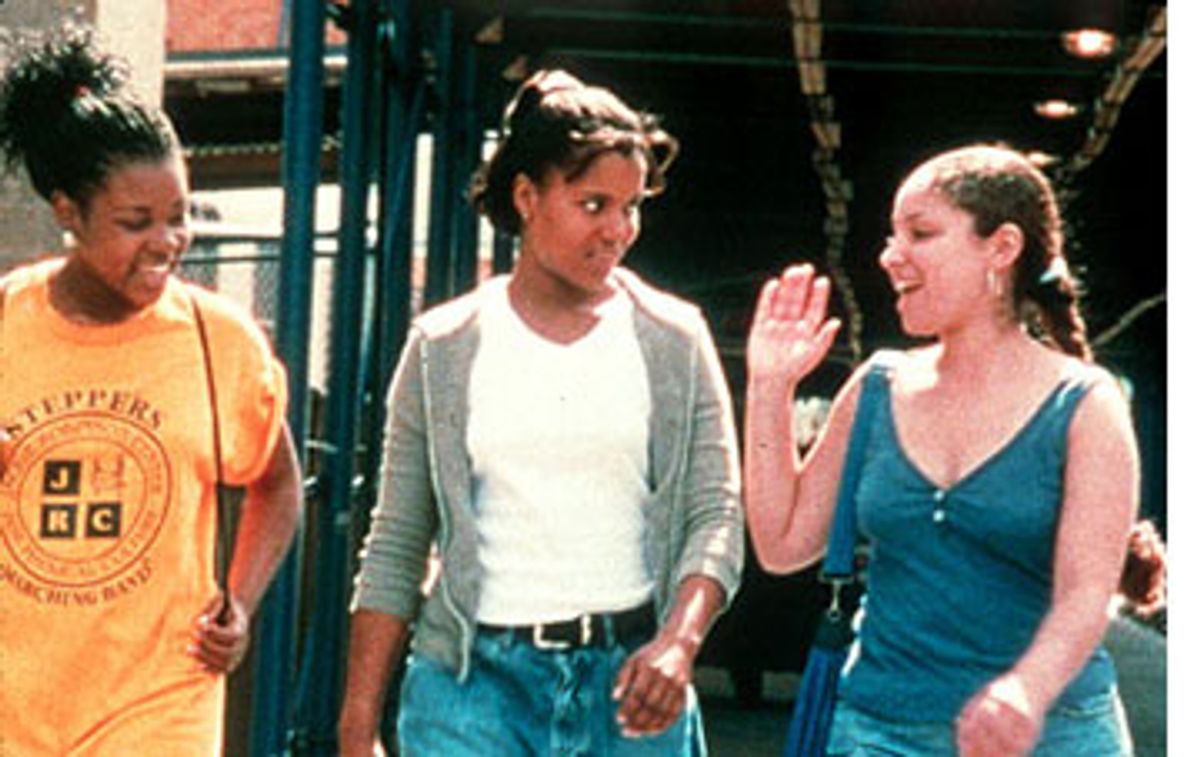 "Our Song" is one of those movies that you continue to pull for even after it becomes clear that it isn't very good. Jim McKay's story of three teenage girls over the course of a summer in the Crown Heights section of Brooklyn, N.Y., means to be true to the characters' experience and milieu, and to avoid teen movie clichés and slickness.

The three girls, friends, all belong to the Jackie Robinson Steppers Marching Band, a real, and quite wonderful, band that appears in the film and that served as McKay's inspiration for the film after he saw the group in a parade in downtown Brooklyn. One look at the way McKay and his cinematographer, Jim DeNault, shoot the faces of these kids, the way he exults in their precision and sassiness or the way he manages to capture both the grit of Brooklyn and the pleasures of a city summer (the incessant jingle of Mister Softee trucks in the background being one of them), and it's clear that McKay feels a commitment to this community, that he wants to do right not just by his characters but by this world. He's doggedly fair. The credit "A Film by ..." that precedes most films is here accompanied by the names of everyone in the cast and crew. If scrupulousness equaled good filmmaking, McKay would be top of the heap.

But there's a never-resolved tension in "Our Song" between the surface realism and the "After School Special" nature of the girls' various dilemmas. The location shooting, and the fairly smooth mixture of professional and nonprofessional actors, dissolve into movieness when the characters are speaking lines like "Things fall apart. We have to be strong and walk through it."

Maybe McKay needs to find a way to work improvisationally, because in almost everything else his approach is open-ended. To his credit, he doesn't feel the need to spell out everything for us. He simply enters into the girls' relationships with one another and with their families and lets us sort out the particulars. He's also refreshingly nonjudgmental. It's no big deal when the girls all shoplift new shirts. And McKay doesn't present it as a contradiction that the most grounded and sensible of the girls, Kerry Washington's Lanisha, got pregnant and had an abortion. A conventional film would save up the information for a bombshell, stop the story to impart it. Mckay relates it almost in passing, in a conversation between the girl and her mother.

What works here is the steady accumulation of small scenes and incidents. The movie takes place over the summer as the girls find out that their old school is being closed down for asbestos removal and that they may be separated in the fall. The girls -- besides Lanisha there is Jocelyn (Anna Simpson), the prickliest of the bunch, and the eager, almost childishly naive Maria (Melissa Martinez), a sweet girl who you can tell doesn't really expect her life to be better than her mother's -- start out as inseparable allies and then, without any particular trigger, drift apart and recombine before our eyes.

Jocelyn gets a job in a froufrou shop that's just slightly nicer than what she's used to, and the girls she works with start to seem more sophisticated, more alluring, than her old familiar friends. Maria, whose mother is frankly dependent on the money her daughter brings in from her part-time job, becomes pregnant and decides to have the child without considering the alternatives, acting almost as if they don't even exist.

It's almost impossible to pinpoint any dramatic high points of the movie because that's not the way McKay works. Most of the film consists of the girls simply hanging out, complaining about boys or their mothers, making silly wishes for fancy parties, talking about clothes. There are striking little offhand moments, like Maria's bringing some flowers to a makeshift memorial for two dead neighbors and touching the flowers to pictures of the dead people before laying them down. And Simpson has one of those silly adolescent moments that are so affecting because they capture the awkwardness of the age so well.

Going into an ice-cream parlor with her new friends, Jocelyn listens to them order, then shyly asks them what mochachino is before ordering one herself to fit in. She tops it a few scenes later when she uses this new information to make herself seem more knowing than her old friends. Simpson, whose cool exterior doesn't disguise Jocelyn's keen longing to fit in, is the nonprofessional among the three young actors, but the three of them blend together well. You hear the mutual support and prodding and sudden flares of temper in their exchanges.

But, again, the naturalism of the approach flounders on the obviously "written" dialogue. Maybe the differing experience of the cast made it hard for McKay to attempt improvisation, or maybe he just doesn't like to work that way. But he needs to do something to keep from contradicting the realism he's striving for.

The movie's ending is an example of what McKay might accomplish with a more exploratory approach. It consists of two long, unbroken shots, the first of Maria as she ambles home on a sunny morning, the second of Lanisha riding the subway to her new school. McKay doesn't do anything more than keep the camera on each girl, but we have a sense of being allowed to watch people behave as they do when alone, lost in their thoughts or not thinking much of anything at all. The shots communicate a sense of life taking place before our eyes.

And as the credits roll over that last shot of Lanisha, McKay accomplishes something only a handful of movies have: the sense of being transitioned back into the world outside the theater. "Our Song" is a kind, well-intentioned movie about the sort of teenagers who don't make it into most mainstream teen movies. But it simply isn't satisfying, and for all McKay's refusal to succumb to clichéd dramatics the movie needs something.

You couldn't make a case that "Save the Last Dance" is a better movie aesthetically than "Our Song," but it's a much more satisfying one. McKay has good instincts to resist easy conclusions and explanations, but he's a piker when it comes to writing. "Our Song" winds up caught between his off-the-cuff impulses and dialogue that smacks of bad "well-made" drama. It's not exactly a love match.