Today, May 25, 2001 -- a date which will live in infamy -- the United States of America was suddenly and deliberately attacked by naval and air forces of the Empire of Hollywood. Always will we remember the character of the onslaught against us. 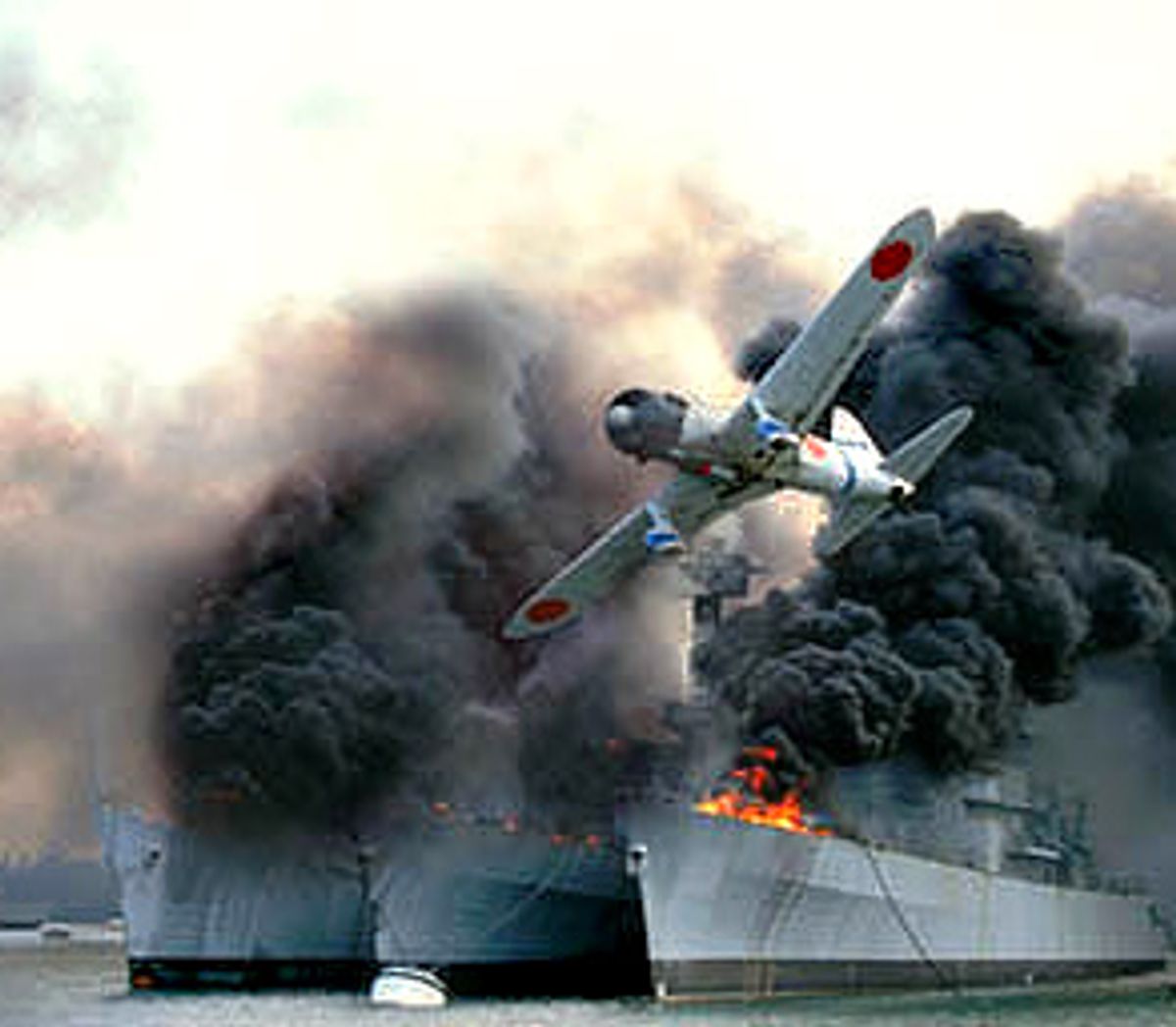 Movies based on historical events often play fast and loose with the facts -- it comes with the territory, and most moviegoers who have ever watched an Elizabethan costume drama or a World War II battle picture on Saturday afternoon TV know it instinctively.

But even viewed through that gaping and forgiving lens, the new breed of histortainment -- pictures like last summer's "The Patriot" and now "Pearl Harbor" -- invites just one appropriate response: jaw-dropping incredulity. Roland Emmerich's "The Patriot," its repeated unfurling of a beat-up and tattered Old Glory notwithstanding, wasn't about patriotism at all, but about one individual's relentless quest for revenge (think Charles Bronson with a pigtail). We also got to see a young soldier's head get blown clean off by a cannonball. What was the war like, Daddy, in the days before computer graphics?

Now "The Patriot" has a spiritual bookend in Michael Bay's "Pearl Harbor." The filmmakers claim they've been historically accurate, but they've done "The Patriot" one better: They've rendered accuracy beside the point. "Pearl Harbor" is just a three-hour epic loaded with loud guns and explosions for the boys, and extraordinary swing-era dresses for the girls. Romance, drama, pathos, wrenching decisions, ironclad ships blown to shards, charred and bloody limbs -- you name it, "Pearl Harbor" has it. Craftily shot by John Schwartzman, who serves up images like lovers shrouded in train mist as if they were menu items, it's a movie steeped in borrowed nostalgia. It's rousing in completely artificial terms.

The heroism of "Pearl Harbor" is unsullied by anything as mundane as patriotism -- it's hard to figure out if Bay and screenwriter Randall Wallace ("Braveheart," "The Man in the Iron Mask") think flag-waving is uncool or in bad taste or both. In any event, there are no Spielbergian "Saving Private Ryan"-type speeches to drag down the action, which would be a plus if only it weren't so obvious that the movie has muscles for brains. Subtlety isn't Bay's strong suit. "Pearl Harbor" is all lovin' and kissin' and brave fighter pilots, when it's not screaming men being blasted from their ships.

Wallace's narrative uses the bombing of Pearl Harbor as a backdrop for the story of the deep and lasting friendship between Rafe (Ben Affleck) and Danny (Josh Hartnett), who have been buddies since they were little squirts. An early flashback shows us Danny's father leading the young boy away by the ear, after he and Rafe have inadvertently taken a joyride in Rafe's daddy's crop-dusting plane. The two boys grow up to become fighter pilots, natch. Rafe, the more assertive of the two, gets a chance to go off with the British Eagle Squadron. He leaves behind Danny, who's sullenly resigned to being separated from his friend, and his nurse girlfriend, Evelyn (Kate Beckinsale), who swears lifelong love.

The rest of the movie meshes the story of the two guys and the gal, who eventually reunite at Pearl Harbor, with the unfolding of the Japanese plot to blow the whole thing to smithereens. In an effort to sprinkle around some early 21st century multiculti feel-good vibes, "Pearl Harbor" takes great pains to humanize the Japanese. They had good reason to sneak up and drop tons of ammo on a bunch of sleeping soldiers -- who knew? In the movie's vision, the commander in chief of the Imperial Japanese Navy, Adm. Isoroku Yamamoto (martial arts master Mako), hesitates before he tells his troops that they will "annihilate the Pacific Fleet in a single attack," glancing away from them to take in the happy sight of a group of children flying kites in the sun. Later, praised by one of his underlings for his glittering strategy, he remarks gravely, "A brilliant man would find a way not to fight a war." But hey, in Bay's world, war, like shit, happens -- no biggie.

The first half of "Pearl Harbor" zips along nicely: It may be ridiculous, but at least it's not boring. Once they're stationed at Pearl Harbor, Danny and his pals swagger around the base in their boffo Hawaiian shirts, vaguely apprehensive about the possibility of war but not particularly fazed by it. There are lots of pretty nurses around, and the boys revel in having so many skirts to chase. Long before the bombs start to drop, the only weapons the guys need to worry about are the long vaccination needles the nurses poke ruthlessly into their butts, turning the whole routine into a sassy mating ritual.

But there's trauma brewing amid all the romantic folderol. Danny, Rafe and Evelyn don't realize that they're about to face an unexpected personal trial, and back in Washington, a naval captain (Dan Aykroyd) tries to warn his colleagues that the Japanese are poised to "hit us where it hurts us the most." When asked why, he replies sensibly, "Well, it's what I would do."

But no one listens, of course, and before long Japanese pilots have started strapping on their leather helmets and dropping bad attitude all over Pearl Harbor. (Whenever the Japanese warriors appear, Hans Zimmer's score alerts us to their exoticism with a heavy drumbeat borrowed from taiko.) By the movie's end, we have the Japanese military strategy committed firmly to memory. The characters speak in Japanese, and over and over again we're reminded of their intent in subtitles: "If we achieve surprise, the Americans will offer little resistance."

Before long, the bomb-dropping sequence becomes a muddle of fireballs and billowing smoke, of doctors and nurses rushing about in panic, of screaming men sliding off the decks of upended vessels. Just when it should start to get exciting, "Pearl Harbor" becomes numbingly routine. Danny and Rafe hop into planes and start fighting back, cheering each other on with lines like "Hoo! Good shooting, boys!" -- proof that "Pearl Harbor," deep in its heart, really only wants to be "Top Gun," and that's good enough.

Even with all the grand dramatic flourishes of "Pearl Harbor," few of the actors make any significant impression. Affleck has the right jaw for a World War II fighter pilot -- upon hearing bad news he sets it into a cartoonishly hard line, a perfect caricature of the masculine determination you see on those period recruitment posters. But most of the time he seems to be playing a version of stolid masculinity that saps the charm right out of him. Hartnett, with his boyish squint, is too laid-back to register as much of a presence. And Beckinsale, with her creamy pale skin and wine-berry lips, is lovely to look at -- she just never throws off any sparks. (More appealing, as much for her looks as for any of her lines, is former fashion model James King: Her profile, with its upturned snub nose, looks as if it were lifted from a vintage Tillie the Toiler comic strip.)

Almost every actor here, many of whom have been dazzling in other performances, seems to have been swept out to sea by the allegedly huge, sweeping vision of "Pearl Harbor." Jon Voight is an earnest and gently heroic Franklin Delano Roosevelt, but his presence doesn't linger in one's memory. And Cuba Gooding Jr., as real-life hero Doris "Dorie" Miller, a Navy cook who jumps in to man a machine gun during the attack, has a role that asks nothing more of him than to look demoralized by his lowly station and then to glow with quiet triumph in his restored masculinity. He's too good an actor to waste his time with such comic-book heroics.

With "Pearl Harbor," Bay clearly wanted to make a picture more serious, and more significant, than "Armageddon." There's no getting around the fact that the subject matter is inherently grave, especially considering that quite a few Pearl Harbor survivors are still with us.

But "Pearl Harbor" is such a bloodless picture that it neither insults nor honors the memory of these soldiers. Less offensive than James Cameron's loathsomely calculating "Titanic," it's nonetheless cut from the same fabric, using its clever, high-tech tools to dress up a marketing event as real-life history. (It will be interesting to see how "Pearl Harbor" plays in Japan, where "Titanic" was such a huge hit; Touchstone has announced that it will revise the picture for release in Japan and Germany, in an effort to avoid offending audiences in those countries -- evidence that it's not such a small world, after all.)

But even if you simply take it on its own terms, "Pearl Harbor" is exactly the kind of prestige project you'd expect from a director like Bay, hitting all its targets with plodding precision and never once achieving surprise. It's as if he'd heard the term "History Channel" and interpreted it to mean deep, old rut. Bay digs in and just keeps shoveling.