We believe children aren't the future

Infertility makes us snide and courageous and sad. 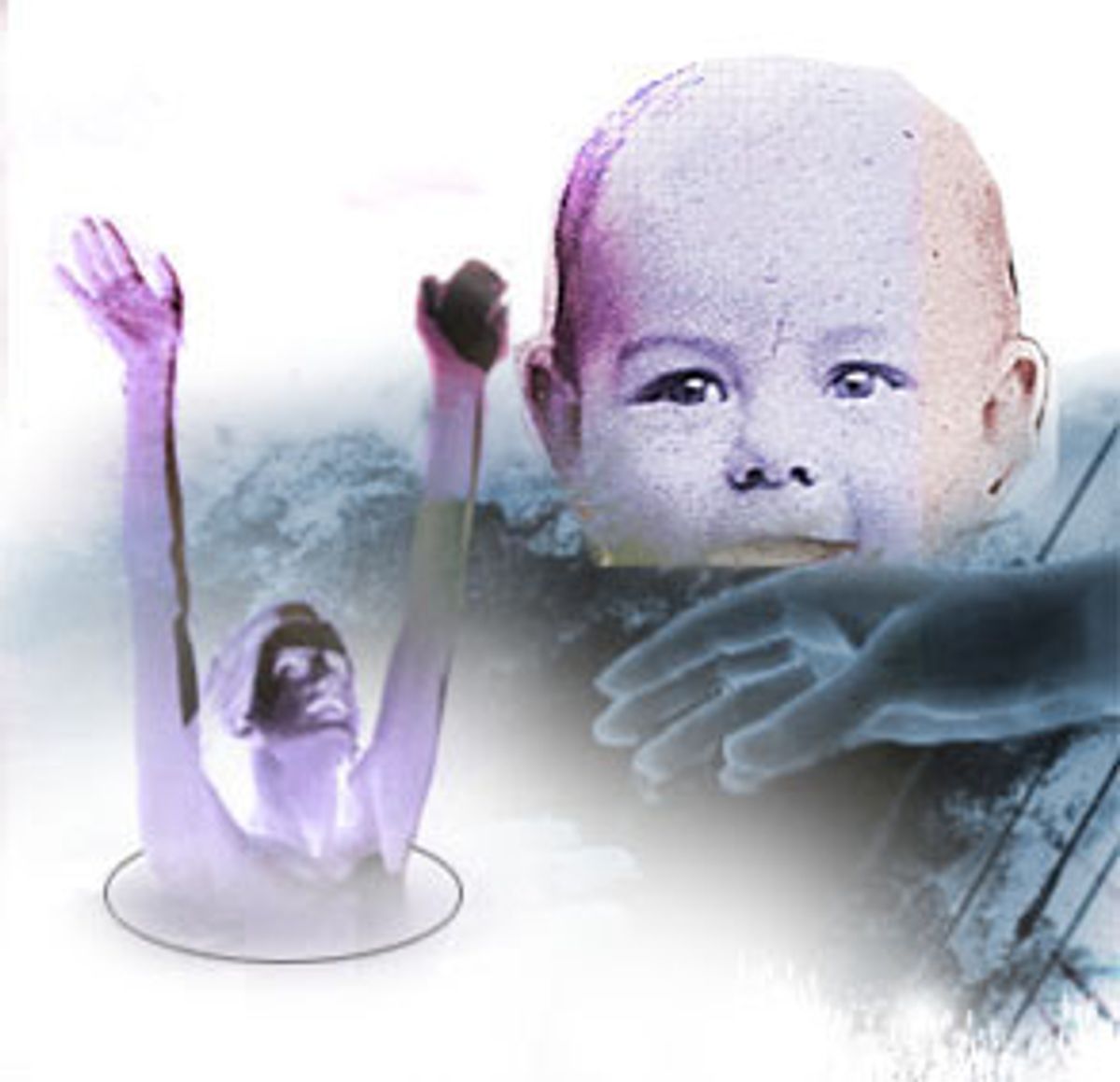 I'm lucky my house is so quiet. At least, that's what an old college friend, whose 4-year-old is testing upper octaves in the background, is telling me over the phone.

Envy? I have no idea how to respond, and the quiet in my house grows louder as she waits for me to say something. Anything. The pause is intentionally pregnant. I know she's waiting to hear the latest about my and my husband's tussle with infertility. But I somehow can't commit facts to words, again, as if speaking them will turn childlessness from a vague biological malfunction to a living emptiness. I do not want to conjure up unnamed ghosts.

I know she simply envies my empty airspace. I know that what she's hearing on my end of the line isn't quiet at all, but a reminiscence of her pre-parenting life. That time we were all young and lit by moonlight.

Instead of saying any of that, I change the subject, ask her about the new boat. It beats delivering the same tired response to the same covert question. My husband and I have been speaking the two words for years now: "We're trying." Each time I say this, the weight of colossal failure -- among life's biggest, the inability to self-perpetuate -- descends, a lactating Athena-size shroud of incompetence. My eggs do not play well with others. My husband's sperm is unfocused, not working up to its potential.

We are failed breeders, and having committed neither to accepting childlessness nor to enduring scary science feats or contemplating final-step adoption, we walk a no-mama's land. A no-papa's land. "My seed found no purchase," my husband says of our little savanna.

We still have a few years left in which to let low-tech fertility methods work. I take my temperature and eat zinc; he wears boxers and avoids bananas, per doctor's orders. But I foresee the years leading to a showdown with science as a surreal limbo, waiting to learn what the future holds and trying desperately not to care. We shrug, like Doris Day: "Que Sera Sera." What the hell. Doesn't matter anyway.

We play let's pretend. We tell each other we'd make surly parents anyway, now that we've had 10 self-centered years together without having to relearn our numbers or synchronize our driving for soccer pickups. In fact, we've had so many years of living without tykes that we'd probably compete with them, bickering over whether to watch Bravo or Nickelodeon. I would hide the remote and taunt their undeveloped reasoning faculties. We'd urge them to emulate their peers on "South Park."

They would be on their own. They'd learn to play with matches. Sleep in a pile under the stairs because we'd forget to give them a bedroom. Sell pencils for lunch money. We would beget "Lord of the Flies" children, savage hoodlums starved for love, direction and daily grooming.

This is what we tell ourselves. My husband, meanwhile, serves our 14-year-old cat, the household princess, her water in a wine goblet and tells me "she likes it better that way." At a restaurant, he wraps his arm around our 5-year-old nephew's shoulder and reads him everything on the menu. I hear them whispering to each other. "Are you sure?" my husband asks. Luke nods his head excitedly. "OK then." When the waitress arrives, the two of them look up toward her. My husband orders: "He'll have a thousand pancakes."

"No. He'll also have an ocean of syrup."

I push away from the table quietly, praying no one sees as I head to a bathroom stall. Maternal urges have no manners. They wake up and howl at whim. They need to be carried out of the restaurant to avoid a public scene, soothed in the privacy of restroom cubicles.

What a beautiful, beautiful father. It hurts to see this. To think of the quiet in our home that could be filled with the sound of a spatula making a child a thousand pancakes.

"It seems so wrong," my mother laments later when I tell her about the pancakes.

To her, our infertility is a cosmic-size iniquity. We grow quiet. We are remembering the futility of arguing with science. At least, I am. She, meanwhile, is measuring the world's injustices. Finding anecdotes with which to petition the Lord.

"I mean, look at Callie" she says. "She's a white cat mother. How can that be right?"

Ah, the white cat women. So many of them in the world. When I was 8 years old, my family moved to a new blue house that had been unoccupied. A white cat had made her home in the basement, delivered a litter and then abandoned the kittens. My mother nursed the tiny creatures with an eyedropper. Callie was like that white cat -- a woman who forgot her children. Left them with a temperamental drunk who probably fed them microwaved pixie sticks for dinner.

By offering up this information about Callie, my mother is trying to negotiate with unseen forces. She mentions how I sing to our golden retriever and plant sunflowers with a squadron of neighbor children, how my husband can play Super Mario with a 6-year-old cousin for hours -- evidence of what she sees as superior humanity and parenting aptitude. Maybe, because of my mother's lawyering, Zeus and his clan will revisit the issue, and transfer Callie's offspring to us?

I try to cheer up my mother. I tell her I'm not a fit parent anyway. In fact, I'm a secret crack whore.

"You're not a crack whore."

"Pregnancy might kick-start a latent mental illness that makes me want to injure small children with forks."

Nothing will pacify her. And so we talk about our prognosis, those embryo-defying topics. My mother finds hope where I see only obstacle. She believes, in her heart of hearts, the place where she believes God exists, that a baby will happen. She dreams of holding our baby.

Me, I can't go there. Hope is unthinkable because hope is a solid. It germinates and becomes a parallel-universe reality, something you can almost touch through the glass. My husband and I hesitate when we talk about babies. Sentences seem unfinished. It's as if we agreed, without saying, that to talk too loudly would conjure a dream that could break. A dream that, lost, could break us. We could summon a loss that would ask to be mourned.

It's much easier to be flip about children. When my husband and I meet people, it usually takes about three seconds after they give us the "you're a great couple" line for them to ask the inevitable question: "Why don't you have kids?" My husband has a pat answer. He says, "We don't believe that children are the future."

The pause that follows reminds me that people don't think anti-kid jokes are funny. These days, it's a form of blasphemy, much like mocking condoms and ridiculing recycling. Either that, or they see the edge of a lie in his eyes; they know that sarcasm usually masks pain, and they don't know how to respond. Laugh? Or flinch?

I know that feeling. Truth is, we do indeed believe children are the future -- just maybe not our future. So saith the gods of fertility, anyway. It's much less painful to give a flip response -- tell people that we were really, truly frightened by "Children of the Village of the Damned" -- than to haul out the dreams deferred, the medical charts and other evidence stacked against us. Low motility? Check. Endometriosis? Yep. Bad karma from a previous life? Certainly.

The sins of our parents? One of my aunts thinks it has something to do with the hormones they fed cows in the '60s. My grandmother felt it just wasn't time yet. Everyone has his or her theory about someone else's infertility. And everyone thinks it's OK to ask.

And we're just kind of ignoring it. Like a messy room that won't clean itself.

Either way -- whether admitting we'd like to cradle a tot but can't, or expressing faux irreverence toward the children of today, tiny Buddhas all -- we're outsiders in a baby-glorifying world, and we comfort ourselves by listening to the silence.

And I want to tell my friend on the phone that the silence she so envies would give her little peace. It is a quiet with its own growing vocabulary, a silence that howls at 4 a.m. I want to tell her about this silence, but I don't say a thing.

Lori Steele is a writer in northern Michigan. Her articles have appeared in a number of publications, notably the Detroit Free Press, where she has been a contributor since 1997.