The party is planning an out-of-state fundraising campaign that targets Jeb Bush and his role in the recount. 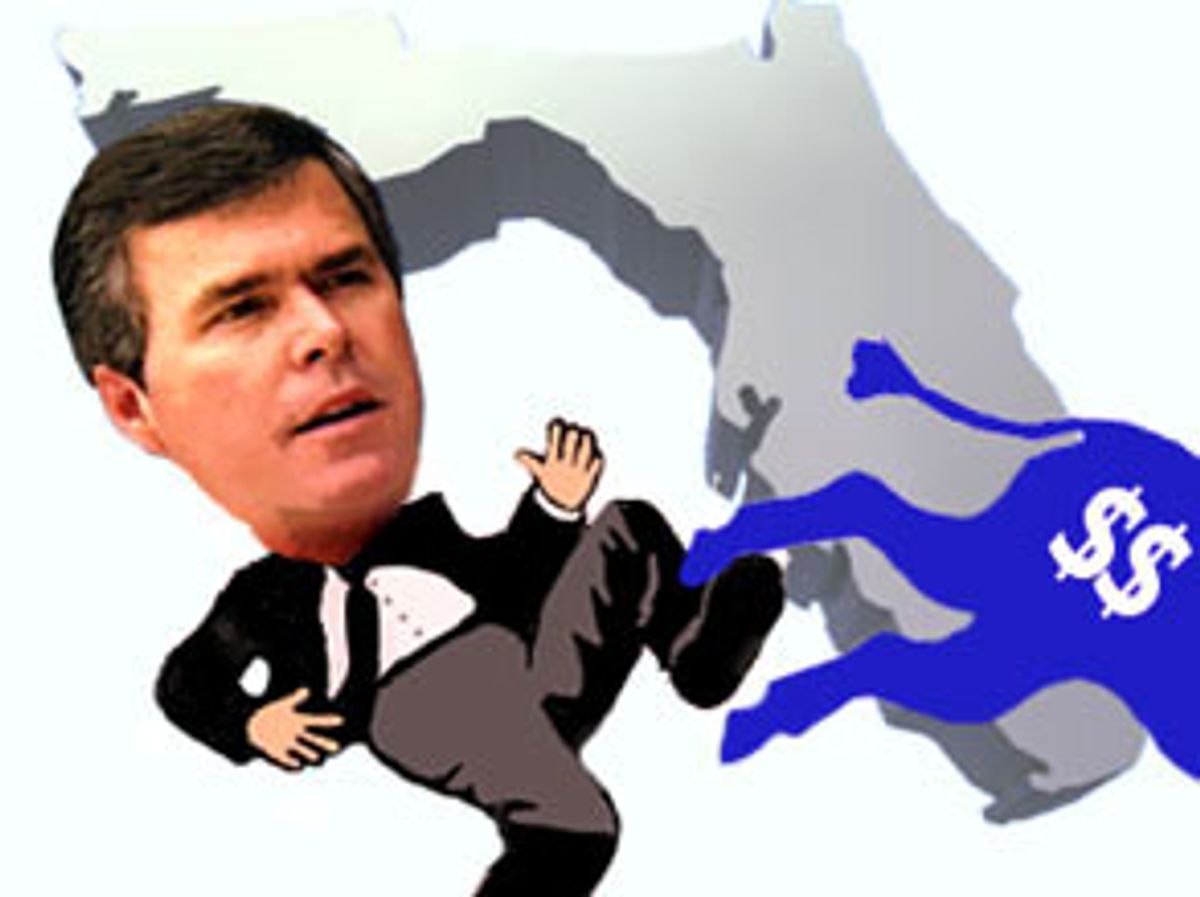 Punch card ballots have been outlawed in Florida. More Americans than ever before now know who sits on their "canvassing board." Filmmaker Spike Lee was in Washington on Monday, filming a short documentary about Election Night. And officials of the Florida Democratic Party hope last year's recount mess will have at least one other outcome: success for their unprecedented nationwide soft-money fundraising campaign to unseat Gov. Jeb Bush.

The Florida Democratic Party, Salon has learned, hopes to raise at least $15 million in its campaign to unseat Bush in 2002. For the first time in its history, the state party will be targeting donors in the other 49 states for at least half that sum. The campaign, called "Focus on Florida," will include direct-mail solicitations as well as a series of fundraising events throughout the country, kicking off on June 11 in New York with an event featuring Sen. Bob Graham, D-Fla.

The party's out-of-state fundraising will be run by the Competence Group, a Chicago company formed in January and run by David Rosen, who headed up out-of-state fundraising for the November 2000 campaign of Sen. Hillary Rodham Clinton, D-N.Y. Rosen said that Clinton raised approximately $20 million in both hard and soft money from outside the Empire State last year, and he hoped to raise anywhere from $7 million to $10 million in soft money for Florida Democrats for 2002.

News of the Democrats' new campaign seemed to catch the Florida Republican Party by surprise. "I had not heard that," spokeswoman Portia Palmer said. Calling back later after checking around the George Bush Building in Tallahassee, Palmer said, "We don't know anything about it. We don't have any comment until we know more about what exactly is going on."

State Democratic Party spokesman Bob Poe sounded positively giddy about what's going on. "This is the first time the Florida Democratic Party's ever done anything like this," he gushed, noting that the state GOP had pledged to raise around $40 million to keep Bush in the governor's mansion.

"People haven't forgotten," said Rosen. "People are energized. I'm getting a lot of that comment -- 'whatever I can do to help.'" While the name of the campaign -- Focus on Florida -- is positive, Rosen says, the motivating force behind the pending contributions doesn't have to be. "We want to capitalize on the emotions, period, positive or negative," he said. "What we do want is to realize something did happen in Florida and use that as a rallying point."

While the in-state campaign will focus on Bush's tenure as governor -- focusing on issues such as education, affirmative action, government services and the environment -- in the other 49 states "a lot of people's anger about what happened during the recount may come out," says Washington political consultant Nick Baldick, of Dewey Square Group Strategies, whom Florida Democrats have hired for political guidance.

At Dewey Square, run by one of the Gore-Lieberman campaign's pivotal election and post-election players, old-school Boston politico Michael Whouley, the campaign will be run by Baldick and another veteran of the Florida recount war, Karl Koch.

Asked for comment about the "Focus on Florida" campaign, a spokeswoman for Gov. Bush said that since the matter was a political issue, it should be directed toward the party.

Despite Bush's rigid firewall between policy and politics, it is precisely the role he played in the very political recount that Democrats plan to bring up to the party faithful.

"Out-of-state people will be very interested in Jeb's role in the recount," says Baldick, who was the Gore-Lieberman campaign's man on the ground in Tallahassee during the last month of the election. Asked to explain what that meant, Baldick said he would "leave it to the imagination." One item that Poe intimates will be used against Bush is the so-called scrub list of state felons to be removed from the Florida voting rolls. As was first reported by Salon, the list was faulty and often removed the wrong voters. Though election supervisors had complained about the flawed list for two years, no one in Jeb Bush's administration -- neither Secretary of State Katherine Harris nor division of elections supervisor Clay Roberts -- seemed concerned to many of these supervisors.

On Election Day 2000, hundreds, if not thousands, of Florida voters who weren't felons were told that they couldn't vote. The converse effect of this faulty list was that several counties didn't use the scrub list, and hundreds of felons thus ended up being able to vote. It is the former result, however, that the state Democratic Party will focus on.

"They knew that they were disenfranchising people that shouldn't have been purged from the rolls," Poe says. "You're not going to find that kind of thing happening in a Democratic administration." Other Democratic criticisms of Jeb Bush's actions during the recount will likely include the involvement of Bush and his staff in the machinations of the state Legislature while it was drafting legislation to award the state's 25 electoral votes to Bush-Cheney.

Poe says that Democratic polls indicate that the recount hurt Jeb Bush in Florida, too. "One of the things Jeb really had an advantage in was that in the past people did not perceive him as partisan," Poe says. "Research shows that, after what happened in the 2000 election, people now perceive him as much more partisan." While the results of last winter's recount mess were disappointing and depressing for Democrats, Poe says, "if you can say what's one of the benefits, it's that it clearly energized the party here. It's allowed us to be much more aggressive going into 2002."

Florida Republican chairman Al Cardenas has disputed the Herald poll, however, saying that it conflicts with internal polling that the state GOP has conducted.

Cardenas has also said that he would prefer that Reno be the Democratic gubernatorial candidate since she comes with so much baggage. One U.S. senator recently told Salon that Sen. Graham had told him that the state party was going to try to gingerly remove the controversial Reno from the race so as to increase its chances of recapturing the governor's mansion. Poe, however, denied having heard anything along those lines.