A writer gets to be a voyeur during a dominance party at the world-famous brothel. 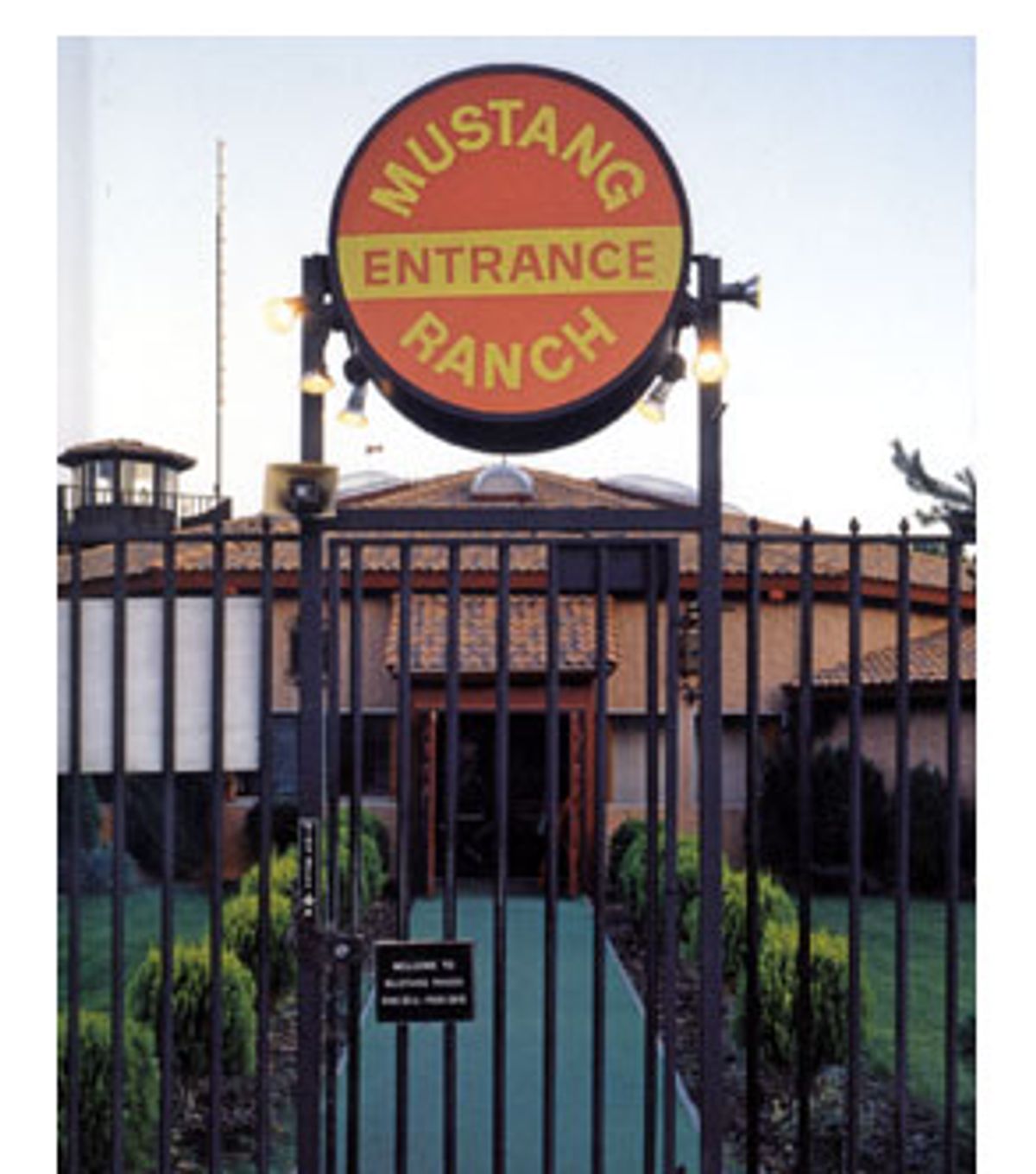 I'm still not entirely sure what motivated Baby to let me watch. She knew I was interested in the working of the industry and she had made it clear that she wanted to help educate me. More than that, though, she was excited about the idea of me watching her -- as if she wanted the validation of my seeing how skilled she was at satisfying her customers. While women sometimes did "doubles" (parties with a customer and two prostitutes, or ménages à trois) and could watch each other work, Baby had never had the opportunity to impress a curious outsider. She was eager to show off her talents as a prostitute and to be respected as a professional. Her excitement was moving, and I felt I had little choice but to say yes.

One night, Baby and I were chatting together in the parlor when Farrah, a working girl who looked eerily like Farrah Fawcett, crept up and whispered something into Baby's ear. Baby nodded and Farrah melted away as quickly as she had appeared. Baby turned to me and said, "Farrah has a guy who wants a dominance party. She doesn't know how to do the party so she's pulled me in." In brothel-speak, to be pulled into a party is to be included in a date with another woman's customer. It wasn't uncommon for less experienced women to try to pull in more experienced prostitutes like Baby, especially for specialty sessions like dominance.

Baby hesitated for a moment. "So, I was thinking, maybe I can pull you in, too." As she said the words, I felt a rush of exhilaration and terror that almost nauseated me. Who knew when I'd have another chance to watch paid sex between a brothel prostitute and a customer? And this was no standard party. Dominance was one of the kinkiest activities sold. I nodded my assent. I'd come this far. Baby stood up and pulled down her tight spandex dress. She told me to stay in the parlor until she had arranged everything. Under no circumstances should I mention the plan to anyone -- particularly Shelley the floor maid, who happened to be on duty and might fire Baby if she got wind of this.

Shelley was the ex-sadist who had bullied me my first day at Mustang No. 1. Although I'd made several visits to the brothel, I had yet to win her over. By now I had gotten used to her icy, suspicious stares. She had pulled Baby aside one day and told her to "be careful" around me; she accused Baby of divulging too many "industry secrets." The other women speculated that Shelley had a crush on Baby and was simply jealous of all the time I was spending with her. And in fact, when I finally confronted Shelley and asked her what she thought about me, she snarled, "I just think you're in love with Baby."

It was remarkable how often relationships became sexualized in the brothels. It was therefore no coincidence that both Shelley and I had been accused of lusting after Baby. While most of the relationships between women did have an unusual air of sexualized energy, very few of the prostitutes identified themselves as bisexual or lesbian. Although some women did have sex with other women in the brothel, almost all of them thought of themselves as heterosexuals who had merely been experimenting. "We are so isolated and lonely," said one women. "I think we start looking for comfort and affection anywhere we can find it." Frankly, I was surprised that liaisons between women didn't occur more frequently, especially given the intense, concentrated time they spent pent up together. Anyway, whatever Shelley's true motives, I had no intention of telling anyone that I might get to be a voyeur.

While Baby was gone, I sat on the couch, my mind racing. Maybe this party would take place in Mustang's dungeon, a windowless, closet-sized room at the back of the brothel equipped with metal D-rings where women could attach various restraints like harnesses, chains, and cuffs. Would the man go all-out for whipping and beating? I had heard the women talk about a customer who wanted to be shocked with a cattle prod and another who asked to be locked in a doghouse for over twenty-four hours. One day while sitting in the parlor, I had seen a man brought out naked, leashed, and on all fours, like a dog. As I mulled over the stories I had heard about dominance parties, it suddenly struck me that Baby had used the expression "pull you in" rather vaguely. I hoped she didn't intend that I participate. But Baby had also said they would probably blindfold the man, I tried to reassure myself, in which case he probably wouldn't even know I was in the room.

Baby reappeared about fifteen minutes later and told me to follow her discreetly down to Farrah's room. As she led me down the hallway, she said Farrah hadn't quite gotten it right. Rather than whips and chains, this man wanted, in his own words, "to be taken anally" with a dildo. He had had this fantasy for some time but was too ashamed to ask any of his girlfriends to do it. Baby said it would be their responsibility to make him feel normal and acceptable in having this fantasy. As I tried to absorb this, she dropped a bombshell. "The customer is all right with you watching," she said as we reached the door to Farrah's room, "but he won't be wearing a blindfold. He wants to watch you watching him." With that, she threw open the door to Farrah's room.

Before me lay a boyish-looking man in his mid-thirties, stark naked on top of the bed. (Most of the women prohibited customers from getting underneath their sheets and comforters and had them lie on a top sheet, changed with each client.) When the customer saw me, he broke into a wide self-conscious grin that made his entire face squish up like an apple-face doll. "This is the girl I was telling you about," said Baby. "She's in training here. She's just going to watch. Farrah and I are going to get naked, not her." I breathed a sigh of relief.

His name was Jack, he told me later, and he was an architect from southern California who was in town for a convention and had mustered up the courage to venture out to the Mustang Ranch after a few cocktails in the casinos. He'd never expected to stay, but when he overheard some of the women in the brothel bar trading stories about some of the kinky as well as conventional kinds of sex they sold, he decided to take the plunge. Since his teens, Jack had suppressed his fantasy for fear of ridicule.

He had picked Farrah from the lineup because she resembled one of the cheerleaders he had fantasized about in high school. Scared to put his desire into words, Jack became even more nervous after he had done so, when Farrah announced that she would have to check whether she could provide the service he wanted. Left alone in her bedroom, he considered getting dressed and scurrying out of the brothel to avoid the humiliation of being denied. But then Baby came in, having already assumed the persona of a dominatrix, and put him immediately at ease. Of course she knew what he wanted, she told him. He would just need to be a very good boy, or Miss Baby wouldn't give him what he deserved. She remained professional throughout the interaction, and in the process gave this man every indication that his sexual fantasy was normal and commonly requested. Her commanding but nonjudgmental demeanor permitted him to begin feeling aroused.

Undressed now down to a lacy black bra and a matching G-string beneath the strap-on, Baby spread open Jack's legs and let his knees hang off the bed before she began to penetrate him slowly from her standing position, her thighs pressed firmly against the bed. Jack winced as Baby forced the dry, condom-covered dildo into him, meeting significant resistance. (He had requested painful penetration.) Meanwhile, Farrah sat naked at the head of the bed, where Jack used his outstretched hands to play with her nipples while she occasionally slapped him across the hands. She looked uncomfortable in the twisted position necessary to give Jack access to her breasts and allow her simultaneously to observe what Baby was doing. With a better sense of Jack's tolerance for pain now, Baby began thrusting deeper into him, with the force of all her body weight.

"You like this don't you, bitch?" she roared, spanking him on the buttocks with an open hand. "You whore. You slut."

Intermittently, Baby took hold of Jack's testicles and squeezed them, making him yelp. Then she grabbed a tuft of his hair and yanked his head backward with a deliberate measure of control. She had achieved a perfect balance between violation and restraint -- a controlled dominance, if you will -- in which Jack felt safe enough to submit to the abuse willingly.

I noticed Jack's gaze in the reflection in the mirror. His self-conscious, goofy grin had evolved into a grimace that conveyed both his physical pain and psychological ecstasy. His wild eyes revealed his wonder at finally having his sexual fantasy realized in such a public way.

"Look at you beaming," Baby said contemptuously. "You like her watching, don't you? You think you're a little princess, don't you? You exhibitionist." While Baby said she saw him beaming, I saw him bursting with an electrified agony.

After almost 10 minutes, Baby flipped Jack onto his back like a helpless animal. As she started thrusting into him again, this time with his legs draped over her shoulders, she began brusquely rubbing his very erect penis with a free hand. Baby was a master choreographer, acutely sensitive to the exact degree and extent of dominance called for. Jack was now panting like a dog and it took only a few strokes before he let out a howl and ejaculated all over his torso. (Condoms were not always used for hand jobs.)

The room was still for several minutes. Jack lay motionless, with his eyes closed. Silently, Baby and Farrah began moving about, putting the room back in order. Finally, Baby roused Jack with a gentle tap on his shoulder and told him he could get dressed. When Jack stood up, he smiled sheepishly at the three of us. "Thank you, thank you," he said. "I never thought I'd have the courage to ask a woman to fuck me." I guess I must have looked appalled by what I had just seen, because he turned to me and said, "You look as if you need to lie down."

He was probably right. The experience was so intense and surreal, I was reeling. How would I ever explain this experience to my husband? I thanked Jack for allowing me to watch and excused myself, leaving the three of them to chat about his life in Los Angeles. No one saw me leave Farrah's room, and I sneaked back into the parlor. I tried to act nonchalant and normal with the other women, but it was a struggle. What I had witnessed was like seeing a human being splayed out on a bed with his guts exposed. It would take some time for me to assimilate the whole experience.

Alexa Albert, M.D. is the author of "Brothel: Mustang Ranch and its Women."