Is it Jenna Bush's problem or ours? 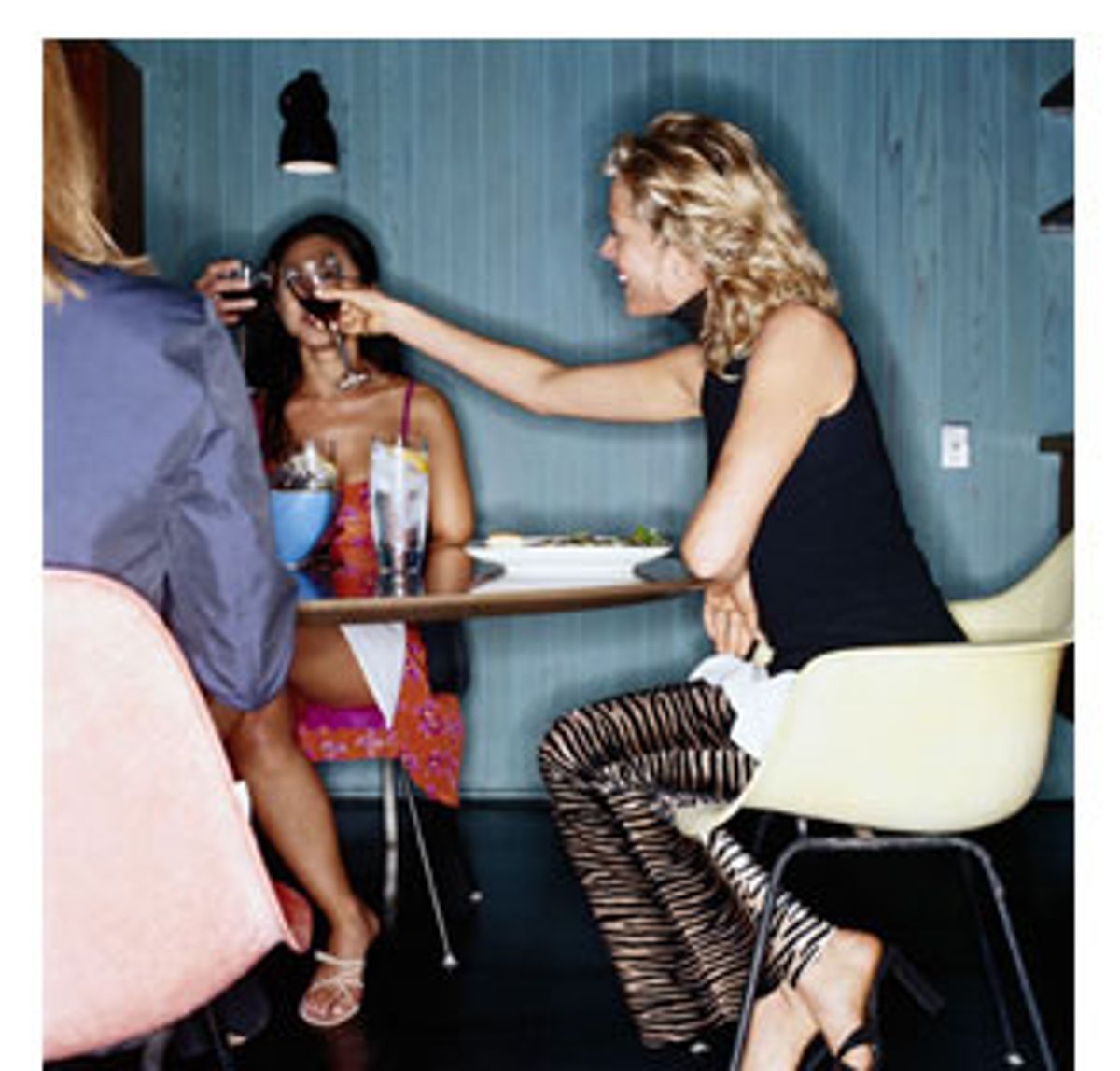 What must their parents think?

According to reports, Jenna and Barbara Bush, the 19-year-old twin daughters of President Bush, were caught trying to order drinks at a Mexican restaurant in Austin. It is the second time in less than a month that University of Texas freshman Jenna has been caught drinking underage. She pleaded no contest to a charge of being a minor in possession of alcohol after getting ticketed by police at a popular Austin nightclub. A judge ordered her to pay $51.25 in court fees and serve eight hours of community service, plus six hours of alcohol awareness training.

This is the first bust for Barbara, a Yale University student.

Police say the manager of Chuy's restaurant called 911 on Tuesday evening after minors -- allegedly the Bush daughters -- tried to order drinks. No charges have yet been filed, pending an investigation.

So, is this a big deal? In this country, drinking is illegal for anyone younger than 21, but the reality among American college students is usually very different. Drinking happens -- and no one expects the restaurant to call 911.

In Jenna's case, it doesn't seem to matter if college-age drinking might be considered normal or if our nation's drinking laws seem a tad unrealistic. Her brushes with alcohol only further her reputation -- in the press, at least -- as a "bad girl." And her father's admitted problems with alcohol have fueled speculation that Jenna might have inherited alcoholism. (This despite the fact that the president has never gone so far as to say he was an alcoholic.) And there is talk, as there often is in these cases, that Jenna's reckless behavior reflects a lack of good parental guidance, and that she might be acting out.

White House spokesman Scott McClellan declined to comment to the press on the incident. "If it involves the daughters in their private lives, it is a family matter," he said.

Adolescent psychiatrist Lynn Ponton agrees. Ponton is the author of "The Sex Lives of Teenagers: Revealing the Secret World of Adolescent Boys and Girls" and "The Romance of Risk: Why Teenagers Do the Things They Do." As a practicing therapist at the University of California in San Francisco -- and the mother of two teenagers herself -- Ponton is familiar with all kinds of risky behavior among teens.

Ponton laughed when she heard that the Austin restaurant manager had called 911. Minor offenses like underage drinking are best viewed as risk-taking, says Ponton, a process that adolescents need to go through in order to grow into adults. Whether the risk-taking is ultimately healthy or harmful for a child depends in large part on the guidance teenagers get from the adults in their lives.

Ponton spoke from her office in San Francisco about teen drinking, fake I.D.s and the role of parents in the risk-taking behavior of their children.

Would you say that Jenna Bush is taking some risks by drinking?

It's normal for kids to experiment with alcohol in our culture. Many cultures, European cultures, actually begin with exposure to alcohol in the home and then gradually introduce children and teenagers to it until they gain some familiarity with it. Our culture has a very limited expression of it and we're even trying to postpone the drinking age later, 21 in all our states currently.

But now we get to risky behavior. Jenna Bush has already had an arrest related to alcohol. This is a pattern of risk-taking behavior, and even though it's typical -- and it is typical of adolescents -- again, it makes us think about the importance of parental risk-taking patterns. We know for a fact that her father had a long history of alcohol use and abuse. And this is an opportunity for the parents to talk honestly with their children about risk-taking and really provide guidance and increase communication.

This is an opportunity for the Bushes to have this type of conversation. And I wonder what type of communication is actually taking place.

President Bush has never come out and said that he was an alcoholic. He said that drinking started to compete with his affections. Would there be any value in him, either publicly or privately, addressing that question again?

I think privately it's important, if your children know about your problems with risk-taking, that you tell them first that we all make mistakes so that they understand this. And you don't have to tell them the details, or they'll try to compete with your risk-taking. But it's important to emphasize that you made mistakes and what you've learned from them.

Many parents fail to talk about their own risk-taking; they actually hide it from their kids. And they lose this valuable opportunity and they see it repeat in the next generation. So I think Bush has an opportunity now.

I would actually prefer he do it privately. This is a private matter. It involves his two daughters. It involves an opportunity for him to have this type of discussion. And he's not alone; this is a problem that parents with teenagers are facing all over the country.

Is the public scrutiny of this behavior -- his and his daughters' -- unfair?

Having watched what happened with our last president's risk-taking, I don't think it's any different. We're a Puritan country still, and we cast a moral eye on our leaders, and we expect them still to be perfect. I think it would be better if we recognized that everybody does make mistakes. Bush's office could either say "no comment" because this is a family matter, and we would understand that, or he could say, "I am taking care of this in a private and family way and think it's very important."

But what I'd also like to see from Bush is that he take an active interest in adolescent risk-taking issues in our culture. Currently there is a report on adolescent risk-taking and sexuality that the surgeon general's office has not been allowed to release. The report was called "Call to Action" and Bush's administration has delayed its release.

From what we know, this report indicates that we need to continue to look particularly at sexual risk-taking -- and other kinds of adolescent risk-taking -- very seriously. I believe that one of the reasons this report has been delayed is because Bush emphasizes no conversation; and he emphasizes abstinence-only programs.

And this report advocates something different?

Absolutely, that's what we think. He's suppressing this report.

This brings up another incident that came up in the press -- that Bush had been convicted of DUI and had done community service, but that he had not discussed this with his daughters until it was uncovered by the press. He said he didn't want to talk about it with them because he didn't want them to make the same mistakes he did.

This is the issue, where a parent refuses to talk about any part of the risk-taking. I don't think he has to talk about the specifics -- he doesn't have to brag about how much alcohol he drank. See, it's the bragging that kids respond to and then imitate, when they think they're going to go one better than their parent.

But I think honestly informing them about what the behaviors were, about some of the feelings about them and, most important, about what you learned from them, is crucial. If you learned, for example, with respect to drinking, that it affected your work for five or six years, that you weren't as alert -- these things are important to disclose. Or if you have a family history of alcoholism -- that is another important detail to disclose. In my own family, there are some significant problems with alcohol. My two teenage children -- I also have an 18-year-old daughter -- are well informed about this problem.

There seem to be a couple of different issues in play with the Bush daughters. There's the drinking itself, and then there's the amount of scrutiny that they know they're under. Are they acting out?

I'm not so sure they're doing it because they're under pressure. My best guess is that this is a pattern that had begun a while ago. It's also age appropriate at 18 -- you're going to try to use the fake I.D.s at 17, 18, 19. Kids leaving for college take fake I.D.s with them now.

I think it's very hard to be the child of a famous person. That is a risk for both of these girls. That's why I said that this behavior we're seeing is really normal adolescent behavior. It really opens up a question much more about how the parents are going to respond to it.

Remember that these girls are going on dates. The Secret Service is there, [but] they're not calling [911]. On some level they're looking aside while these girls are doing this. So it is complicated and difficult to be the daughter of a president. But I think we can all respect their privacy.

I don't think it's any reason to condemn them or their behavior. I'd say, if anything, we can learn.