The sex goddess chats about her loves, kissing Tony Curtis and her friendship with Henry Kissinger and the Kennedys. 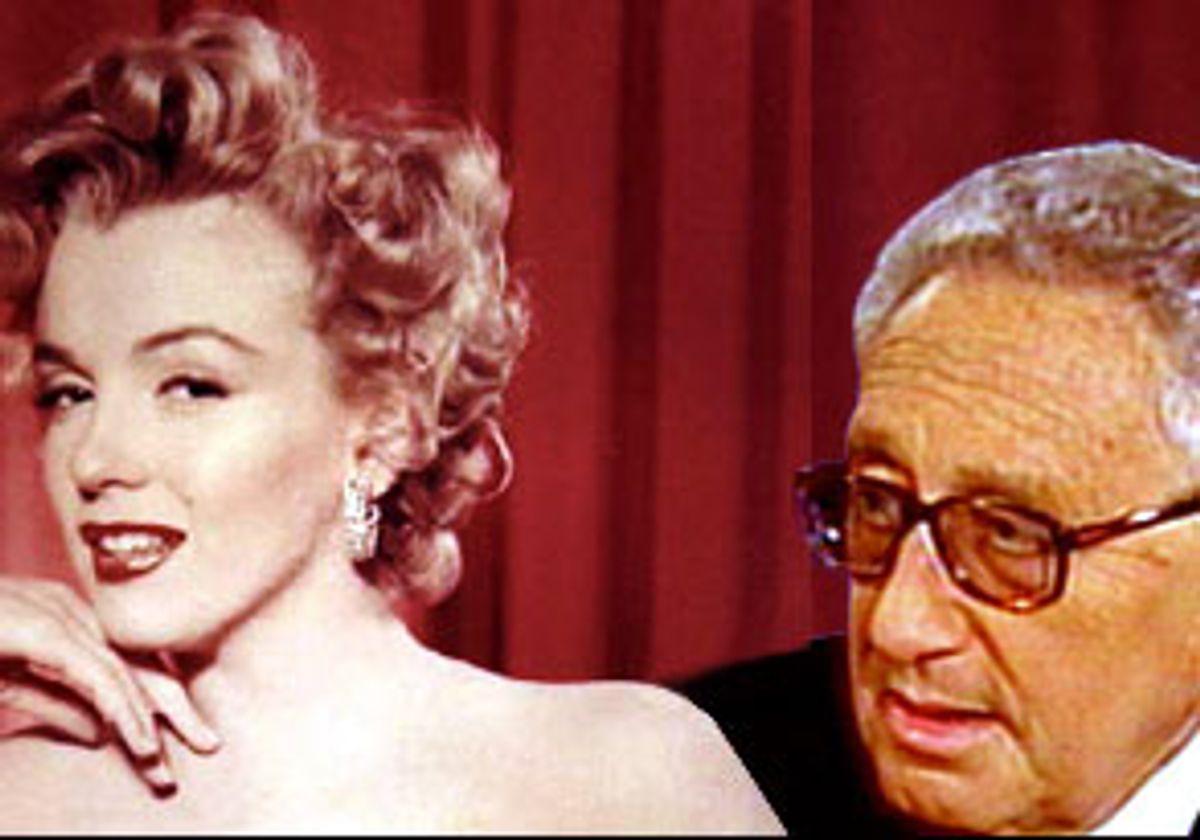 On Friday Marilyn Monroe would have been 75. In recent decades, she has been an elusive interviewee, but sometimes electronic media can penetrate farther than others. This conversation took place in her lovely home (we agreed not to disclose its whereabouts), with her companion, Dr. Henry Kissinger, never too far away to miss what was going on or to be powerless to offer the odd grunt of advice.

Miss Monroe, it's been a long time, but I hope you know how fresh you are still in the memories and imaginations of us all.

You are so darling. Henry, did you hear? (whispers) He's a little grumpy. There's this awful book about him going around, you know? About his trial. He was never even charged! I told him books, schnooks, no one reads. But he's from an older generation, so he worries.

No, I won't do that. My heart's with George.

Hamilton. He's always my guy. You know, it's a remarkable thing, but both the Kennedy boys, the last thing they told me, was to stick with George. Because he is kindness itself, and he doesn't change.

But you and George aren't married?

He has his career still. I don't want to be an impediment.

No, you know, I decided, I saw the light -- it really upset me too much. Working, I mean. With a lot of people, I don't think it's good for us. And when I was really ill, in '62, you know who called me? It was Garbo! Can you believe that? And she said, "Monwo," just like that, "You should withdwaw." I can still hear her.

Did you ever meet Miss Garbo?

Unnh-unnh. But we talked on the telephone all the time. And she told me, get yourself a lawyer and get a percentage of the exploitation. Because you're gonna be exploited. And that's where Henry was so helpful. Does he know lawyers.

I wonder, you did mention the Kennedys yourself.

I knew it! You gotta ask, right? Well, with Jack, I did the other thing a few times -- 'cause he was always on the phone. And he came like a snap of your fingers. Like a college boy. As for Bobby, he just wanted to know what Jack had done. And he was crazy for Sinatra stories. I don't recall that we ever did anything else but talk about Frank.

And their deaths? Can you tell us anything about that?

Bobby is dead? Henry, you never told me that. [Grunting is heard from the background.]

Oh, that is horrible. That has spoiled my day. Bobby was such a sweet kid. I mean Jack was another thing. Frank said Jack was part of the deal. It wasn't personal, at all, just business.

I try to take it easy. And, I mean, if you've been in the papers as much as myself, you never can believe a thing. Right? So I read a lot of the Russian stuff, still, like Mr. Strasberg taught me.

Do you still think of playing Chekhov or Dostoyevsky?

Oh, only in my bathroom, honey. But a lot of people do that, don't they?

Which of your old movies do you most like?

Oh, they're shit, really they are, most of them. But I see "Bus Stop" sometimes. I like my skin in that.

And do you watch new movies?

They still make them? I had no idea. I'd have thought folks would get over them before now.

And what do you feel about being a sex goddess?

Oh, terrific. I always loved that. It is the best thing to be. Being any sort of god is the best. Especially when you don't have to have sex anymore.

Did you actually enjoy sex?

Just ruins your makeup is all.

Did you ever talk to Joe in later years? Or Arthur Miller?

Joe never talked. It was his best quality. And I let Arthur concentrate on his writing.

Who are the most impressive men you've ever known?

Oh, well, apart from George and Henry and Mr. Strasberg, I would have to say Henry Havlacek in 10th grade.

Could you give us some idea of what your average day is like now?

Gee, I don't know. They come and they go. I sit in the shade. That is such a smart question.

Do you believe in the afterlife?

Finally, on "Some Like It Hot," there was a report that after the long kissing scene with Tony Curtis, he said that kissing you was like kissing Hitler. Do you have any comment?

Listen, buster, the only good kiss he ever gave was to the mirror!