Her latest role, in "The Man Who Cried," casts her as a Jewish refugee during World War II who has a hot thing with Johnny Depp. 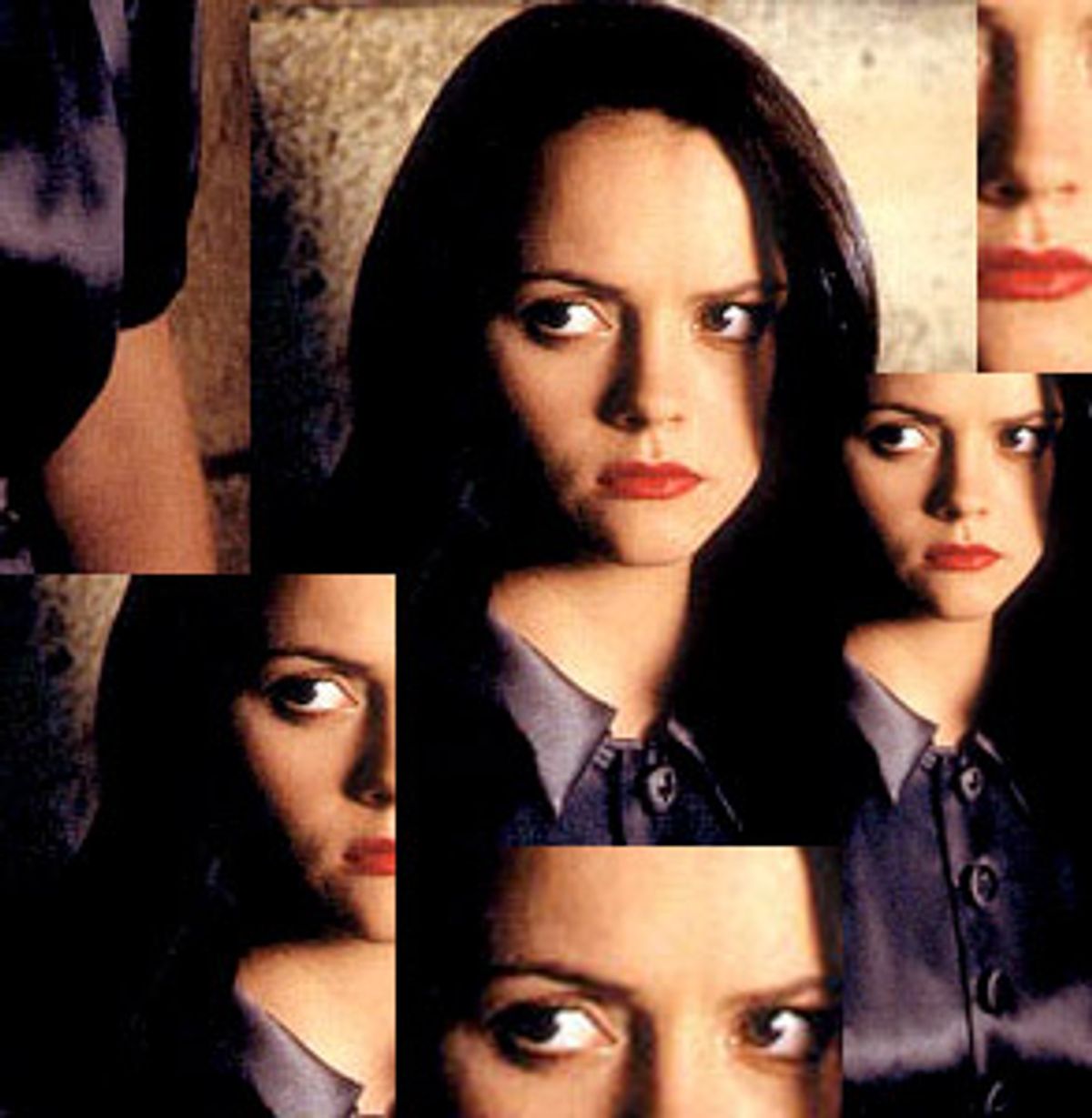 Christina Ricci looks like she stepped right out of the cast of "Lord of the Rings." With those big, spooky eyes of hers and a pair of little Vulcan ears that stick out when her hair's bobbed, as it is today, it seems as if Ricci would've been a natural for a hobbit, an elf, something.

Still, the star of "The Ice Storm," "Sleepy Hollow" and numerous indie hits like "Buffalo '66" and "The Opposite of Sex" has plenty on her platter, even without a gig as Frodo's love muffin. With several movies in production, including the film adaptation of Elizabeth Wurtzel's bestselling memoir, "Prozac Nation," it's easy to forget that Ricci just hit 21. She may have the C.V. of a seasoned Hollywood actor and her own production company, Blaspheme Films, to boot. But she doesn't appear to have aged much since Disney's '97 remake of "That Darn Cat."

In her latest effort, "The Man Who Cried," directed by Sally Potter, Ricci ventures into relatively adult fare, playing a Jewish refugee from Russian pogroms in pre-World War II Europe. Her costars in the film are Cate Blanchett, John Turturro and Johnny Depp, as the Gypsy horseman she falls in love with.

In this film, your character, Suzie, is not exactly overloaded with dialogue, especially when compared to Cate Blanchett's character, Lola. Do you have a preference between working with a lot of dialogue vs. a little?

I'm much more comfortable with silence. I don't like a lot of talk unless there's a very good reason for it. I just did a movie, "Pumpkin," which my production company, Blaspheme Films, produced, and there's a lot of very specific dialogue in a very affected way of speaking. That makes sense to me. But people don't necessarily go around every second expressing how they feel all the time with words. We express how we feel through actions and things subconsciously that we're not even aware of. So for me to verbally express to you how I feel is like kicking a dead horse.

Suzie seems far removed from your own experiences, growing up in Southern California. Did it require a lot of research on your part to play her effectively?

No. To be honest, I don't usually do very much research, especially if I'm working with a director who also wrote the screenplay. They've usually done a ton of research. And they'll tell you about it from their perspective, which is better than doing your own research, because they'll present to you the information they want conveyed in the film. What you feel is important may not be what the director feels is important.

You're not concerned that your body language will be out of touch with the period the film's set in?

That has a lot to do with casting. A director should cast a person who fits into their script. You can consciously do a lot of that stuff, but for me if I do that, it's going to seem false. If as an actor reading the script I don't get the character and can't play it without a huge amount of effort, then I probably shouldn't be doing that part. Naturally, my body language changes given whatever environment I'm in. Obviously, I felt I understood enough about this character from the screenplay to do the part.

Why did you take the role in "The Man Who Cried"? Did the fact that it's a more "adult" part enter into it?

Not really. I feel like I've been playing characters that are the age I am when I'm playing them for a long time now. I'm in no big rush to play "real" adults. I'm 21. I'm not itching to play 26. I took this role because it was different from anything I'd done. I felt like it was a chance to do straight drama, and to play a character who's kind of sad. I haven't played a teenager in a while. Maybe you could buy me as a teenager, I don't know. For the most part, I'm playing college age these days.

This character and other characters you've played have often been outsiders for one reason or another. Is there any connection between the characters you choose and how you perceive yourself?

I don't think I'm an outsider at all. I'm a successful actress who lives in Los Angeles. It would be horrible for me to be like [affecting a highfalutin accent], "Yes, I'm plagued." [Laughs] I've been incredibly lucky in my life, and I don't at all feel like an outsider.

Since I was a child, I've always been equipped to do this job, for some reason. The mentality I've always had since I was a kid was one of being able to deal with a lot of pressure, by not even comprehending that it is pressure. I've never taken anything that seriously in my life. A lot of that is the fact that I've always had a very easy life. But this character does have to learn to take things seriously, in a reasonably short period of time. She comes to really understand what's going on around her, and where her place is and what's happened to her in the past.

You're reunited in this film with Johnny Depp, who was your costar in Tim Burton's "Sleepy Hollow." What was it like working with Depp again?

It's kind of like in high school -- if there was one person you always had in class with you for some reason, after four years of being in class with them, you would sit next to them and everything was comfortable and they knew your habits really well. It's that kind of thing with Johnny and I. We each know how the other works. We like each other. We have fun together. It's really more of a working relationship, which in some ways is more valuable than a friendship.

Did that make doing the love scenes with him awkward?

Actually, that's where it really helped. He and I managed to laugh at those scenes because they're kind of odd and violent. They'd call "Rolling," and he'd say, "OK, you ready?" Then I'd say, "Sex in five, four, three, two, one." He'd call himself a pedophile and I'd say, "Yeah, you are." When I met him, he was 27 and I was 9. So it is getting into creepy-old-man territory. But there's no sexual tension between us whatsoever. So we just had fun with it. Anyway, I don't think you ever really deal with sexuality on-screen. There are, like, 50 people watching you, and you're just, like, "Uh, I hope my ass looks good." There's no deep feeling there. It's just embarrassing.

Your upcoming film, "Prozac Nation," from the book by Elizabeth Wurtzel, is "eagerly awaited" as they say. What's the status of that film and what drew you to that subject matter?

We had some reshoots I did last weekend, and they should be finished in the next two or three months. And then God knows when it's coming out. The book was amazing. When you think about clinical depression, one of the main problems that people who suffer from this have is that it's not an illness that's easily explained to people who don't suffer from it. It's that thing we've all heard a million times -- of how you just can't shake it off and keep going. And people don't understand that fully. The author managed to make you feel depression, the headiness, the weight, of it. Afterwards, you can understand it, I think, at least a little bit better. So I thought if we could do that with a film, that would be amazing.

Is depression something you've experienced yourself?

This is a real person's story. This is what Elizabeth Wurtzel went through. She was so eloquent in telling her story but also in giving you a kind of perspective where you can see all of the bad things about her as well as the good things.

That's not what I was getting at. You've spoken in other interviews about going to therapy and being prescribed Wellbutrin --

[Interrupts] You were trying to find out if I've ever suffered from clinical depression, and I was avoiding the question. I feel that talking about my experiences takes away somewhat from the story of the film. I suppose at some point I'll do a big exposé interview about it. I will say that "Prozac Nation" was a difficult film for me -- it was not a happy character.

Is it true you shot your first nude scene for "Prozac Nation"?

People ask that like I was tied to a chair while all my clothes were stripped off me. But yes, that's true. The director and I had decided that a nude scene was important for the movie. The movie itself is so exploitive of me. "Exploitive" has such a negative connotation, but there are some situations in which you exploit everything that you have, and I did for that movie. So for me, it was like, why not exploit me physically as well?

And yet both you and Depp are totally clothed during the sex scenes in "The Man Who Cried."

Right, because in Gypsy culture nudity is considered obscene. So even a man and his wife would not take off their clothes when they had sex. It's considered to be disrespectful to your own body. So you keep yourself covered.

Do you get annoyed with the press -- with our stupid questions?

This may seem surprising, but I'm a shy person and sometimes that's misinterpreted. I've been doing press since I was about 9, and I think I've always dealt with the press in a similar way. Certainly, at other times in my life, I probably came off as more defensive or a little strange. People say silly things. You're bound to get some stupid questions. Then you just react.

When I was 13, I was doing the international round tables for "Addams Family Values." This one woman asked me if I'd gone through puberty yet, and if I had gotten my period. And of course, me being a little smartass, I was like, "No, I'm going through menopause." [Laughs] But still that sticks with me. I was like, "I'm 13, you're asking me about my period?" Fortunately, I come from a very sarcastic family, so that's usually how I deal with it.

Why did you name your production company Blaspheme Films?

It comes from the fact that people decided that's what I was without knowing me -- just the idea that you take something that's outwardly offensive and you think that it really is offensive all the way down to its core. It's just a word. Like God really cares what we say as opposed to what's in our hearts. So I've always thought that blasphemy was a ridiculous concept, but that's of course me being a really obnoxious teenager. I named it when I was, like, 17, so I was like, "Ha," and took out my soapbox.

Now that you're producing as well as acting, will the next step be directing?

When I was younger, I didn't like the idea of having any responsibility. I liked being an actor because I liked acting, but also because if a movie was horrible, no one ever blames the actors. With producing you take a little more responsibility, but with directing, you're screwed if the movie sucks. I'm still kind of safe with producing. I don't think I'm ready for the kind of trauma that comes with directing.