"What's the Worst That Could Happen?"

I don't know when a bad movie has made me laugh as much as this heist farce did. 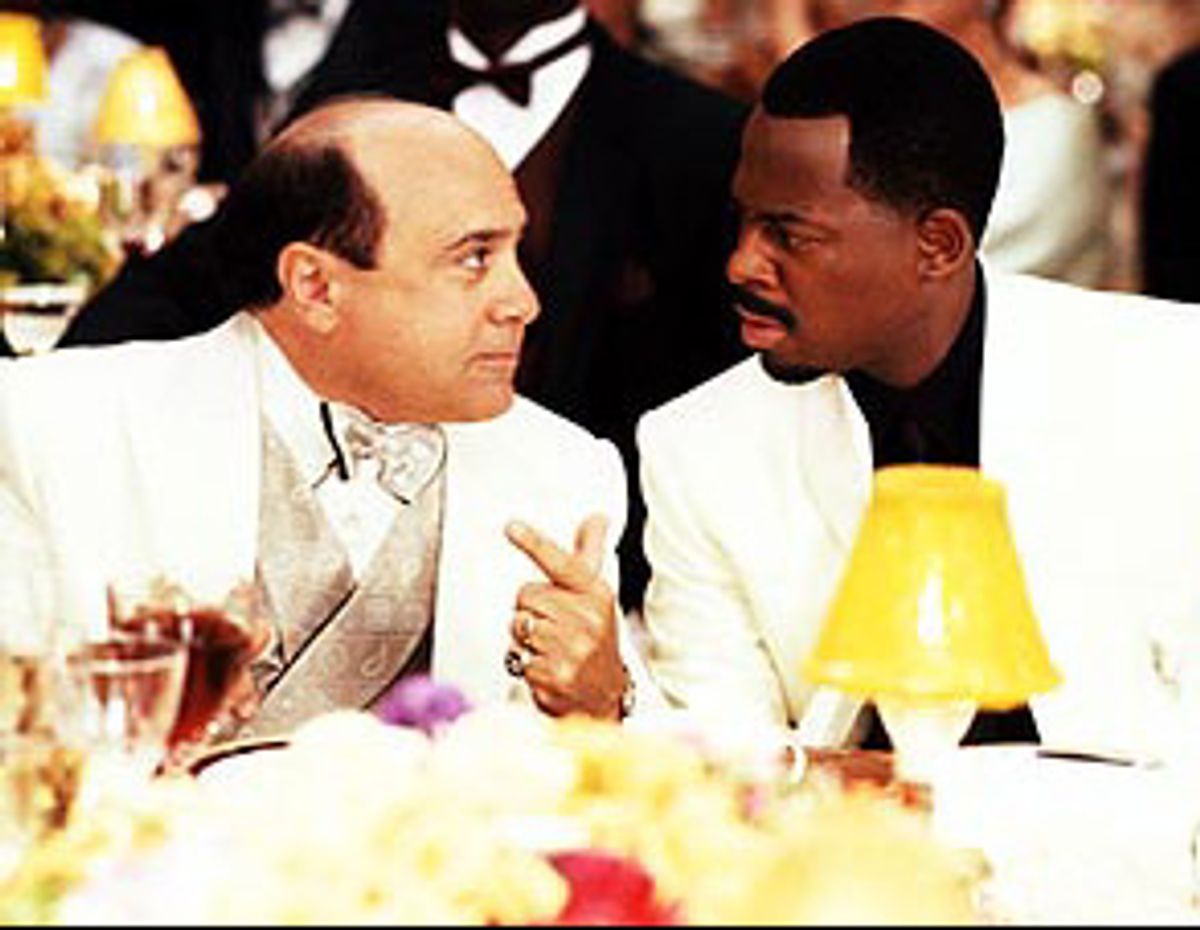 Boston has never looked so good on-screen (and maybe in person) as it does in "What's the Worst That Could Happen?" It's as hard to capture the city's visual beauty as it is to love the place. But cinematographer Anastas Michos turns in a breezy little love serenade to the Hub. The brownstones fairly glow, and the greenery of Beacon Hill and the Public Gardens sparkles. One part plumminess to two parts travel-brochure allure, the look of the movie presents the city as a tourist's daydream, quaint but not stodgy, intimate but not provincial. You know you're in a fantasyland when you see a black man enjoying the sidewalk cafes of the Back Bay without anyone raising an eyebrow.

The man is Kevin Caffery (Martin Lawrence), who has an eye for the finer things and puts it to use in his occupation as a thief. "What's the Worst That Could Happen?" is the story of the epic pissing contest that Kevin gets into with Max Fairbanks (Danny DeVito), a multimillionaire about to enter Chapter 11 bankruptcy. Catching Kevin breaking into his mansion, which is about to be auctioned, Max not only calls the cops but filches Kevin's lucky ring right off his finger, claiming it belongs to him and was part of the thief's intended swag. The arrest is no problem for Kevin. The ring is another story. It was a gift from his new girlfriend, Amber (Carmen Ejogo). And the revelation that it was taken by an intended mark who turned the tables on Kevin is just too irresistible to his cronies. So, finding himself a laughingstock, Kevin sets out to get the ring, and to rob Max of everything that isn't nailed down in the process.

"What's the Worst That Could Happen?" originated as one of the comic mysteries in Donald E. Westlake's Dortmunder series, which are probably the most entertaining shaggy-dog tales any mystery writer has come up with. Dortmunder is the thief as working stiff, the guy whose great plans never quite work out, and whose foolproof jobs are the gateway to increasingly complicated capers. You read the Dortmunder books and think, "This would make a hell of a movie." But Westlake's particular brand of humor -- ambling and full of malapropisms, casually tossed-off wiseass remarks and calm discussions of the most improbable situations -- is hellishly difficult to translate to the screen. Many have tried. By my count, Lawrence is the fourth or fifth actor to have played Dortmunder (in a group that also includes George C. Scott in "Bank Shot" and Robert Redford in "The Hot Rock," probably the funniest film made from a Westlake novel).

You can see all the difficulties of adapting Westlake in "What's the Worst That Could Happen?" You'd need an absolute master of offhand comic timing, of jokes that just slide by, someone who can deliver gags so that they land between the deadpan and the winking, someone who knows the difference between saying funny things and saying things funny, to fully capture Westlake's tone. (Think of an American Bill Forsyth and you're close.)

Most comedies build to a big climax. Dortmunder stories are more like the sounds you might get out of someone who's collected a bunch of party noisemakers and starts testing them out one after the other, repeating the same patterns and always adding a new one at the end. They're like a medley of "We're in the Money" and "One for My Baby (And One More for the Road)" played on a kazoo.

The director, Sam Weisman ("George of the Jungle"), is trying for a relaxed, nonchalant feel and instead he ends up with sputtering pacing and scenes that haven't been satisfyingly shaped. It's as if he's mistaken a bunch of tall tales for an adventure yarn and never makes the necessary adjustment for a rising and falling pace instead of a continuously escalating one. When he attempts a complicated sequence, like Kevin needling Max over the phone while Max appears before a Senate committee (the senators think the abuse Max is doling out to Kevin is directed at them, and the C-Span sign-language translator provides appropriate gestures), you're conscious that it's the editors, Garth Craven and Nick Moore, who've given the scene its Ping-Pong rhythm.

Lawrence doesn't go in for his full-throttle, wide-eyed, wise-mouthed shtick. He's not enough of a schlub to be the perfect Dortmunder. (My vote is for George Clooney, needing a shave and short on sleep.) But Lawrence serves the material instead of himself and he gives what, for him, is a toned-down -- but still funny -- performance. He's ingratiating without trying to be adorable. Danny DeVito's Max Fairbanks is a throwback to the evil little schmuck routine that DeVito used to play, before he moved beyond it with performances like the one he gave in "Living Out Loud." But when he works up a full head of steam, as when he's cursing out Kevin while testifying to a Senate committee, it's hard not to laugh at him.

The real life force of "What's the Worst That Could Happen?" is the amazing collection of second bananas who stroll through and goose things up. Some of them, like Nora Dunn as Max's suspicious wife, barely have roles. Others, like Glenne Headley, who plays Max's tarot-card consultant and whom Carole Lombard would have recognized as a kindred spirit, turn up in the movies so seldom that you want far more of them. But nearly everyone else gets a few prize moments, like growling, pop-eyed Bernie Mac as Kevin's uncle (who also happens to be his fence); Larry Miller, with his obliviousness that's both bland and gung-ho as Max's head of security; and Lenny Clarke and Siobhan Fallon (who does the only good comic Boston accent I've ever heard) as a team of bickering husband-and-wife crooks. Watching them is like seeing Maggie and Jiggs join the Irish working class.

As Dortmunder's accomplice, John Leguizamo doesn't get far in his straight scenes. But when he gets to dress up and act silly, donning a makeshift burnoose to play the interpreter to Lawrence's phony sheik, or assuming the role of a monocled German auctioneer and peppering his speech with scatological double talk, he approaches loony bliss. Most amazing of all is William Fichtner as Boston police detective Tardio. With a bleached blond wig and enough makeup to recall Helmut Berger as he was swanning about in various Luchino Visconti pictures, Fichtner damn near walks off with the movie whenever he appears. Costumed in an amazing series of Euro-swish outfits -- tapered suits with shirt, tie and jacket lining all sporting the same pattern -- Fichtner sails through his scenes with demented aplomb. Nothing Fichtner has ever done suggests the wildness of his performance here. He plays the Boston detective as a seemingly gay (but who can tell?) Italian-monickered gigolo. Fichtner doesn't camp it up; he just plays the whacked concept as, you should pardon the expression, straight as possible.

I don't know when a bad movie has made me laugh as much as this one. Most of the gags are vintage silliness: foreign double talk, characters donning funny costumes, well-timed profanities. And some of them are so quick they just breeze by and catch you on the rebound (like Lawrence as a radical, hugely Afroed lawyer who is said to be from the firm of Whiteman, Small, Johnson). But the actors seem to have fallen into the business of making people laugh as naturally as Lawrence's Kevin has fallen into thievery. Who'd want to work when you can do this?