In defense of Andrew Sullivan

Whatever discrepancies exist between his public words and his private actions, the attempt to smear him sexually is a vendetta masquerading as journalism. 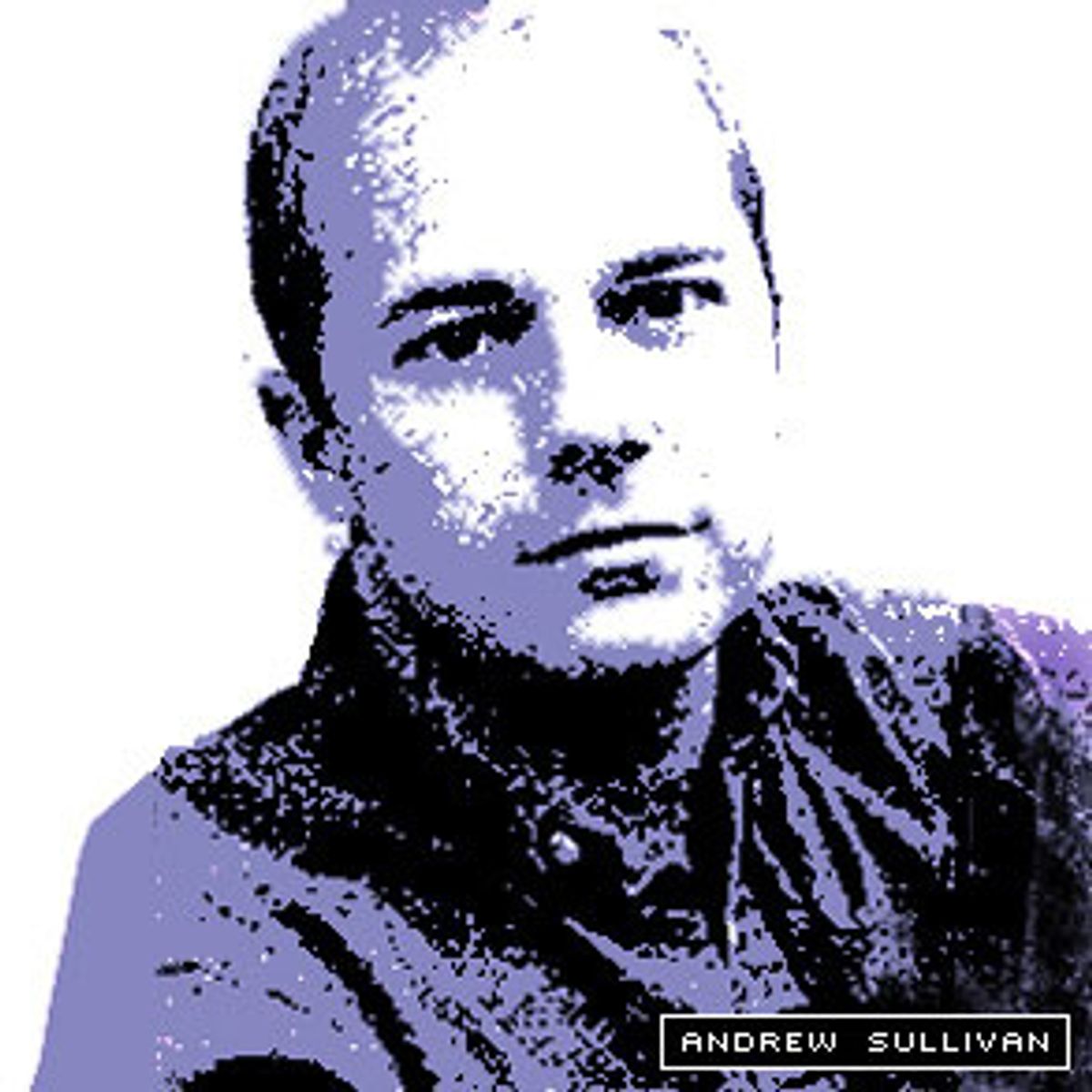 I would tell you my sex handle on America Online, but unfortunately, AOL deleted it. Oops. Too dirty. Most gay men I know have sex handles on AOL, or at least alternative anonymous names where they peruse cyberspace for LTRs (long-term-relations) or, ahem, short-term relationships. As someone has said, the Internet is like the new, more efficient gay bar.

Evidently, so is prominent gay editor, author and columnist Andrew Sullivan, who advertised for sex on AOL and on a sex Web site. Horrors. Sullivan, the stalwart gay conservative who has been an outspoken critic about what he decries as loose gay morals, irresponsible sex, excessive AIDS activist tactics and so on, was outed for his outri sexual preferences by several gay journalists last week, in what has become a media firestorm.

The author of the most extensive exposi, Michelangelo Signorile, has had a longstanding feud with Sullivan, and decided to expose his enemy's alleged hypocrisy in a cover story in a local New York gay publication, LGNY. He revealed Sullivan's AOL sex handle as well as savory details of a more raunchy sex ad on a gay Web site, where he was looking for partners who were also HIV positive and didn't want to use a condom. And he quoted anonymous sources who reported having had sex with Sullivan, linking him to the said nasty sex ad and AOL handle.

Like all juicy stories in our sex-celebrity-Internet age, the story has metastasized.

The first mention of Sullivan's private life was actually a paragraph by Michael Musto, two weeks ago, in the Village Voice. Then came Signorile's LGNY story. Jim Romenesko's Media News picked it up, but it was a New York Post story, following on LGNY's, that forced Sullivan to finally issue a defiant defense, after two weeks, on his own Web site. Wednesday, Inside.com reported on the flap.

Meanwhile, a third gay journalist was working to expose Sullivan: David Ehrenstein, a Los Angeles writer who, like Signorile, has been at odds with Sullivan over his moralizing. Ehrenstein, out of pique over what he saw as Sullivan's sexual double standards, in early May alerted editors at Salon.com and the Washington Post, among others, to Sullivan's sex handle and personal ad.

"In light of Andrew Sullivan's constributions (sic) to 'Salon,'" Ehrenstein wrote, "I think you should be made aware of the following information, currently circulating 'round the 'net. I warn you that it is blunt. But then so is Sullivan." The e-mail included what was apparently Sullivan's own posting on a gay sex site, and added: "I am, needless to say, not a disinterested observer. Mr. Sullivan and I have -- as they say 'had issues' in the past."

Well, I also have ideological differences with Sullivan. I am a gay, left-liberal, vegetarian Californian, and I often disagree with the Tory Catholic Sullivan. But however conservative Sullivan is, or how much he may moralize in ways that are different than me, he is entitled to sexual privacy. He acted confidentially, as most of us do, in good faith, online. He chose not to use his name or post a picture. Yet his adversaries decided to drag his most private sexual behavior through the town square for derision, to punish him for his political views.

As I read Signorile's story about Sullivan's alleged double life, and the excruciatingly detailed description of his online ad, I was pained at the violation of his privacy, and the obvious attempt to shame him. "It's almost enough to make you cry," a senior editor at the New York Times told me. Whatever discrepancies may exist between Sullivan's public words and private actions don't justify his abuse -- and I do see it as abuse, vendetta masquerading as advocacy journalism. Sullivan calls it "sexual McCarthyism," and many agree.

Indeed, some journalists passed on doing the Sullivan story. "I had to take the test of who does this affect, who is this relevant to. My conclusion is: It affects Andrew Sullivan only," says National Public Radio's Jon Beaupre, who has been president of the National Gay and Lesbian Journalists Association for two years. "People may disapprove of Sullivan or his behavior, but in the final analysis the main reason that people were pushing to cover this story was for scurrilous reasons, and I couldn't justify that."

It is Sullivan's preeminence as gay spokesman, as much as his beliefs, that have made him vulnerable to attack, says Bill Ervolino, Signorile's first editor at Nightlife magazine, who now writes a column for Bergen's The Record. "Sullivan has long been an object of scorn by members of the gay community who covet the attention he receives by the media, resent that he is far more conservative than most gay Americans would admit to being, and resent that he is the only gay spokesman who really matters on television," says Ervolino.

But Ehrenstein insists Sullivan deserves the scrutiny, and the attacks, because he has set himself up as a gay spokesman. "You've heard of head nigger in charge, going back to whole slavery thing. Well, Sullivan has become Head Faggot in Charge, and what better place to do that than at the New York Times," he says. "This has to do with a specific industry and a history, and with his statements about sexuality. This is not just Joe Gay Person."

Michael Musto agrees. "It was such a major case of sexual hypocrisy that I thought it was worthy of reporting. Sullivan for years has railed against Clinton for sexual indiscretions. He said that Clinton needed psychiatric help." In fact, while Sullivan was harshly critical of Clinton for his "reckless" behavior in the Lewinsky mess, he also attacked Independent Counsel Kenneth Starr for the "scolding, moralizing conservatism" of the lurid Starr Report and of the entire "Lewinsky Kulturkampf."

And while detractors call Sullivan a hypocrite, and use that as a defense for exposing his private sexual behavior, I cringe at the word. First of all, it implies that he believes one thing but purposely acts in a contradictory way. And there's no proof of that. Sullivan's writings about sex and relationships have always been complex, sometimes even contradictory. They've evolved over the years. He has certainly promoted gay marriage and monogamy; he has also defended the freedom and intimacy of unprotected sex with another HIV-positive lover.

At any rate, I defend Sullivan's right to his contradictions. I have felt and seen in myself discrepancies between my intentions and my actions, between what I most deeply feel and what I have at times said or done, in moments of human frailty, fear or need.

I am single and would like to only have meaningful sex, with meaningful partners, with whom there would clearly be a future possibility. But sometimes I am needy, sometimes I am horny, sometimes I am carnal -- well, often I am carnal -- and I try my best to navigate between being an extremely sexual being and being constructive and safe. I defend my right to sexual experimentation -- though, until recently, I never dreamed of defending it publicly. I remember, years ago, going to a leather bar in New York, and first making the connection that the most creative, interesting, edgy guys were often attracted to fringe sex. The emotions that touch highs and lows, the acting out of issues of control or power, the intensity of need, the creative acting out that spilled over into sex: No one should have to apologize for wanting to explore all that.

But I remember my own moment of fear and shock when I sent a picture online to someone on AOL, and I saw the following words appear in an instant message on my screen: "Didn't you just do an article in Vanity Fair?" My picture had recently run in the contributors section of the magazine. It was my first, sudden realization that I could be fair game for sexual behavior that diverges from vanilla, and looks nasty in print, the painful realization that Sullivan had forced on him thanks to this scandal.

Ehrenstein doesn't see the issue as "outing" because Sullivan was operating, even if anonymously, on the Internet, which he sees as public. "When you are going to put something out there in public space, is it private?" asks the author. "He is asking the world to come to his door. You go and find out who he is. People followed up the ads and found out it was him." That Sullivan is a public figure who has spoken out on the issues involved also makes him "fair game. He has opened the door. What are you going to do? Are you just going to ignore this?"

But if Sullivan is fair game, so are we all. Sullivan is now being tortured, but we are all at risk.

I actually believe Ehrenstein and Signorile went after Sullivan for reasons of principle. They are sincerely offended by what they see as Sullivan's passing judgment on gays who differ from him, especially his nasty attacks on gay leftists. Signorile writes:


In a particularly gratuitous slam, Sullivan only a few weeks ago on his Web site described San Francisco's gay community as "frozen in time," unlike gays in the rest of the U.S. who are "increasingly suburban, mainstream, assimilable.

"Here in the belly of the beast," he wrote in a swipe, "Village People look-alikes predominate, and sex is still central to the culture," as if his own ... web page doesn't evoke these very same stereotypes.

In his Internet rebuttal, Sullivan maintained that he only had sex with HIV-positive partners, and that the sex was consensual and outlined in advance. He chose to advertise on a graphic Web site because it efficiently telegraphed his particular sexual taste. He admits that he was naive when he was functioning sexually online, not suspecting that his private sexual behavior -- which did not involve matters of state, security or governance -- could become grist for public consumption.

Writing about my own online sexual activities, in solidarity with Sullivan, I cringe slightly. It's not something I would like my mother to read. But I don't assume that Andrew Sullivan wanted his boss, his friends, his family to read about his intimate sexual details. But he didn't have a choice.

Musto insists there is a difference between Sullivan and other gays looking for sex online. "We all have our own sexual secrets. This case only happened to be reportable because of sexual hypocrisy."

But I disagree. Sullivan was right when he insisted, in the closing line of what he says is his final word on the subject: "It is none of your business."

Cliff Rothman writes about politics and culture for Vanity Fair, the New York Times and the Los Angeles Times.