The real-life inspiration for the "Seinfeld" character wants to fix what Giuliani broke. If only stoners could remember to vote. 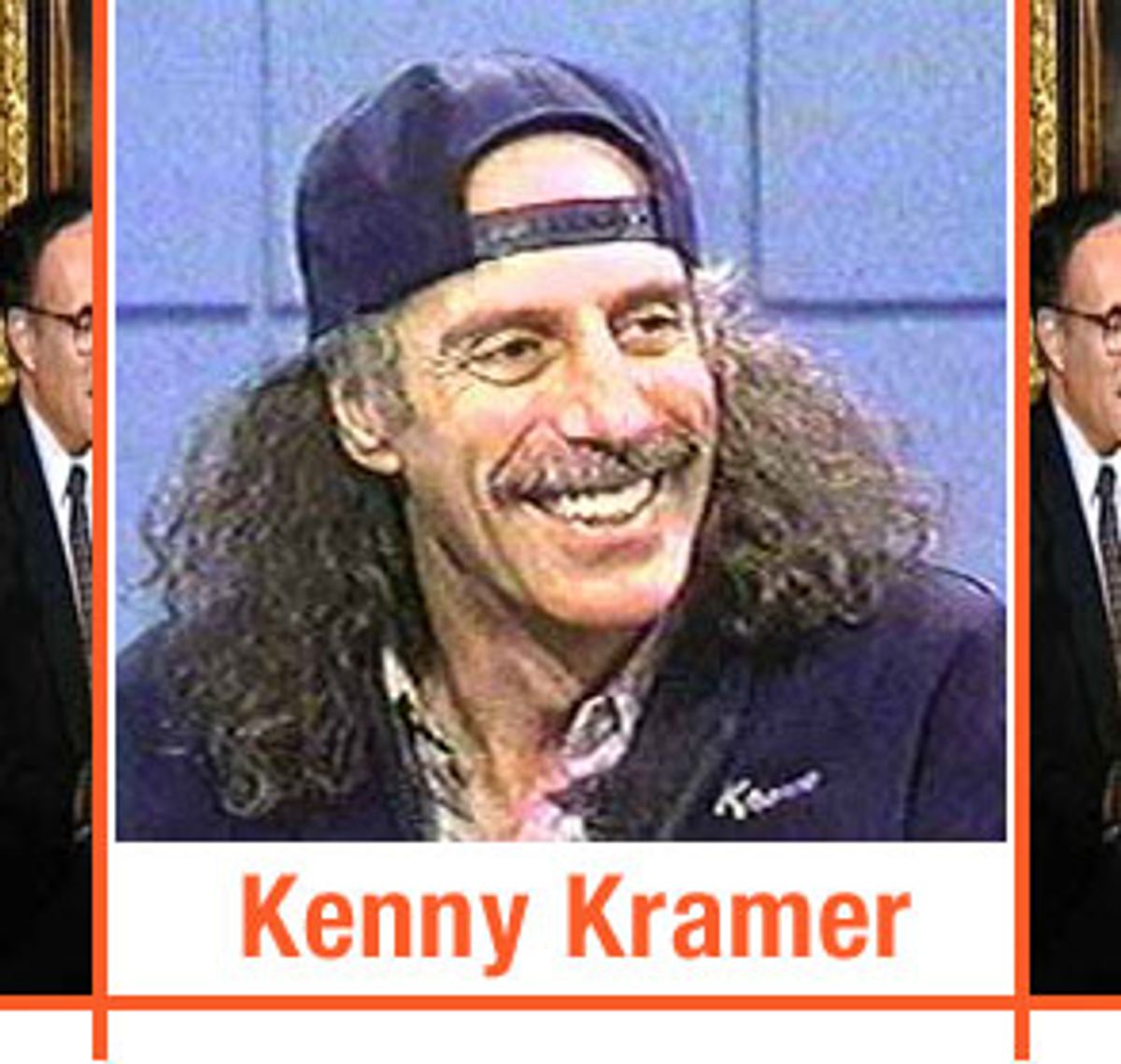 Given the circumstances, it was the last place on the planet that a New York mayoral candidate would be expected to turn up.

The Global March for Cannabis Liberation (aka the Million Marijuana March) had just about wound down when, lo and behold, a bona fide mayoral candidate mounted the stage and spun tales of his own vast experience as a pot smoker.

"You know, I used to smoke a lot of pot until I realized it was ruining my genes," the candidate said, then paused. "Yeah, the seeds were burning holes in all my pockets."

Political suicide? No, it's just Kenny Kramer, the real-life inspiration for the erratic next-door neighbor on "Seinfeld." While the TV Kramer never ran for mayor, this one says he's serious about joining the crowd hoping to succeed Rudy Giuliani as mayor of America's largest city.

"I've listened to all the other candidates," Kramer said the other day from his fabled apartment, "and it's all the same shit. Maybe it's a different flavor, different color, different-smelling shit, but it's still crap: humorless, idealess and clueless. They're politicians. It just comes out of their mouths. Their brains aren't involved at all."

In political profiles like this one, now would be the time to declare, "This fledgling campaign has electrified the city." In reality, the only people excited about Kramer at this point are pot smokers and a few odd stragglers. Granted, the local media has reason to be excited about anything but the coming mayoral contest. It may be the city's first post-Giuliani mayoral race, but those in the running -- four dull career Democrats and an astoundingly boring Republican billionaire -- are putting the town to sleep.

This only-in-America story started as all such made-for-TV stories start: with a reporter looking for a sound bite from a celebrity. In this case, Kramer was asked if he'd consider running for mayor because term-limited Giuliani cannot. Kramer, breaking the unspoken rule of celebrity sound bites, actually took the question seriously.

"If Jesse Ventura can be governor, why can't I be mayor?" he said. He was heard on 1,500 radio stations around the world, and the next thing Kramer knew, the Libertarian Party (full disclosure: This is a party that once ran Howard Stern for governor) was asking him to be its standard-bearer (fuller disclosure: This is something that obscure parties do in New York, such as when the Green Party ran "Grandpa" Al Lewis -- of "Munsters" fame -- for governor).

Kramer checked out the Libertarian philosophy -- decriminalize drugs, preserve individual rights and let the free market do the rest -- and joined the party. "They're very smart people," he said of Libertarians. "Some tend to overintellectualize, but they're smart."

A party member for a mere three weeks, Kramer -- who has spent the past few years making a good living conducting "reality tours" of "Seinfeld" locations -- nevertheless won the Libertarian nomination in April. He beat the only other candidate, None of the Above, in a 20-5 vote.

"It would've been really humiliating to lose," Kramer said. "Imagine having to call None of the Above to congratulate him on running such a good campaign."

With the Libertarian Party nomination sealed up, reporters seized on that thin veneer of legitimacy to herald Kramer's chances in the November election. This is certainly easy enough; there's always some campaign "expert" willing to say anything -- even that Kramer actually has a chance to win.

Actually he does not have a chance. Hell would have to freeze over, spin on the head of a needle, graduate from college and sing Tibetan folk songs in a pretty pink dress before Kenny Kramer would even have a shot of becoming New York's 108th mayor. But it's still a great story. The "Seinfeld" Kramer may have sold perfume that smelled like the beach, gone to acting classes with a midget sidekick and smoked Cubans, but the real Kramer sold glow-in-the-dark disco jewelry and did voice-overs for X-rated CD-ROMs.

And then there's the weed. Kramer credits his copious marijuana use for instilling in him the Libertarian philosophy that nourishes his campaign.

"I was such a pothead that I made a beanbag chair out of my marijuana seeds in just three months," said Kramer. "But my campaign is a walk-in closet. I own up to everything I did -- the drugs, the sex. I was at the forefront of the sexual revolution and I enjoyed every bit of it. Those other guys make such a fuss if someone smoked pot. Well, I smoked a lot in my day and I've been to Amsterdam, too."

Although he doesn't toke anymore, some things never change: At his campaign stop at the pot march last month, Kramer made his standard pitch for drug legalization, vowing that if he became mayor, he would immediately direct the police commissioner to deemphasize drug arrests.

"If I can just get all the pot smokers to vote for me, I'll win easily," Kramer said at the rally. "The only problem is that they can never remember to vote."

Since then, Kramer has been setting up his fundraising committee while his "issues committee" has been hammering out themes on which the one-time comedian can run.

"I have a take on education that is different than the other candidates," Kramer said. "No one is talking about parental involvement. You can't just drop the kids off at school. Parents should get a report card, too.

"I said that on the radio the other night," he continued, "and two days later, I heard Freddy Ferrer [one of the Democratic mayoral hopefuls] say the same thing. So somebody is obviously paying attention to me."

For now, the campaign is being waged through seemingly nonstop radio, TV and magazine interviews conducted from Kramer's Hell's Kitchen apartment, the same apartment that was across the hall from "Seinfeld" co-creator Larry David's. (Seinfeld himself lived uptown, so it was David's refrigerator that was always getting raided.)

Recalling those days, David recently told the New York Times that he could not, in good conscience, endorse the fictional Kramer, but he offered his unqualified support for his longtime friend.

"I actually do think he'd be good for New York," David said. "He can't keep a secret, so he'd have a very open government. He's a very honest person. He's funny. He's actually very sensible about many things."

Despite David's kind words, Kramer had only sympathy for his friend, whose chosen profession has forced him to give up that apartment across the hall. "With all his money, he still has to live in California," Kramer said. "Poor guy."