British magazine i-D marks 20 years of pimples, dimples and fashion in the rough. 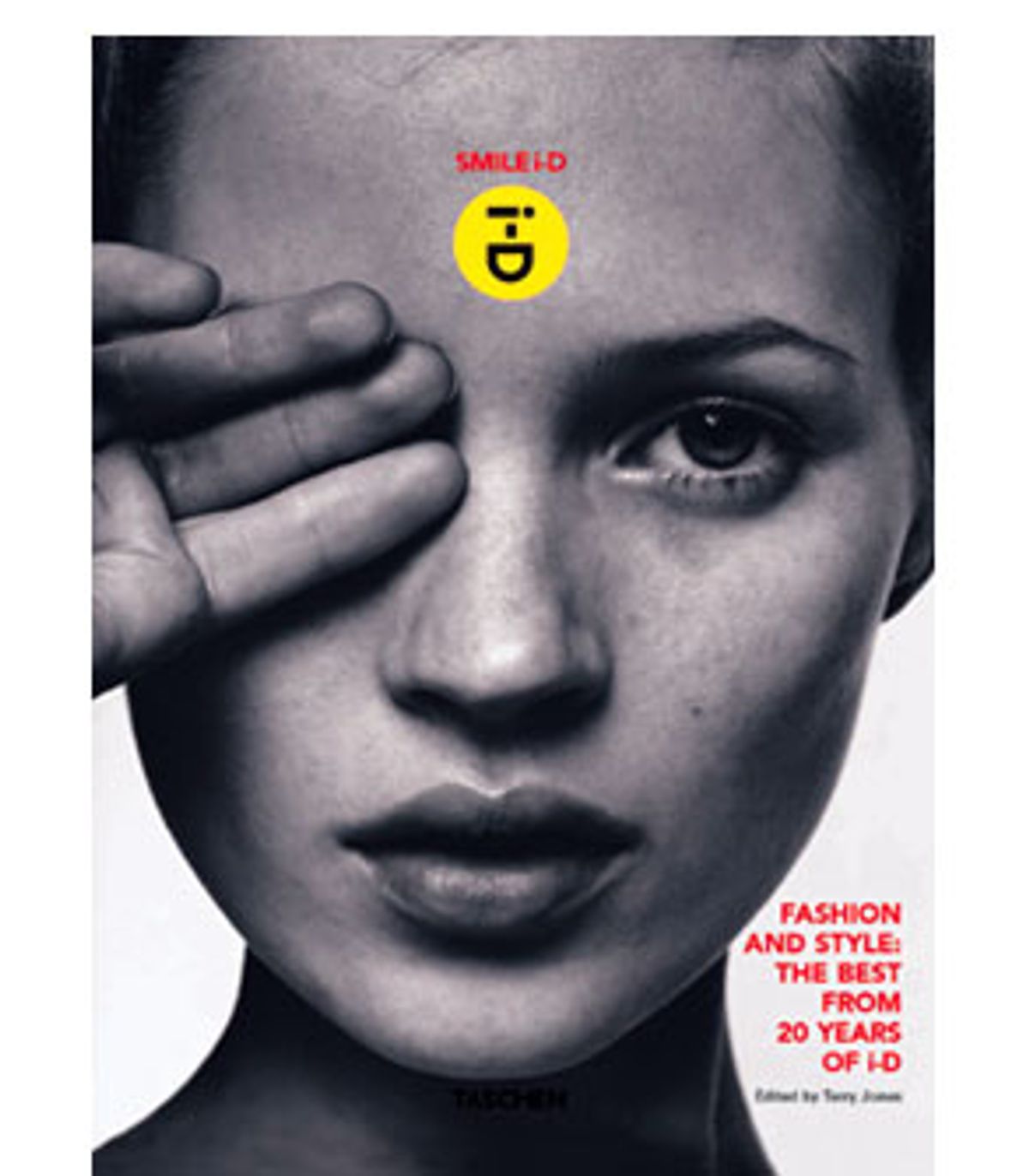 In 1994, as a student returning to San Francisco after a year abroad in London, I hauled home a suitcase that must have weighed about 60 pounds. The suitcase was stuffed with clothes, shoes, CDs and other detritus I'd picked up during my stay; but the real backbreaking culprit was my collection of a year's worth of i-D magazine, which I'd refused to throw away and insisted on carrying back home with me. (Little did I realize, in my avidity, that the magazine could be found in the States.)

Raised on a steady fantasy diet of Vogue, Elle, Cosmopolitan and Mademoiselle -- each packed with airbrushed models striking insouciant poses in unfathomably expensive clothes -- my discovery of i-D in London was an epiphany. Here was a magazine that was about fashion that was real. Unlike those picture-perfect glossies, i-D featured raw fashion from the street: photographs of normal people wearing their everyday clothes and looking not necessarily fabulous but, more important, unique.

The models in the book wore designer togs as if they were rags, mixing Helmut Lang with customized secondhand T-shirts and Top Shop trends. For the first time, opening a fashion magazine didn't make me feel like a cloddish troglodyte who needed fixing; i-D brought the heady world of fashion down to my level.

For the first time, I realized that fashion could have flaws.

These days, i-D is hardly the only magazine that's pushing this vision of fashion. (And even in 1993, when I first discovered the magazine, i-D was competing with equally influential British magazines Dazed and Confused and the Face.) Avant-garde fashion rags now cram the magazine racks: Purple, Spoon, Flaunt, Surface, V, Jalouse, Big, Dutch, Visionaire, Index and so on. But i-D was one of the first -- when I discovered it, I was already 13 years late to the party -- and arguably the best, and continues to be the seminal and influential alternative fashion magazine.

The magazine launched in 1980 as a punk fanzine, the brainstorm of disaffected former Vogue art director Terry Jones. Twenty years later, Jones is still editor in chief and creative director of i-D; and the magazine has evolved from a lo-fi, low-budget project to a Time Out-owned glossy. In honor of the magazine's 20th anniversary and its 200th issue, Taschen has released the coffee-table book "Smile i-D," a dense and thrilling 600-page collection of images (plus a few words) from the past two decades of the magazine.

"Smile i-D" not only reproduces some of the most stunning styling and photography of the past 20 years but also documents the changing cultural zeitgeist of those times, as seen in the streets of London. If something was cool -- really cool -- it could be found in the pages of i-D before you'd find it anywhere else.

Take, for example, the opening spread of images from the first issue: a series of London punks, complete with fishnets and safety pins and spiky dos and shredded leather, photographed against a white backdrop. Three years later, it's a shocking-pink and snarling Madonna -- in her "Virgin" days -- winking on the cover and new wavers frolicking in off-the-shoulder fluorescent attire; followed swiftly by mods in their pinstripes and "cuties" in pastel androgynous frocks; moving on through rave, jungle, hip-hop and Britpop -- each cultural movement represented not just by its up-and-coming celebrities but also by its representatives on the sidewalks, in the suburbs, in clubs and bars.

Each on-the-street photo was (and still is) accompanied by a mini-interview -- a "journalistic approach to style," as Jones puts it -- and the subsequent "Smile i-D" collection of quotes offers a gritty, realistic and utterly unglamorous peek at the human relationship to clothing. (Quoth one punk, "The trousers I'm wearing are filthy. It's because I lie under my bike and get oil drips.")

The magazine was first, over and over again. It did illegible text long before David Carson and Raygun; Jones would blithely chop off the ends of stories because they didn't fit his layout, or use smeary typography, or scrawl all over photos with graffiti. The magazine launched the careers of photographers like Corinne Day, David Sims and Juergen Teller, and can perhaps be credited with the rise of the quirky model, as it pioneered famously untraditional faces such as Kate Moss, Alek Wek and Stella Tenant.

(A 1998 spread of popular Brazilian beauty Gisele inspired this tongue-in-cheek apology to readers: "Gisele, commercial girl, on the cover of i-D. Excuse me? Is this some heavy dose of super-irony or a simple case of being blown away by unquestionable beauty? Maybe it's both ... Shouldn't we be using 'odd' models to create new boundaries of beauty, to redefine industry standards and then watch those self-same girls move into the mainstream to make a mint? Well, yes.")

Although i-D is a fashion magazine at heart, its approach to clothing and beauty can only be described as irreverent; if something appears in Vogue, you can expect the exact opposite in i-D. It is a magazine that puts Christian Lacroix couture on a paper doll and photographs it standing in a pile of used dishes in a filthy kitchen, or designs a mannequin out of garden vegetables and dresses it in a Hussein Chalayan top. Models are togged up in ill-fitting frocks, distressed secondhand clothes, tatty underwear or else just plain old naked. And real people are photographed in their own clothes as if they were ready to march down a catwalk: a plain girl in white fishnets, a too-small miniskirt and bobby socks; a plump vixen in PVC fetish gear and a push-up bra; a traditional British lad in a football jersey and tight blue jeans. In i-D's world, pimples and dimpled thighs are A-OK.

And then, of course, there are the iconic covers, each one graced by a close-up of the cover model winking at the camera. (Turn the title i-D on its side and you get a wink and a smile.) Every one of the magazine's simple covers -- a scrubbed-clean Moss covering one eye with a quiet salute, a monstrous PJ Harvey in garish blue eye shadow and enormous fake lashes smiling like the Mona Lisa, angelic Devon Aoki delicately hiding her eye with a tiny green leaf -- is more memorable than any number of checkout-counter glossies with Cindy Crawford in couture.

These days, i-D more closely resembles a glossy magazine than the stapled fanzine it once was; but in between the stunning photography and high-quality paper and occasional Versace top lives the same edgy tone Jones introduced 20 years ago. Charting the magazine's evolution, "Smile i-D" draws the logical connection between diapered punks and designer frocks -- it's all about dressing up to rock 'n' roll. And although I regrettably disposed of my old copies of i-D during a closet-cleaning frenzy a few years back, "Smile i-D" does that dusty stack of magazines one better: The entire book weighs less than 5 pounds, perfect for a suitcase.