Negotiating a bill through Congress, Bush's faith czar expresses frustration with his own White House. 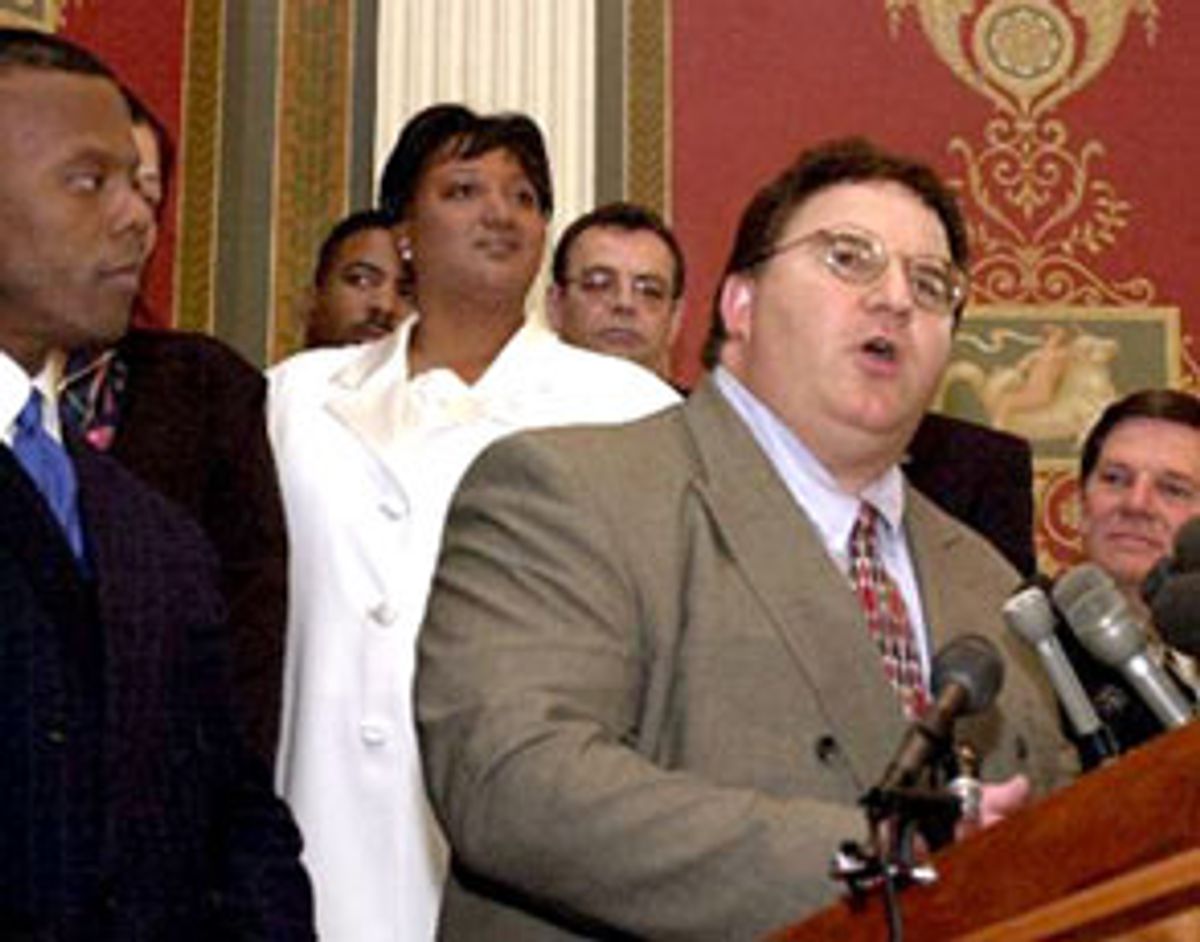 John DiIulio Jr., the Catholic Democrat drafted by President Bush to head the White House Office of Faith-Based and Community Initiatives, has been an advocate for increasing the role of private religious charities in public life. But as congressional bills to implement such plans are crafted, DiIulio has recently expressed frustration with Bush's failure to specifically articulate what he wants in a congressional bill, according to both Democratic and Republican Capitol Hill sources deeply involved in the faith-based initiative issue.

In the past few weeks, DiIulio has complained, according to these sources, that by not spelling out what he would like to sign into law, the president is ceding the issue to House Republicans -- whose bill is far more controversial and is less likely to make it through the Democratic-controlled Senate.

While some White House sources maintain DiIulio is ready to argue for the House bill, others say DiIulio is focusing on the bill in the Senate. "DiIulio has expressed concern that the more the House bill becomes perceived as the president's bill, the greater the likelihood that this whole enterprise is just going to blow up," said one of those knowledgeable sources. "He knows the House bill has several radioactive provisions."

White House spokesman Jimmy Orr did not comment on the specifics of the two bills, saying only, "The president believes we need to expand charitable choice so that faith-based organizations receive federal grants when it comes to helping people in need."

If DiIulio is indeed leaning toward the Senate bill, it may be only for pragmatic reasons. "Before the Jeffords switch, the House bill was an extremely hard sell," says a Democratic Senate staffer involved with the issue. "Now, with the Democrats in control [of the Senate], it's DOA."

The GOP Senate leader on the faith-based initiative, Sen. Rick Santorum, R-Pa., seemed to acknowledge this problem as well. Discussing why the Senate bill he authored with Sen. Joe Lieberman, D-Conn., focused on making the tax code more friendly to religious charities -- without the "charitable choice" provision in the House bill, which would allow the federal government to fund activities that include proselytizing -- Santorum told the New York Times on May 23, "I feel that someday we'll move something forward [on charitable choice], but right now this is a hot button issue."

And yet, as DiIulio leaves some on Capitol Hill with the impression that he supports the Senate bill, the White House -- veiled as always in its cloak of secrecy -- seems to be operating at cross-purposes with its faith-based initiative czar.

As Bush maintains his public silence on the specifics of the two bills, an administration official says the president fully supports the House bill. "We are working closely with the White House and the White House is very supportive of our efforts," a senior House GOP staffer says.

At this stage, any differences between DiIulio and Bush are more political than policy driven. While DiIulio seems to be focusing on determining what kind of faith-based measure can clear the new Congress, Bush may be trying to shore up support among his party's religious right wing as well as reach out to Catholics, a key swing constituency that Bush has courted aggressively since becoming president. By staying silent on the two bills, he reaps the benefits of the House bill as it wends its way through the legislative process, but is still positioned to claim victory with whatever proposal ends up passing the Congress.

And coming out for the House bill in current form may have political traps for Bush. The church-state issues separating the House bill from the Senate version couldn't be more sticky, which is undoubtedly why Bush has yet to clarify his position on them. The House bill, offered by Reps. J.C. Watts, R-Okla., and Tony Hall, D-Ohio, contains the controversial "charitable choice" provision, which would allow religious charities that proselytize to compete with other charities for federal funding. Current federal law keeps tax dollars from funding religious activities, so that charities run by religious organizations keep proselytizing apart from charitable acts. Additionally, the House bill would exempt these religious groups from some federal nondiscrimination laws.

One of the sticking points in the House bill briefly reared its head two Wednesdays ago at a House government reform subcommittee hearing on faith-based initiatives. There, John Castellani, the director of the Christian drug treatment program Teen Challenge, referred to Jewish kids who went through his program and converted to Christianity as "completed Jews," using evangelical terminology that refers to Jews who don't believe in Jesus as "uncompleted."

That brought some heat upon the proceedings. The executive director of the American Jewish Congress, Phil Baum, called Castellani's comments "yet more proof that there are pockets of the Christian community that have difficulty accepting Judaism as a valid and independent faith." Baum called the House bill "a violation of church-state separation" that "would provide taxpayer support for doctrines that consider Jews incomplete if they remain Jewish."

Charitable choice is just one of the lingering questions in the faith-based debate. Other key issues remain unresolved, including how the government can decide which religious groups are "valid" and which aren't. Or how the government can ensure, as Bush pledges, that it won't actually be funding religion -- quite frequently a problem for courts in the face of the Constitution. Then there are the other considerations: How to craft the issue for the president so it is more of a political positive than negative. And most important, how to actually pass a bill into law.

But in the face of a growing need for the president to address these questions, the White House has remained silent, and DiIulio has expressed concern that Bush's refusal to spell out his precise stance may jeopardize the entire project. He is said to blame this not on the president but on senior White House advisors, whom he believes are making a tactical mistake if they want to see an actual law passed.

"The White House has run into a bit more turbulence than they expected," says one senior House staffer directly involved with the bill. "A lot of these issues haven't been debated or discussed publicly; it just can't be a slam-dunk."

One of those questions sure to be debated is whether faith-based groups can receive federal funding for activities that include proselytizing. In Texas, Bush had no problem pushing for state funding for Teen Challenge and other similar groups, but he isn't in Texas anymore. And when it comes to the concerns of civil libertarians or nonevangelical Christians, the U.S. Senate is certainly not the Texas Senate.

This issue of "to proselytize or not to proselytize" is no small matter for either side, as some Christian leaders have complained that the very removal of proselytizing from their charitable activities would render them less effective. Other Christian leaders, like Pat Robertson and the Rev. Jerry Falwell, have expressed grave concerns about a world where the federal government is forced to fund faith-based charities where the faith in question is Scientology or the Hare Krishnas.

In a May 21 speech at Notre Dame University, Bush remained vague on specifics, saying "government should never fund the teaching of faith, but it should support the good works of the faithful."

Bush then began arguing the case for allowing religious groups a greater role in receiving federal funds. "Some critics of this approach object to the idea of government funding going to any group motivated by faith," he said. "But they should take a look around them. Public money already goes to groups like the Center for the Homeless and, on a larger scale, to Catholic Charities. Do the critics really want to cut them off? Medicaid and Medicare money currently goes to religious hospitals. Should this practice be ended? Child-care vouchers for low-income families are redeemed every day at houses of worship across America. Should this be prevented? Government loans send countless students to religious colleges. Should that be banned? Of course not."

What Bush did not explain was that many of these organizations have set up separate and distinct programs that do not preach while providing the shelter, healthcare or education paid for with federal funding. Groups such as Teen Challenge, however, provide their services directly through proselytizing activities. That is an important distinction, and Bush has not yet explained his public position.

The House bill would allow these groups to continue proselytizing as long as two conditions are met: A secular alternative must be available, and a representative of the faith-based program must sign a document promising that the money will not be spent on proselytizing activities.

"The money could fund the carrots in the soup of a soup kitchen, but not the [religious] tracts," says the senior House GOP source.

To critics of the House bill, however, this is a meaningless distinction. And one of those critics -- Lieberman -- is DiIulio's Senate partner on the issue.

The House version of the initiative is also raising controversy because of an exemption in the bill that would allow faith-based charities receiving federal funding to hire and fire employees based on whether they follow the "practices" of the religion.

Current law does free faith-based charities that receive federal funding from federal laws prohibiting discrimination on the basis of religion. If a Catholic charity wants to hire only Catholics, it can, under the few charitable choice provisions already enacted, such as the 1996 welfare reform law.

But under this new provision in the House bill, people whose lives could come in direct conflict with a religion's "practices" -- such as gays or lesbians, whose homosexuality conflicts with, for example, much Christian teaching -- could lose their jobs. As could women, for not adhering to strict biblical requirements of subservience. Or merely those who aren't as orthodox in their observances like, say, divorcees or drinkers. All of these can already happen, but not with the support of federal funds. And since the House bill would trump state and local law, individuals could be fired for those reasons even if afforded civil rights protection locally.

One Democratic Senate aide pointed out that under the House bill, federal funds could support charities run by fundamentalist Bob Jones University, which until recently banned interracial dating, and still requires students to receive written permission from their parents before such dating is allowed. Ultimately, were the House bill to become law, taxpayers could end up paying the salaries of an organization able to fire an individual for interracial dating.

Even if Bush is ceding the issue to House Republicans, in some of his comments DiIulio doesn't seem to be.

In a recent interview with the Weekly Standard, for instance, DiIulio made a much stronger argument in favor of the underlying principles of the Lieberman-Santorum bill than he did for "charitable choice," the House bill that contains the more controversial provisions. "The real action is in the private and philanthropic and corporate sector," DiIulio said. "That is a much bigger deal in the long run than anything that will happen with government. That's where the money is."

And that's also where the votes are.