The scandal that won't die

Ari Fleischer says there really is evidence of vandalism by Clinton staffers, so the GAO is investigating -- again. 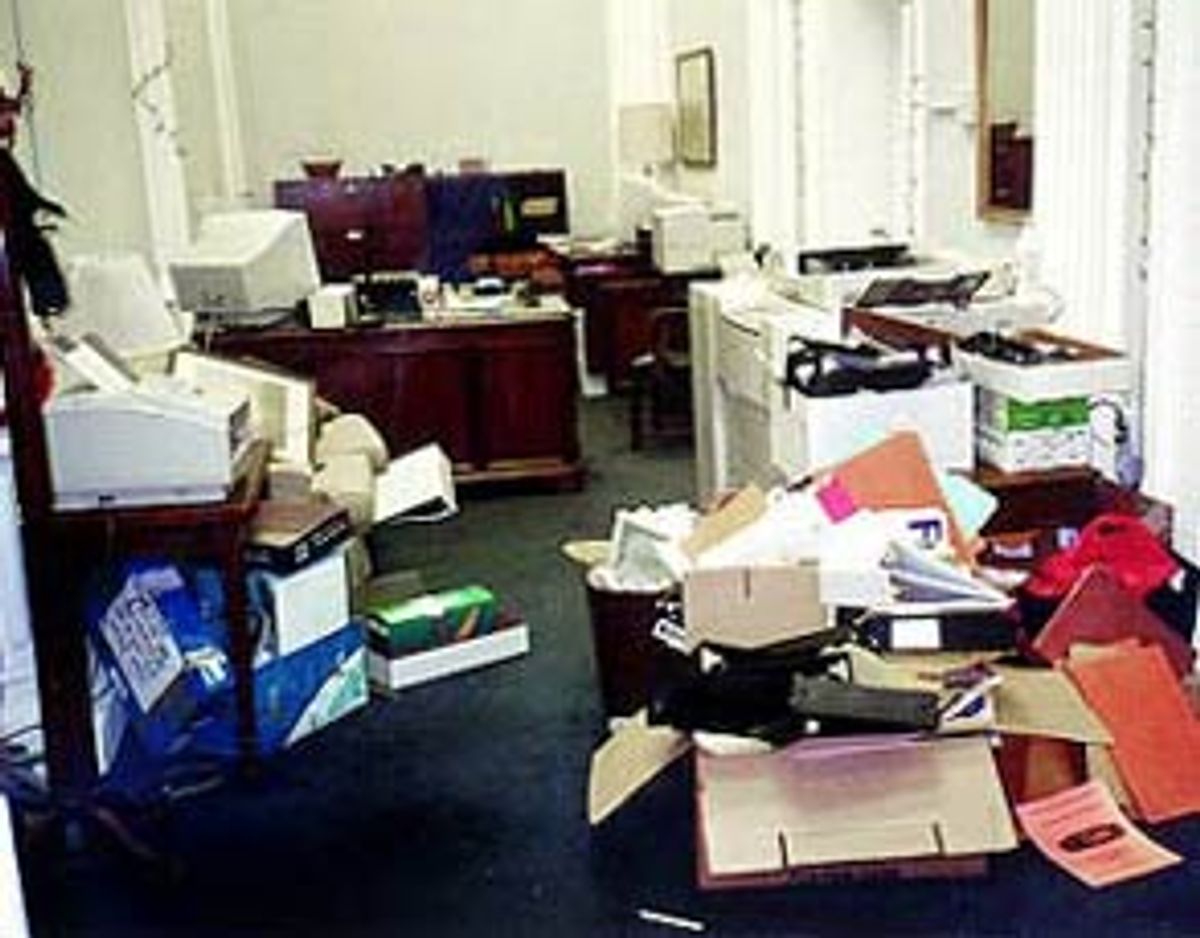 The vandalism rumors ranged from jokey door signs (like one reading "Office of Strategery") to allegations that Clinton staffers had tried to steal White House paintings. They led to violent spinning by both the previous and the current presidential administrations -- and the stakes have continued to escalate.

Now, the scandal that won't die has a new life. On Monday the General Accounting Office, on its own initiative, reopened an investigation into alleged vandalism against the White House and presidential offices by exiting Clinton staffers, a story propagated by anonymous sources in the Bush administration and aided by Bush press secretary Ari Fleischer.

More than two weeks ago, the GAO concluded there was no evidence of such vandalism. But Fleischer had been hinting darkly that he had the goods, and over the weekend a Washington Post story laid them out: According to Bush staffers, there had been instances of obscene graffiti, cut phone lines, broken computer keyboards and a presidential seal ripped off a wall.

While Bernard Ungar, the GAO's director of physical infrastructure, told Salon that the probe is "probably going to take a good bit of time," forces on both sides of the political aisle are already preparing to spin away any finding that proves that ultimately they were the ones in the wrong.

The Clinton administration finds itself in precisely the same position it was in back in early February, when Rep. Bob Barr, R-Ga., first asked the GAO to investigate the vandalism rumors. "From the beginning we've asked the White House for some substantiation for this alleged vandalism," says former Clinton press secretary Jake Siewert. "That's all we asked for in the first place."

The GAO investigation could pose greater problems for the current administration, particularly Fleischer. It was Fleischer, after all, who put the story in play by announcing that the White House was "cataloging" the vandalism. Then, after the GAO reported that the alleged damage couldn't be investigated precisely because that "cataloging" had never happened, Fleischer came in for extensive criticism for fanning the rumors.

Democrats stepped up their attacks last week. Led by Rep. Anthony Weiner, D-N.Y., they jumped on the story as a chance to criticize the new administration for violating its own promises to "change the tone" in Washington. On Friday Weiner led a delegation to the White House and asked the administration to formally apologize to the previous administration.

That seemed a push too far, and Fleischer sprang into attack on Saturday, giving an exclusive to the Washington Post's Mike Allen (who had earlier reported some of the most outrageous rumors), in which he said that the White House had compiled a list of damage "based on the recollections of officials and career government employees" that included "obscene graffiti in six offices, a 20-inch-wide presidential seal ripped off a wall, 10 sliced telephone lines and 100 inoperable computer keyboards."

"We tried to be gracious, but the last administration would not take graciousness," Fleischer told the Post. "By getting the information out, we hope to put an end to this."

Not likely. Soon Clinton staffers, including Siewert, were raging about the new allegations, pointing out that there should have been an official paper trail documenting them. "I worked there," Siewert said. "If you needed something, or if something was broken, you had to fill out a form. There was a record of it."

The White House, meanwhile, allowed Salon to borrow and scan the photographs (one accompanies this story) it was showing reporters of the mess left by Clinton staffers. But the photographs -- which seem to capture sloppy stacks of garbage and old Christmas lights left by staffers for janitors -- don't do anything to bolster allegations of widespread destruction. White House press spokesman Jimmy Orr says the photos are only meant to show the "disarray" offices were left in, not any actual vandalism that occurred.

Still, by midday Monday a strange détente was apparent between the warring factions, both of which seemed willing to watch the whole episode fall into an unresolved partisan purgatory. Barr, on CNN and through his press secretary, said he was content to "learn" from the episode and make sure that the accounting difficulties that kept the GAO from investigating the matter be fully identified so that a similar situation wouldn't happen again. Weiner, who was adamant about getting a formal apology on Friday, told Salon, "I'll take anything at this point."

GAO's Ungar, however, had different ideas. Reading the Post's exclusive, he realized that the list Fleischer had drawn up for the newspaper could be used for the agency's abandoned investigation, which, he told Barr in an April 27 letter, had ended because the White House had not turned over any official record of the alleged damage. Monday morning, Ungar called the White House to request a copy of the list.

"We figured that Mr. Barr would have wanted us to do this," Ungar said. "And if he didn't for some reason, then we figured Mr. Weiner would probably want us to do this." Weiner, like Barr, is a member of the House Judiciary Committee.

Suddenly, the vandal scandal is back in the hands of the nonpartisan GAO. And while both sides have something to fear, nobody seems as vulnerable as Fleischer.

Barr sent a letter stating that he is grateful that the White House now "has indicated a willingness to document and investigate vandalism to White House property" that is, he wrote, "unacceptable to me and unacceptable to most law-abiding Americans." Then, even though the GAO had already contacted the White House for its list, Barr wrote that he "respectfully requests the GAO work with the White House Office of Administration to fully document" the alleged vandalism.

Weiner, for his part, issued a statement saying that "if evidence exists showing that deliberate harm was done to the White House office buildings, then it should be made immediately available" to the GAO, though "questions will certainly be raised about why it was not disclosed sooner and in accordance with the law." The White House, Weiner said, might very well have been in violation of a law that requires the full participation of government employees in GAO investigations.

So while the scandal lives on, anybody expecting a definitive resolution to the scandal might be disappointed. Ungar says he knows about Fleischer's list of damage only from what he read in the Post. "We're not even sure what information is available," Ungar says. He points out that in the Old Executive Office Building, where the majority of the damage is alleged to have occurred, there are more than 200 offices.

"I don't know what kind of repair records there are, if there will even be specific room numbers," he says. He says investigators will need to interview staffers to find out what is being alleged, and try to match the assertions with final repair records.

"Once we find out what was damaged, we'll need to try and decide whether it was intentional," he says. Ungar wouldn't rule out vandalism, but he also wouldn't rule out the possibility that instances of phone lines being cut were the result of renovations done to the space by cleanup crews. "It might have been the cleanup. That certainly is possible that some of it was not intentional. I just don't know."

Either way, Ungar allows, "the whole thing is somewhat bizarre."

Siewert still blames the press for making too much of the story, and singles out the Post. "They've twice put the charges on the front page," he says. "The Post provided cover for a lot of less scrupulous press to go forward on this story."

But Fleischer's role continues to be prominent. In trying to carefully control the story's development -- from the beginning, when he gave reporters the confirmation they needed to pursue it, through last weekend, when he seemed to try to finally quash it -- he has become the person most associated with it.

While the GAO may ultimately be able to finger groups of Clinton staffers gleefully scissoring phone lines or inserting naughty photos in the Oval Office copy machine, the alleged incidents are a far cry from the extremes originally reported. It is difficult not to conclude, based on the list Fleischer has already released, that the early reports were hyped beyond measure.

And should the GAO be unable to conclude that the latest stories -- of vandalism now five months old and undocumented when it supposedly occurred -- are true, the role Fleischer played in advancing them could end up raising more questions about his character than about the Clinton administration's.