Political comedian Al Franken on the Bush daughters, why conservative pundits are so annoying and Barbra Streisand, rain forest killer. 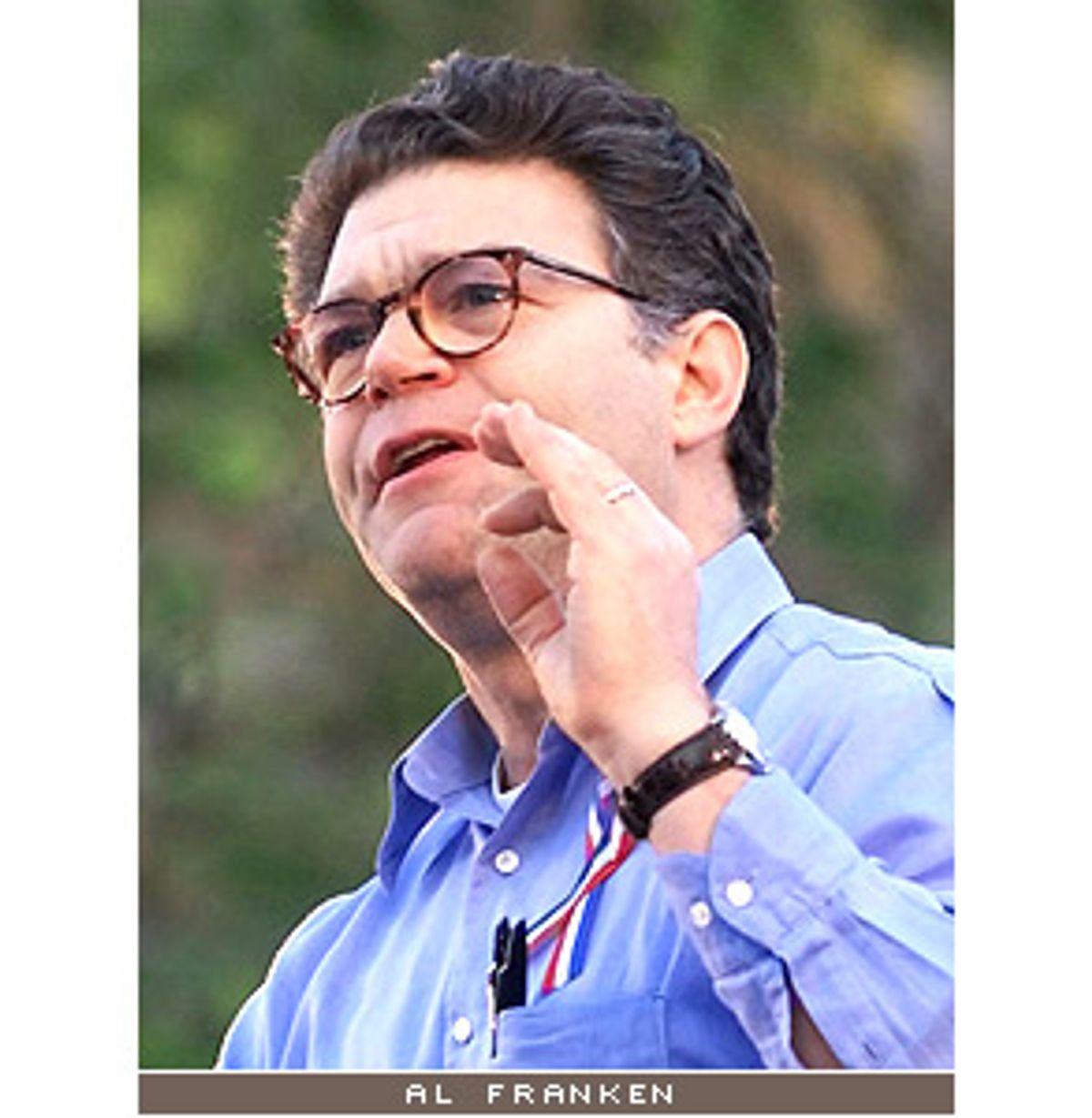 Al Franken is either a hysterical satirist or a mean-spirited wiseass, depending on which side of the political aisle you happen to call home. In 1996, the Harvard-schooled policy wonk and former "Saturday Night Live" writer endeared himself to GOP haters with his bestselling "Rush Limbaugh Is a Big Fat Idiot," a liberal manifesto that rails against every specious, misguided tenet of conservatism. With whimsically caustic chapter titles like "The Newt Gingrich Cancer Story" and "Pat Buchanan: Nazi Lover," Franken unsparingly posits right-wing zealots as vindictive, sanctimonious hypocrites. Three years later, Franken followed up with "Why Not Me?" a politically astute mock memoir recounting "the dramatic rise and dizzying fall of Al Franken, who became the first Jewish President of the United States." After eight years of defending his friend Bill Clinton, Franken has a whole new administration to ridicule.

Salon recently spoke with Al Franken by phone as he prepped for an upcoming comedy festival in New York.

I'm going to give you a few names and I want you to tell me the first word that comes to mind.

By all accounts, George W. Bush has been a failure at everything he's ever done, from trading away Sammy Sosa to earning C's at Yale. Can you explain how someone like this gets elected?

Well, I mean his dad was president. That's something you have to remember. Bill Hillsman, the ad guy from Minnesota who did [Governor Jesse] Ventura's and [Senator Paul] Wellstone's ads, said that if he had been running the Democratic ads he would've used the line, "Here's a guy who couldn't find oil in Texas."

Does it disturb you that so many people would vote for someone simply because of their lineage?

I think it was the kind of thing where they felt safe. They wanted change, but a safe change. I guess they felt comfortable that even though G.W. didn't seem like someone who had a lot of experience or knew a lot, he would be surrounded by people who did.

Why do you think voters didn't feel comfortable with Vice President Gore after eight years?

I think Clinton fatigue was a real thing. It's just hard to get comfortable with Gore -- it was hard for him to project who he is, the person people know in private. People wanted a change in tone in Washington, even though Bush doesn't actually act on that. But that's what he was promising.

You've never been shy in your support of President Clinton. During the impeachment debacle, did your feelings toward him as a friend and a president ever waver?

Well, I find myself still defending him. For example, on the pardons -- people don't really give him credit for the pardons he didn't give. The Unabomber -- behind bars. Evidently, Charles Manson contacted Roger Clinton based on their mutual interest in music. I think the president showed good judgment in those cases.

What was your first reaction when you heard Florida had been taken away from Gore on Election Night? Did you think the fix was in?

I didn't think it was a fix. I had never heard of this so I was upset. I was very upset. [Laughs] It looked pretty good; it looked with Michigan, Pennsylvania and Florida that we had it. I couldn't believe it, and they did it again! It was unbelievable. I sort of blame Fox on the second one.

Last week, the police nabbed Jenna Bush on her second alcohol-related incident in a month. Does President Bush have an obligation to address this matter publicly, considering that he ran on a platform stressing a return to moral values and the betterment of child welfare?

Well, he didn't help himself during his Yale commencement address when he said he didn't remember a lot from his time there. He did a joke essentially saying, "I was drunk a lot." I think that was probably not the right joke to tell when your daughter is having these problems. I could see the joke about being a "C" student, but he should probably say something publicly like he doesn't approve of underage drinking or something. [Laughs] I think that's sort of the least he can do.

Considering the nature of their recent behavior, are the Bush girls fair game for the media now?

Well, I think that he is. I will point out that Chelsea Clinton, in the eight years her father was president, didn't get arrested once. The problem with Jenna is that it's been twice in four months. A third time -- it's three strikes and you're out in Texas -- and they'll have to execute her. Bad.

Over the years, your one-time bedfellow Arianna Huffington has become increasingly estranged from the Republican Party. Do you take any credit at all for her newfound love of liberalism?

I don't know if it coincided with the period in which Arianna got to know me or whether I had some influence. Either way she's now actually to my left. I saw it all happen, so it doesn't surprise me. Originally, when I first met her, she was a [Newt] Gingrich acolyte. In my first conversation with her, I tried to tell her that I didn't think Gingrich was a good guy. She liked him as a guy ... and I had little problem with him as a guy. Now, as it turned out, I was wrong. For example, I thought his speech at the last convention, "Adultery With a Purpose," was a great speech.

In the spirit of Sen. Jim Jeffords' defection, what would you say to convince another Republican to switch allegiances?

Actually, I think the Bushes are trying to get Jenna to switch.

Let's see -- it's nobody's business, it's his private life, he and his wife clearly were estranged anyway, it wasn't like he was cheating on her, he's been a great mayor and he has prostate cancer.

But do you think there's a double standard in the media relating to its coverage of Giuliani's philandering as compared to President Clinton's? Most of the New York press, for instance, tactfully refer to Nathan as the mayor's "girlfriend" rather than "mistress" or "lover."

Well, with Clinton there were a lot of problems. He wasn't totally upfront. [Laughs] I think that was a problem. Also, there's a difference being estranged from your wife and finding companionship as supposed to being married and having a fling. There are some distinctions. Also, he was the president and this was just the mayor. [Laughs]

On a recent episode of "Politically Incorrect With Bill Maher," you got into a heated argument with conservative lobbyist Marjorie Strayer over the fairness of President Bush's $1.35 trillion tax cut. If you could pinpoint it, what is it about right-wing commentators that make them so goddamn irritating?

She was taking a very small side issue that had nothing to do with anything, which was the earned-income tax credit. For some reason, she claimed that Republicans had been instrumental in the increase in the earning of tax credits when -- ever since it was expanded under Bush -- Republicans had been fighting that. The only thing you've ever heard them say about the earned-income tax credit is that it's subject to widespread fraud. You'll remember, President Bush had to chide his own party 'cause they were going to balance the budget on the backs of the poor and then send the earned-income tax credit into another year. The lack of intellectual honesty was what was bothering me; the willingness to actually engage as opposed to just shouting over me. She got out of control. Either she didn't know what she was talking about or she was being dishonest.

Among Ann Coulter, Barbara Olson, Laura Ingraham and Peggy Noonan, who would you most like to muzzle and why?

Don't you find it somewhat amusing that the aforementioned women have all made their literary careers off the Clinton name? What do you make of their unhealthy fixation on the former first family?

Well, I'm vulnerable on this score 'cause my biggest literary success was the Rush Limbaugh book. So, who am I?

Do you plan on writing another book in the vein of "Rush Limbaugh Is a Big Fat Idiot" and, if so, who would be your new whipping boy now that Limbaugh is not as fat as he used to be?

By the way, I saved his life. [He] has not thanked me. [Laughs] I don't know. There isn't anyone as silly and as easy a target as Rush. I'm just going to have to hunker down and actually get more substantive and just go after the whole Bush administration. I'm flirting with a couple of ideas right now.

What's your favorite Bushism to date?

Of course, my favorite is, "I don't mind being misunderestimated."

Which is more offensive to you -- Vice President Cheney's $20 million golden parachute from Halliburton or a speech by Louis Farrakhan?

It depends which speech. [Laughs]

Are you convinced that Cheney and Bush's refusal to impose price caps in California has anything to do with protecting their own oil interests?

This past April, Barbra Streisand issued a memo essentially calling Democratic leaders a bunch of weak-willed wussies. Do you agree with her assessment of the current party?

You know, I think Hollywood celebrities have a big role to play. For example, on the environment, not too many people realize this, but Hollywood celebrities make up just 0000000000.1 percent of the world's population ... and yet consume nearly 36 percent of its resources. Seventeen acres of rain forest are consumed every day by Barbra Streisand alone.

Describe the experience of hosting the White House Correspondents Association dinner -- it seems like a tough crowd to win over.

They're both easy and hard. They're easy in the sense that it's like a trade association. It'd be like doing the scrap metal convention if I knew an incredible amount about scrap metal. So, you can do jokes there about Dennis DeConcini [former Arizona senator] and they'll laugh. That's the good part. The bad part is they are looking to be offended. They will do everything they can to find a way to be offended.

Do you get more satisfaction writing books, TV shows or films?

It's all pretty much the same. I get satisfaction when I write something I like, when I'm happy with it.

If it's possible to be objective, can you critique "Saturday Night Live's" coverage of the political scene compared to when you were writing for the show?

I thought the stuff Jim Downey did this year was brilliant. Jim did the debates and I think he really revitalized the show in terms of its political stuff.

Do you ever get the itch to return to "SNL"?

Every once in a while, I feel it would be nice to be there this week. But I did 15 seasons on it, and unless something really interesting is happening I really don't get that nostalgic.

In a fight between Stuart Smalley and Mary Matalin, who would win?

What inspired you to become so politically oriented?

My parents were really political. The news was very important in our home. We basically had dinner every night while watching the news and then we'd discuss it with our parents. My dad had been a Republican all his life until 1964, when he switched because of [Barry] Goldwater's stand on the '64 Civil Rights Act. And my mom had been a Democrat. Until '64, there had been that sort of back and forth. The civil rights movement was very important in my house and then Vietnam was very important 'cause there were two boys, so I came of age during a very heated political climate.

Have you ever thought of becoming a political strategist à la James Carville?

I've offered to give advice and stuff like that, but they don't take me seriously.

Who would you like to see as Democratic presidential candidate in 2004?