The veteran comedian is in trouble with the militant disabled for using words like "cripple" and "pity." They're wrong; he's right. 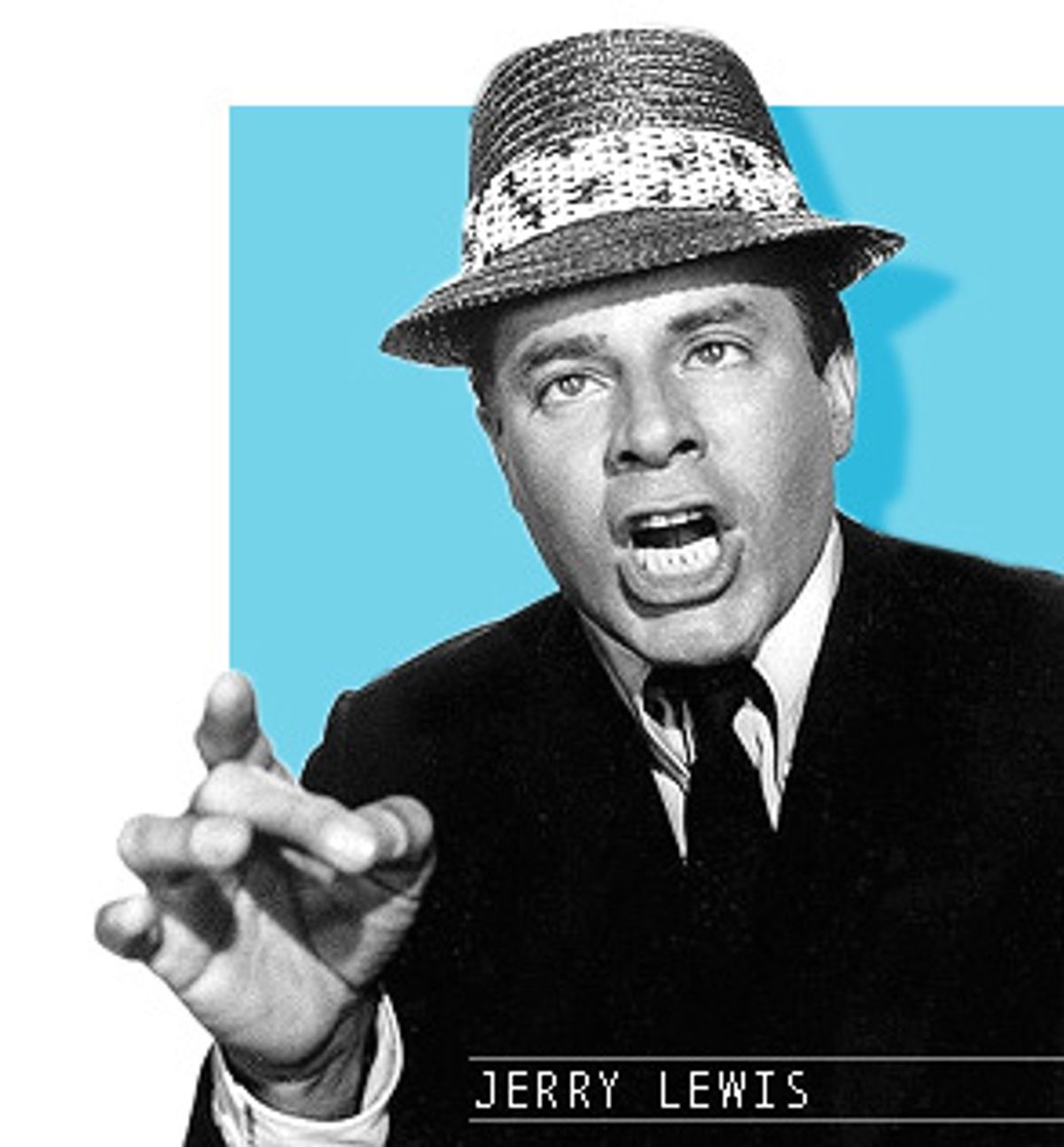 Sometimes we forget that comedian Jerry Lewis started his career 50 years ago in a nightclub in New Jersey by acting like what we used to call a "retardee." He would cross his eyes, galumph about, drool and give his straight man Dean Martin a big wet kiss (on the mouth). I even remember him falling off the stage and clambering back up the steps, acting like a regular gooney bird. It's an act that he continued, in his movies, long after he'd split from Martin. It wasn't just funny -- it was pee-in-your-pants funny.

As he has for years, Lewis continues to headline the annual telethon for the Muscular Dystrophy Association. It's no accident that "Jerry's kids" sometimes move about not unlike the comedian of yore. The "Merck Manual of Medical Information" defines "muscular dystrophies and other myopathies" as "muscle weakness causing waddling gait, toe-walking, lordosis, frequent falls, and difficulty in standing up and climbing stairs." Sounds just like the Jerry Lewis I remember from back in the day. He is, in more ways than not, one of his beloved kids.

And, like a kid, Lewis is always getting in a fix. Recently, while being interviewed on the "CBS Sunday Show," he said, "I'm telling you about a child in trouble. If it's pity, we'll get money. I'm giving you the facts. Pity. You don't want to be pitied because you are a cripple in a wheelchair, stay in your house."

As usual, it raised a few hackles among the militant disabled but, in truth, he's right. We disabled will always evoke pity. And if we want to get away from it, we damn well better stay at home.

Yesterday I was at the Piggly-Wiggly and I got the security guard to download my wheelchair from the car to the pavement. As he helped me get in, he said, "I'm just hopin' that my friend won't be using one of these the rest of his life." I asked him what he meant and he said, "He got in a wreck last week. Drunk driver. They cut his legs off here [motioning across his thighs]. I just hope he won't be in one of these things the rest of his life."

I, of course, agreed with him.

That kind of stuff used to drive me up the wall. Here I am, trying to slip through life without anyone knowing that I'm a hopeless cripple and people are forever and a day patting me on the head, telling me that God will never give me something I can't handle. Then, five will get you 10, they'll start in on an anecdote about one of their friends or relations who are "in the same place you're in." Fights, falls, cancer, car wrecks, diabetes, amputation, hunting accidents, stroke -- I've heard them all.

I'd be a fool not to see pity in their words. But I would also be a fool not to accept their words with, God help me, a touch of forgiveness. It used to drive me bananas, this cut-off-at-the-knees stuff, but something has mellowed me. Security Guard is reaching out in the only way he knows how. He means no harm. His pity is part and parcel of me and my life and my wheelchair and, I would guess, everything else having to do with life in the world around us.

Despite my disabled brothers' and sisters' outright loathing for Jerry Lewis, he's probably right. He's playing the pity card, in spades, and it works. Those little kids, the young and the innocent -- cut down in the bloom of life. They've been given something that should never have been. They have learned at age 5 or 10 or 15 what it is like to be 80 or 90 years of age.

As a result of Lewis' work, the MDA is one of the richest foundations in this country. Last year, it took in over $150 million. That's 150 million smackers in cold, hard cash. Its total assets are close to $200 million. Its expenses are somewhat out of hand, but it spends $15 million a year on research, and an additional $40 million that goes to grants, allocations and assistance to individuals. The MDA's director is paid $350,000.

Lewis knows the vocabulary of crippledom as well as I do. Just like me, he's been around. He has to look no further than New Mobility, the hottest magazine in the disabled world, to see the word "cripple." The pages are peppered with it -- along with "gimp" and "crip" and, every now and again, from the likes of shameless writers like me, "basket case."

We don't call ourselves "disabled" with our fellow crips. We wouldn't be caught dead saying "differently abled." The word of choice is "crippled" -- and it's an ancient and honorable word. The Rev. W.W. Skeat, of etymological fame, tells us it comes from the Anglo-Saxon word "creopan" -- to creep.

I guess that the only people who are going to shy away from it are those proper folk who like to complain about Jerry and me and the kids. We just think it's a commonplace word that's honest and true.