In an exclusive interview, the Arizona maverick says he really isn't leaving the GOP to run for president. Really. 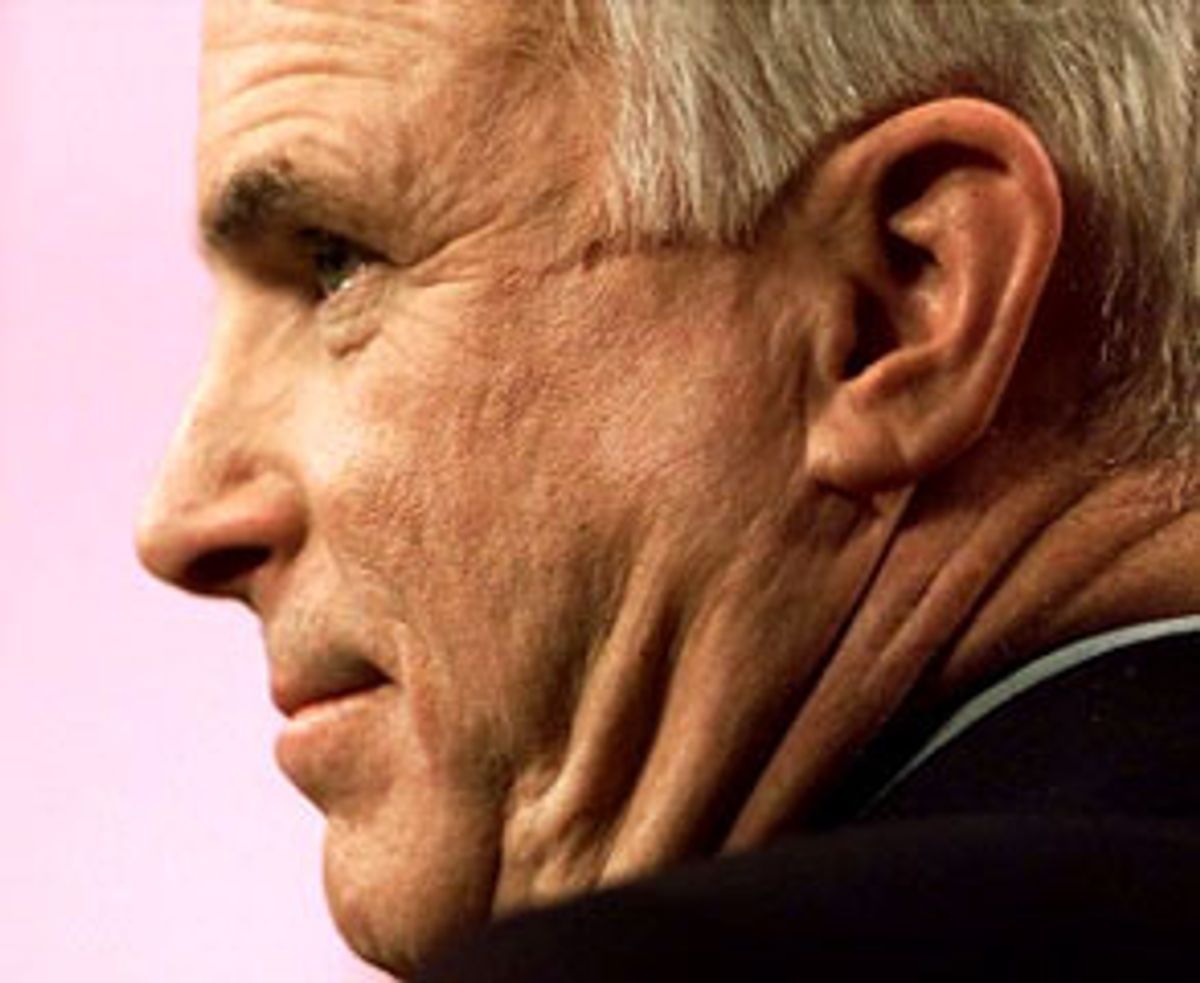 "Almost everything I do, there's a certain exaggeration factor because I do it," says Sen. John McCain, R-Ariz.

We're sitting in his Senate office. The scar from his cancer surgery that zigzags on the left side of his face and neck is healing but is still a bit jarring. His mood is weary.

So much of McCain's power -- his ability to get controversial legislation passed, the successes of his underfunded campaign for president, his strong national poll numbers -- comes from the fact that reporters were and continue to be fascinated by his every move. His shoot-from-the-hip style, combined with a restless -- sometimes reckless -- challenging of the status quo, plus a compelling bio, means that lots of us in the Fourth Estate find him fun to cover. Not to mention a good story. But that doesn't mean that McCain always enjoys it, or benefits from it.

He certainly didn't care for the frenzy that erupted over the weekend. He was irritated by what he sees as an out-of-control media reaction springing from unsubstantiated claims in the press that McCain was planning -- or even talking about -- becoming an independent and beginning to prepare for a 2004 run for the presidency. The story's just not true, he says. McCain's inner circle of advisors denies ever having rapped with the senator about jumping parties or running for president.

(Even the story that started the whole domino-tumble never shows any evidence that McCain has ever had the conversations in question.)

McCain's innocence of the charge that set a thousand pundits' mouths a-whirlin' doesn't mean, however, that the hell-raiser hasn't played a role in the creation of his own quixotic and unpredictable myth. Tuesday morning, for instance, the office of Sen. John Edwards, D-N.C., calls McCain's office. Edwards -- McCain's Democratic partner in the patients bill of rights legislation and a possible 2004 presidential prospect himself -- has an invitation for McCain to join him. On the radio. On the Democratic radio response to President Bush's Saturday message, that is.

Edwards is going to talk about their bill, and wants McCain to join him in what would be an unprecedented Republican rebuttal to a Republican presidential radio address.

Upon hearing this, McCain's closest advisors -- chief of staff Mark Salter, political director "Sunny" John Weaver -- laugh. When Salter later tells McCain about it, McCain shakes his head "no," with an almost confused expression on his face.

McCain's in a somber and reflective mood that might outweigh the gravity of what he went through. What senator -- or president -- wouldn't love to have the press speculating on what he's going to do three years down the road?

But McCain -- in his first interview after a weekend of chaotic speculation -- insists that the attention that accompanied the long-planned weekend trip of Senate Majority Leader Tom Daschle, D-S.D., and his wife, Linda, to McCain's Cottonwood, Ariz., ranch home was a pain in the ass.

"I think that the unfortunate combination of the Daschle visit and the speculation because of the [Sen. Jim] Jeffords switch all kind of became a combustible blend that in and by themselves probably wouldn't have generated so much publicity," McCain says. His statement after Jeffords' defection, a May 24 admonition for the Senate GOP leadership and its K Street allies to start showing other mavericks some respect -- "Tolerance of dissent is the hallmark of a mature party, and it is well past time for the Republican Party to grow up" -- probably helped fan the flames, too.

Regardless, what erupted Saturday morning left him "literally astounded. Every time I turned around on television there was another story. Television cameras chasing the car up to the cabin. I was really flabbergasted by it."

Worse for him were the usual snarks and barbs from the conservative and right-wing press. "The attacks have been pretty ferocious on me," he says. "The interpretation by some that this is somehow me seeking media. I get enough media coverage without doing something like this!" he laughs.

"People were: 'Ahh! Daschle went to stay with him!'" McCain says, seemingly unable to comprehend why anyone would wonder about the visit of a Democratic leader to the ranch home of an outspoken party critic just days after another independent-minded Republican switched parties, putting the Senate into Democratic hands. "I came to the House in '82 with Daschle!" McCain says. "We came to the Senate in '86 together. I've known the guy for, what, 18 years now. It's not like 'Hey! I just met Tom Daschle.'"

It all indeed may have been innocent enough -- and everyone insists that the trip was set up in March. But there are other reasons why the media speculation heated up.

McCain's statement to the press Saturday may have shot down some journalistic speculation about conversations the newspaper could never quite show McCain having engaged in in the past, but it sure left wiggle room for the overall possibility of the story's premise. "I have not instructed nor encouraged any of my advisors to begin planning for a presidential run in 2004," McCain said in the written statement. "I have not discussed running for president again with anyone. As I have said repeatedly, I have no intention of running for president, nor do I have any intention of or cause to leave the Republican Party. I hope this will put an end to further speculation on this subject."

"I don't know how to be much more definitive," McCain says. "I envision no scenario. I'm not going to do it. You know?"

Then there are the chats that Democratic senators -- Daschle, Edwards, Sen. Ted Kennedy, D-Mass., Sen. Harry Reid, D-Nev. -- have had with McCain, pre-Jeffords talks about party hopping.

We get it, John, they told him. We understand you. We understand your appeal, your fights for the little guy. Become an independent and join our caucus. We respect you, we'll treat you like a king -- quite unlike how your fellow Republicans treat you.

"I don't think they ever thought that I was going to switch," McCain says. "I think they thought that maybe they had to say it. But I never saw any excitement: 'Oh, gee, I think we're going to get him!' I think they realize my loyalty to the Republican Party."

The bottom line, however, is that McCain could well leave the GOP if he felt it appropriate. He often feels mistreated by the party leaders in the Senate and the White House -- "What they did to Jeffords times a thousand," says one staffer -- and often thinks the GOP is more about money and power than anything else.

And it's possible, though unlikely, that he may run for president as an independent, like his hero Teddy Roosevelt. Such things are quietly understood by those close to him.

The speculation will not end with this story, he knows.

"But that doesn't mean that I have ever discussed such a thing with anybody because I know how dangerous it is," he says.

Dangerous? "It would just be foolish of me to do that," he says. "Because I don't contemplate it at this time. So why would I want to talk about it?"

Otherwise, what happened this weekend would happen, but worse. "I think it's starting to subside," McCain says. "[Rush] Limbaugh and those people will continue for God knows how long, but generally the mainstream media seems ready to move on, too."

"Moving on" for McCain means moving on to the issues he wants to discuss, issues that aren't a part of his immediate tasks today. Tuesday's a big day for McCain. Since everyone's preparing for the first day the Democrats have ruled the Senate since January 1995, McCain has a meeting with some fellow GOP Senate former committee chairmen -- who will be guided by the transition team now-Minority Leader Trent Lott, R-Miss., handpicked to negotiate the change of power (GOP Sens. Orrin Hatch of Utah, Mitch McConnell of Kentucky, Phil Gramm of Texas, Pete Domenici of New Mexico and, as an act of affirmative action for GOP moderates, Arlen Specter of Pennsylvania) -- to talk about what they should do next.

McCain will be handing over the chairmanship of the Commerce Committee to Sen. Ernest "Fritz" Hollings, D-S.C., a man with whom he has worked well, though they disagree on most issues. Where McCain is a big deregulator, Hollings is preparing to hold hearings showing the need for more regulations -- far beyond where McCain would go -- on local phone company competition, trade, airlines, Internet privacy, violence on television. McCain says he plans to take the time once spent on being a committee chairman and spend it on the reorganization of the military.

Also, he and his wife, Cindy, were preparing to dine Tuesday night with the first couple at the White House.

"I think it will be pleasant," he says, not entirely convincingly. One of the major reasons for the bad blood between Bush and McCain is the personal filth Bush's campaign and its surrogates threw at the senator and his family during the South Carolina primary campaign. McCain thought it dishonorable, and to this day grits his teeth when the subject is raised. If Bush were ever to apologize for the attacks -- at least for not condemning them when they were going on -- you wonder whether the dynamic between the two men would change, and how that would change the face of American politics. But to this day, that conversation has yet to happen.

"I imagine there will be some time when we talk about the issues, but it's primarily social," McCain says. When Bush called him over the weekend, "he told me, 'Let's work together on issues.' He wasn't specific."

McCain says that they could work together in a number of areas -- fighting pork-barrel spending, or working on an HMO patients bill of rights, where "I don't think we're that far apart." Of more consequence, McCain articulates one of the frustrations he's expressed before, one bit of kindling that was part of last weekend's media conflagration. "The White House has not consulted me or communicated with us at all" on any issue, McCain says. "I hope that we can start communicating on [the patients bill of rights] and a number of other issues that are important."

It's unlikely that Tuesday night's dinner will do much to bridge the gap between the two men, though arguably both would benefit from at least a temporary cease-fire and cooperation on some issues. Otherwise, publicized nonevents -- like when McCain, already scheduled for a trip to Ireland with several other senators, declined the opportunity to accompany Bush on his controversial trip to California -- will continue to generate political gossip that overshadows more substantive matters.

Moreover, McCain needs to be seen as willing to work with the president where possible; Bush -- stumbling in the polls like Jenna at a kegger -- needs to shore up some credibility with independent voters. In many ways, McCain is exactly where the latest polls indicate the American people would like Bush to be: working with Democrats on bipartisan legislation, protecting the environment, supporting a patients bill of rights, closing the gun show loophole.

But the gulf created by last weekend's brouhaha can't have helped. "Some of this is fueled by supporters," McCain says. Some of the media reports about McCain's refusal to completely and absolutely shut the door on either scenario seem to come from allies outside his immediate inner circle. "I understand that. And some of this is fueled by some of the Bush people," McCain says. Much of the trash talk about McCain made to reporters by senior White House advisor Karl Rove oozes its way back to the Arizona senator sooner or later. (Rove wouldn't return a call for comment.)

McCain is not complaining, he says. "There will continue to be speculation," he acknowledges. "I understand that. 'Will McCain jump? Or run as an independent? Or --'" He stops himself.

"You know, there are a variety of scenarios."