So many women, so little time

Young and old, fat and thin -- Jan Saudek's camera makes love to them all. 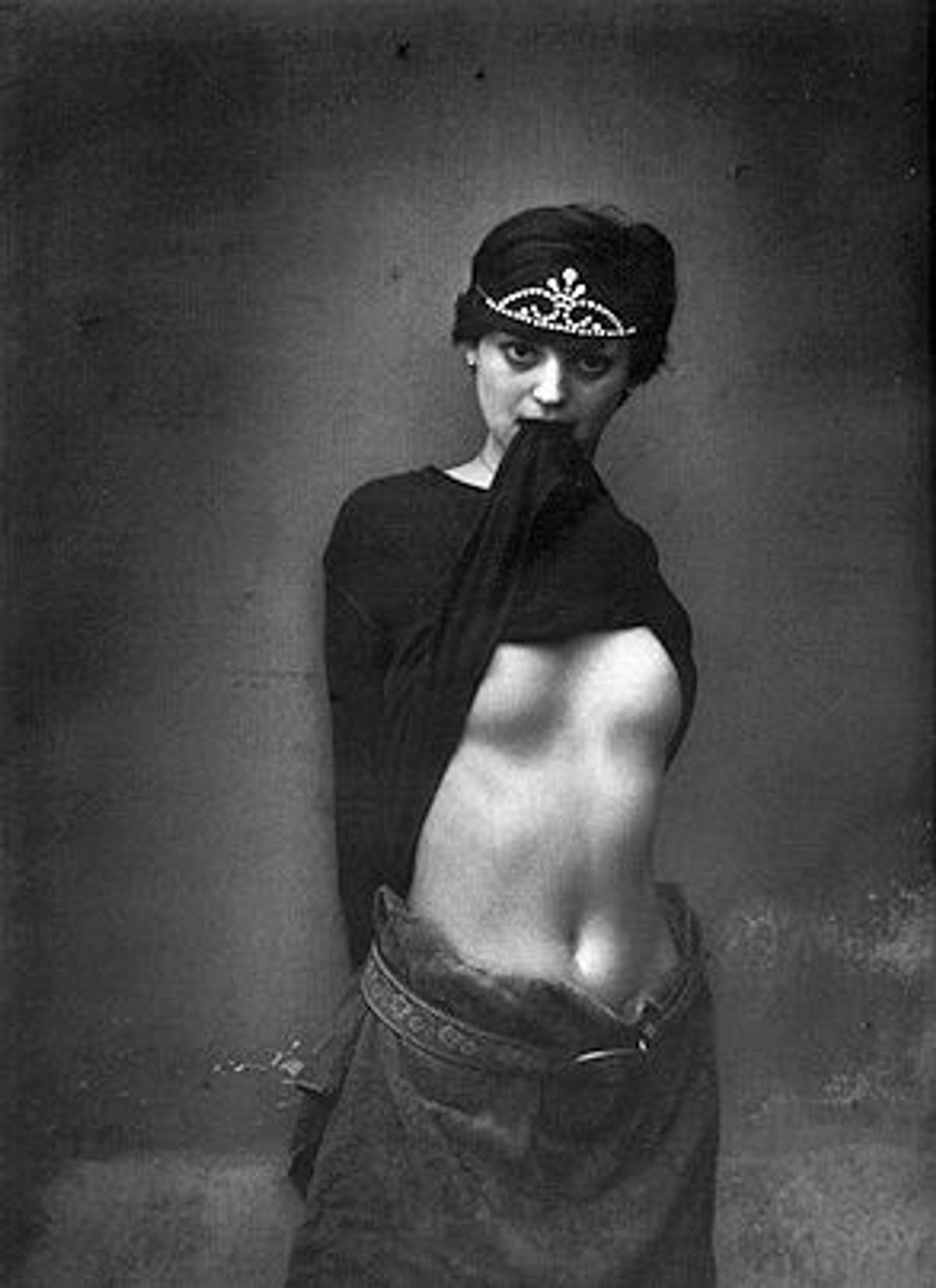 Jan Saudek doesn't mind admitting it: He likes a woman with a fat ass. Unlike fellow erotic photographers such as Helmut Newton, whose Euro-babe models seem to subsist on a diet of champagne and heroin, Saudek, 66, happily dives head first into the mountains and valleys of jiggling flesh proffered by his mostly Czech trollops. Plus-size beauties are a recurring theme in his work. Sometimes they bend over while Saudek spanks their glorious, globelike keisters with handfuls of switches. Or they might spank each other, skip rope or simply crouch nude on all fours with wildflowers crowning their heads and saggy green socks on their feet.

Indeed, in one of the Prague maestro's favorite hand-tinted, sepia prints, titled "The Burden," Saudek stands nearly naked with his back to the camera while his former wife, Maria, sits atop his shoulders -- her creamy, gargantuan derrière apparently having swallowed Saudek from the neck up. Looking at that woman's divine posterior, bathed as it is in blue, one fantasizes about drowning in the folds of her massive sex.

Yet Saudek doesn't want folks to think he's all about the booty, or perversely obsessed with obesity. "I hate to read that I am the photographer of fat women," Saudek complains via phone from the Czech Republic. "I am the photographer of everything; even landscapes I've tried. But I admit that though my girlfriend is skinny, I admire fat women and love them. They are so natural in front of my camera because they know I'm not making fun of them or trying to humiliate them. They know I'm serious. Next Sunday, I'll have the greatest session with three extremely fat ladies and one skinny guy. I can't wait!"

Saudek's enthusiasm translates into gold. Published by Taschen and renowned worldwide for his raunchy, kitsch-filled postcards that hark back to late-19th century portraiture, Saudek is a living, breathing anachronism with his use of painted black-and-white photos, his fondness for 1940s-era cameras and his posed shots of "naughty" scenes using a variety of antique props.

The enormously prolific Saudek has been wildly popular in Europe since the '70s, despite communism's tyrannical stranglehold on Czech society up until the 1989 Velvet Revolution. And his ubiquitous presence on postcard stands from Los Angeles to Paris speaks to his uncanny ability to tap into the tastes of construction workers and intellectuals alike. French magazine Photo recently referred to Saudek as the creator of a uniquely "baroque and decadent universe."

Truly, Saudek's is art with dirty fingernails, epitomizing what the French refer to as "nostalgie de la boue," a longing for the gutter.

"The only French I learned from the few French girlfriends I've had is 'Je suis primitive.' You understand? See, I'm not a very complicated guy. I'm a very plain guy, and I put it straight. Several times I met Mr. Joel-Peter Witkin in Paris and here in Prague, and I like his work, but it's too complicated for me. I prefer to make art for the masses, not for a few intellectuals," Saudek declares.

In keeping with this sentiment, every aspect of human femininity is represented in Saudek's earthy, erotic buffet: a whorish woman with floppy veined tits and a mouth oozing semen cocks her head back brazenly; an auburn-haired temptress with a bush so thick you could grow mushrooms in it bends an arm back behind her head and licks her equally hairy pit; two half-clothed strumpets, one tall and thin, the other short and round, copulate like dogs, the tall one sounding a victory note on a brass horn while gripping the other's ass; a wrinkled matron with gray hair (Saudek's mother) disrobes while holding a framed photo from her youth before her chest; and a teenage girl, boyish in build, sits on a stool covered in rough fur, her wrists crossed in front of her pussy.

Though Saudek's pictures are regularly used to illustrate magazines worldwide, he has turned down offers from Czech Playboy to shoot centerfolds and he generally dislikes the sort of models who look like they've emerged from the pages of a high-end stroke mag.

"Once, a Playboy Playmate from the Czech Republic asked if I would take some photos of her," recalls Saudek. "I said, 'No, no, no.' But after a year of trying, she was successful. So I shot her, and it was a disaster. She was beautiful, but there was nothing on her I could hold on to. A model must be natural. She must be a human being, a real person. That Playboy Playmate was artificial. I lifted up her breasts to see if there were scars from implants, and they were real! They just looked fake. Still it was no good. I cannot work with mannequins. With them I fail."

Saudek's egalitarian biases, his avoidance of the sort of Swimsuit Illustrated supermodel who dominates world consciousness these days and his delight in visual excess spring from his fervent belief that an endless variety of women constitutes his greatest happiness. (Saudek freely admits that many of his female subjects have been his lovers.) In this Saudek resembles Marcello Mastroianni's suave roué in Fellini's "8 1/2" or, even more closely, Tomas, the Czech Lothario of Milan Kundera's novel "The Unbearable Lightness of Being," whom Kundera calls an "epic womanizer." Such a man, Kundera writes, "projects no subjective ideal on women," and since everything interests him, disappointment is a rarity. It's a description readily applied to Saudek as well.

Actually, most of Saudek's life reads like a Middle European bildungsroman. He was born in Prague in 1935, an identical twin of his "older" brother, Karel, who went on to become a successful Czech illustrator. He remembers watching Nazi tanks roll through Prague in 1939, and seeing men and women shot dead in 1944 as World War II roared to a conclusion. Saudek's father, a Jewish banker, survived the concentration camp Theresienstadt, the only brother in his family to do so. At the age of 15, Saudek got his first camera, a Kodak Baby Brownie, and apprenticed at a photo lab. Around this time he composed his first picture, but gave up photography, he says, when people derided his efforts.

In 1959, wife No. 1 gave him his first "real camera," a Flexaret 6x6, which he still uses. The other camera Saudek prefers, for you shutterbugs out there, is a Rolleiflex Model 49, the actual one used by photojournalist Giselle Freund to capture Evita Peron for a famous Life magazine essay in the '50s. (Though Saudek owns several expensive automatic cameras with all the gizmos, he says he's saving them for when he's too old to shoot otherwise.)

During the '60s, he pursued photography with a passion, and had his first exhibitions in Prague and abroad. His photos of young, topless couples in blue jeans with bare, dirty feet capture the youthful exuberance of the times.

That exuberance was crushed by Warsaw Pact soldiers in the aftermath of the 1968 Prague Spring, yet Saudek continued to ply his trade. The KGB routinely harassed him, and he was forced to live in a dank, moldy cellar with a window looking out onto a light well. Required to work under the communist system as a laborer in a printing factory, Saudek turned that window into a symbol of hope in his photos -- giving copies to visitors, who then smuggled them to the West for sale or exhibition.

"That window meant freedom for me," says Saudek. "So in the '70s, when the time here was the worst, I made plenty of pictures of open windows, which went nowhere, but it was a kind of substitution of freedom for me. As for the exhibits overseas, it was all piracy. Sometimes people paid me, sometimes not. I didn't care. It was better to be exhibited and not paid than not exhibited and not paid. It all really got going with the postcards. In Belgium and Holland, they made over 100 postcards of my works. I've never been paid for them, and they're still in circulation. But it was better than nothing. I got money from other sources, anyway. I didn't want to be a little guy."

In 1984 Saudek, with the help of friends, was admitted to the prestigious Union of Czech Visual Artists, which meant he no longer had to work in the factory. Having its stamp on his I.D. equaled freedom from more than three decades of drudgery. Saudek was already wealthy through sales abroad, and as the Russian empire lumbered toward the graveyard, Saudek's fame and wealth multiplied. Now, three wives and countless mistresses later, he is single, in good health and a millionaire -- an enviable position for any man, especially a sexagenarian.

Regrets? He has a few. "If I had been born in a free country, I would probably be the greatest photographer in the world now, because in my 30s and 40s I would have been able to enjoy my models, my cameras, my dreams. Still, the small amount of work I've done is enough to give me a beautiful living. For me, the time is greatest right now. I'm free, and my country is free after years of communist oppression," he says.

Saudek, who still owns the flat, recognizes its importance to his legend. "That basement was sort of an inferno or purgatory for me," he recalls. "People are always shocked when they see that it's only a few square meters, but it was very, very sexy. You never know what location will make a person horny. Now I have several studios, and in each I have a false wall arranged for a backdrop, which looks almost natural. Sometimes I think of going back to the basement, but I have some sort of mental block. It was very humiliating to live there, in the darkness and the mold, and I hate to remember the bad times. I only want to remember the good times -- the booze, the music, the lovers and so on. Like now."