"Yes, Columbia, there is a David Manning" 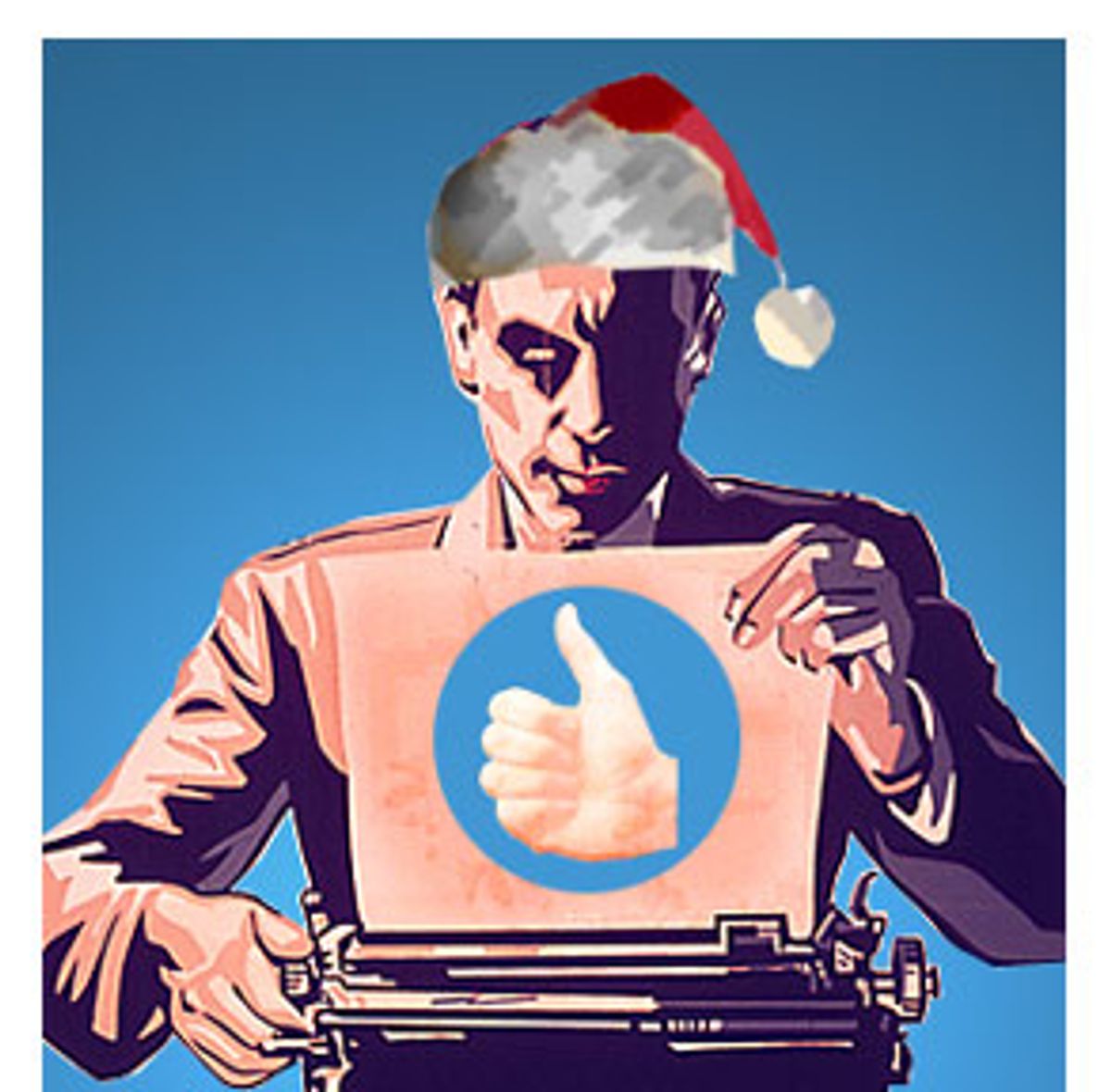 I am 77 years old. Some spoilsports say there is no David Manning. I will not believe it until I hear it from you. Please tell me the truth. Is there a David Manning?

Columbia, the naysayers are wrong. They have been affected by the skepticism of a skeptical age. They cannot believe what they see right there in front of them, in newspaper ads and on skyline-choking billboards. They think that nothing can be that wasn't generated by a tangible person using critical faculties to judge increasingly empty movielike contraptions. All opinions, Columbia, whether they spew from mustached TV critics or snotty-nosed fourth graders, are little. In this great universe of ours, audiences are mere insects with disposable income; their ant-size intellects cannot properly grasp the ceaseless bedazzlement of carefully packaged product.

Yes, Columbia, there is a David Manning.

He exists as certainly as merchandising and box-office receipts exist, and you know that they abound and give you fancy cars and houses in the Hollywood Hills. He exists in such blurb-ready words as "mesmerizing" and "triumphant," and in the magical phrases "this year's 'Rocky'" and "a nonstop roller coaster ride." He exists in pun-based adulation, in action pics and chick flicks, in fireballs and blue screens.

Alas! How dismal the world would be if there were no David Manning! It would be as dismal as if there were no Columbia Pictures! There would be no lines around the block then, no poetry, no romance, no absurdly overpriced concessions: nothing to make this existence tolerable. Gone forever would be the Burger King tie-ins full of dazzling plastic playthings for the little ones to choke on. No more logo-emblazoned pajamas, no character-driven lollipops, no ritualistic repeat viewings. In a word, Columbia, there would be no happiness. Existence removed from the illumination of sweeping klieg lights is a dim existence indeed.

Not to believe in David Manning?! You might as well not believe in Mel Gibson. You might as well resist the manufactured truism that audiences get what they want, rather than taking whatever they're given. Why not dismiss "Pearl Harbor" as a crass wallow in false patriotism, void of human emotion, worth viewing only for the explosions at its creamy center? Why not pretend that Roberto Benigni won an Oscar for making faces and hopping around like a monkey? Hollywood tells us these things aren't true, so we must believe them. People who think too hard, Columbia, ruin the fun and taint word-of-mouth.

You could get an investigative reporter to watch the critics' screenings. But even if he did not see David taking notes, what would that prove? Nobody sees David Manning, but that is no sign that he's not there. The most real things in the world are those that writers and children cannot touch, such as net profits and digital spaceships. Have you ever seen a truly good Rob Schneider movie? Of course not, but that's no proof that his movies aren't good. No one can conceive of all the unseeable wonders that a marketing department can conjure.

You tear apart a film executive's heart to see what makes the noise inside, but there is a vast curtain covering the unseen world which not even Roger Ebert can open. Only money, advertising and greedy stockholders can push aside that curtain and view the glories that lie beyond mundane comprehension. Is it real? Ah, Columbia, in all of Los Angeles there is nothing else as real and abiding.

No David Manning? Thank God he lives. A thousand years from now, Columbia, nay 10 times 10,000 years from now, he will continue to lighten the hearts of second-rate filmmakers and desperate studio heads the world over.

Paul Tatara has been a film critic for CNN.com since 1997. His screenplay "The Almost Perfect Game," about Boston Red Sox iconoclast Bill "Spaceman" Lee, is currently being developed for actor Woody Harrelson.