Long before the Sixers, the city was known for basketball -- but the players were Jews and the stereotypes were all about their "trickiness." 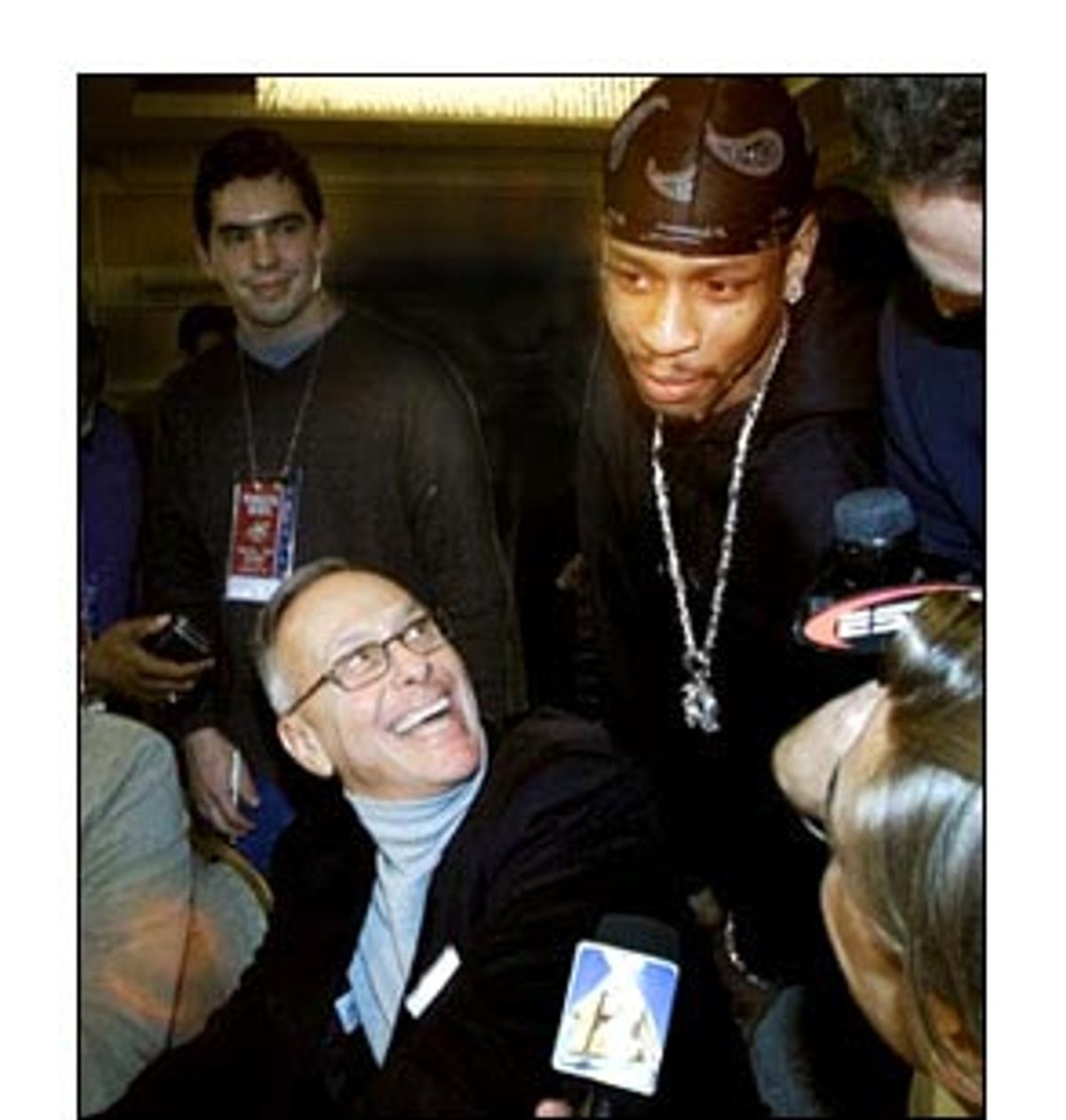 The red-hot Philly basketball team had a pint-sized but flashy star shooter, and an old-school coach who was more teacher than tough disciplinarian. Sounds like America's new favorite team, the Philadelphia 76ers, who stunned the Los Angeles Lakers by taking Game 1 of the NBA Championship Series Wednesday night.

Nope. It's the South Philadelphia Hebrew Association SPHAs (pronounced "spas"), a team that dominated the sport in the 1920s and '30s. The flashy shooter was set-shot expert Inky Lautman. David was the six-pointed star on the team's jerseys. And the savvy coach was Eddie Gottlieb, who was also the owner of one of the most successful teams in basketball history.

Today, the only thing Jewish about the current Sixer team is coach Larry Brown, who starred on the U.S. gold-medal team at the Maccabiah Games in Israel before launching his pro career. Brown was born in Brooklyn, that "other" Jewish basketball town. But there are plenty of parallels between the Hebrews, as the SPHAs were nicknamed, and today's Sixers.

Both were subject to sometimes egregious racial stereotyping. Once the bad-boy rap star of basketball, Allen Iverson has always been praised, even by his detractors, for his incredible athletic ability and lightning speed. But Iverson has never gotten credit for his basketball smarts. For all his athleticism, the wounded warrior and his Sixer teammates are winning with their heads. And anyone who has followed Iverson's remarkable career has witnessed a tremendous evolution in the quality and selflessness, not just the style, of his game.

But such stereotypes reflect a long tradition going back more than seven decades, when the game emerged from the ghettos of Philadelphia, New York and Baltimore. Then, as now, sportswriters used to go on and on about the gaudy skills of "natural athletes" -- but the stars had names like Dutch Garfinkel and Doc Lou Sugerman, and the top teams were the Philadelphia Hebrews and the Cleveland Rosenblums.

"The reason, I suspect, that basketball appeals to the Hebrew with his Oriental background," wrote Paul Gallico, sports editor of the New York Daily News and one of the premier sports writers of the 1930s, "is that the game places a premium on an alert, scheming mind, flashy trickiness, artful dodging and general smart aleckness." Writers opined that Jews had an advantage in basketball because short men have better balance and more foot speed. They were also thought to have sharper eyes, which of course cut against the stereotype that Jewish men were myopic and had to wear glasses, but who said stereotypes had to be consistent?

At the turn of the century, European Jews flooded off immigrant ships into the ghettos of the booming eastern metropolises. New York and Philadelphia were the epicenters of the basketball world, with the dominant team, the Hebrews, ensconced in South Philly.

"Basketball is a city game," notes Sonny Hill, an executive advisor with the Sixers who has run a high school summer league for more than 35 years. "If you trace basketball back to the 1920s, '30s and '40s, that's when the Jewish people were very dominant in the inner city. And they dominated basketball."

From 1918 onward, the SPHAs barnstormed across the East and Midwest, playing in a variety of semipro leagues that were precursors to the NBA. In an incredible 22-season stretch, the SPHAs played in 18 championship series, losing only five. In the early years of the Depression, the SPHAs surpassed both of Philadelphia's baseball teams, the Athletics and the Phillies, in popularity.

"Every Jewish boy was playing basketball," Harry Litwack told me a few years ago, before he passed away in 1999. Litwack starred for the SPHAs in the 1930s before moving on to coach Temple University for 21 years. "Every phone pole had a peach basket on it. And every one of those Jewish kids dreamed of playing for the SPHAs."

"It was absolutely a way out of the ghetto," said Dave Dabrow, a guard with the original Hebrews. Dabrow, who eventually took a job coaching Jewish phenoms at South Philly High, died in 1996. "It was where the young Jewish boy would never have been able to go to college if it wasn't for the amount of basketball playing and for the scholarship."

The first intercollegiate game in the East, a 6-4 shellacking of Temple by Haverford College, took place in March 1894 at the Temple gymnasium. Basketball had a notorious reputation back then. The rules provided for few fouls, making the game a barely controlled melee. There was no out-of-bounds on many courts, which were often ringed with steel mesh. It was common practice to drive an opponent into the fence, and pileups were as frequent as at hockey games today. Players paraded on and off the court with bandaged legs and bleeding heads. This offended the Victorian sensibilities of Philadelphia, leading to a temporary ban on the game at local YMCAs, which were fearful that their Christian boys would be corrupted.

Not so the Jewish, Irish, Polish and Italian communities, filled with the sons of immigrants. The two best high-school squads, Southern and rival Central, were stocked with first-generation Jews. Gottlieb and future SPHAs Harry "Chicky" Passon, Edwin "Hughie" Black, Mockie Bunnin, and Charlie Newman led Southern to city titles in 1914, 1915 and 1916. These Jews introduced a different style of play.

"It was a quick-passing running game, as opposed to the bullying and fighting way which was popular other places," explained Litwack. The best high-school graduates went on to play for one of the church teams, until anti-Semitism heated up. In 1918, Gottlieb and some of his former high school buddies convinced the Young Men's Hebrew Association at Fourth and Reed Streets to buy them uniforms, which featured a samach, pey, hey and aleph -- Hebrew letters spelling "SPHAs" -- and the Magen David, a Jewish star, as team symbols.

The Hebrews played all comers. The players earned as much as $5 a game each -- big bucks for city kids. "Half the fans would come to see the Jews get killed, and the other half were Jews coming to see our boys win," Gottlieb once said.

By the end of the 1921 season, the SPHA uniforms had become too ragged to wear, but the YMHA couldn't come up with the money for new ones. Gottlieb, Black and Passon started a local sporting goods store, Passon's, which also paid for uniforms. With that crisis resolved, the SPHAs ventured out into the world of traveling semi-pro ball, retaining their team name and Jewish identity.

The team's success attracted up-and-coming stars from Jewish ghettos along the East Coast, including New York favorites "Shikey" Gotthoffer, Red Wolfe of St. John's and Moe Goldman of CCNY. Even when the college basketball champion St. John's team, dubbed the Wonder Five (four Jews and a Protestant started on the 1929 team) after amassing a 70-4 record in three seasons, moved intact into the American Basketball League as the New York Jewels, it was the SPHAs who dominated.

With the emergence of Nazism in Germany and an escalation of anti-Semitism in the U.S., basketball was sometimes a brutal experience. The Jewish players faced incessant racial slurs and biased officials in the small towns in which they played.

Tuesday night doubleheaders at the YMHA at Broad and Pine streets attracted crowds of 1,500 or more to watch Lautman, Passon, lady-killer Kaselman and Gottlieb display their skills. At the height of their success, the SPHAs were one of the best teams in the country, sweeping their league's games and challenging teams in other cities. Among their chief rivals were the Rosenblums, founded by a clothing store magnate; the New York Celtics, a powerful Jewish-Irish team; and the New York Renaissance, the premier Negro team.

The encounters between the "Yids" and the "Niggers" were legendary. The Rens were flashy by the standards of the 1920s, though they would seem merely methodical today. Thousands of fans of both teams jammed the temporary seats set up in the marvelous Ballroom at Philadelphia's Broadwood Hotel (for at least one season, team member Gil Fitch also doubled as the bandleader for the dances that followed the games), where tickets went for a lofty 65 cents (35 cents for women).

"Usually when the Renaissance would have you licked, the last three, four minutes of the game, they'd start passing the ball around, and the crowd would go crazy," recalled Gottlieb. According to William "Pop" Gates, the star of the Renaissance, who died in 1989, the SPHAs were renowned as a "thinking" team, while the Rens were famous for their "quickness" -- stereotypes about Jews and blacks that endure today.

By the late 1940s, dominion over the urban basketball courts had passed to the fastest-growing group of urban dwellers: blacks who were migrating north from dying Southern farms in search of opportunity. The new generation of Jews began moving on to other pursuits -- not to mention out to the suburbs. The depleted SPHAs eventually morphed into the Philadelphia Warriors, owned by the same Eddie Gottlieb, now nicknamed "The Mogul," who coached the first champions of what became the National Basketball Association. Gottlieb, who died in 1979, eventually sold the team to San Francisco interests in 1962 and became the NBA's official schedule-maker.

The remnants of Philadelphia's basketball tradition rest on the shoulders of Coach Brown, an adopted favorite son. Much to the delight of the celebrity-starved NBA, Brown and Iverson have emerged as the Batman and Robin of modern basketball, an unlikely blend of Old World tradition and hip-hop yet hardscrabble dedication. It would be a fitting tribute to the past if the Sixers, cast as David, should prevail against the Goliath Lakers, thanks to the blending of these two great basketball histories.

Jon Entine is the author of "Taboo: Why Black Athletes Dominate Sports and Why We Are Afraid to Talk About It." He is a National Press Club and Emmy-award winning journalist formerly with ABC and NBC news.