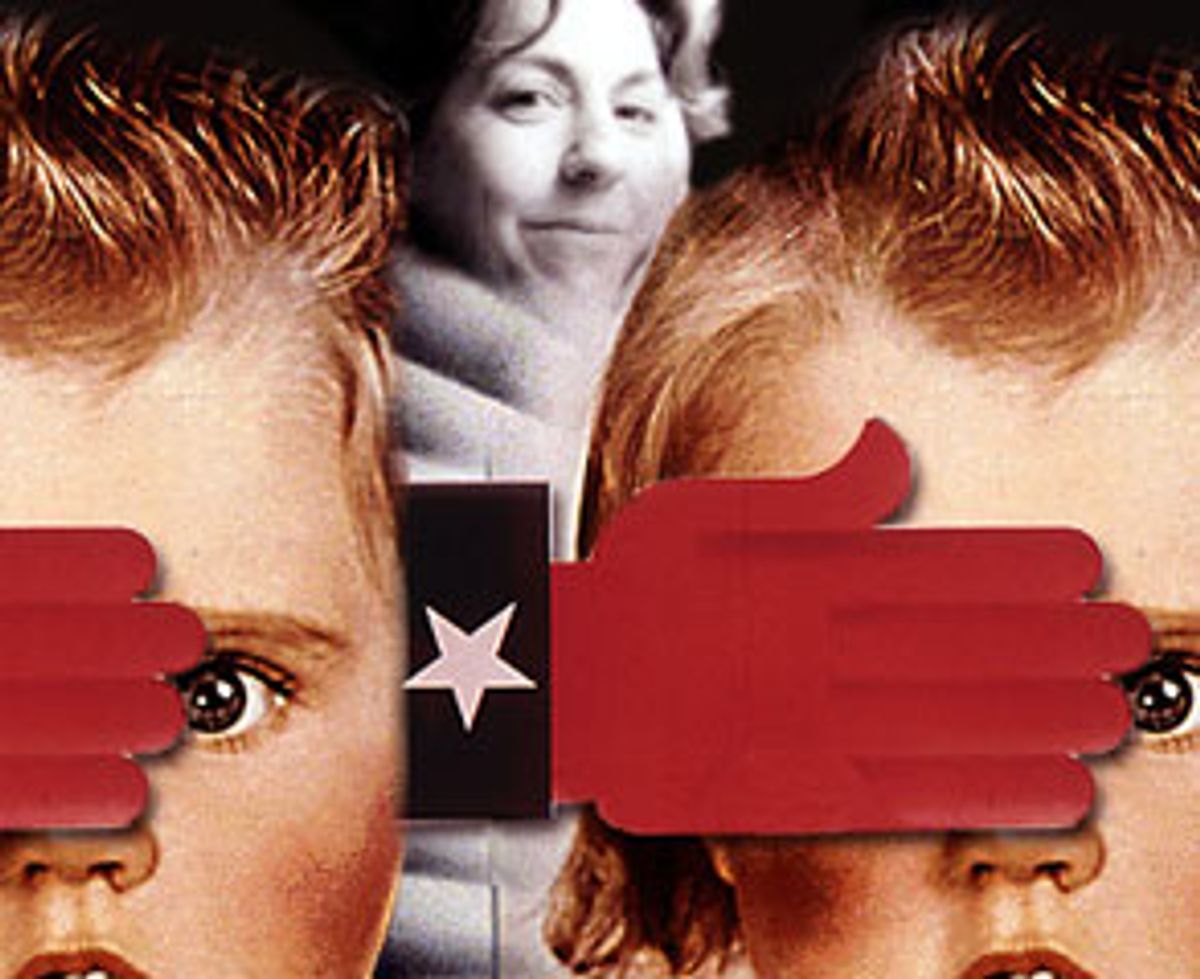 Marjorie Heins, a First Amendment attorney and the director of the Free Expression Policy Project at the National Coalition Against Censorship, has spent most of her professional life fighting censorship.

Over the years, she says, she realized that she was constantly coming up against the assumption that censorship -- from obscenity laws to book banning to V-chips to Internet filters -- could be justified if the material in question presented clear "harm to minors."

"Even people in the civil liberties camp," says Heins, "were of the mind that there is a great social necessity to censor material that minors are exposed to. The debate wasn't going anywhere -- it wasn't even a debate."

What, exactly, is material that causes "harm to minors"? Is it "Huckleberry Finn" or the work of Maya Angelou? Violent video games or R-rated movies? Graphic sexual content or comprehensive sex education?

Actually, as Heins found out, all of the above have been suppressed in the name of protecting children, despite the fact, she says, that social science has failed to provide convincing evidence that exposure to sexual or violent content has any negative impact on minors whatsoever.

Heins decided to trace the history of American obscenity laws to find the roots of the "harm to minors" argument. The result is "Not in Front of the Children: 'Indecency,' Censorship, and the Innocence of Youth," a book that chronicles the ideological and political underpinnings of censorship from Plato to the Victorians to the present day.

Not only have the First Amendment rights of adults been abridged in the name of protecting the innocence of youth, Heins argues; many times, obscenity laws have actually done more harm to minors than good. Because of censorship, many children have not been equipped with the critical thinking skills necessary for living in a democratic society, she says. In some cases, minors have been denied access to information -- like comprehensive sex education -- that could literally save their lives, maintains Heins.

"I would like to move the political dialogue beyond the repetitive media bashing, censorship laws, restrictions on school libraries, Internet filters," says Heins. "It's reached the point of an epidemic. It's not advancing any social purpose."

In a telephone interview from her office in New York, Heins spoke about the fallacy of the "harm to minors" argument, the insidiousness of V-chips and Internet filtering and her belief in the need to replace media censorship with media literacy.

You were involved in ACLU vs. Reno, the case in which the Supreme Court ruled against the 1996 Communications Decency Act. In December 2000, Congress passed a law mandating Internet filters on all library computers if a library receives federal funds. Is a law mandating filters any less censorious than one that criminalizes certain kinds of content on the Web?

The Communications Decency Act was a criminal law, based on an "indecent" or "patent offensiveness" standard. We had plaintiffs from Human Rights Watch to Planned Parenthood to Stop Prison Rape to Wildcat Press, a gay and lesbian press for teens [all of whom would have had their sites blocked under the act]. The Supreme Court agreed with us that "patent offensiveness" was a standard that was much too broad.

After the defeat of the CDA, Internet filtering became more and more aggressively promoted by the manufacturers of the product and political leaders.

In many ways, Internet filters are more insidious than a criminal law, because criminal law looks at the context: whether or not limiting access will be a deterrent, how many people will be affected and so on. But with an Internet filter, you have direct censorship with a very broad brush.

All the filters have to rely on keywords. Some of them claim to be beyond the early, primitive days when they blocked out "breast cancer" and "breast of chicken," "Anne Sexton" and "sex discrimination."

But there is no way that any of these companies can screen over a billion Web sites, many of which change daily, so they have to rely on mechanical means. And no matter how sophisticated your software, you are relying on a machine that identifies words and phrases. About a year ago, a company claimed it could find pornographic images. It turned out that their filters were blocking out landscapes!

Here is another example: "At least 21" and "no one under 18" are key phrases that are often found on pornographic sites, though those sites often have a barrier anyway -- usually, you have to give a credit card number. But these phrases are also found in news reports. I'm looking at my screen right now: "At least 21 people were killed in Indonesia." That site was blocked by Cybersitter.

On top of these examples of unintentional blocking, you also have intended blocking. Almost all of these filters intentionally block access to sex education. Like a lot of us, they can't distinguish between pornography and sex education.

In your book, you point out that the idea that children must be "protected" from sexual knowledge is a relatively new construction. When did this idea begin to take hold?

Obscenity laws were an outgrowth of this need to control the vulnerable child. It wasn't until after an evolution of 100 years, during which all kinds of literary and artistic works were literally burned, that we began to recognize the need for a more liberal standard for adults with regard to obscenity.

Do children and adolescents have the right to free speech?

In theory, they do. The case in which the Supreme Court declared that most clearly was in 1969, when students were given the right to wear black armbands. But that had nothing to do with sex; it was about politics. In the last 30 years, even for nonsexual expression, the court has backed away from protecting students' right to free speech.

Even back in the '60s and '70s, if the content was sexual, the courts had a different standard. The year before the black armband case, the Supreme Court upheld the conviction of a candy store owner who sold a girlie magazine to a 16-year-old under the argument that it presented "harm to minors."

The Supreme Court said that even though there is no documented harm to children from exposure to a nudie magazine, it is essential that the message of disapproval be conveyed.

When you get right down to it, it's more of a moral or ideological, or even symbolic, argument. And what you end up with -- whether it's the Communications Decency Act or Internet filters or the V-chip -- are standards that are indecipherable. Even in the area of pornography, which most people would probably agree is not edifying for children, there is no evidence that occasional exposure will do them any actual harm.

In the book you talk a lot about the fallacy of the "harm to minors" argument. Has anyone ever proven that exposure to sexual or violent content harms minors?

In the area of sexual material, there have been almost no studies on minors. The studies done in the '70s by Andrea Dworkin and others dealt with college students. But nothing has been done with respect to [younger] kids.

In the area of violence, there have been about 200 studies. The psychologists who support these studies claim that it has been proven: Exposure to violence hurts children.

Even if you believe that social science can tell us something about this very complicated area of human experience, when you look at the actual studies, they haven't done so. There are all sorts of problems with methodologies, and then there is shocking manipulation of statistics. You see a lot of alarming, self-serving assertions.

In terms of methodology, the studies that I think are the most compelling are the ones in which researchers ask young adults what media content they remember seeing as a child -- either sexual or violent -- that had a harmful or traumatic or disturbing effect. In the category of violence, you get answers like "Little House on the Prairie" and "The Wizard of Oz." It wasn't what you would expect.

With so much controversy in the social sciences as to whether exposure to violent or sexual content causes harm to minors, why is it that political leaders -- on the left and the right -- continue to assume that the link has been proven?

I was on a media panel a couple of weeks ago, and one of the panelists was a representative of the American Medical Association. A couple of months ago, the AMA joined with the American Psychological Association and signed on to this very dubious statement that claimed that the link between media violence and harm to minors had been proven.

This panelist was very frank: He said, "We signed on to that statement as a political decision. There were things we needed from Senator Brownback, and from Senator Lieberman, and this seemed like a reasonable trade-off."

People like Lieberman and Brownback may be truly offended by some media content. But they are remarkably vague about what, exactly, it is that offends them. If you ask them about a particular movie, "Bonnie and Clyde," say, or "Saving Private Ryan," they all say, "Well, that's OK. I'm talking about bad violence." When it comes to artists like Marilyn Manson, or heavy-metal music, these things simply offend them, and they want to believe there is scientific evidence to back up the notion that these things are harmful.

Are we giving children the tools that they need to live in a democracy as adults when we deprive them of access to ideas that may be controversial? Are there other ways to deal with controversial ideas and media literacy that don't involve censorship?

Media literacy education is a movement that has existed in the United States for about 20 or 30 years. We need a national initiative to bring media literacy into the curriculum. It's far more advanced in other countries -- Canada, Australia, New Zealand and elsewhere.

There are many different theories of how media literacy education should work. Some people who buy into the theory that media violence causes harm nevertheless advocate media literacy, as opposed to censorship, as a way to teach kids to identify what are exaggerated or clearly fantastic messages about violence and aggression or gender relations, to talk about the way cartoons are produced and how different special effects are produced and to put this in the context of their own lives.

And some media education puts camcorders and tape recorders and cameras into the hands of kids and gets them to become journalists and artists and to confront some of these issues about how you create a media message and what it represents. This helps them to be more critical about the music they are listening to and the TV shows they are watching.

If we could take some of this money that is going to pay Justice Department lawyers to defend this endless stream of child Internet protection laws, and use it to fund educational programs for actual children, I think it would be much more beneficial to our kids.