From A to Xena

Those about to have their series finale, we salute you. 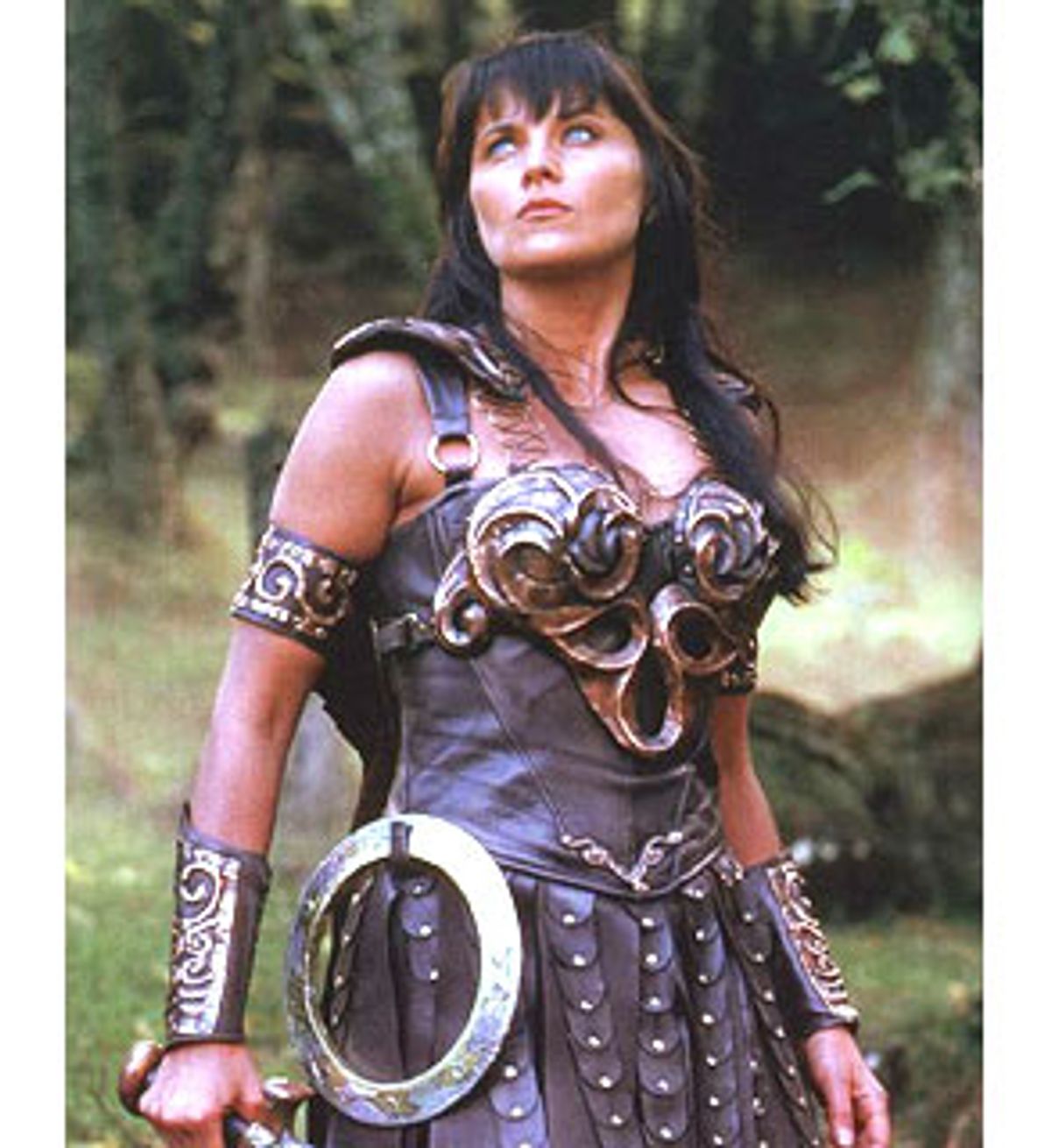 Hail and farewell, "Xena: Warrior Princess." The syndicated action series ends its six-year run this month with Xena journeying to Japan for a climactic samurai-style showdown between good and evil. (The two-part finale airs the weeks of June 11 and June 18; in some cities, the episodes air as a two-hour movie on June 23.)

The character of Xena first appeared on the syndicated series "Hercules: The Legendary Journeys," making her entrance as a merciless warrior with a dark past. But under the tutelage of the hunky Hercules, Xena eventually renounced evil and set off to seek redemption and a syndication deal of her own. With "Xena: Warrior Princess," the statuesque heroine in the metal-studded breastplate and little leather skirt soon amassed a cult following; her Greek and Roman mythology-inspired adventures spanned the globe and defied time, space and, often, logic. But "Xena" was a trip worth taking. Let's salute it now with an alphabet of the show's charms -- from A to Xena.

A is for ass-kicking, which Xena did mightily. Despite that skimpy costume, the formidable Xena was in the forefront of the action heroines who muscled into TV and the movies in the mid-'90s and beyond: Buffy, Nikita, Max on "Dark Angel," "The Powerpuff Girls," Lara Croft, the sword-fighting women of "Crouching Tiger, Hidden Dragon." Xena inspired little girls (and big girls) to superhero dreams.

B is for battle cry. Xena had the best one since Tarzan. Ai-yi-yi-yi-yi!

C is for campy, which "Xena" most definitely was. And that's why you had to love it. But while it was often tongue in cheek, it never turned Xena -- or her fans' faith in her -- into a joke.

D is for death defying. Xena and her sidekick Gabrielle died more times than you can count. In one spectacular demise, they were crucified by the Romans, became angels (well, Xena ended up in hell) and were resurrected by the eternal healing power of love. In the Xenaverse, no goodbye was final.

E is for epic. It may not have had a Hollywood budget, but "Xena" was an epic in spirit, an energetic, affectionate tribute to the sword-and-sandals movies (and Ray Harryhausen mythological spectacles) of the '50s and '60s -- with a nod to literary epics like "The Odyssey" and "Beowulf," just for fun.

F is for feminism. "Xena" was a sly feminist subversion of the traditional hero's tale. Xena underwent all of the journeys, trials and transformations usually reserved for men in myth and legend as she struggled to reclaim her warrior's soul from the dark side. Xena was tutored by two female spiritual mentors; she duked it out with female nemeses. In the Xenaverse, women were realistically complex beings; they were leaders in battle, mothers, queens, concubines, Amazon warriors, healers, witches, poets.

Everywhere Xena went, she spread the gospel of women's equality and wisdom. And how do we honor her in return? With reruns on the Oxygen cable channel that are mutilated by "humorous" little post-feminist comments scrolling across the bottom of the screen. Oh, sisters, you are not worthy of Xena's labors!

G is for Gabrielle. Xena's plucky pal, played by the adorable Renee O'Connor, was an aspiring bard who ran away from her dull village and fiancé to follow Xena to hell and back (literally). Over the course of the series, Gabrielle learned how to wield a fighting staff, became a full-fledged Amazon princess, gave birth to the spawn of an evil deity and acquired a short, fetching hairdo and flattering bare-midriff ensemble. Why did Gabrielle endure all manner of pain and torment (and death, don't forget death) to stick with a woman who was often emotionally aloof and stubborn? See "L."

H and I are for historical inaccuracy. Over the course of her journeys, Xena inspired the Hippocratic oath, defeated Caligula in a chariot race, intervened in the Trojan War and exposed Marc Antony and Brutus as the murderers of Cleopatra. Did it matter that Xena's influence on ancient history was all over the map? Not one bit.

J is for Joxer. Played by Ted Raimi (brother of the show's executive producer, Sam Raimi), Joxer was a goofball for all seasons. The bighearted bumbler worked overtime to become a warrior and a hero, while proving that doofy, pratfalling comedy has been around since the beginning of time.

K is for killing. As the series comes to a close, Xena is held personally responsible for 40,000 deaths. In one episode.

L is for lesbian subtext. They lived and fought side by side. They had little private jokes. They risked their own lives to save each other from harm. In all of their incarnations, they were together. Xena and Gabrielle's unusually close relationship caught the imagination of lesbian and gay viewers, who rallied around "Xena" early on and helped make it a cult fave. The show's writers responded with even more meaningful looks, lingering hugs and, in season four, a famously teasing hot tub scene. (These and more subtextual clues to Xena and Gabrielle's relationship are analyzed in tantalizing detail on the impressive Web site Xena, Warrior Lesbian.) Over the years, peace-loving artist Gabrielle has acted as Xena's conscience and drawn out her "womanly" emotional side; the butch Xena is Gabrielle's protector. The two women have spread a gospel of love and tolerance through the ancient world, defeating cruel, bloodthirsty male gods, warlords and emperors. While the writers have made it obvious that Xena and Gabrielle are soul mates, the friends haven't actually proclaimed their membership in the sisterhood. But the series ain't over yet ...

L is also for Lucy Lawless, a big girl with serious cheekbones, aquamarine eyes, jet-black hair and a slow, drawling delivery crackling with mischief and humor. Largely unknown before she became Xena, Lawless has secured her place as a worldwide pop cultural icon. All those who spent at least one Halloween dressed as Xena, raise your hands!

M is for musical numbers. "Xena" raised its camp level immeasurably with two all-singing, all-dancing episodes, "The Bitter Suite" (1998) and "Lyre, Lyre, Hearts on Fire" (2000). The former was an original operetta fashioned around a rift between Xena and Gabrielle and set deep in a dream world; the latter featured Joxer's flame-y twin brother performing a disco version of "Dancing in the Moonlight" and a very pregnant Xena singing "Sisters Are Doin' It for Themselves." "Ally McBeal," eat your heart out.

N is for New Zealand, where "Xena" and "Hercules" were both filmed. Aucklander Lawless put her native country on the map; now everybody knows not to mess with a Kiwi.

P and Q are for pulp queen. "Xena," like "The X-Files" and "Buffy the Vampire Slayer," forced us to reconsider a genre too often dismissed as trash. And a thousand American studies theses were born.

R is for rabid fans. Trekkies have nothing on the "Xena" faithful, who displayed their loyalty with conventions, fan fiction and Web sites (not to mention letter-writing campaigns urging the producers to let Xena and Gabrielle out of the closet).

S is for swordplay. "Gladiator," Shmadiator! Maximus wouldn't stand a chance against Xena.

T and U are for tragically underappreciated. Six seasons, not one Emmy nomination for Lawless or O'Connor. Go figure.

V is for Valkyries. Xena revisited her past as a Valkyrie this season in a three-part story arc that inserted our heroine into "Der Ring des Nibelungen" -- not exactly what Wagner had in mind, but imagine the demand for ticket sales if Lawless ever hooked up with an opera company and took this act on the road.

W is for whoosh. 1) The sound made by Xena's lethal chakram (aka "round killing thing") as it flies through the air. 2) Whoosh! The Journal of the International Association of Xena Studies.

X is for Xena. She liberated the action genre from the bonds of male tradition. She opened up a big can of whup-ass on gender stereotypes. She was a fighter and a lover and the coolest superdyke since Martina Navratilova. Xena rocked. She rewrote TV history, and now she's part of it.