The flappers Albert Arthur Allen photographed wear bobbed hair, high heels and not much else. 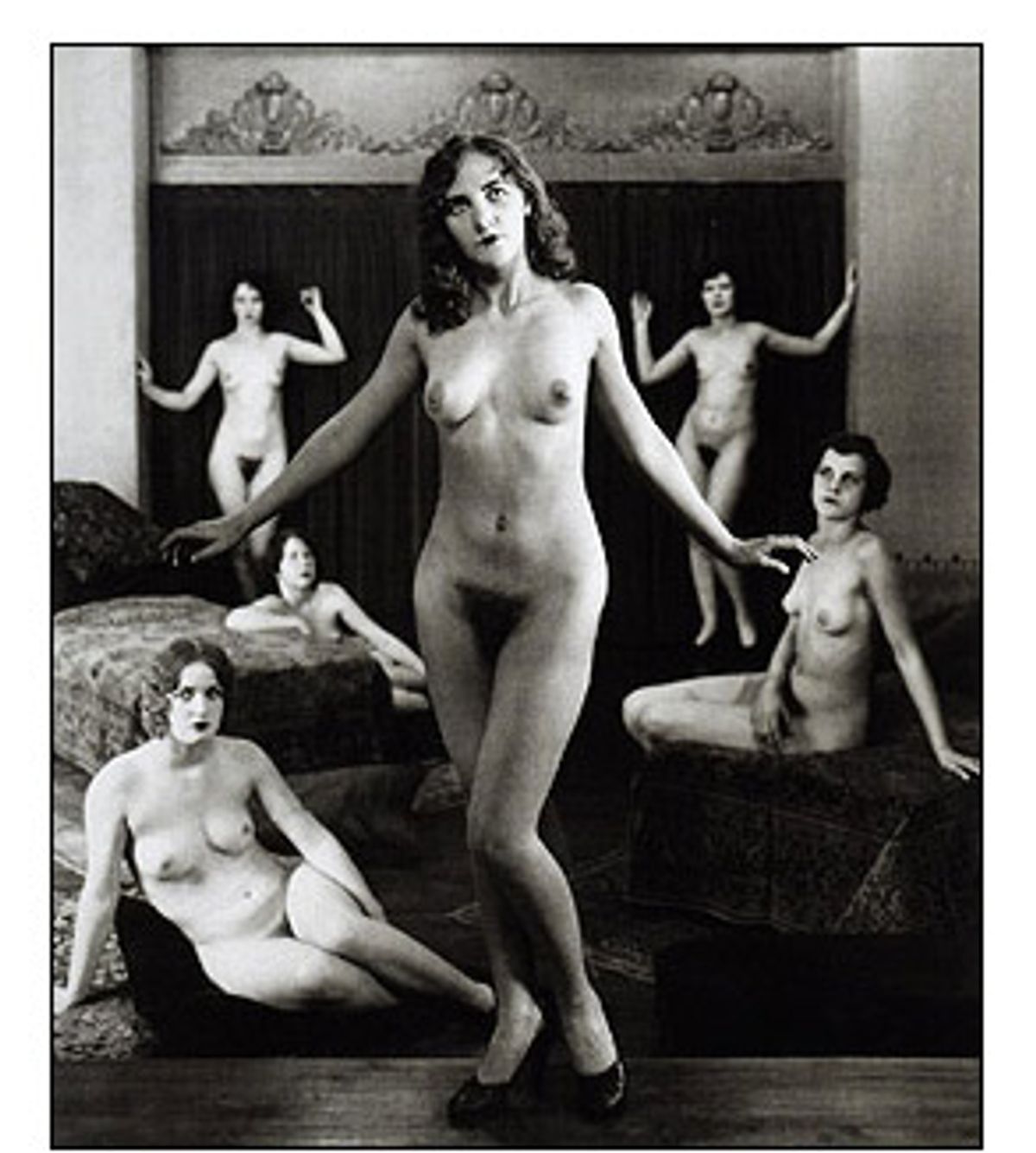 Oh, the young women who roared through the '20s! Flappers frolicked while Bernice bobbed her hair. A new book titled "Premiere Nudes" contains hundreds of photos of these girls, half-dressed and naked.

Nothing makes a woman seem more naked than standing au naturelle wearing an antique hairdo. Almost all of California photographer Albert Arthur Allen's women have bobbed coiffures -- short hair marked with art deco swirls. He was a refugee of a wealthy New England family, as well as the victim of a San Francisco motorcycle accident that left him a hunched-over gimp. That said, from 1915 to 1930, Allen compelled hundreds of California girls to drop their knickers and pose naked. He was not shooting dirty pictures. He believed sex appeal was "human appeal." He also believed "the true nude gives a version of beauty, both physical and spiritual -- two great needs of humanity."

Allen was a seer who thought his photos would inspire a kind of paradoxical chaste lust and reveal the potential of all naked women to become icons. His first series of nudes was of girls posing along the Pacific Coast or among nearby timber. Then Allen put his nude beauties in bourgeois or fake Moorish interiors: a naked dame musing at her piano. Or in her bath. Or inside the confines of her harem tent. Allen's inadvertent masterpiece is a choreographed extravaganza of a dozen dancing naked women, a vision that predates Busby Berkley by a good 10 years.

There is no American photographic oeuvre quite like Allen's. If Susan Sontag had been alive in the 1920s, she no doubt would have designated his work as camp. Eighty years later, Allen's photos transcend their kitsch factor. Once you get past the models' extreme bobs and Betty Boop lipstick kissers, their bodies seem strangely contemporary. These are 2001 proletariat women. Surely if you go into the women's locker room at a local health club, for every Ally McBeal, there are 10 Bridget Joneses -- and these latter would be Allen girls.

I suspect in the 1920s, Allen girls would have been considered slender enough. Not that I have any proof. Nude photography was almost always illegal in the 1920s, so there is not an abundance of photographic evidence. As it was, Allen bore the wrath of San Francisco bluenoses more than once during the '20s and was hauled before a judge because of his photos.

The lengthy introduction to the book establishes how Allen's work fits into the nude aesthetics of the time, although his biography is a trifle dull. Not only are solid facts about Allen hard to come by, his self-penned biographical information is riddled with lies and misinformation. We do know Allen was born on May 8, 1886, near Grafton, Mass. His family was loaded with shipbuilding money -- indeed, Mom and Pop seem to have supported their wayward son for most of the teens and '20s.

When Allen was 21, he moved to California. Nine years later, the self-taught photographer opened the Allen Art Studio in Oakland. During the next few years he burned through $63,000 ($2 million in current money) experimenting with the "scientific obstacles" of photography. He then spent 15 years shooting thematic portfolios of nudes, which he sold to subscribers.

Allen's work was immediately different from that of other photographers of nudes at the time. For one thing, his work depicted the models' pubic hair. Daile Kaplan, author of the foreword to Allen's book, devotes many words to how radical photographing muff was in those Comstock days. Allen himself said he was a "trail finder." And like all trail finders he expected "a certain amount of criticism." He then compared his "humble" photographs to "those of the early martyrs of the Christian church."

"We are in the same position, relatively," he said.

In 1923, this "easy rider" martyr ran his motorcycle into a streetcar, crumpling his right leg. "After numerous medical procedures, his right hip was fused, a condition that meant his left leg was permanently set in a sitting position," Kaplan writes. "Disabled for the rest of his life, Allen walked bent over or on crutches."

In 1924, Allen's martyrdom continued. He was indicted for mailing obscene materials interstate. In 1925, Allen was indicted again for using American Express to send obscene material. This litigation would last for years. Compared to Parisian pornography, Allen's work was obscene only by American hayseed standards. He tried whenever possible to choose models with "red-blooded American good looks." He invented the word "sexin" to describe his two classifications of womanhood -- "virgin" and "mother." For Allen, a virgin was any woman who had not given birth.

In a series called "Sex Appeal," a rather slinky American gal with something on her mind poses in her drop-waist dress by some curtains. Hard to tell if she is a virgin or a mother. In the next shot, she poses in the same setting in her skivvies. Still can't tell. Then the girl stands with her hands behind her back, naked save for a garter belt and black stocking. Whether she is virgin or mother, this gal is definitely an American. No French mademoiselle would wear such a clunky garter belt, antiseptic white and as thick as White Cross bandages.

In a way Allen saw his work as a great democratic project. "To see womankind entirely nude would place all women on equality," he wrote. "And it would be only their true mental and physical charm that would lift them from the ordinary." In 1925, Allen lifted women from the ordinary by putting them into groups and having them perform nude choreography and military drills.

"According to Allen," Kaplan writes, "the tableaus were conceived and directed by him, with models who had 'all undergone several months of hard training, to be able to master certain poses under the correct anatomical posture.'" The "correct" postures include dancing, swanning, swooning and firing invisible bows and arrows. As foolish as these pantomimes may seem now, the women usually look like they're having a ball. ("You want to see what naked women do when they are together? We'll show you what naked women do when they are together.")

Then in one photo, the women march forward, arms outstretched, as a V -- their leader a bored-looking dame with her arms raised high, obviously thinking, "Enough with the goddamn dancing, you gimpy sexist shutterbug."

Instead he did a series of photos based on the late Rudolph Valentino's (1895-1926) film "The Sheik." Allen photographed a middle-aged Valentino impersonator, wearing nothing but an Arab headdress, putting the moves on a naked nymphet who in a moment of phallic switcheroo points a revolver at "the sheik." Kaplan believes this frumpy Valentino was a stand-in for Allen. The fake Valentino begins the tableau as "virile," but by the end "he is reduced to being a ... Christ-like figure" overpowered by a woman -- a member of the gender Allen worked his whole life to glorify.

Allen's next-to-last series is named "Premiere Nudes 1930" -- a group portrait of eight naked girls. Seven of them always sit in the background while a different maid stands naked in the foreground wearing nothing but shoes, including pumps, sling-backs and T-straps. Did Allen have a shoe fetish? No. "The height of the modern heel gives the feminine figure an entirely different alignment and balance," Allen wrote. Allen realized that shoes changed a woman's posture, her "general line of grace."

Allen's final series of pictures, "Exotic Nudes," are anthropological studies of naked women of color. Kaplan notes that the Samoan and Hawaiian nudes wear a morose expression or look away from the photographer. "Was this posture presented at Allen's own insistence, or did it demonstrate their indifference or refusal to confront him? Had Allen outlined his agenda and offended the women?"

All that is known about Allen after 1930 is that in '36 he was a photographer for the Elysium Foundation, a nudist organization. At some point, he had a son named Frederick, and he died unknown in 1962. It should be said that this lack of biographical information is not because records of Allen were destroyed; they are merely difficult to dig up. Allen remains too idiosyncratic a figure for any biographer to score a grant or publisher's advance for 12 months of research.

But even from this incomplete portrait, Allen is fascinating. Did any man -- American or Californian -- love naked women more than Albert Arthur Allen did? Really see them? Looking through his strange, outdated, kitschy and trans-kitschy collection of women standing naked, lying naked, smoking cigarettes naked, looking dramatically contemplative naked, like a cross between Lady Godiva and Zelda Fitzgerald, you have to agree the answer is no. If God is just, Allen is in heaven now with a periscope that allows him to view every American woman -- virgin and mother -- at a moment when she is naked. No man lived his life in pursuit of this vision like Allen did.