Starting at the bottom

My first hostessing jobs in Japan were at seedy strip joints where no self-respecting girl, much less geisha, would go. Second in a continuing series. 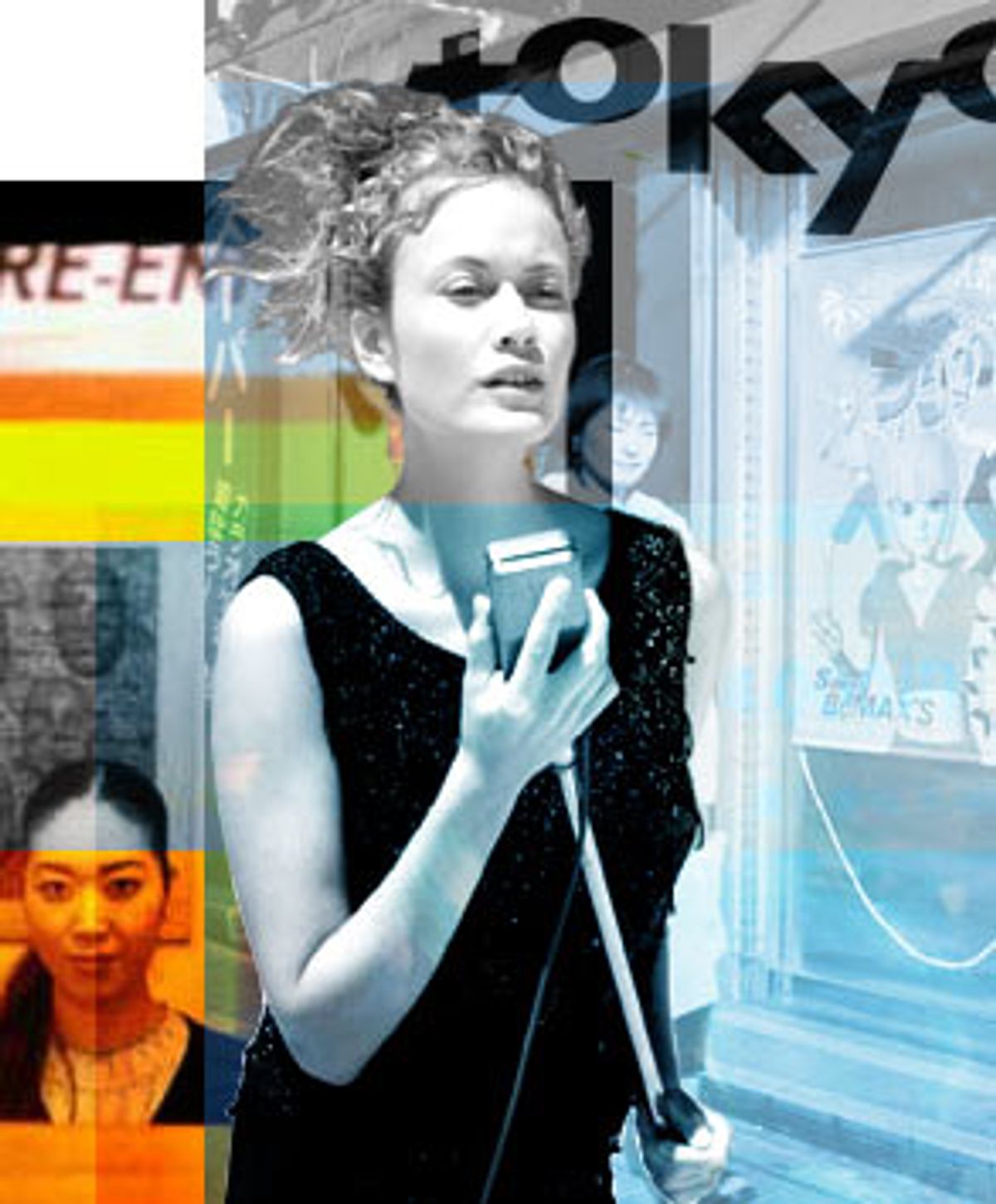 I study Japanese literature in graduate school at Berkeley, and over the past few years I've gone back and forth to Tokyo half a dozen times, either to study the language and the literature or to dance. I hostessed for the first time in the summer of 1999 when I was in Tokyo on a fellowship to study Japanese.

Having just completed my first year at grad school in the high-rent Bay Area, I needed to make some money, and I wanted to improve my spoken Japanese. But even more than that, I was lured into the job by years spent reading literature set in Tokyo's "ukiyo," or floating world -- that neon-lit funhouse of desire inhabited by geisha, politicians, business tycoons, entertainers, thwarted lovers who have decided to commit double suicide (a favorite, idealized topic of Japanese literature) and other would-be romantics. During earlier stints in Japan as an exchange student, I had heard stories from friends about the money to be made and the absurdity to be witnessed in the world of the modern geisha.

Naturally, I thought the job of a hostess strange at first, but gradually I became embroiled in a drama that I created through my various customers and the other girls. The world of the club was both safe and thrilling. It was addictive. The better I became at my job, however, the more I lost touch with myself, and while my sham "loves" with my customers deepened into something like real affection and compassion, the "real" relationship in my life floundered.

I didn't do it solely for the money. I wish I had. I did it for reasons far more dangerous: I needed adoration and approval and I, like so many victims of typically arid American upbringings, was addicted to the rush of adrenaline that love and praise, however insincere and deluded, can bring. After a few months in Japan's floating world, real life was, for a while, too slow for me.

The job varies as much as any other. In the same way that a geisha in Gion, Kyoto, is far more respectable than one who plies her trade at a hot springs resort in the country, hostesses in Japan run the gamut from prostitutes to high-class, hands-off companions. But while the job of a Japanese career hostess of even the highest order is on the whole unenviable -- years of drinking and fondling followed by a very early retirement -- many foreign globetrotters stop in Japan for a few months to gig as a hostess, make some quick cash, and then continue on their way to the beaches of Southeast Asia. Working illegally, they can earn a lot of money and even have fun doing so, getting paid to drink, belt out karaoke songs and be taken to lavish dinners.

Others are in Japan long term to study or pursue some other goal, and have found that hostessing -- particularly in today's difficult economy, which has eliminated many of the previously lucrative English-teaching jobs -- is the best way to make ends meet in one of the world's most expensive cities. It is estimated that there are about 10,000 to 20,000 foreign women (including not just Americans and Europeans but also non-Japanese Asians) working as hostesses in Japan, but an exact figure is impossible to arrive at because most of them are working illegally.

Police raids on hostess clubs -- particularly in the better neighborhoods of Akasaka and Ginza -- are extremely rare, but they nevertheless remain a constant threat. If you get caught working without a visa, you are immediately expelled from Japan and barred from returning to the country for several years.

While I eventually landed a lucrative job in one of the better areas, I didn't start there. What I saw along the way helped me appreciate Akasaka all the more.

I secured my first hostessing job with the help of Jean, a devilishly handsome German "talent scout" -- one of the wolflike foreign men who roam the streets of Roppongi looking for foreign waifs in short dresses. Roppongi is garish and dirty, your one stop for close encounters with foreigners of the sleaziest kind: drunken military men out carousing, drug dealers and pimps.

The scout helped me get a job at One Eyed Jack, whose 70 hostesses, both Japanese women and foreigners, make it Tokyo's largest hostess club. It's a huge place, with a large stage in the middle of the main bar, a VIP room and walls lined with photos of famous visitors from around the world. "Jack's" is not known for subtlety -- its setup is part hostess club, part cabaret, with four nightly shows performed by four foreign dancers. The performances are more Las Vegas showgirl-style ones than strip shows, but by the end of each number the girls are topless, after embodying practically every erotic stereotype in the book -- from harem dancer and hot lesbian to Bond girl and Daisy Duke.

While there is no overlap between the jobs of hostess and show dancer at Jack's, such entertainment obviously affects the club's tone. The stress at Jack's is on pleasure, but only on the surface -- just as the dancers quickly drop their costumes, the hostesses are not positioned to be long-term companions. They are meant to look very good in the dim lighting of the club, but customers will get a closer look only in their imaginations. Not only will the men never get to have sex with these girls, they most likely won't even get to buy them dinner.

The customers get to choose which girls among the dozens of long-stemmed lovelies perched on bar stools they want to drink with, and at Jack's, looks matter most. The hostesses are almost all in their early 20s; most of the foreigners speak little or no Japanese; and the majority could pass for models (at least for foreign models in Japan, who are a second-rate lot). And no one gets the "Twin Peaks" reference.

Jack's is the opposite of an intimate Akasaka or Ginza hostess club. There's no mama-san to direct the choreography of hostess and customer or to make things cozy. There are dozens of waiters, who are continually getting fired and rehired for ignoring the prohibition against talking to the hostesses. (The customers would regard these handsome young men as unfair competition.) On Friday nights it's utter chaos -- the hostesses, slammed up against the bar as they chat with their customers, occasionally have their asses grabbed by other men who are en route to the restroom.

The customers generally belong to glitzy professions -- they're TV producers, magazine publishers, plastic surgeons who offer to give the hostesses special deals on breast implants. One night I was seated in the VIP room with the head of the Japanese Martial Arts Federation, and he demonstrated his "faster than the human eye" moves as he ogled the hostesses.

Foreign guests tend to seize their chance to revel in a realm where they don't have to pretend that they think the sexes are equal. The customers at Jack's occasionally want to practice English or talk about lost loves, but most of them are just warming up for a night on the town. Across the hall from One Eyed Jack is Private Eyes, a strip club featuring foreign and Japanese dancers. The strippers share the bathroom with Jack's hostesses, and except for a slightly lower ratio of fabric per body part with the former, you can't really tell who works where.

At Jack's there is no pretense of developing a relationship with a patron. Often a customer would start to ask me about meeting outside of work (for some kind of date, though they rarely mentioned sex explicitly) after the first hour of drinking and conversation. I'd reject him, both of us would go back to watching the dance show and I'd never see him again. The atmosphere was too much like a bachelor party for me so I quit after two weeks.

Most of the clubs in Shinjuku's Kabukicho -- Tokyo's red-light district, located conveniently next to one of its major financial districts -- sell explicit sex, though there are a few more sedate hostess bars. Even these, however, are largely staffed by Japanese hostesses, who are, on the whole, pushed closer toward prostitution than their Western counterparts, mostly because the career hostess has little else to trade on.

The foreigners who work in Kabukicho are usually non-Japanese Asians or Eastern Europeans on contracts that allow them to work legally in Japan for a few months on special entertainment visas, but that severely limit their salaries. (Their pay is determined beforehand, and is far less than that of other foreign hostesses.)

After Jack's, I next tried working in Kabukicho simply because it was, of the four entertainment districts, the closest to where I was living with my boyfriend of the time. I assumed that it couldn't be as bad as the rumors that plagued it, and I was sick of paying a fifth of each night's salary on the taxi home.

My first night at one of Kabukicho's clubs, Harlem Night, was amusing, particularly what I saw on the way to work: establishments like Soapland, where customers pay for an hour and a half of suds and sex, and shops selling specialty items like pubic hair wigs. I hoped for the best.

Harlem Night was certainly rowdier per capita than Jack's: There were only about a dozen hostesses, but the Japanese girls, like good modern geisha, knew an endless number of (very loud) drinking games. The hostesses weren't as pretty and the customers not as well tailored as their Roppongi counterparts, but they all seemed to enjoy themselves.

A Filipina hostess with a showstopping singing voice explained the benefits of Shinjuku to me: "The good thing about this place is that it's easy to get customers. In Ginza and Akasaka, and even Roppongi, it's very expensive, so it's hard for a new girl to get clients. Here, because it's cheaper, you can get a bunch of customers quickly. And you're blond -- you'll have no trouble!" She smiled, trying to encourage me. I wasn't feeling very enthusiastic. I had in my head the image of a more demure and more glamorous variety of hostessing.

By the second night, I was put off by the dingy atmosphere, the waitresses dressed like Playboy bunnies and the fact that the hostesses had to hand out fliers on the street to draw in new customers. This was highly dangerous for an illegal worker like me and extremely humiliating, as I stood out in the street and tried to smile. Sam, the Kenyan bouncer who stood outside with us, serving as both protection and comic relief, tried to make light of it. "You get used to it. It's not so bad."

A passing man would occasionally follow me inside, and not waste much time before starting to bleat and moan about how lonely he'd be if I didn't leave with him after work. From this I gathered that in Shinjuku the women agree to this more often -- usually because they are desperate.

"I only do this because I have to," one Rumanian co-worker said to me with a shrug. She was wearing the same dress she'd had on the night before and she admitted that this was her only nice piece of clothing. "I need the money."

But I didn't need it that badly. I quit and left that night, alone.

Part 3: Men and mamas -- my introduction to a floating world.