In pursuit of the mega Mickey Mouse rave, a handful of candy ravers aim to make the Happiest Place on Earth just a little bit happier. 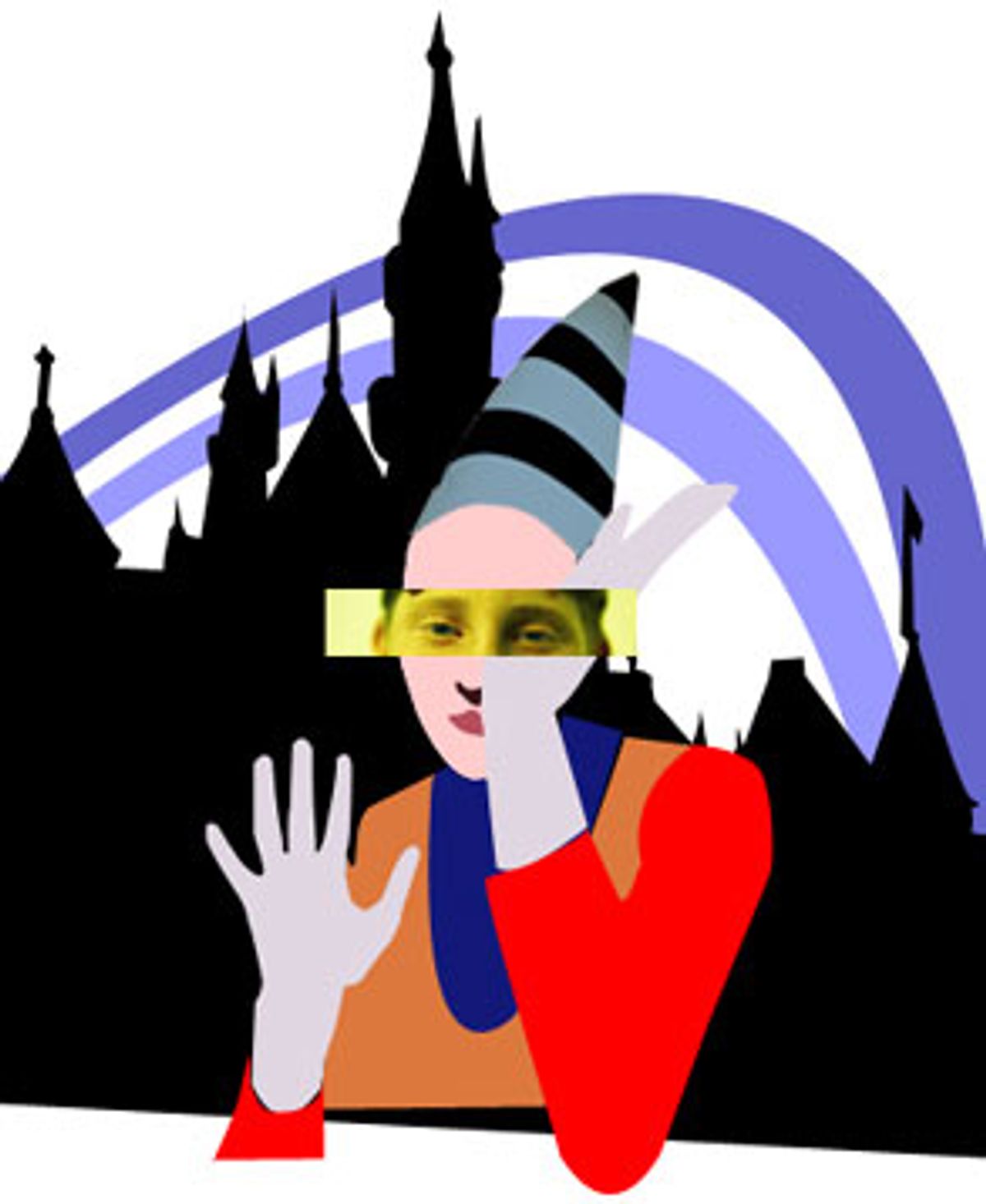 It's 1 p.m. Saturday at the Carnation Plaza Gardens in the center of Disneyland. The Vineyard Junior High Eighth Grade Chorus of Alta Loma, Calif., has just finished belting out a rousing set of elementary school standards. Meanwhile, three young candy ravers -- dance music fans dressed in tent-sized pants and draped with enough plastic bracelets, necklaces and other primary-colored juvenilia to decorate a romper room -- slump on benches in front of Sleeping Beauty Castle.

1 p.m. is the second meet-up time for the unsponsored, unendorsed, unofficial raver day that's supposed to happen at Disneyland. A raver day is a grass-roots, street-level happening where ravers agree to converge at a real-world event (as opposed to a rave or party) at a pre-arranged place and time. Together, they hook up with old friends, meet new ones and spread their well-worn message of peace, love, unity and respect -- PLUR. The logistics are worked out in advance via the Web, e-mail and message boards on sites such as www.raverlinks.com and www.candykids.net. Today's event was even promoted by its own Web site, thrown up by CWCC, a crew of SoCal rave promoters.

The specific aim of today's raver day as explained on the CWCC site is to secure a permit from Disney to hold a rave in the Carnation Plaza Gardens in December and fill it with the bouncing sound of happy hardcore, an extremely fast, raw subgenre of electronic music popular among candy ravers.

"They have cheerleading competitions here," says Pacey, 19, an optimistic lad clad in Kikwear pants so large that they enshroud his shoes and ooze out onto the blacktop like a denim waterfall. He adjusts his Adidas visor and slaps his headphones over what look like exceptionally painful piercings in his central ear cartilage. "If cheerleaders can get a permit to dance, then we can get one."

CWCC's efforts represent an interesting viral approach to promoting a positive raver presence at Disneyland. Ravers have converged for raver days here for more than two years in hopes of making the elusive Disney rave happen, usually prompting a turnout in the hundreds. But as Pacey -- a name that he has assumed to accompany his raver identity -- and the other two PLUR-ophiles are keenly aware, there's one big problem: No one is showing up today, not even Mike, CWCC's mysterious point man, whom I swapped e-mails with a few times earlier in the week.

While past Disneyland raver days have drawn throngs of glow stick-wielding warriors and featured tape trading, sticker giveaways, spontaneous acts of PLUR and boombox-aided dancing throughout the park, these three kids are the only ravers representing today, and the sun seems to have bleached away most of their enthusiasm.

"This sucks," says Michelle Applebee, 17, a raver from northern San Diego County who is part of the CWCC crew, her eyes hidden beneath her baby blue visor. "It sucks a lot."

"Where's Mike?" asks Pacey, eliciting another round of shrugs and grunts.

Like everyone else on this relentlessly cheery, tar-melting Southern California summer day, he's somewhere else -- at the beach maybe, or perhaps chilling in an air-conditioned room in a suburban Orange County home rocking Proskater 2 on the Playstation and waiting for night to fall. Or maybe he's just somewhere else in the park. No one knows.

All these three kids want to do is make the Happiest Place on Earth a little bit happier by adding a better soundtrack, but today it doesn't look like things are going to work out.

Why they even want to do this in the first place is a question that's a bit more difficult to understand.

Dancing and drugs go together like peanut butter sandwiches and chocolate milk. And therefore raves are notorious loci of party drugs, especially ecstasy, ketamine and GHB. Part of the reason legal or outlaw desert massives and parties in abandoned warehouses are staples in the rave scene is because they are places where kids can do drugs and more or less be free from police or parental intervention.

Which would make you think that Disneyland, with its massive security force, hyper-brand consciousness and emphasis on a hazard-free, family-safe environment would be the last place in the world these kids would want to party. But unlike the security teams at most raves, Disney doesn't rifle through your wallet and backpack at the gate, nor does it frisk you at the door. While it would obviously be illegal to do so, it wouldn't be difficult to smuggle whatever drugs you wanted through the gates of Mickey.

And dealing with the Disney security and the Foucaultian surveillance seems to be a non-issue to these kids. "I don't care about the security," Pacey says. "For me, it's all about the music. I just want to dance."

To try to jump-start the day, Pacey and his pals make a barrage of cellphone calls to other ravers who are supposed to be representing. Pages are left. Voice mails are exchanged. The three ravers pass more time sweating and sitting on the benches. Eventually, five more kids show up, including Cheech and Ewok, two 21-year-old homeless ravers, and Perry, also 21, a self-described anarchist.

None of the four distinct cliques of kids in the group really know each other; they've never partied together. Before today, they might have exchanged e-mails, but they've never spoken. Still, they drove in from all over San Diego and Orange counties to hang with other candy kids and revel in the feeling of community and the bond that the scene gives them.

Waiting some more with a slightly larger group

Sitting around in the middle of a hot, sunny day in a stunningly sober state, the kids seem shy. They goof around but they seem to have little to say to each other in their drug-free state. More calls are made in an attempt to score some E or acid. Or something, anything, to liven up the joint. They swap "candy" (slang for the gaudy kiddie necklaces and bracelets of shiny Day-Glo beads and alphabet letters) from wrist-to-wrist, neck-to-neck. Eventually, they decide to hit some rides while they wait for drugs or more people or both to show up.

As the little crew bounces from the Sleeping Beauty Castle to Tomorrowland to Toontown, the most striking thing about the pack of candy kids is how little they stand out in the crowd and how closely they mirror the carnivalesque Disney aesthetic. They came to the park with the mission of demonstrating that they are good citizens worthy of holding an event in the park, but a look around at the regalia of the other patrons reveals that culture might have already achieved their mission of acceptance.

Children with their parents scamper about in beaded necklaces and bracelets, wearing the same visors, skate shoes and ultra-baggy baggy pants as the raver kids. Like the rave scene and its music, which has become almost as hyper-commercialized, commodified and safe as, say, Phish and the jam band scene, the raver aesthetic has gone overground.

Maybe if the ravers were here en masse their presence would be more conspicuous, but rolling around in a small group of eight, they blend in almost seamlessly with the rest of the families in the park, most of whom sport surreal Disney gear, including three-fingered giant Mickey Mouse gloves (a staple, coincidentally enough, at raves), fuzzy pink Mouseketeer ears and glow-in-the-dark necklaces and laser-light spinners that could easily be mistaken as the photon lights ravers use to give one another light shows when they're on E.

Indeed, Cheech, smiling ear-to-ear as he clutches a giant stuffed Tigger given to him as a gift by Ewok, looks exactly like thousands of other Mouse-struck tourists who make up the cartoonish sea of bodies circumambulating throughout the park.

In academic literature, if not among this little crowd, Disney is variously vilified and praised as being at the forefront of the kind of pastiche, cut-and-paste, banal aesthetic of relentless mediation, de-historicized cultural sampling and miniaturization that has come to be the dominant mode of American popular culture, including rave culture. For all their utopian ideals, somehow the ravers miss the irony.

By the time the ravers have taken a plunge down the Splash Mountain log flume ride, looped through Frontierland and made a pit stop in Toontown, it's time for the 7 p.m. meet-up.

Four more candy kids are waiting in front of the castle. The drugs have not arrived and might not ever. The ravers decamp to a smoking area and wait some more. There is talk of heading to the Masterdome, a popular rave venue in San Bernardino, to see some happy hardcore DJs spin.

A few hours later, night falls and the kids have yet to move on to the Masterdome. So they wait some more in the center of the Happiest Place on Earth. For ecstasy. For acid. For more people. For a rave permit. For something that will take them all away.