I thought I was washed up -- until Shelly called. 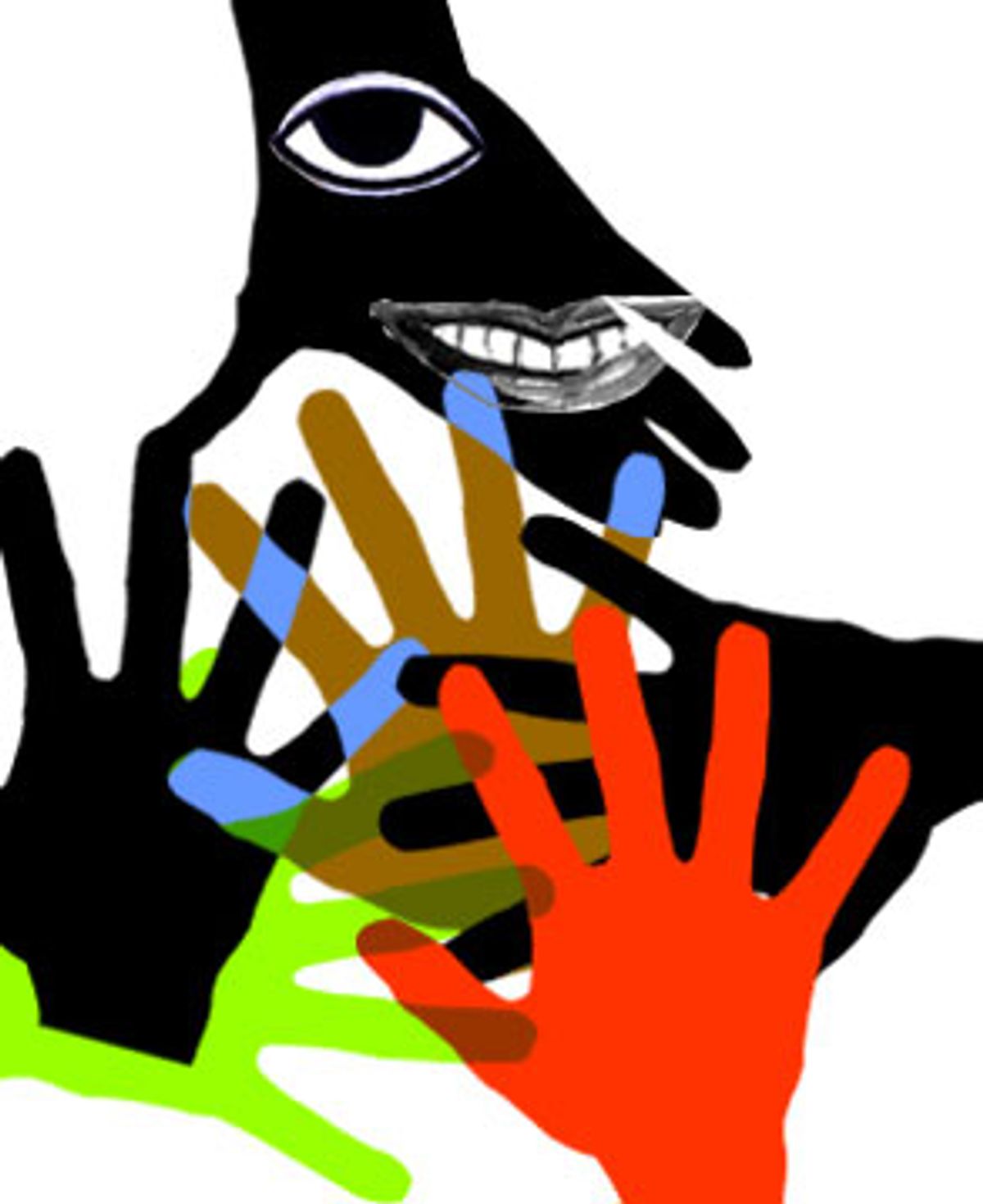 For five years in the mid-'90s, I had the dubious honor of being one of Los Angeles' hottest male hand models. I could barely pick up a magazine without seeing my hands gripping an ATM card, gesturing toward an Apple computer, cupping a globe or signing a bank document. I was at the top of my game and making money, literally, hand over fist.

Among my hands' greatest triumphs was a poster for the Michael Keaton-Nicole Kidman bomb, "My Life." My hands appeared 50 times their actual size on a billboard looming over Santa Monica Boulevard, where the 405 freeway meets Sepulveda. My palms reached out lovingly to touch a baby's fingers.

I never saw the movie, but it is apparently about a dying father's struggle to leave behind a videotape for his yet-unborn son. In a case of art imitating life, my hand modeling career had died prematurely, like the father. Since I had no idea why my hands became so popular, I couldn't put my finger on why they became unpopular. I hadn't done a hand job in over a year when my hand modeling agent phoned last month, and I was sure she was going to fire me.

"Hello, Serling," she said. She also represented my feet. With any luck, she'd lined up a job for my toes.

"How have you been?"

"Great," I lied, stifling a sneeze. Yesterday, my theatrical and commercial agents both dumped me. I immediately came down with the flu, and was still dragging around in my rumpled pajamas at 4 p.m. Shredded tissues sprinkled the floor like a light snowfall. I couldn't take any more bad news.

"Can you work a hand job tomorrow?" she asked.

"Sure!" I choked back tears of excitement and joy.

"Your hands are in great shape, I assume," she said flatly, less a question than an edict.

"Never better," I bubbled. "I was just doing my finger aerobics when you called." I kicked my index fingers in the air, like dancing Rockettes.

While jotting down the job information, I gasped at the condition of my hands. Because of the recent stress, I'd been biting the hands that fed me: My fingernails resembled jagged rows on a dulled saw.

I rushed over to the Great Nails salon on Ventura for a manicure and spent the rest of the evening guarding my nails like rare jewels. Cutting a tomato was a potential act of treason. The prospect of slamming my hand in a car door loomed large, not to mention the peril of a leaky pen.

The next morning, I drove through the drizzle to the photographer's studio in the hills of Encino, the car heater blasting to ward off my lingering flu. My hands were so moisturized I could barely grip the wheel.

Yet I felt confident, even cocky. My hands were ready for their big comeback. After all, these were the dazzling digits that had portrayed the hands of God in a Honda commercial. They belonged in front of the camera. They had "It."

My car pulled into the long driveway of a sprawling mansion. An elderly, stooped gentleman guided me upstairs. The studio was a '60s nightmare with cottage cheese ceilings and boxy walls. The psychedelic black-and-white tile floor made the room look like it was tilting. The new "Shaft" soundtrack buzzed from above. The photographer, Mike, and the art director, Susan, had assembled a small credit card machine on a table covered in a white tablecloth.

"We'll be shooting on video and you'll be pointing at the Linkpoint 3000 credit card machine," Mike told me.

"I can't wait to see your fingers make this machine look sexy," Susan told me. Her New York accent made normal sentences sound like vicious threats.

"My charismatic fingers are going to blow you away."

"They'd better. The guy we used yesterday didn't work out. That's why we're reshooting with you today."

I got chills, and began to sniffle. Shelly hadn't mentioned anything about another guy. If they'd fired one hand model, they could easily fire another. Even when my hands had been in great shape, I feared being exposed as a fraud. Hand modeling, as a job skill, seemed to rank right up there with coughing and sneezing.

"No. The house belongs to a friend of mine. You're old enough," he said, looking me up and down. "You know the Fifth Dimension?"

"Sure." I smiled, sensing the creases bunching up around my eyes.

"The guy who owns the house is Lamont from the Fifth Dimension."

I didn't know there was a Lamont from the Fifth Dimension. Almost on cue, Lamont leaned into the doorway. He was the guy who had escorted me in.

I couldn't let a Fifth Dimension fetch me drinks. Growing up, I'd idolized the Fifth Dimension. "Up, Up and Away," "Aquarius," "One Less Bell to Answer," "Wedding Bell Blues" ...

"Apple juice would be fine," I offered, "and a tissue, please."

He nodded and shuffled off. How sad was that? A former musical icon reduced to renting out his studio for hand shoots and offering maid service in his own home? I could relate to Lamont and his has-been status. It made me doubt myself. Maybe my hands had lost their touch. Was it all downhill from here? One less egg to fry?

"We are making an instructional CD for new operators of the Linkpoint 3000," Susan told me, picking specks of lint off my cuffs. On camera, they would look like dandruff. No one would buy the Linkpoint 3000 from a lice-ridden slob.

"We have a voice-over narration that your hands will be responding to. I'll be reading the narration for now. Just follow along," she said, sinking into a director's chair beside Mike's camera.

I hovered behind the credit card swiper, next to a large blowing fan.

My hands flailed around. For the life of me, I couldn't synchronize my hands with Susan's raspy voice. In desperation, my hands began fondling the machine, as if trying to arouse it.

"OK, let's try it again," Susan said, smoke rising from her fire-engine red hair. "You should be standing there like you're talking to someone about the machine. The machine can't speak. Your hands are the only things bringing the machine to life."

This time, my hands frantically fanned the machine as if it were on fire.

Cut. My chest was tight, my heart pounding. The wind rushed at me. Action.

I felt a sneeze coming on. My hands were torn between the Linkpoint printer and the need to find a tissue. I grabbed onto the machine like a buoy on a storm-tossed ocean. Then I yanked open the lid of the printer, ripped out some printer paper and blew my nose into it.

Cut. Action. This next take, my hands had a life of their own, swaying from side to side, conducting an invisible orchestra.

"Do less," Susan said. "Too much Vanna White. They're starting to look like clown hands."

They felt more like mime hands that no longer belonged to my body.

Cut. Reslate. Action. Over and over.

Take 15. Caterpillarlike, my fingers inched around the machine and tipped it over. The table wouldn't stop shaking.

"Could you try not to make the machine move?" Mike asked. "It's starting to look like 'The Blair Witch Project.'"

Take 16. Susan said hello and my hands practically waved at the camera. Cut.

Mike shut down his camera and pulled Susan aside. They began conspiring in a far corner of the room.

I saw the handwriting on the wall. My hand modeling career was about to come to a catastrophic end. I seized the fan and faced it away from me, so that it blew on Lamont's collection of black pornography.

Just then, Lamont resurfaced, balancing my juice glass on a tray. Pitiful.

"Mike tells me you're one of the original Fifth Dimensions," I said, and took a sip.

"Yup." His green eyes sparkled beneath a baseball cap of crushed gray curls. "Just got off the road yesterday. We tour all the time."

I was stunned. Lamont wasn't just doing well; he was thriving. "Sorry I was late with your juice," he said, waving a Kleenex into my hand. "I was busy scheduling a concert for the group at the White House."

I gulped down the juice and dabbed my nose. My mood suddenly shifted. If Lamont could rebound, so could I. Now, it was just me and the Linkpoint 3000, as if we were the only two things left in the world. The scorching hot lights blinded me from the others. All was serene. I felt umbilically tied to the Linkpoint 3000. It was the kind of bonding that had lured me into performing in the first place -- allowing me to reach a Zen-like symbiosis, a complete blurring of all boundaries.

"Let's try this one last time," Susan warned me as Mike hunched behind his camera.

Locked in the privacy of the moment with the Linkpoint 3000, my hands instinctively swept above its contours, pushing all the right buttons with masculine grace. I was inside the Linkpoint 3000; it was inside me. All my worries evaporated along with my sinus congestion.

Cut. Print! They cheered, heaving collective sighs of relief. My creative juices were flowing again. I nailed the next four segments in one take.

For the final sequence, I guided the machine's plug effortlessly into a fake wall socket. Mike and Susan leapt to their feet, giving me a standing ovation. I could barely contain my joy. My thumbs linked together and my fingers flapped by their side, like a bird freed from its cage, its wings swooping and diving through the air unfettered, as if nothing could hold it back ever again.

David Stein is a writer and sometime model in Los Angeles.