What happens when a television network tries to entertain an arena full of basketball fans with platinum pop groups? The fans bite back. 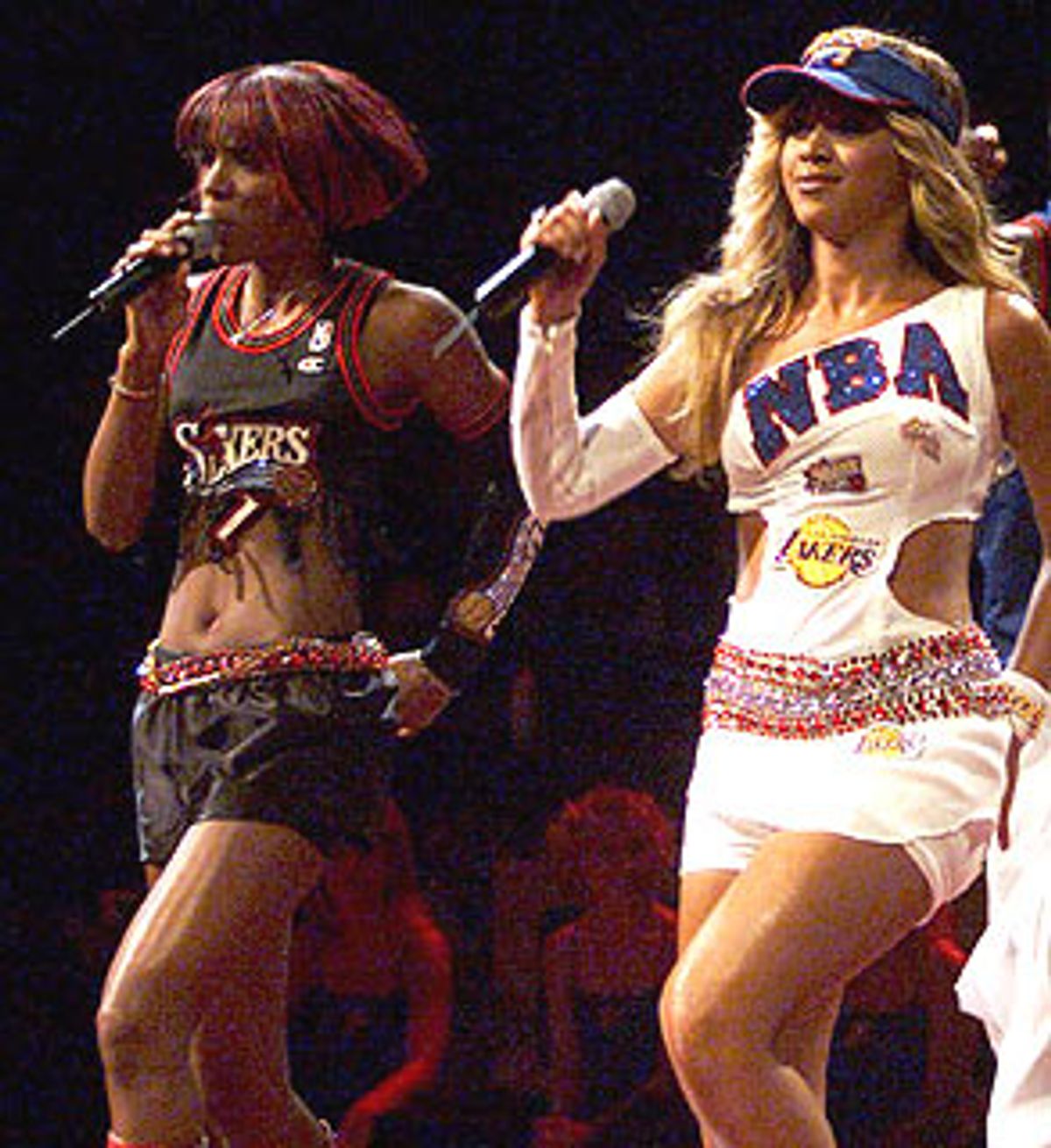 Years from now, when the just-completed 2001 NBA Finals are remembered, it might be for the Los Angeles Lakers' Shermanesque march through the playoffs, their best-ever 15-1 record during the run and their efficient disposal of the Philadelphia 76ers.

But culturally, from a pop entertainment point of view (and really, isn't that the only one that really matters today?), the series will be forever earmarked as the one when the boo birds came out during halftime of Game 4 and heckled Destiny's Child right off Philadelphia's half court.

The three members of the R&B girl group appeared to perform two singles, "Survivor" and "Bootylicious," nationally for NBC -- only to be met by a chorus of catcalls the moment the last beat rang through the arena.

And what a wonderfully unexpected spectacle it was. Not that the girls necessarily deserved the disrespect. Their shimmying performance of "Survivor" and "Bootylicious" was utterly competent by today's pop standards. And they didn't tread on any cherished institutions, the way Roseanne Barr did a few years ago when she got rightfully booed for screeching her way through the national anthem at a major league baseball game.

Instead, the boos last week were more likely directed at NBA and NBC marketing executives who, battling a playoffs ratings free-fall since Michael Jordan's exit, have been grasping at ways to keep non-sports fans tuned in. The solution? Turn it into entertainment, of course. (If it works for TV news, why not sports?)

Together, the league and the network opted to scrap halftime analysis and interviews and instead lined up a different nonbasketball halftime for each championship game. That included U2 performing via satellite, wretched special additions of NBC's prime-time game show "Weakest Link" starring NBC sports announcers and NBA players, and performances by Destiny's Child and pop group Sugar Ray.

Last year the NBA and NBC had a different entertainment answer: to force league coaches to wear mikes so viewers could get a more intimate feel for the game. Phoenix Suns coach Paul Westphal, citing obvious reasons like the other team listening in on his strategy sessions, balked and was fined $100,000.

This year it was concerts. "I'm comfortable in trading [halftime] analysis for the quality programming of U2," NBC's David Neal told USA Today.

Of course, remember it was NBC Sports that spent last winter trying to make chicken salad out of Vince McMahon's XFL.

What's odd is that of the major sports, basketball already drips in crossover entertainment appeal. All three stars of the Finals -- Kobe Bryant, Shaquille O'Neal and Allen Iverson -- have recorded rap CDs. And then there's the wave of new eye-popping Nike commercials, sort of "Stomp"-meets-Rucker Park, the legendary Harlem Hoops haven. In the clips, real players turn their playground fakes, dribbles and passes into dance moves set to a pulsating soundtrack of sneaker pivots and bouncing b-balls.

Yet instead of building on those natural synergies, the NBA and NBC opted to cram entertainment down viewers' throats.

For Destiny's Child, their only crime was being the first of the special halftime entertainers to perform live in front of a hoops crowd. Plus, they did it in Philly, where, urban legend has it, restless locals have been known to boo parades and Santa Claus. Throw in the fact that the 76ers were losing badly at the time and that Michelle Williams, one of Destiny's Children, was wearing a Lakers jersey (fellow singer Kelly Rowland wore 76ers colors, though, and lead vocalist Beyonci Knowles wore a top that read "NBA"), and it all added up to a roar of boos.

Yet there was something refreshing and unusually authentic about the debacle. At a time when prime-time pop culture is so programmed, when everyone is supposedly in complete agreement that this is how mainstream entertainment synergy works today -- you will enjoy, you will play along, you will help us sell records, you will be extras in our music marketing camping, you will blindly follow as we try to save our television ratings -- Sixers fans, who'd been waiting for nearly two decades for their team to reach the finals, had an answer: "Like hell. Do it on your own time; our team is here to play ball."

Saturday night's Game 5 was also played in Philly, and before Sugar Ray's halftime performance Sixers team owner Pat Croce personally introduced the band and stressed how he'd invited them to perform and to please make them feel welcome (i.e., "I'm begging you not to boo"). The band then warbled through its new single, "When It's Over." The crowd reaction? They played nice. No boos, just indifference.

Did the halftime entertainment ploy work? The NBA and NBC are crowing that ratings for the just-completed Finals were the highest since Jordan's grand exit in '98, which is nifty spin. In reality, the '98 Finals racked up bonanza ratings of 18.7. The 2001 Finals came in at a respectable 14.8. And yes, they were up over last year's 2000 Finals, but how could they not be? Viewership last year was the lowest in two decades, back to before the Finals even aired on prime time.

Meanwhile, there's proof the halftime specials did little to hold on to viewers. For instance, more fans tuned out during Game 1's U2 mini-concert than tuned out during the traditional halftime from last year's Game 1.

Could it be ratings for the NBA on NBC were up because sports fans got what they wanted -- some great hoops?

Don't tell NBC. It's probably busy lining up the cast of "Saturday Night Live" for next year's halftime shows.