The best season ever?

Barry Bonds is on his way, if you look at the stat -- and it isn't home runs -- that measures offensive performance most accurately. 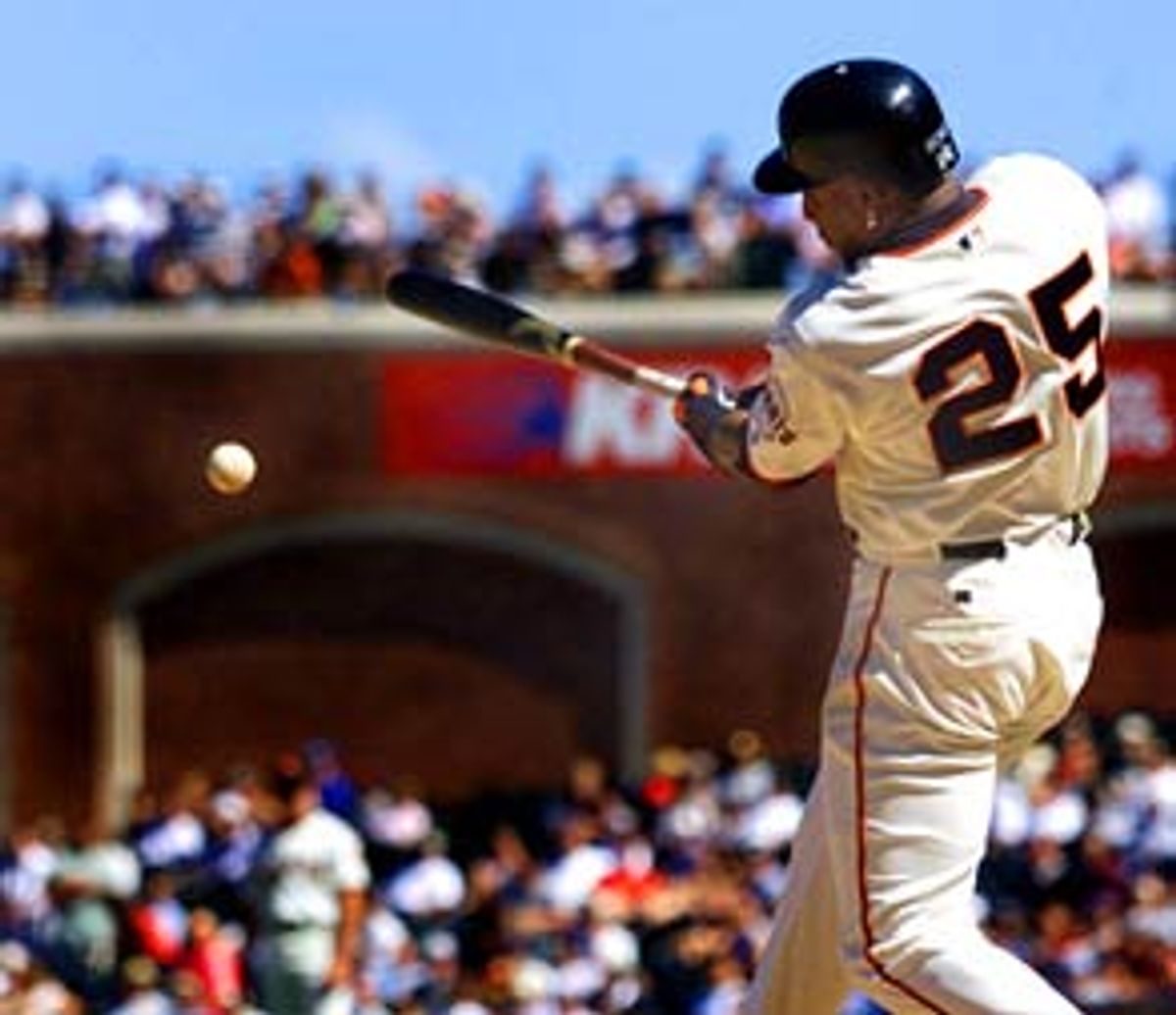 Is Barry Bonds about to have the greatest season in baseball history? I don't know, but I can tell you with some degree of accuracy that the San Francisco Giants slugger is so far having the greatest season in 80 years, and it's neck and neck with the best season ever. Let's look at the superficial numbers: As of Monday, Bonds was hitting .320 with 36 home runs, 64 runs batted in and 55 runs scored. That's pretty good, particularly the home run total, which, as you probably know, is on pace to surpass Mark McGwire's 1998 record of 70. About the rest, you may ask, what's the fuss about? Going into Tuesday's games, there were 15 hitters with higher batting averages, two with more RBIs -- Colorado's Todd Helton led him by 15 -- and four with more runs scored. A very good season, you might say at first glance, but the greatest ever? It really doesn't even look like the best season this season.

Let's dig a little deeper. In the early '70s, just getting into the history and numbers of the game, I worked with an economics professor and baseball analyst named George Ignatin, with whom I later wrote a column for the Village Voice and with whom I did two books for Prentice Hall. In preparing a study on the Ultimate Hitting Statistic -- we sort of knew that there really was no such thing, but we wanted to come up with the closest possible approximation -- we looked for the numbers that correlated best with winning over baseball's previous six decades.

The answer was fairly simple. Home runs, of course, are always nice to have but leave too much else out of the equation. Batting average is a good indicator of consistency but doesn't give you an idea of how far the ball was hit, as in single, double, home run, etc. RBIs and runs scored are, of course, important, but too dependent on where a hitter bats and who bats behind him in the lineup.

But on-base average, which measures your proficiency for reaching base, and slugging average, which measures your ability to hit the ball a long way, are the two best stats. George felt that one stat had an effect on the other that couldn't be seen by mere addition. For instance, a double puts a runner on second base, as does a walk and a stolen base, but the former is better as it sweeps the bases clear in front of the hitter.

Anyway, the resulting statistic was called "SLOB" -- Slugging times On Base -- and we found it to be the quickest and simplest way of measuring the overall effectiveness of a hitter. Others did, too. At around the same time a researcher from Philadelphia named Richard Cramer devised an identical formula that he labeled Batter Run Average. I don't know who came up with it first, but I'm happy to credit both Ignatin and Cramer, who were working independently. The point is that whether you call it SLOB or BRA, the stat covers, well, all the bases when it comes to hitting (except stolen bases, though both Cramer and Ignatin agree that stolen bases are both relatively unimportant when it comes to scoring).

Stated simply, the formula works like this: If Barry Bonds' slugging average happened to be a perfectly phenomenal .911, as it was on Tuesday morning, and his on-base average was .485, also as it was on Tuesday morning, you multiply those figures together to get his SLOB, which would be a ridiculous .4418 -- ridiculous because that mark is unsurpassed by any player except Babe Ruth's ever-so-slightly better .4506 in 1920.

But more on that in a moment. Roughly speaking, Bonds' .4418 means that he has "created" .4418 runs per at-bats, or, if you like, 44.18 runs per 100 at-bats. (SLOB, by the way, does a remarkable job of calculating actual team runs, and is slightly less accurate when it comes to individuals, because luck and injuries to hitters in front and in back of a given hitter can unfairly affect run production. With the team's numbers, it pretty much evens out.)

Now for the really big boys. Ted Williams, generally regarded as either the greatest hitter in baseball history or the greatest besides Babe Ruth, topped out with an amazing .4049 in 1941. Babe Ruth, in what many regard as his best season, was .4331 in 1921 -- below where Barry Bonds is right now. The year before, Ruth had an even better SLOB of .4506 (but then, Babe was a bigger slob when he was younger), the only SLOB better than Bonds' current mark, and just barely better at that.

Can Barry Bonds continue on this pace? Not a chance. (I think.) Meanwhile, the only thing preventing the public from appreciating the most amazing batting performance in eight decades is an improper understanding of baseball statistics.