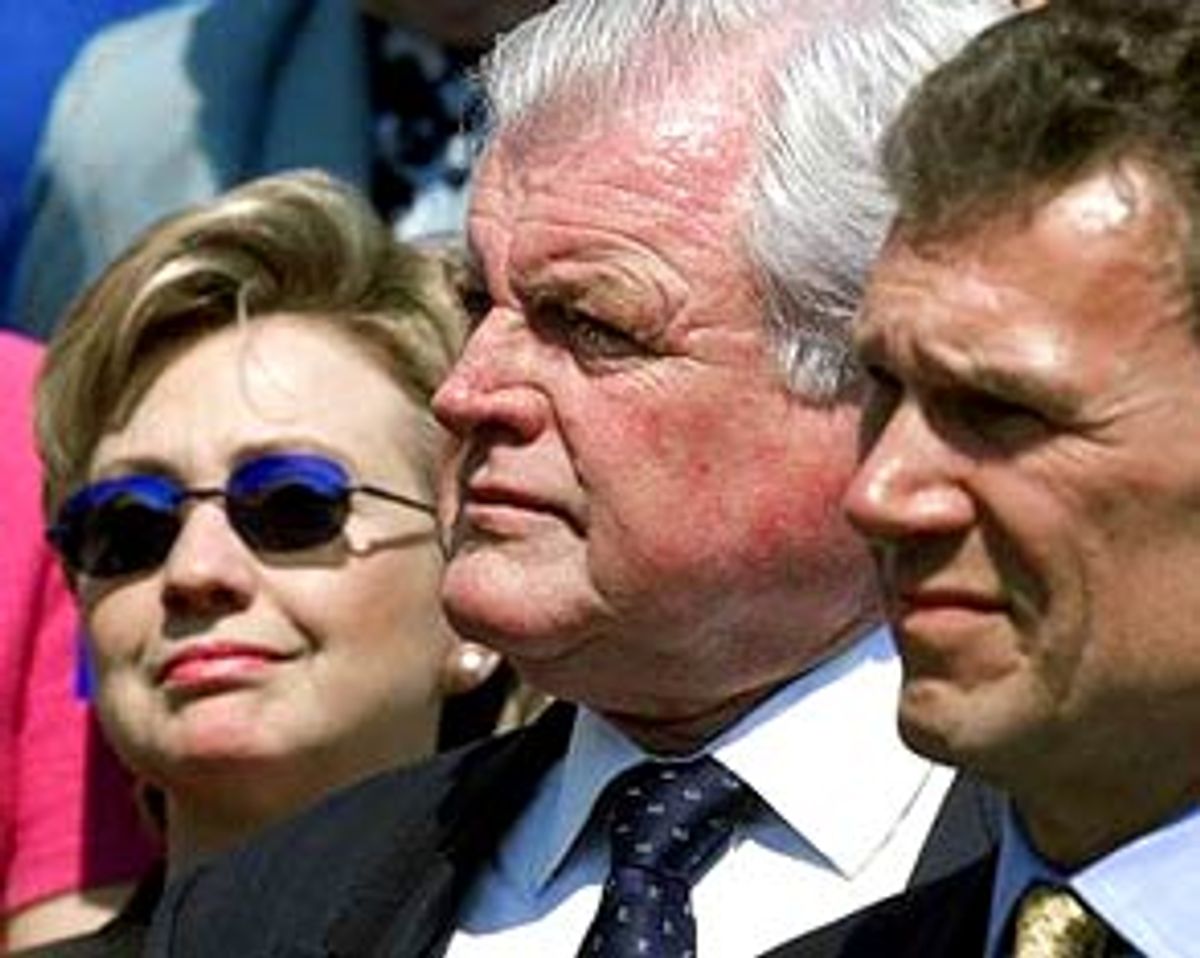 In blinding sunlight on the white stone steps of the Capitol Tuesday morning, members of Congress jostled one another to get close to a sexy thing. This being Washington, that sexy thing was the patients bill of rights, the controversial legislation that will allow patients to sue HMOs and insurance companies for denied claims that result in health woes or death.

Politically, the patients bill of rights is where the action is for the immediate future, a crucial test of whether the Senate's new Democratic leadership can advance its agenda, and how effectively the Bush White House will fight back. Witness, for example, the hot behind-the-scenes debate over the role Rep. Greg Ganske, R-Iowa, would play at the press conference.

Ganske, a plastic surgeon, is the primary Republican sponsor of the patients bill of rights in the House. But he's also a declared opponent of potentially vulnerable Sen. Tom Harkin, D-Iowa, in the 2002 election.

Thus some Democrats questioned whether Ganske should be allowed to participate, even though he's been leading the bipartisan charge on the matter, going so far as to rebuff President Bush's February request that he remove his name from the bill until a compromise with the White House could be reached. (The request was honored at the time by Rep. Charlie Norwood, R-Ga., who threw up his hands in frustration just two weeks ago and rejoined the bipartisan team last Wednesday.)

But after the preposterous partisan objection to Ganske's presence was brushed aside, there was still the matter of tending to Harkin's needs. So Harkin spoke at the press conference, even though he has played no role in drafting the Senate version of the bill, which was crafted by Sens. Edward Kennedy, D-Mass., John Edwards, D-N.C., and John McCain, R-Ariz. Harkin even spoke before Ganske. Plenty of senators who hadn't played a role in the creation of the bill were present at the press conference, but the only speakers were Senate Majority Leader Tom Daschle, D-S.D., who is bringing the bill to the floor, the three senators and three House members who crafted the bill, and Harkin.

But lots of pols wanted in on the action. Even Sen. Hillary Rodham Clinton, D-N.Y., arrived on the scene, stylishly late. Politicians rarely wear sunglasses at public appearances -- it gives the wrong image -- but Clinton's a different breed of cat. Mondo Hollywood, she made like Gwyneth at Cannes, waving to the crowd and shaking hands with the little people scattered around her, her cool shades keeping her even more remote and aloof than usual.

Such scenes come naturally to the high-profile patients bill of rights, the bill that pits trial lawyers and doctors against HMOs and insurance companies, not to mention McCain vs. Bush, who has pledged to veto the Kennedy-McCain-Edwards bill as it exists now.

A rivalry of more immediate consequence, however, was that between Daschle and Senate Minority Leader Trent Lott, R-Miss. On Monday, Lott and Assistant Minority Leader Don Nickles, R-Okla., said they would use parliamentary tools to prevent the bill from hitting the floor for debate. In response, at the Tuesday morning press conference Daschle not only promised to bring the Kennedy-McCain-Edwards bill to the floor, but also threatened to hold the Senate in session until a bill is passed.

"I intend to put my colleagues on notice this morning: There will be no July 4 recess," Daschle said. "There will be no break until this bill is passed in the United States Senate!"

"To my friends and colleagues: Happy July 4," McCain quipped.

Most Democrats support the Kennedy-McCain-Edwards bill. Most Republicans support its rival, the Bush-backed bill offered by Sens. John Breaux, D-La., and Bill Frist, R-Tenn. Much of the fight is being waged in the battlefield of public relations, to win the small but significant swath of moderates from both parties in the House and Senate.

On the Capitol steps stood Congress members, surrounded by real Americans, cheering their patients bill of rights and deriding the rival bill as a sign of the pending healthcare apocalypse.

"I made a promise to a young man and his mother, a young man who lost both hands and both feet because an HMO made a medically negligent decision when he should have been allowed to go immediately to the closest emergency room," said Ganske. "And I made a promise to that young mother and to that little boy that we would not stop working until we get this patients bill of rights signed into law, so help us!"

But opponents of Kennedy-McCain-Edwards also grabbed for the spotlight on Tuesday. Near the Capitol steps conference, under the shade of oak, Branford pear and gingko trees, roared a dueling press conference. This one featured Congress members surrounded by real Americans, cheering their patients bill of rights. "The most important patient protection is access to affordable healthcare," said Nickles, speaking in favor of Breaux-Frist. "As it stands now, the bill the Senate will be debating does more harm than good. I can't support something that drives healthcare costs up sharply, overturns the good work states have already done on this issue or bankrupts employers who provide health insurance to their employees."

Both bills would give patients the ability to sue HMOs or insurance companies for coverage decisions that adversely affected the health or life of a patient. But the bitter fight being waged involves details about that right to sue. Thursday, Bush aides invited Congress members involved in the debate over to 1600 Pennsylvania Ave. to try to negotiate a compromise, but there emerged two major sticking points.

One, the Kennedy-McCain-Edwards bill sets the cap for punitive damages at $5 million, while the Breaux-Frist bill caps such awards at $500,000. Neither side would budge. (The House bill, offered by Ganske and Rep. John Dingell, D-Mich., has no cap at all.) Second, under the Kennedy-McCain-Edwards bill, states would keep their patient protection laws, and lawsuits against HMOs or insurance companies would be heard in state courts, which tend to offer larger awards. Breaux-Frist, on the other hand, would supercede state laws. Again, neither side would budge.

A third point of contention was voiced Tuesday. "All you folks write about is the right to sue HMOs!" Sen. Rick Santorum, R-Penn., admonished reporters at the press conference in support of the Breaux-Frist bill. "You never write about the issue of suing your employers! But when it comes to suing the employer it is a whole new game! This is a disaster! Write about the issue! Please! This is about employers being sued! Please write about it! Please!"

Santorum's opponents on this issue insist that employers would only be liable if they had a direct hand in a specific decision that denied coverage to the patient whose health was adversely affected as a result.

"Our bill protects employers from liability," McCain said. "I repeat: Our bill protects employers from liability. This is a priority, I believe, that all of us share. We stand ready to negotiate and discuss any issue with the opponents of this bill." But the real Americans McCain's opponents trotted out hammered home their talking points and made it appear that compromise was impossible.

Paul Braun, a milk hauler from Heckler, Ill., said that passage of the patients bill of rights -- which would indisputably raise insurance costs -- could force him to raise fees for the farmers whose milk he hauls. He said he'd like to have either of his state's senators -- Democrat Dick Durbin, in favor of the Kennedy-McCain-Edwards bill, or Republican Peter Fitzgerald, who has yet to take a position on either bill -- explain to his farmer clients "why they have to pay for increased lawsuits."

Other small business owners followed Braun, each bemoaning what the higher costs of health insurance would do to their ability to provide such insurance to their employees. (None mentioned that the Breaux-Frist bill would raise insurance costs, too, although not as much.) Shuttled to the press conference by various business interests -- where they stood with Santorum, Frist, Nickles and Sens. Phil Gramm, R-Texas, and Judd Gregg, R-N.H. -- all of them spoke convincingly about increased costs.

But in terms of P.R. value, they couldn't compete with the boy who lost both hands and both feet because of an HMO, so movingly described by Rep. Ganske.

Or Steve Grissom, the young North Carolinian with leukemia, whose HMO denied him the oxygen his physician prescribed. And on and on, as C-Span 2 cameras rolled and supporters of Kennedy-McCain-Edwards stepped to the mike. If Breaux, Frist, Lott & Co. want to wage P.R. war, they're going to have to do a little better than a milk hauler worried about rising health care costs. Unless, of course, that's all they have.