The California governor brings his Bush-bashing act to Washington. 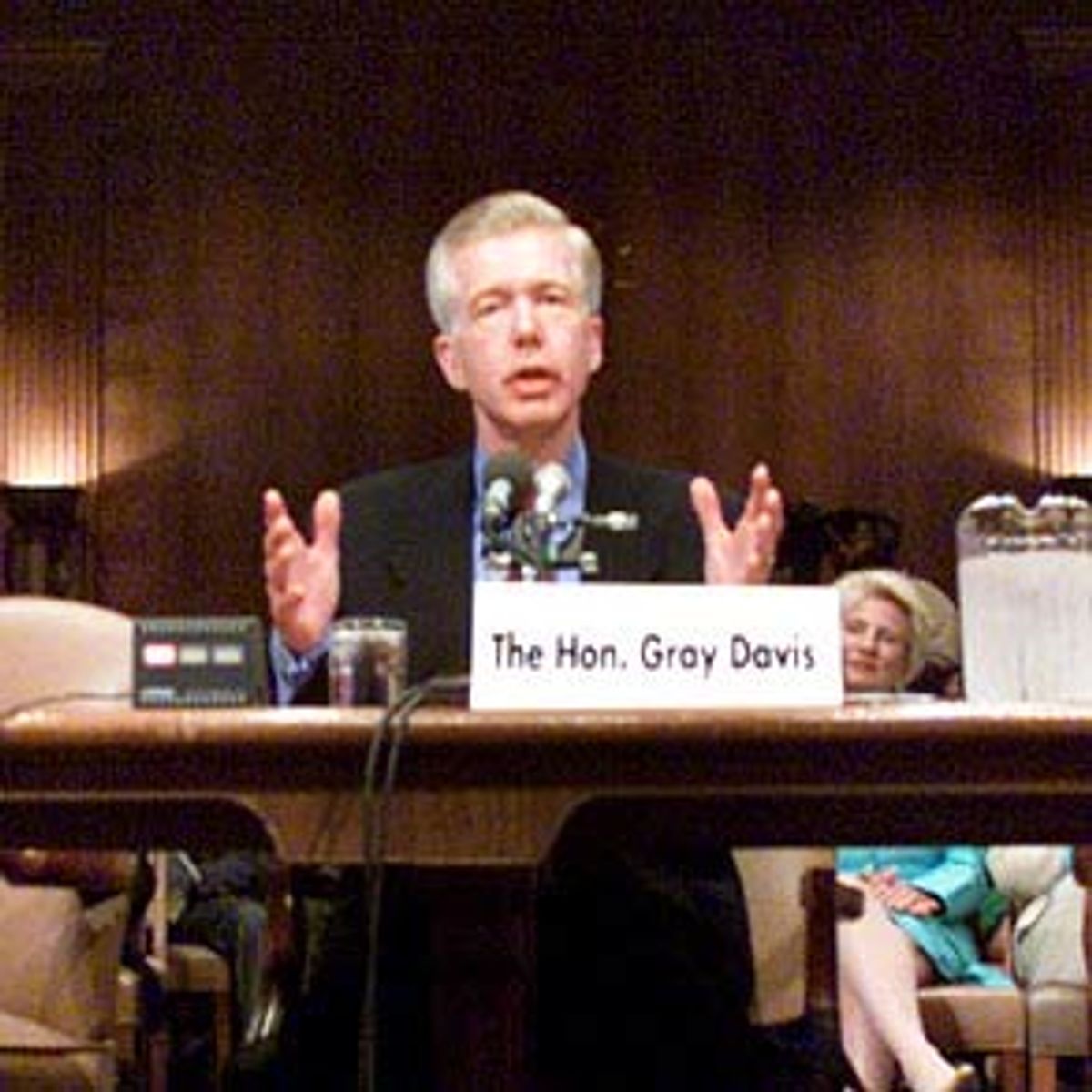 Energy Secretary Spence Abraham was puzzled. It was the evening of May 3, and Abraham, at the behest of President Bush, was meeting in Sacramento with California Gov. Gray Davis to discuss ways they could work together to alleviate the state's energy crisis. Davis spent much of the time talking about the significant conservation efforts his wife has made to substantially reduce the energy bills at the governor's mansion. The meeting was very pleasant.

In the midst of their talk, however, Davis did something that Abraham and his staff thought odd -- a move symbolic of the controversial leadership style, which characterizes what critics see as Davis' mishandling of his state's energy problems.

Mid-conversation, Davis suddenly stood, walked over to the wall and turned off the overhead lights in the room, leaving some dimmer lights remaining on by the side. Davis' sudden conservation moment seemed even odder since it wasn't tough to notice that the building's air conditioning continued to churn out expensive energy-consuming chill, seemingly at full blast. To Abraham and his team, the move seemed a bit, well, weird.

Since that time, of course, the energy crisis has heated up and Davis has gone on the offensive. An energy debacle with a hundred fathers has seen each one deny paternity, Davis included. The Bush White House, demonized by Davis, no longer thinks him merely puzzling. He has become a thorn in their side.

This was evident Wednesday in Washington, where, in an expansive hearing room in the Dirksen Senate Office Building, Davis testified about energy prices before the Senate Governmental Affairs, chaired by Sen. Joe Lieberman, D-Conn. Though myriad witnesses testified -- including the governors of North Dakota and Montana, the attorney general of Washington state and all five members of the Federal Energy Regulatory Commission -- Davis was clearly the main event. And it was Davis who was the target of all the vitriol from the Republican side of the aisle, a direct response to Davis' aggressive attacks against President Bush, FERC and the power industry.

It's been a calculated attack, one masterminded by strategist Garry South, as well as the former spinners for Vice President Al Gore, Mark Fabiani and Chris Lehane -- the latter of whom was present at Wednesday's hearing. As the Wall Street Journal pointed out Tuesday, Davis' new political strategy has worked to a degree, as his poll numbers have begun to rebound. Davis scored another political victory on Monday when FERC voted for limited price caps on wholesale energy prices -- not all of what Davis wanted, but certainly much more than Bush ever wanted to give.

Davis, who faces reelection next year, took the offensive against the Bush administration in May, publicly shellacking the president during his visit to California. Davis has said that the state is "at war with greedy power generators from Texas." In the June 11 Los Angeles Times he said, "The name of this game is leverage. If you don't have leverage over these cowboys, they will steal you blind."

Now that Davis has kicked off his gubernatorial race by running against Bush, the Bush team is returning fire. In California, a new group called the American Taxpayers Alliance, with strong ties to both the RNC and power generators, is planning to spend up to $25 million in advertising against Davis on the energy issue. A key contributor to the group is Reliant Energy, a Texas corporation led by Bush's recount man, James Baker III, and Steve Letbetter, a major Bush-Cheney campaign fundraiser.

"Davis needs an enemy," says one Bush administration official. "He doesn't even have a political opponent in the state." The official argues that the Bush administration has complied with almost everything Davis has requested, except for price caps. And on Monday, FERC even caved on that -- even though Bush spokesman Ari Fleischer prefers to describe price caps as "a market-based mitigation plan."

In an interview with Salon earlier this month, South said the administration's assertion that it has given Davis everything but price caps "is like some murder defendant saying 'I did everything the victim asked me to do but save his life.' That's idiotic."

Davis pushed his cause even further Wednesday, taking his time before the committee to criticize FERC not only for taking its time on voting for price mediation, but for not taking action on providing $9 billion in refunds for Californians overcharged in the past. "To date, not a single penny in refunds has been returned to Californians," Davis said. "It is unconscionable for the generators to profit from their egregious overcharges. FERC must move quickly to enforce the law and order the energy companies to give back the money."

However well FERC-bashing has gone over in the Golden State, the room in Washington was full of skeptics. At the request of Sen. Frank Murkowski, R-Alaska, the Energy Department had issued a report, "The Impact of Wholesale Electricity Price Controls on California Summer Reliability," concluding that two price cap proposals "are likely to increase the number of hours and the magnitude of the outages that California will experience."

And then there was the brass-knuckle politics. Before the hearing began, the RNC also handed out paper fans, mockingly labeled "Gray Davis's solution for summer blackouts." The California Republican Party issued a harsh statement from chairman Shawn Steel, calling Davis "a desperate man. Desperate men tell lies." And in case you missed the subtext of any of these nuanced slams, the conservative group Citizens for a Sound Economy issued a press release declaring that "the energy crisis in California is Gray Davis's Fault!"

The hearing was just slightly more civil. While Lieberman and the other Democrats on the panel -- especially Sens. Patty Murray and Maria Cantwell of Washington state, where the energy crisis is also having disastrous effects -- were full of love and praise for Davis, their Republican colleagues were not so cordial.

"For Gov. Davis this is (about) a bunch of Texas cowboys who got together at the corral and decided to take advantage of California," said Sen. Fred Thompson, R-Tenn., ranking Republican on the committee and former movie actor. While cordially telling Davis that he "wouldn't wish your problem on my worst enemy" -- and adding that he was "especially impressed that you've seen all of my movies" -- Thompson spelled out a number of warning signs that Davis should have picked up on in 1999 and 2000. "I want to ask you how it was that you seemed to let things get totally out of hand?" Thompson asked. "Why didn't you act sooner?"

Davis, of course, maintained that he had been working hard on the energy problem from Day 1, that his administration began licensing new power plants in his fourth month in office, in April 1999, and had been a leader in the conservation movement even before that. But even California Democrats acknowledge, on background, that Davis was slow getting out of the box in tackling the energy issue. Some, like state Treasurer Phil Angelides and state Senate leader John Burton, have been outspoken in their criticism of Davis' handling of the crisis. Signs of the pending crisis started showing up two years ago, and utilities were complaining about retail price caps possibly bankrupting their businesses long before that. Davis did nothing then.

"He could have been [tackling the problem] earlier and better," acknowledged one senior Democrat aide on the Hill.

"The prevailing wisdom among a lot of people is that he waited a little bit too long," added a senior Democratic strategist, who noted that the success of Davis' attacks against Bush and Vice President Dick Cheney as Texas oilmen "is helped by the national perception that every plan the White House presents is bought and paid for by special interests."

Davis did his best to escape blame Tuesday. "Do you not accept any responsibility for not having addressed the structural problems that were inherent in your system?" Thompson asked -- structural problems "that obviously had to be changed when so many of the circumstances were changing, especially in light of your emergency powers, if you needed to exercise them?"

But Davis held firm. "You know, it's nice for us to sit back here and talk about passing on the true price of electricity," Davis said, responding to GOP charges that the retail price caps of a year ago should have been lifted and much of today's problem could have been avoided. "But let me assure you, if I passed on a 700 percent increase to the citizens of California, there would be an outrage the likes of which you have never seen."

Democrats gave Davis a respite from the tough questions. Sen. Robert Torricelli, D-N.J., had praise for Davis, pointing out that the number of power plants that have begun construction under his watch is unprecedented. Torricelli's remarks -- "there is not a question in there," he himself noted -- were so glowing that after he spoke Lieberman joked, "I'm going to advise you, Governor, after Sen. Torricelli's comments you can rest your case."

But rising from these titters boomed the voice of Sen. Bob Bennett, R-Utah, advising Davis, "Don't get too comfortable."

Bennett read from a number of harsh editorials from California newspapers, accused Davis of trying to "nationalize" the energy industry in his state the way that the Labour Party once tried to do in Great Britain. Bennett was followed by a fellow former governor, the low-key Sen. George Voinovich, R-Ohio, who suggested that "the finger-pointing ought to end."

More pointedly, Sen. Pete Domenici, R-N.M., presented research that indicated that Davis had been presented with "11 opportunities at different times ... when you as governor either were offered the opportunity to enter into long-term contracts [for power] or urged by some committee or group about the possibility of entering into a long-term contract, but the recommendation went unheeded."

But at a press conference later that afternoon, none of the pointed barbs seemed to matter to Davis. Standing with 11 House Democrats, Davis argued that his "campaign" tactic of pressure was working. (He also clarified his choice of the word "campaign" as representing "not a political campaign" but one for a policy.) "The pressure brought us the relief that we received on Monday," Davis said. When asked about the fact that he didn't seem to have many friends on the GOP side of the Senate committee, Davis seemed nonplussed.

"Just a few months ago, everyone on the Republican side found the word 'price cap' abhorrent," Davis said. "And yet because of a concerted effort over the past year on my part, and several months on the part of some in the Congress" FERC initiated the limited and temporary price caps. "There is no doubt in my mind that the FERC action is a direct result of that pressure," Davis said.