The "look but don't touch" girls

Louis Meisel, the king of the pinup, celebrates the goddesses of all-American flesh. 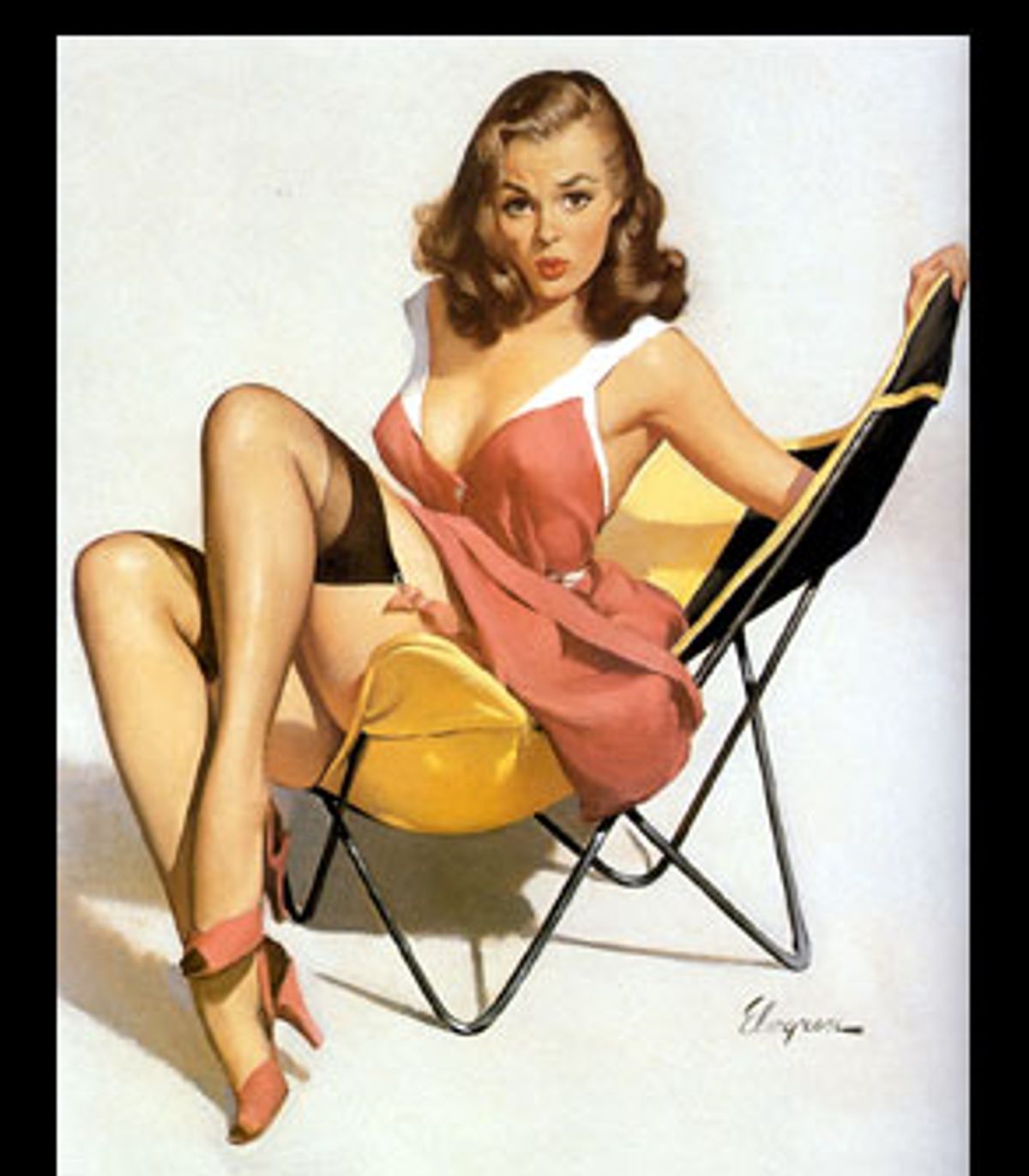 Those American girls. Sitting primly in their sleek swimsuits -- hands behind their heads, their breasts like happy nose cones. They were "look but don't touch" girls.

Pictures of these dolls were called "cheesecake." Supposedly the term comes from a photographer's trick to induce a smile: "Say cheese." But a distant fable says that, in 1912, New York Journal photographer James Kane was developing a photo of an actress whose gown had slipped open. The man was at a loss for words at this vision of delicious flesh. All he could finally say was "What cheesecake!"

"What cheesecake!" was probably the first exclamation out of Louis K. Meisel's mouth when he was a baby in 1950s Brooklyn, N.Y. Meisel is perhaps the foremost expert on the American pinup, that cultural icon whose golden age occurred between 1930 and 1960, when pastel and airbrushed paintings of long-legged, busty dames graced magazine covers, barbershop calendars and even the sides of Air Force bombers.

In the past 20 years, there has been a resurgence of interest in cheesecake. "Everything that you've seen happening, without bragging, is 100 percent due to my efforts for showing pinups as fine art in this gallery," Meisel says. "I'm a collector first before I'm a dealer," he says. "Somewhere back around 1975 it occurred to me that the original works by the pinup artists of the '30s, '40s and '50s were absolutely undercollected, undershown."

Meisel tells the story of how Brown & Bigelow, the biggest calendar company in the country, was going bankrupt in 1972. To raise money it unloaded its extensive archives of girlie art by selling original paintings for 10 bucks apiece. "I began seeing pinups in flea markets, and now I have the biggest collection in the world."

Meisel is a handsome, suburban-looking middle-aged guy. He doesn't resemble a trendy SoHo gallery owner. Neither does he look like a guy with an out-front obsession for American sexual nostalgia. "Pinups aren't generally about nudity," he explains while showing off his collection. "Pinups are about the all-American girl that the boys fighting the war dreamed of coming home to, finding and marrying. As you got into the 1950s, pinups were what women wanted to look like. That's what men wanted women to look like." Meisel gets sad. He speaks three "P" words slowly: "Playboy ... photography ... pubic hair." That killed it for pinups.

The basement of Meisel's SoHo gallery is stacked with the revered paintings. Meisel is clearly in love: "Look at the difference between this girl in the 1950s in her bikini and this girl today in her negligee. There's a nurse lying on her stomach. There's a woman in a red dress with wind blowing up her skirt. This is from Stocking Parade Magazine. Women wearing evening gowns were called 'glamour' pictures. Look at that one: She's wearing a miniskirt holding a gun. That's 'Fishing Girl 1958,' 'Shuffle Board 1949,' 'Miss Sylvania 1960' in an evening gown. Look at this -- this is the original painting: the girl in a one-piece bathing suit waving. This was the original sketch. She's wearing a polka dot bikini. The calendar company asked him to change her into a blond wearing a one-piece suit."

Meisel's appreciation for pinups may seem like a retro masculine wet dream, but some so-called third-wave feminists also champion pinups. Art historian Maria Buszek claims that, during World War II, Rosie the Riveter found pinup dames an inspiration. Pinups "provided a model through which women could construct themselves as the image of the contemporary homefront woman: at once both conventionally feminine and transgressively aware of her own power and potential for agency on levels both personal and political. Furthermore it can be argued that the Vargas Girls' icy, controlled presence seemed the perfect stance to emulate for a nation of young women looking to assert this new-found sense of awareness and control over their own sexuality."

That said, the most striking quality of any all-American pinup is the girl's bullet-shaped chassis, her substantial breasts. The subject of hooters is the one thing that gets Meisel tongue-tied. "Big breasts? No. That's not true." [Pause] "Not necessarily." [Pause] "Do they or don't they -- I dunno." [Pause] "Let's just say that for women in the 1950s it was OK to have bigger breasts than in the 1960s with Twiggy and the 1970s." [Pause] "But now it's come back to that. Now you have more full-figured women who look like women." What if you're a leg man? "Legs were important," he says. Then, for the first and only time, he gets close to vulgar and says, "Tits and legs." [Pause] "Not too much ass back in the 1950s. You see very few backfield views."

Meisel's contributions to American art extend beyond the objectification of women in the form of cheesecake. He's the one who coined the term "photorealism." "I had a very small art gallery on Madison Avenue in 1967," he explains. "I was 25. There was no way I was going to represent the abstract expressionists or the pop artists. Then I saw a Chuck Close painting. I began gravitating to artists like him. They didn't do many paintings a year; I could fit them in a gallery. No one else was paying attention. Somebody said, 'What do you call it?' I coined it 'photorealism.'"

Meisel soon fell in love with all aspects of American realism. He mentions Norman Rockwell and Andrew Wyeth in the same sentence. Then he laments, "While abstract expressionism reigned supreme, realistic art was stuck on the back shelf." He says "the well of American realism" included the Hudson River School, the Ashcan School and the Luminous Artist School. He adds, "Where was their outlet? In illustration, magazine illustrations, book covers, calendars. While Jackson Pollock was reigning supreme there were still great American realists like Gil Elvgren."

Perhaps Elvgren (1914-80) is the perfect subject for Ed Harris' follow-up to "Pollock." A typical Elvgren painting has a busty blond wearing black stockings, straddling the back of a polar bear rug. Jackson Pollock, roll over!

Last year, Meisel wrote the book "Gil Elvgren: All His Glamorous American Pin-Ups." Next fall he will complete a book on the "father" of the pinup, Rolf Armstrong (1889-1960). Meisel is quick to point out that although these pinup artists were forgotten to cultural history, they were among the most successful artists of their day. "In 1947, Elvgren was getting $5,000 a painting. He was making $75,000 a year. At that point, my father was making $5,000 a year and we were living very nicely in our own house in Brooklyn."

While pinup artists gather belated respect, let's not forget the stacked dishes (women) they painted. All the great pinup artists worked from live models or posed photographs. Meisel mentions that Norma Jean did pinup modeling before she became Marilyn Monroe. He mentions several other actresses, including Barbara Hale (Perry Mason's secretary Della Street), who modeled for artists while she was at the Art Institute in Chicago. Meisel shows his single painting of Hale, posing gracefully in a green evening gown instead of a skimpy bathing suit. Nothing that would get Raymond Burr hard.

Meisel then talks about the most famous pinup model of all time, Bettie Page, who posed only for photographs, not pastels. "Bettie started modeling when she was very young, in 1951," Meisel says. "She came to New York. She was a total fun-loving girl. A guy named Irving Claw would pay her $50 per hour to pose and then could charge 20 photographers 20 bucks apiece to photograph her for an afternoon. She'd take off her top. Jump in the surf. And they'd be clicking. There were billions of photographs taken. No model's releases were signed. There were no residuals. The photographers would sell their pictures wherever they could. Then, in 1957, Bettie became a born-again Christian and quit the business."

At first glance, a photograph hanging on Meisel's wall appears to be of Meisel and Bettie Page. But the dame isn't Page. It's Susan, his wife. He makes no bones about the resemblance. He says he found his own Bettie Page. Obviously this man's taste in art and women is one and the same. More than once, he says, "This is what women wanted to look like. That's what men wanted them to look like. There was no 'politically correct' back then."

Perhaps the only historical aspect of pinup art that Meisel has neglected is the Caucasian factor. He mentions that the great Vargas painted a few black Playmates with Afros in the 1960s. Other than that, Meisel knows of no African-American pinup art.

But feminist historian Joanne Meyerowitz (editor of "Not June Cleaver: Women and Gender in Postwar America, 1945-1960") reveals that Ebony and Negro Digest contained chocolate cheesecake for a few years after World War II. These girlie pictures were controversial among the magazines' mostly female readership. Although most women were offended because of predictable moral reasons, there were a surprising number of pro-pinup readers. One subscriber wrote, "The white man glorifies the pulchritude of his fair sex in his magazine and daily papers. I commend you for taking the lone stand in doing the same for Negro women."

No doubt the political and social stance toward the golden age of pinup art will bend according to the intellectual whim of each succeeding decade. It's good to remember that Titian was really just a part-time cheesecake painter in 16th century Venice. Whether or not any of the American realists who painted pictures like those of the embarrassed "fishing girl" -- the bimbette who accidentally hooks up her own skirt, revealing long gams and garters -- are great artists, they capture the mythology that Americans are essentially innocents. After all, "fishing girl" is never mortified that her panties are revealed, only pleasantly startled. For this reason Meisel's cheesecake collection is more intrinsically American than Mom's apple pie.