From Fritz Lang's "Metropolis" to Steven Spielberg's "A.I.," the line between man and machine has never been clear. 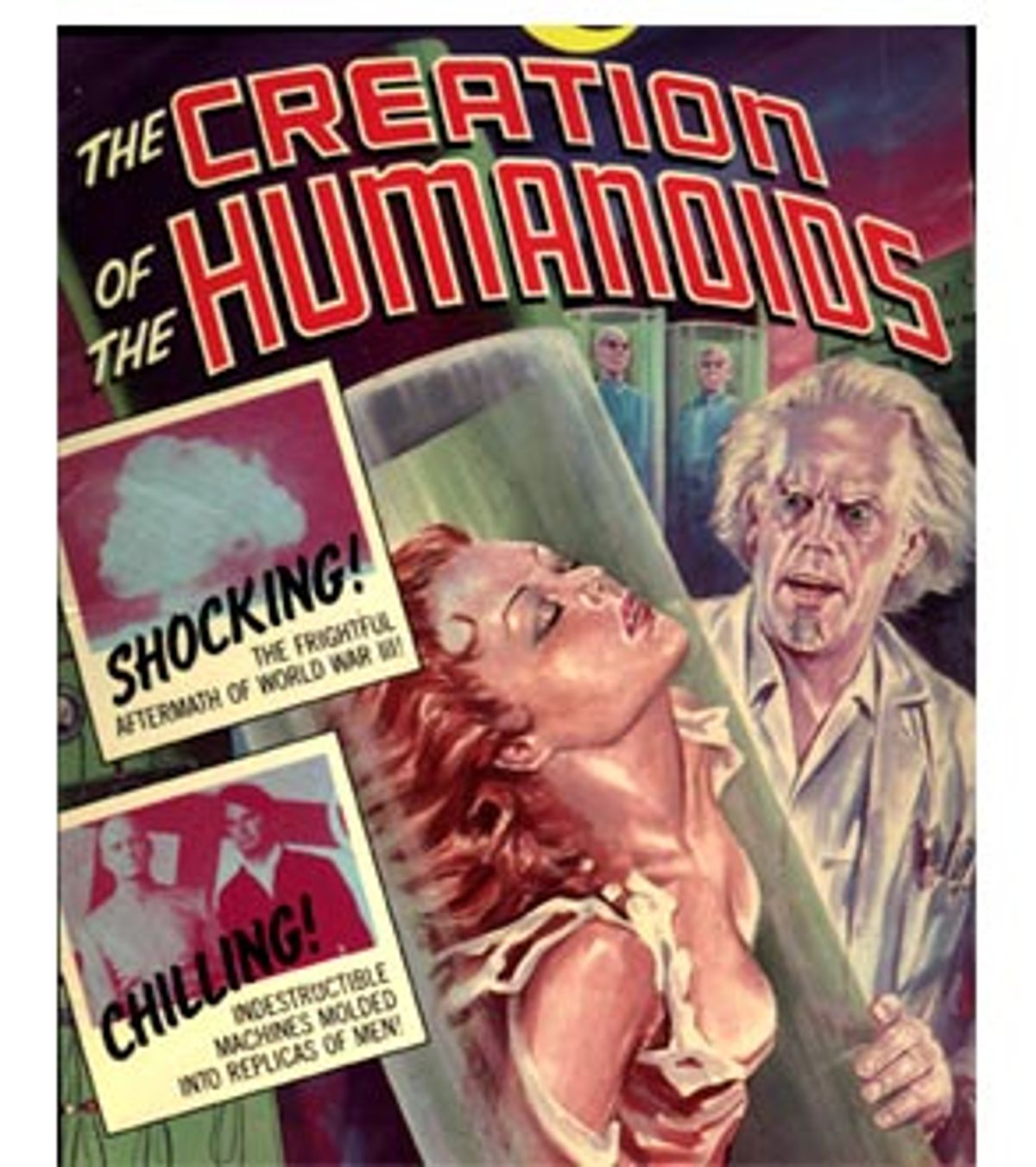 From the destructive mechanical witch of the silent era "Metropolis" to the parasitic life-sucking machines of "The Matrix," robots -- the technologized humanoids of science fiction -- have sought to destroy or enslave humanity over the history of film. Most science fiction cinema -- obsessed with enraged robots, demonic supercomputers, killer cyborgs and human-hating androids -- taps into our anxieties about losing our evolutionary status, human identity and moral values to artificially intelligent machines.

The obscure 1962 B-movie "Creation of the Humanoids" is one of the few movies to deal sympathetically with intelligent machines; it's the story of empathetic robots who carry out a plan to save humanity. In its sympathetic treatment of robots, it may be the key cinematic predecessor to Steven Spielberg's upcoming "A.I." Inspired by a Brian Aliss short story, "Super-Toys Last All Summer Long" (you can read it here), "A.I.: Artificial Intelligence" represents the collaboration of two master filmmakers: Stanley Kubrick, who spent several years developing the project, and Spielberg, whom Kubrick asked to direct it. After Kubrick's death, Spielberg wrote the screenplay himself and modeled the visual design on storyboards Kubrick had supervised. "Creation of the Humanoids" seems to contain several of "A.I.'s" themes: This slow-paced, funny, intellectually complex film shows robots capable of love and sex, robots oppressed by human hate groups and robots who are morally superior to humans.

The earliest cinematic robot is Maria, from "Metropolis" (1926), Fritz Lang's classic dystopian vision of the future. Lustful mad scientist Rotwang (Rudolf Klein-Rogge) creates Maria (Brigitte Helm) to reflect his vision of the perfect submissive woman. But Maria rebels against her creator and provokes a worker revolt that threatens to destroy the entire city. Sexually aggressive and a threat to humanity, Maria embodies the male fear of uncontrollable women and machines. At the end, she is burned at the stake as a kind of witch.

The anti-technological themes continued in James Whale's 1931 "Frankenstein," which combines Gothic horror and science fiction with a monstrous created-by-science artificial human that goes violently berserk. A few years later, evil mechanical men appeared in the Flash Gordon science fiction serials that pit the hero against the high-tech Ming the Merciless.

Although a killer alien robot -- Gort -- incinerates dozens of Army men in "The Day the Earth Stood Still," Robert Wise's 1951 classic is actually a harbinger of the new docile robot of the '50s. Reflecting writer Isaac Asimov's laws of robotic obedience, "Forbidden Planet" stars Robby the Robot -- superior to humans, yet their benevolent and tireless servant. Prototype of the cute, lovable robot and the first robot celebrity, Robby inspired decades of meek, servile machines like Huey, Dewey and Louie in "Silent Running," C-3PO and R2D2 in the "Star Wars" movies, Johnny No. 5 in the "Short Circuit" films and, most recently, Andrew (played by Robin Williams) in "Bicentennial Man," recently adapted from an Asimov story.

With the dawning of the computer age, artificial intelligence temporarily replaces robotics as an object of technological terror. "Forbidden Planet" imagines an evil supercomputer as big as a house, with the power to materialize murderous monsters from the human id. "The Invisible Boy," which also stars Robby the Robot, envisions a colossal supercomputer that plans to exterminate all organic life in the universe. Cruel, emotionless, world-controlling computers also show up in "The Colossus of New York" and "Colossus: The Forbin Project."

Androids -- human-looking robots endowed with artificial intelligence -- emerge in 1973's "Westworld," which centers on an Old West theme park, populated with animal and humanoid robots. Purposefully mocking Asimov's laws of obedience, the robots -- led by gunslinger Yul Brynner -- run amok in this bizarre extension of Disneyland. "Westworld's" sequel, "Futureworld," goes further: The androids design and produce more sophisticated robots, who break out of the vacation resort to destroy and replace humans in the real world -- the ultimate robot threat.

Fusing cybernetic machine with biological organism, cyborgs rampage through films such as "Robocop," "The Terminator" and "Terminator 2: Judgment Day." These macho machine-men embody the fear and awe of technology, visualized as massive mechanized bodies that overpower frail human characters. Like the robot Maria in "Metropolis," the female cyborg in "Eve of Destruction" associates fear of technology with unleashed female sexuality and "Terminator"-like hyperviolence.

This science fiction technophobia continues in recent films like "The Matrix," in which artificially intelligent machines control and exploit humanity. Grown rather than born, millions of humans lie cocooned in gel-like pods, fed intravenously with nutrients while their bodies provide power to these all-powerful parasitic machines. Human rebels -- led by Morpheus (Laurence Fishburne) and his recruited savior Neo (Keanu Reeves) -- must fight the machine technocracy to free the human hosts.

While most science fiction films show artificially intelligent machines as emotionless, power-mad, murderous and morally inferior to humans, a few fascinating exceptions buck this trend. Like "A.I.," these movies portray robots as more capable of empathy, generosity and love than humans. In "Android," robot Max -- a kind and gentle soul -- floats in a laboratory spaceship with snarling Dr. Daniels, a cruel mad scientist. On a quest to create the perfect robot slave, he builds sex worker android Cassandra and terminates Max. But, recoiling from Dr. Daniels' lustful touch, Cassandra resists her programming, she recharges Max and together they escape to provoke an android revolution.

Classic cyberpunk movie "Blade Runner" imagines beautiful, life-loving android "replicants" -- the workers, entertainers and soldiers of the future -- revolting against their servile positions and their coldhearted human creators. Bounty hunters or "blade runners" put aside their human compunction and unfeelingly kill these humanoids, whose chief crime is asserting their desire to live and love. Lead android Roy Batty (Rutger Hauer) expresses humanity by sparing the life of blade runner Rick Deckard (Harrison Ford). Inspired, Deckard rediscovers his human feelings, stops killing androids and even falls in love with one.

"Blade Runner" captures the ambiguity between man and machine that the best science fiction movies aspire to. Here, too, "Creation of the Humanoids," nearly 40 years old and created by filmmakers now forgotten, anticipated "Blade Runner," "Android" and "A.I." "Creation of the Humanoids" -- promoted as Andy Warhol's favorite movie -- describes a post-apocalyptic world where the dividing line between human and robot no longer exists. As in "A.I.," humans despise robots. "The more we become like men, the more they hate us," says one robot. Disparagingly calling robots "clickers," a group called the Order of Flesh and Blood -- a kind of futuristic Ku Klux Klan -- lobbies for anti-robot laws and harasses the robots at every opportunity. The most zealous anti-robot proselytizer, Cragis, condemns his human sister for living in sin ("rapport") with humanoid Pax, a charming robot "love machine" like Gigolo Joe in "A.I."

Declaring that "humanity doesn't always know what's in its best interest," the Robot Central Committee for the Preservation of Mankind carries out a secret plan to save dying, radiation-poisoned humans by transferring their minds into immortal, mechanical humanoid bodies. Robot-hating Cragis and his girlfriend turn out to be highly sophisticated robots, with artificial souls and recently designed reproductive technology. The revelation stuns them into accepting their roles as Adam and Eve to a new robot generation. The film has stilted, often hilarious, philosophical dialogue that eerily echoes the present-day theories of A.I. experts Ray Kurzweil ("The Age of Spiritual Machines") and Hans Moravec ("Robot: Mere Machine to Transcendent Mind"), but among its sci-fi cinematic brethren, "Creation of the Humanoids" is unusual in that it -- like the upcoming "A.I." -- dares to suggest that robots may be the next stage in human evolution.

Dan Dinello is a Chicago writer, teacher and filmmaker.