Eddie Murphy goes animal crackers again -- and reminds us how truly funny he can be. 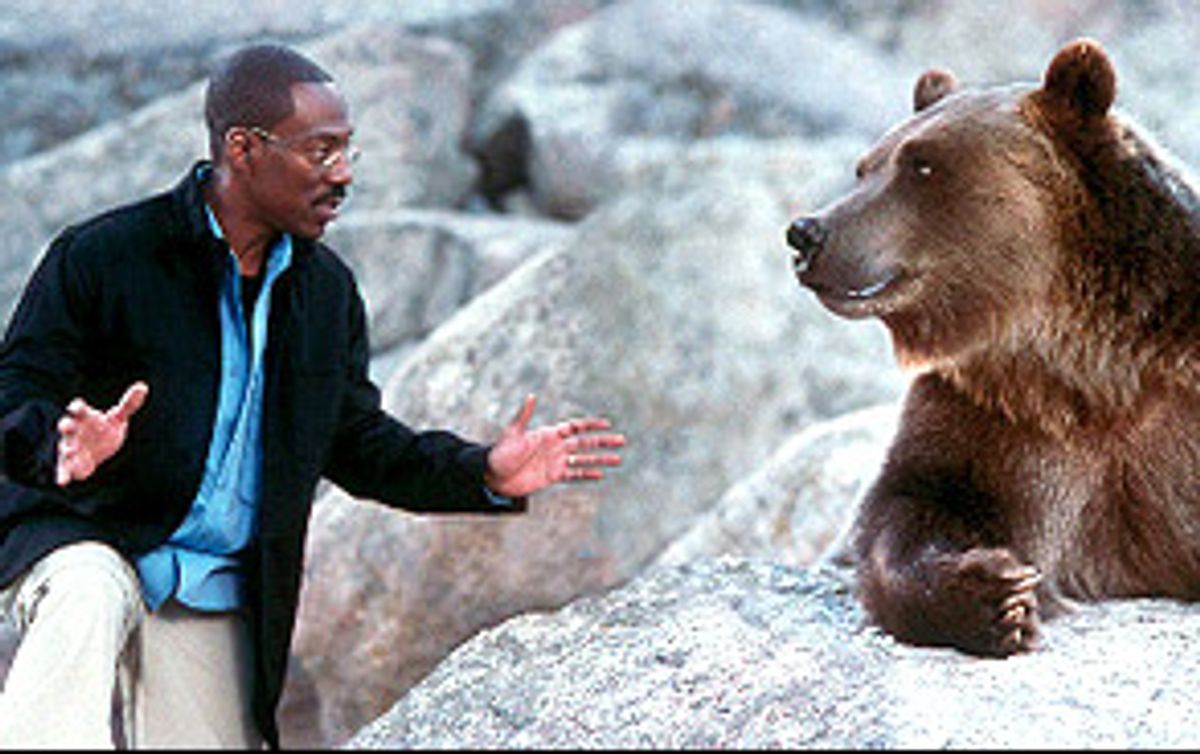 Being a sucker for animal gags, I was easy pickings for the first "Dr. Dolittle," starring Eddie Murphy. There wasn't much sophistication to bits like the antics of a monkey that was hooked on the sauce or a flock of sheep announcing "Ouh-hr-hr-hr butts hurrrt," but the good-natured silliness of it all kept me laughing.

The new sequel provides more of the same. Both movies operate from a clever reversal: Dr. John Dolittle is no longer the man who talks to the animals. He's the man who discovers that the animals talk to him, which makes his life crazy. The laughs are provided by the celebrities providing the voices of the animals that show up at all sorts of inopportune moments to pester Dolittle with their problems and ailments. The result is the reverse of the sickly-sweet anthropomorphizing done in those Disney nature adventures that many of us grew up watching.

In fact, if you're over a certain age (say mid- to late 30s), the Dolittle movies can make you realize that in one respect, today's kids have it much better than my generation did. When we grew up we were constantly being taken to family comedies that we had to pretend to enjoy -- things like the Disney comedies starring Dean Jones or a Volkswagen; Jones was the one that talked -- though they had none of the kids' humor that made us laugh when we were with our friends. Today's family entertainment doesn't shy away from the scatological humor that kids love. It's a silly kick to go to something like "Spy Kids" (one of this year's nicest surprises) and hear a placid computer voice aboard the kids' custom-built spymobile announcing "Flushing your poo" after they use the toilet.

"Dr. Dolittle 2" has a smattering of that type of humor and in its small way it's liberating. You feel like the people who made it have allowed kids to be kids. It ain't Molière but it's a damn sight better than "Herbie Rides Again." And for parents, I imagine that movies they can enjoy with their kids without feeling that they've been exiled to Candyland are something like a small blessing. "Dr. Dolittle 2" can get a little sickly sweet when it's singing the praises of family, though those moments are mercifully brief.

The chief conflict is between Dolittle and his teenage daughter Charisse (Raven-Symoné, a name that sounds like one of the movie's animal characters), who's at the age where she's embarrassed by her family in general and by her father's talent in particular. The resolution of the conflict (which is surprising and rather touching) makes up for the small slack spots it causes earlier on.

The plot has Dolittle trying to keep a forest from being destroyed by a lumber company. The key is the presence of an endangered species, a female bear that has no prospective mating partners. Dolittle locates a male bear that has grown up in a circus and the courts give him a month to successfully introduce the animal into the wild and ensure that it will mate with the female.

Both of the Dolittle movies feature a pair of actors giving hilarious voice to an animal couple. In the first one it was Garry Shandling and Julie Kavner as pigeons undergoing marital problems. Here it's Lisa Kudrow as Ava the female bear and Steve Zahn as Archie the circus bear who has to become her alpha male. Their voices are immediately recognizable and call up their screen personas -- which adds to the laughs. Kudrow uses that distinctive delivery of hers, both offhand and as direct as an arrow flying to the target, and Zahn, even without our having a glimpse of him, indulges his talent as one of the movies' most entertaining goofballs.

The gag of Archie is that having been raised in circuses and shows, he has become the ursine version of a Vegas lounge entertainer. When he turns up in the forest he regales the animals that have turned out to welcome him with his version of "I Will Survive." For a while it looks like an empty boast. Archie is so domesticated that as he pads through the wilderness he complains his paws are getting dirty, and when Dolittle rips off a hunk of tree bark to show him the yummy insects underneath he blanches. It's a durable setup and writer Larry Levin and director Steve Carr (taking over from Betty Thomas) score consistent laughs with it.

Zahn and Kudrow aren't the only animal showmen here. The Firesign Theater's Phil Proctor returns as the drunken monkey whose every appearance is a hoot. Jacob Vargas does a funny Frito Bandito turn as Pepito, a chameleon who can't manage to change his color. One of the funniest strokes is presenting the woodland creatures not as helpless little furries but as having organized themselves like a crime family. Director and sometime actor Richard Sarafian plays the beaver, who is don of the forest. Michael Rapaport is the raccoon who serves as his underling. ("When the Beaver offers you a fish, you take the fish!" he warns Dolittle at one point, enforcing proper respect for his don.) And Andy Dick as a weasel who witnesses some corporate nefariousness is funnier than he has ever been in person.

By contrast, Murphy is the human straight man. But watching "Dr. Dolittle 2" provides something of a revelation into his style of comedy. Watching Richard Pryor play nice in the lousy comedies he was shoehorned into was always a miserable experience because they gave him no room to cut loose. But those restraints work wonders for Murphy, and it's not just that he's found better vehicles than Pryor managed.

Left to his own devices, as in his early stand-up routines, Murphy was like a third-rate imitation of Pryor. Where Pryor's flights of obscenity came out in a stream of lyrical rage, a testament to the demons he was wrestling with, Murphy's profanity was calculated, ugly. He was less a man beset by demons than someone who knew he could get laughs with his misogynist and homophobic routines (which, in fairness, he has since apologized for). Working within the confines of a family comedy, Murphy is able to remind us how truly funny he can be.

His work in the "Dolittle" movies isn't the comic tour de force he gave in the two "Nutty Professor" pictures. Those movies worked not just on their own terms but as insights into Murphy's attempts to remake himself. If roly-poly Sherman Klump was the sweetie he wanted to be, Buddy Love represented the persona of the mean-spirited, vulgarian jive artist that Murphy had used for his early success. The movies were the honest expression of a comic trying to change without losing what made him funny. It worked. Murphy's impersonations of the Klump family (particularly the oversexed grandmother and Sherman's sweet, doting mama) add up to some of the most brilliant comic acting in recent movies.

As Dr. Dolittle, Murphy is essentially playing second banana to the animals, but he assays that function with becoming self-effacement. Here, he also gets to parody the macho stance that was often so insufferable in his stand-up routines. Dolittle is the only man in a house of women, his lawyer wife, Lisa (Kristen Wilson, who has a warm, canny presence), and his two daughters, Charisse and Maya. As such, whenever he tries to play the husband or father throwing his weight around, he's immediately called on his masculine bull.

These bits give Murphy a chance to parody the hotheaded macho anger that his comedy once seemed to embody. And it also allows one of his least-remarked qualities to come forth -- his almost prissy side. When he's admonishing Charisse for the sexy dancing he catches her doing alone in her room and imitates it with popped eyes and pursed lips, he's like the black father as Church Lady, a combination of paternal authority and spinsterish shock.

The animals, though, are the stars here, and after a while their one-liners and comebacks seem natural. The six Johnny Weismuller-Maureen O'Sullivan "Tarzan" movies gave us African jungles full of animals as acrobatic vaudevillians. The "Dolittle" movies give us animals as the comics who warmed up for those acts. It's a world where everyone is competing to be the funniest smartass on four legs. Walking down the street after I saw the movie, I passed a Chihuahua and realized that I was bracing for it to make some wisecrack. I'm still disappointed that it didn't.