He just reinvented comedy, and boy are his arms tired

No, but seriously, Mitch Hedberg is the funniest new comedian in the world. 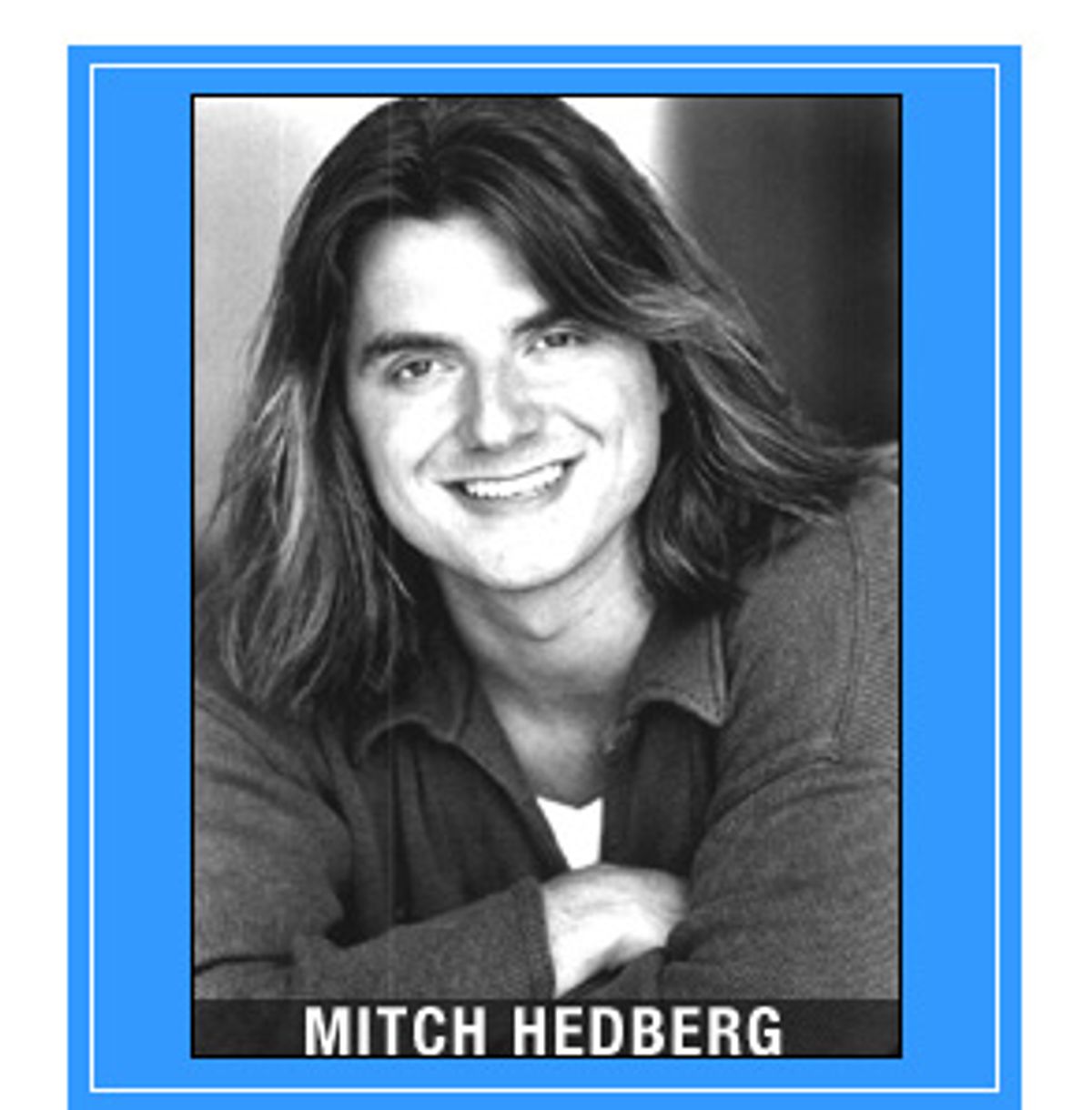 Someone should do a study on how many stand-up comics wore trench coats in ninth grade and had to take frequent walks through the school metal detector.

It's OK to say most comedians are depressing and frightening -- nobody knows that better than comedians. When they aren't joking about how pathetic they are, well, it's unclear what they're doing. They say weird things about breasts. They make dumb thumping noises into the microphone. They point at fat people in the audience and talk about how old the Rolling Stones are. They squeeze their bland misanthropy into 10 minutes of sarcasm and you turn off the TV with a shudder. Mitch Hedberg is here just in time. He makes people laugh.

The 32-year-old Minnesota native is kind and thoughtful and sort of hip, and says gentle things about cute animals and food. It's working, too. He's been on "Letterman" seven times, he has a CD, his headline shows sell out and he had a small part in last year's "Almost Famous." (In the scene, he smoked fake pot with Peter Frampton, which he says is even better than smoking real pot with someone who looks like Peter Frampton.)

With his long hair, dark glasses and slow, amiable grin, Hedberg will have you convinced he's just another dope fobbing off boring pot humor at first. If he makes one joke about getting high, he has said, people will approach him after the show and ask why he only talks about drugs.

He doesn't. Like most comedians, he talks about everyday things. The difference is that he seems to earnestly enjoy the funniness of eggs or tightrope walkers or frozen bananas. His goodwill, which in real life would seem ordinary, is shocking in front of a red curtain.

"My apartment is infested with koala bears. It is the cutest infestation. When I turn on the light, they scatter, but I do not want them to."

Of course it's more than just niceness. He's also funny and extremely offbeat -- something that gets him compared to Steven Wright a good deal. On paper, Hedberg does sound like Wright. He inflects observational humor with kookiness and skips the narrative setup. It's in the delivery that he leaves Wright in the dust. If Wright's superdrollness amounts to something of a joke-telling robot, Hedberg never lets you forget there's a ghost, or at least a frog lover, in the machine. With his chuckling, awkward pauses and apologies for confusing non sequiturs ("sorry, that last part didn't make no sense"), he comes across as vulnerable and real.

"I love Steven Wright," he told Shecky magazine, "but as far as him being an influence, I can't measure that. Let me say this: If I made potato chips, and I decided to pack them in a skinny can, people would say I was like Pringle's, but what if I packed them in a bag?"

The vulnerability never seems like shtick, and the effect is that you're watching your good friend be funny. Which is refreshing, given how stand-up comedy often relies on an unfortunate alienation between performer and audience. Even with Jerry Seinfeld -- a funny guy -- the taxi-drivers-are-crazy routines sometimes feel a little too hostile. Hedberg doesn't utter a single criticism, nor does he fall back on self-deprecation.

Hedberg chooses to throw the ball at the softest walls he can find. Swiss cheese, shish kebab, ant farms -- and the result is as lively as anything Brooks can come up with.

"When someone tries to hand me a flier, it's like they're saying, 'Here, YOU throw this away.'"

Maybe this is what's strange about his show: For an hour, we realize, we've been laughing at good old-fashioned jokes. They aren't ushered through with funny faces, innuendo, irony or quirky neuroses. It's just trees and animals, and they're a riot.

Not that they jump off the page, exactly. With Hedberg's jokes, you had to be there, and if you weren't, the best you can do is try to imagine a funny guy saying them:

"I'd like to talk about the differences between frogs and bears. I know, it's a cliché."

"Escalators are never out of order. They're just temporarily stairs."

"Foosball is a combination of soccer and shish kebab."

Hedberg performs eyes closed -- perhaps his only gimmick. He mumbles, swallows a joke now and then and occasionally tells the punch line first. The amateurism is endearing. So is his own running response to it, which oscillates between "fuck it" and "oh fuck."

This confused oscillation gels with his overall routine -- maybe it's the creative cousin of stoner shtick after all. Whereas the average stoner stage persona just provides a character through which the comic may act stupid, Hedberg liberates the weird cleverness and dispenses with the ums and uhs.

"I'm against picketing, but I don't know how to show it."

In person, Hedberg is the same combination of tender, reserved, sharp and stoned. He's neither cocky nor modest, probably because his talent seems as new to him as it does to the audience. Hedberg began comedy relatively late, after a string of unfulfilling kitchen jobs in Florida. He still seems surprised about his success, or at least curious about it.

"I like to play blackjack ... I'm not addicted to gambling; I'm addicted to sitting in a semicircle."

At one show, someone in the crowd farted. Nobody heard the indiscretion, but Hedberg smelled it. You'd have thought we'd gone to war. For five minutes, he struggled dramatically against the stink, barely able to get through a sentence without collapsing in prim revulsion. "It's ridiculous," he cried, wrapping himself in the stage curtain, "it's fucking me up."

It was a riff on James Brown feigning injury onstage: the conceit of the enduring, defiant performer meets the conceit of someone cutting the cheese. And as with Soul Brother Number One, we get sucked into Hedberg's drama no matter how sure we are that no one actually cut one. We worry for his nose as we would worry for a friend's, a brother's, a son's.

"If you had a friend who was a tightrope walker and you were walking down the street together and he fell, that would be unacceptable."

Time magazine has called Hedberg "the next Seinfeld." It just meant, surely, that he's really funny. The two jokesters have little else in common. Where Seinfeld goes for Porsches, extremely young women and credit card commercials, Hedberg likes watching his local weatherman and used to live in a car. Not that he slacks. ("I'm not a slacker. I just don't tuck in my shirt.") He wrote and directed his own movie -- the film made it to, then bombed at, Sundance -- and now keeps a packed touring schedule.

So Hedberg is the next something. And just in time. With a wealth of comic material looming around the corner -- global warming, an energy crisis, three more years under Bush -- America needs a comedian who will, with precision timing and unerring nerve, explain how cute and soft and huggable koalas really are.