Bush's tax cut, based on deceit and bad math, doesn't just screw us economically -- it exposes an administration that's both blind to our needs and less effective than ever. 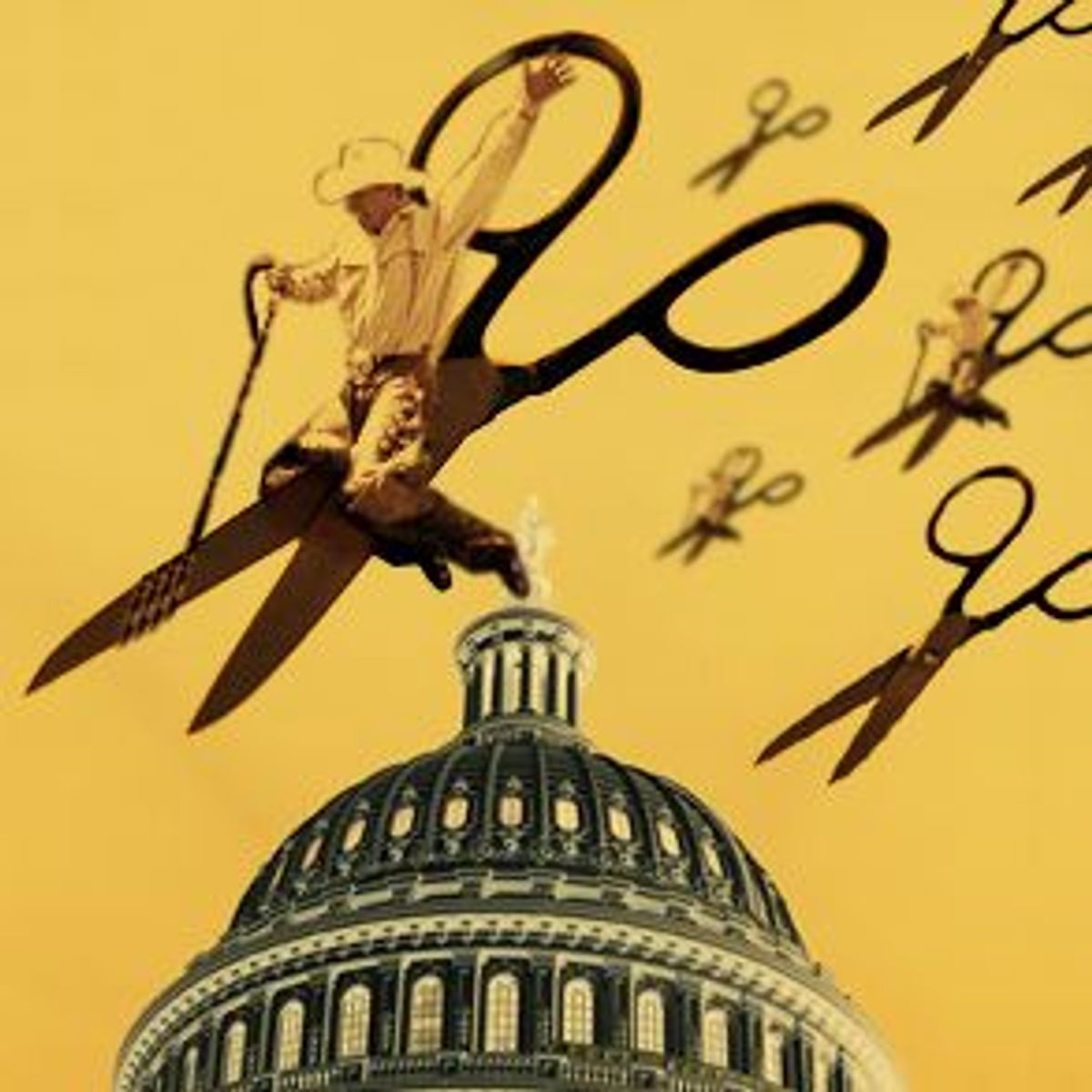 At a dinner party recently, someone told me that the Europeans had trouble dealing with President Bush during his June visit because he was such a straight talker. But straight talk is often pretense when it comes to the new president. Bush has changed his rhetoric about energy, the environment, education, China, North Korea and Russian Prime Minister Vladimir Putin, but his policies essentially remain the same.

Argue if you care to about Bush's other policies, but concerning the $1.35 trillion tax cut that is the centerpiece of his domestic program, I can assure you that the new president cannot be accused of uttering many straight words to the American people.

The tax cut is not essentially about tax cuts. It is about the kind of nation the American public wants. It's about whether we, as a country, want to use our government to improve our lives or whether we'd rather try to make it disappear, forsaking in the process a long history of government-funded social programs, including scholarships, infrastructure and Social Security. It's about whether we want a government that responds to the needs of the changing times or turns away from them.

But before we return to that issue, let me set the record straight on some of the ways the Bush administration has deceived us in supporting tax cuts.

The tax cut is premised on the expectation that the federal government will produce a few trillion dollars of surplus over the next 10 years. But the contention that the fiscal surpluses projected by the Congressional Budget Office, on which the tax cuts are based, are in any way reliable is nonsense.

The forecasting also depends on an increase in total budget expenditures that more or less only matches inflation over the next 10 years. This Congress is not likely to achieve that increase -- nor should it. The result is that in order to pay for the tax cut, the federal government will almost certainly have to run down the Social Security trust fund.

Then there is this by now well-known piece of White House chicanery: Tax cut proponents have excluded from budget calculations the amount of revenue lost in the 10th year of the 10-year program, revenue that could add an additional $300 billion or so to the tax cut.

Another formidable piece of deceitfulness -- an admittedly effective one -- has been what we might call the "overcharge" rhetoric. President Bush tells us that he is simply giving back to the American people the money that they were "overcharged." To those inclined to believe him, this no doubt sounds like straight talk. He is giving back "your money." But as Sen. Edward Kennedy, D-Mass., said recently, it may be your money, but it is our social programs.

Taxes are not a fixed price one charges the public, like retailers do for a carton of orange juice. They are calculated as a proportion of incomes that rise and fall with the fortunes of the economy. If the American people are now being "overcharged" for government services, it is because the economy is strong and their incomes are high, not because they are paying more than the value of the services they are receiving. Are Americans being undercharged when the nation runs a fiscal deficit? And will President Bush therefore raise taxes if we dip back into the red?

The Bush administration claims that all taxpayers are getting a break under the plan. Moreover, these advocates say that under any tax cut, the rich will always disproportionately benefit because they pay more in taxes.

It is not clear to me how history will judge a nation that gives a tax break to the rich just after the top 1 to 10 percent accrued more personal wealth than at any other time since the robber-baron period of the late 1800s.

Long ago, the nation decided that the rich would help the not so rich because financial privilege does confer advantage. A progressive income tax was adopted in the early 1900s. (It was first tried during the Civil War.) Now, when the rich are really rich, we seem to have forgotten the lessons of the past.

This remarkable piece of tax legislation was signed into law in June for several reasons. First, the media, though it made an issue of the inequality of benefits to be distributed through Bush's tax cuts, did not make much of one. Second, Alan Greenspan, a respected Federal Reserve chairman but not one very well known for his sensitivity to the plight of the those with lower incomes, endorsed the bill publicly.

Third, the Bush administration gave tax cuts all its attention, using tactics that were, admittedly, brilliant. It dangled a tax reduction before the American people without providing a budget, which would have told them exactly what spending programs they were cutting.

Fourth, the economy slowed down precipitously just around the time of the presidential election. This, ironically, justified the need for fiscal stimulus, even a tax cut that was widely considered to be bad for the economy in the long run. Fifth, the Senate was still Republican. Sen. Jim Jeffords became an independent only after the tax cut vote.

One more point: The "overcharge" gambit worked, and the media was not up to the challenge. Bending over backward to give new presidents the benefit of the doubt during the transition is a time-honored tradition. But this time it was even more damaging than usual.

The deepest deceit of this tax bill, however, is that it is not essentially about tax cuts at all. As I said, it is about the kind of nation one wants. So significant are the cuts that over time they will seriously impede America's ability to adopt new social programs, and they may even cut into existing programs. If the tax cut bill is kept intact and the estate tax is eliminated, about $3 trillion of revenue will be lost in the second decade of its enactment. So this tax cut is really about limiting government, not about giving people their money back.

There is a powerful myth at the bottom of this kind of thinking. We increasingly seem to believe that government is at best a necessary evil, and that the only way to control it is to limit it. We do not devote our energies any longer to making it better, devising exciting new programs that may work or utilizing its power to make American life more equitable.

Moreover, we seem to think that this is and always was the American way. In fact, America always had new economies, and new economies created new needs. In the past, government helped the nation adjust to those new needs. Today, it is withdrawing from that arena.

In the early 1800s, for example, America was an agricultural economy. Its $15 million payment to France for the Louisiana Purchase was intended to ensure the little guy access to land. But that was only part of it. The federal government reduced land prices, offered credit arrangements for purchases, forgave debt and even protected the rights of squatters time and again as the economy matured in the 1800s.

When large industrial enterprises were beginning to burgeon in the 1820s and 1830s, government made limited liability legal so that investors could put up money without fear of personal bankruptcy or debtor prison.

When the nation needed canals, the state governments, led by New York, built them.

When a commercial society clearly needed a more educated workforce, local government developed a free primary education system that was soon the envy of the world.

An information age? By the 1830s, the federal mails were a model of efficiency, traversing the land by stagecoach, steamships and finally railroads.

All these were responses to the new economies of their day. After the Civil War, the federal government subsidized the railroads. It built new research universities. It protected workers, established a progressive income tax and gave women the right to vote. After the panic of 1907, the sixth or seventh major panic over the course of a century, it implemented the Federal Reserve System.

The federal government did -- and failed to do -- a lot of controversial things as well. It could have been more aggressive about building roads and waterways in the early 1800s. It fought Native Americans in brutal wars in the name of manifest destiny. If it had acted on slavery before cotton became king, it would have avoided the nation's great tragedy. As it was, it liberated slaves at great cost, only to deprive African-Americans of civil rights for another century. It did not cope well with poverty, and still does not.

But the government kept adjusting as economies evolved. In the 1920s, it built roads to accommodate new cars and trucks. Local government built high schools for a populace that required still-better education to compete in a more sophisticated economy.

After World War II, America sent its soldiers to college, it built the highway system, it funded massive amounts of research and development, and it subsidized student loans after the USSR's Sputnik launch jarred the nation.

Now, a new economy has new needs and the men (and an occasional woman) in the White House are tone-deaf to them. Two-thirds of women with small children now work. Families work three months longer each year than they did in the past. Jobs are more insecure, as are health insurance and retirement income. Male wages just do not keep up on average, deeply wounding the esteem of a nation where one job was once enough to support a family. The nation faces generally increasing insecurity, and the government is nowhere to be found: Small wonder that citizens no longer trust it.

Is government the complete answer? No. But lack of government is not the answer, either. Unfortunately, that is what this tax cut bill is about. The nation's economy changes, and the response of this administration is not to adjust but to withdraw and deplete the nation of the tools it needs -- the tools with which it always faced the future in the past. Amazing, really, how divorced Washington is from American life. Do not think America will simply survive four more years of such backwardness. These years will take a permanent toll.