After a series of stunning political reversals, it's time for the president to sober up. 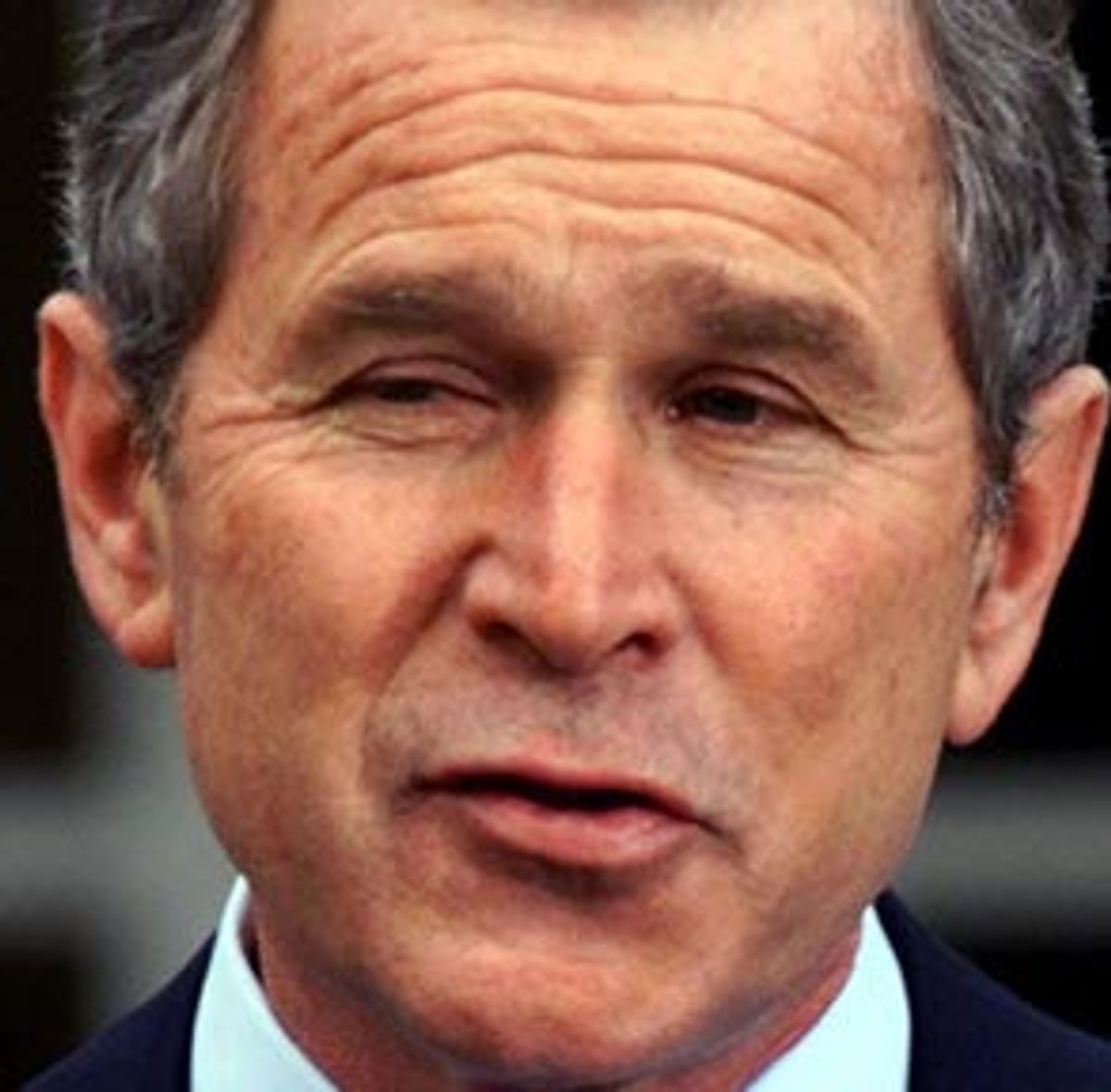 It's almost exactly 15 years since President Bush gave up drinking, after a birthday bacchanal at Colorado's tony Broadmoor resort hotel left him hung over and realizing he had a problem with alcohol. Bush got a comparable political wakeup call this week, when a sobering CBS News/New York Times poll found that the American people disagree with his stands on nearly every key issue, are losing their trust in him, and think he's in the pocket of big business and the rich. But this time around there are no indications that getting so badly hammered is making Bush come to his senses.

Indeed, the very same day the shocking poll results led most newscasts, the president was staggering ahead, appeasing his pals on the right, warning Congress he'd veto a popular, bipartisan patients rights bill because of its cost to business and HMOs, and hinting that he'd revoke Clinton administration regulations allowing stem-cell research due to pressure from anti-abortion groups -- a move opposed by Tommy Thompson, his own pro-life Health and Human Services secretary.

In fact, Thursday might have marked the low point of the young Bush administration, with bad news on multiple fronts: The House, with GOP support, voted to stop the Interior Department from leasing the Florida Gulf for oil and gas exploration, a cornerstone of the Bush energy policy, while testy Senate Democrats, including some hawks, grilled Secretary of Defense Donald Rumsfeld on the administration's planned missile defense system, which is equally central to its defense strategy.

There were lesser setbacks as well: Top Bush political strategist Karl Rove, wounded by revelations that he met with Intel execs while he still held stock in the company, had to cancel a meeting with the Pentagon about Bush's proposal to stop bombing the Puerto Rican island of Vieques -- a laudable goal, but one so out of tune with Bush policies it reeked of Rove trying to pander to the nation's growing Latino vote. California Gov. Gray Davis, whose political woes rivaled Bush's just a month ago, bested the president in Washington, as the federal energy commission imposed price caps. Meanwhile, the Wall Street Journal reported Friday -- no surprise -- that relatively moderate Cabinet members like Thompson and EPA Secretary Christine Todd Whitman are unhappy that the rightward-tilting administration has repeatedly overruled them on key issues, and might bolt their jobs.

I didn't vote for Bush, I don't trust him, but even I think he's underachieving as president. The man's enemies almost always grant him one thing: He's a political master. So why is he stumbling around in these early months like a pledge at a DKE party?

One explanation is integrity. Bush might honestly believe that HMOs and oil companies need higher profits, that stem-cell research should be stopped -- its medical benefits be damned -- and that a pricey, destabilizing, sci-fi missile shield program really should be the cornerstone of a wise defense policy. He might believe that, but if he does, he's clearly hitting the bottle again.

Another explanation is much more plausible. Bush's inner circle of right-wing ideologues isn't serving him well. The delegator-in-chief has always boasted about his reliance on the wisdom of his staff and advisors, but right now they look politically clueless. On the one side he's got his insular Texas brain trust, led by the wily Rove, who's looking more like Wile E. Coyote lately; on the other, his rigid old Beltway warriors, Rummy and Dick Cheney, and frankly, they don't look energetic enough to go mano a mano with a newly invigorated Democratic party.

Bush's woes have been like Viagra to once-impotent Senate Democrats, who just weeks ago couldn't block Bush's blatantly partisan pick for solicitor general -- Clinton smear artist Ted Olson -- or his budget-busting tax cut, but now seem primed to stymie the president on virtually every issue, from healthcare to energy to defense. Even Cheney seemed to hint, in meetings with senators yesterday, that Bush might rethink his decision to scrap the ABM treaty in response to criticism. He needs to rethink more than that if he wants to convince Americans that he's not a pawn of industry and the loony right.

Of course, he's already compromised way too much to satisfy his fire-breathing conservative friends. And yet pundits and pols on the right keep pressuring Bush to stay ideologically pure. In Friday's Wall Street Journal, Paul Gigot complains that Bush can flip-flop "faster than Dick Morris" and concludes that the president "will have to show Congress he's willing to fight for something he believes in, even at the risk of losing."

Bush and Gigot ought to curl up with the CBS/New York Times poll numbers. He's already losing the American people -- big-time. Two-thirds of Americans think Bush and Cheney are too close to oil companies to be trusted to solve the nation's energy problems; in fact, almost that many say they don't believe there is an energy crisis, but rather that the energy industry has cooked up shortages as a way to gouge consumers. That result should encourage those who doubt the electorate's capacity to think independently, but sadden those who believe they should be able to trust their president. The number of respondents who say outright they don't trust Bush climbed from 33 to 40 percent in six months.

The bad news for Bush continues. By a 2-1 margin, the poll found, Americans support protecting the environment over producing more energy. Almost three-quarters think Bush should take immediate action to stop global warming, and more than half say he should sign the Kyoto protocols. Seven in 10 back a patients bill of rights, even if healthcare costs rise. A whopping 57 percent believe his policies favor the rich, compared with 27 percent who think he treats all groups equally. "On a host of issues," the New York Times observed, "the respondents' views are closer to those espoused by Democrats than those of Mr. Bush and other Republicans."

Of course these troubles come early in Bush's term, with plenty of time for him to correct the electorate's negative impressions. And even his critics think he can. "He's surrounded by advisors, but he has the final say," an Ohio contractor skeptical of Bush told the Times. "I'm hopeful that somewhere down the line he will be different."

There's reason for hope. Bush's political instincts are unmatched, and they could lead him back to the center, where most of the nation resides. But if Thursday was any indication, he's dulling his instincts with too many triple shots of Old Grand-Dad -- the 86 proof reactionary ideology of old white men -- and he's resisting the evidence he needs to sober up. If he doesn't, he'll wind up with the mother of all hangovers, but sadly, so will the nation.

As White House advisor Karl Rove struggles to avoid any more scandal surrounding his ownership of Intel stock, the president's recent financial disclosure forms show that the computer chip-maker also had some investors in the first family: Barbara and Jenna Bush, whose trust funds each held between $1,000 and $15,000 worth of Intel stock.

On the May 15, 2001 financial disclosure statement, Bush reveals that Barbara's and Jenna's trusts each held between $1,000 and $15,000 worth of Intel stock, along with similarly sized chunks of stock from tech interests like Microsoft, Lucent and Cisco Systems, that were tucked into their nest eggs during last year. The White House did not respond to Salon's request for information about the investment.

Nobody, of course, is suggesting that either of the young women took a meeting with Intel's chief honchos -- like Rove did. But it was Bush, after all, who closed his first executive order on Jan. 20 with a warning to his staff to "avoid any actions creating the appearance that they are violating applicable law or the ethical standards in applicable regulations." That didn't prevent Rove's $100,000 Intel connection, or stop Treasury Secretary Paul O'Neill from keeping a white-knuckle grip on his Alcoa stock until it earned him unflattering attention.

The first daughters might not be in a position to boost their stock, but their father certainly is. Maybe, if Bush is the family man we're always told he is, we should be more concerned with his family's investments than we are with Karl Rove's.

It's Grecian to me: Bush bashing in the Great White North

While conservative critics were hammering the European press for their less-than-kind coverage of Bush's trip overseas -- National Review contributing editor Michael Novak called the reports the result of "incorrigibly social democratic limitations of the European mind" -- a very nasty and largely unnoticed piece blasting the president was coming from much closer to home.

This week, Canada's Ottawa Citizen ran an anti-Bush column smugly titled, "Bush would never be elected here," that starts out slamming the president, spreads its wrath to include American politicians in general, and obliquely insults just about every voter in the United States. The piece, authored by Susan Riley, goes for the jugular from the opening line. "Does anyone know for sure that George W. Bush has forsaken drugs?" she asks rhetorically. "He sounds stoned half the time."

It takes Riley another paragraph, in which she compares Bush to a plastic action figure, before she touches his European tour. When she does, Riley won't even give Bush credit for exceeding low expectations or charming his hosts with self-effacing humor and chummy nicknames. She instead labels the trip a complete failure and a disappointment "[t]o anyone looking for signs of intelligent life in the new American presidency." Bush's "sheen of affability" was a thin disguise for his display of "an intense patriotism that verges on chauvinism" and his "condescending interest in anyone unlucky enough not to be American."

But, in Riley's estimation, nothing better could be expected of an American political landscape, "littered with robo-pols like Bush: identical, silver-haired senators; tall wealthy corporate captains with perfect teeth and trophy wives; interchangeable wafflers, preachers and glad-handers of all political persuasions, all smartly dressed and dauntingly fit." (I guess she's never seen Cheney.)

Riley then goes on to praise Ralph Klein, Joe Clark and a few other "rumpled, unfashionable" and presumably earnest Canadian leaders who no American -- including the president -- has probably ever heard of. According to Riley, they're all kinder, better educated and more hard-working than any of the shallow, aging Ken dolls that we elect down here. In the Canadian political paradise, prepackaged pols like Bush get eaten alive. "The smoother they sound -- the more scripted, primed and Bush-like -- the less we trust them," Riley writes, concluding, "Good for us."