As the owner of Jennifer
Lopezsucks.com, Microsoft
sucks.com and about 600 similar domains, Dan Parisi is the master of all things sucky. So far the courts are respecting his empire. 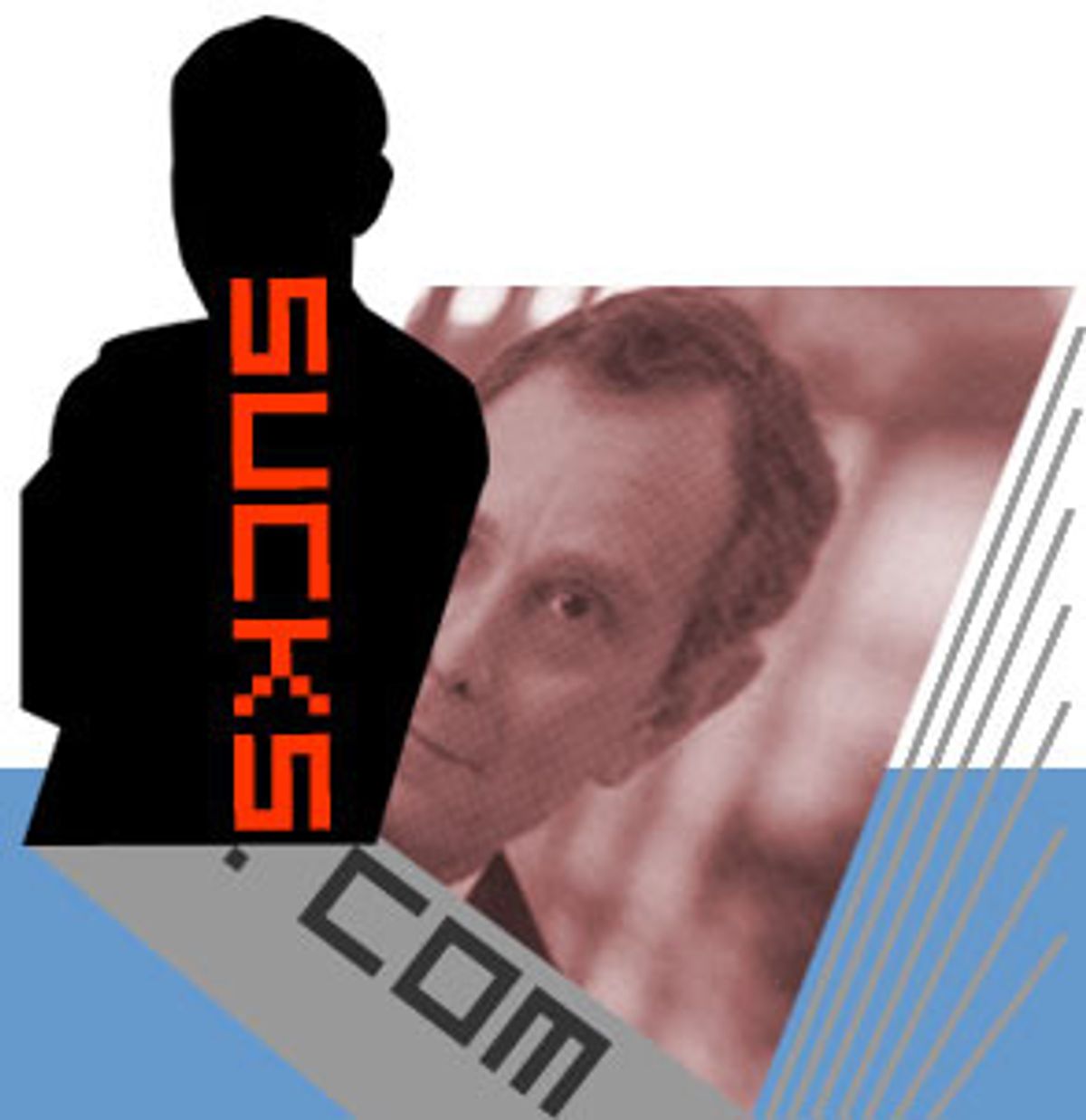 Michael Bloomberg couldn't stop Dan Parisi. Lockheed Martin couldn't either, and hundreds of other companies haven't even tried -- yet, that is.

Parisi, working from a small office in Secaucus, N.J., is playing an increasingly important role in the ongoing debate over Web addresses. On Tuesday he won the right to the domain name MichaelBloombergsucks.com, which he's owned since 1999, despite the efforts of the New York mayoral hopeful to stop him. ICANN -- the Internet Corporation for Assigned Names and Numbers -- the international nonprofit corporation that usually oversees such disputes, was also helpless.

If ICANN is a ship lost in the stormy seas of domain registration, Parisi is the shark circling below. A sharp critic of the much maligned organization, Parisi only surfaces when one of the domains he owns, like MichaelBloombergsucks.com, comes under fire. Meanwhile, while others debate the merits of certain suffixes, and wring their hands over who would own what URL, Parisi simply collects them.

Type in a Parisi-owned sucks address and you'll arrive at Sucks.com, the clearinghouse site where Parisi has built a veritable super-picket line with hundreds of complaint forums to join. Bash Bush in the Government Sucks forum, Netscape in the Netscape Sucks forum, Jennifer Lopez in the Jennifer Lopez Sucks forum, the entire nation of Ukraine in the Ukraine Sucks forum and on and on. Even companies or organizations whose sucks sites Parisi doesn't own get dissed here, in forums like RIAA Sucks or McDonald's Sucks.

Parisi spoke to Salon from his New Jersey office, where he reveled, briefly, in the Bloombergsucks.com victory and plotted a name change for Sucks.com.

So you won the rights to the MichaelBloombergsucks.com site.

The site doesn't really make much money, so if you win, it's good for other people who use the site, but it doesn't really do anything for us, you know.

I didn't think [the court proceeding] would be as nasty as it was. This was actually a really nasty case. If you run a site like Sucks.com, there's obviously going to be stupid things posted there, and they tried to sue [on the grounds that] those things being posted on the site as showing that we're tarnishing them. There's like 100,000 posts on the [MichaelBloombergsucks.com] Web site, so one-tenth of 1 percent of them -- you've got some idiots posting them.

But these ICANN people who rule these cases are screwy anyway. They rule any way they want.

One thing about us being involved in these sucks things is that at least we've won two cases. There's been like 20 of these sucks cases that have been in front of ICANN and almost everyone else has lost. We won this one and we won the one against Lockheed [for Lockheedsucks.com]. The third is WalMartsucks.com -- he won.

Why do you think you won this one?

Because obviously we're spending the money and, you know, we have a free speech site up there. But what they're basically doing at ICANN is they're saying, "OK, someone has a trademark for something; if you have any variation of it, we don't care if anybody thinks it's affiliated with it or not, we call it an infringement."

We said, "This is a free speech site. We didn't take it to infringe against anybody, because, obviously, we have 700 sucks names. It's not a way to go after Michael Bloomberg." We said, "How did we know two years ago, when we registered the name, that this guy was going to run for mayor? What, we have a crystal ball or something?" 'Cause that was their argument, you know, that we were trying to sabotage his campaign.

How much did you spend to keep MichaelBloombergsucks.com?

This case cost us $5,000. And thinking about spending $5,000 on a name that doesn't bring you any money, you know, you've got to think about that. At the beginning, I didn't want to spend it, but then I said, "Well, I gotta do something about it."

These ICANN people let anyone go after anyone for anything. Someone can file against you for anything, and if the board people feel like giving it to them, they can.

Did you ever meet Michael Bloomberg?

No, I've never met him. The only communication I've had is with the attorneys. I think he has three or four of them working on it.

In general, do you get a lot of threatening mail from companies whose Sucks.com sites you own?

Some companies like the sites. Intel has gone on the record saying that they like the site; they have no problem with it. And I have a letter from American Express saying that they thought it was a good site too. They thought it was fair use. And we have these other people writing letters always trying to start trouble, but no one's really going to take this to a federal court, 'cause I don't see how they'd win. So they just send letters to you to try to scare you.

What kind of response have you had from Microsoft?

None. Nothing at all.

What are your plans for the Sucks.com site?

I'm debating what kind of features I could add. Like I'm debating adding a way that people could write letters directly to the company, maybe e-mail congressmen, senators, stuff like that. The problem is the money aspect, you know? I gotta use money from our business to pay for this. And that's a problem, especially given the way the dot-coms are going right now.

The only two things that are making money right now are the adult sites and the gambling sites. I'm looking into that myself, gambling, because especially with Nevada in the process of legalizing it, I think that [online gambling] is going to be very big.

How did you first get into the Sucks.com business?

I went to one of the first ICANN meetings -- this was about two years ago when they met in Boston. And I just had a bad feeling when I saw those people. I just had a bad feeling that this was gonna be a run around the Constitution, which is what I think it was made to be. So I started taking these names. Then one thing led to another. You know, you spend money on these things, one at a time, and then after a while you realize you spent a lot of money on this. I never expected to spend $100,000 on this, which is what I ended up spending.

I actually had a site called Infolook -- I wanted to set up, uh, what's that, a portal site. [I had] Infolook and Megasearch and none of them ever made any money. Unless you have venture capital funding, whatever site you set up, it's never gonna go anywhere. I realized that the hard way.

Then I thought about the WhiteHouse.com site one day. There's a diner right by my house called the White House Diner which I used to drive by every day. So I called the guy who owned the domain, and we worked out a price and I bought it.

WhiteHouse.com was supposed to be a free speech site, that was my original idea. And what happened is nobody went to the Web site and I didn't make any money with it. Then I read this article in USA Today about how adult sites were making all this money. So I went to my attorney and I said, "You know, I gotta make some money. Can I do this?" And he said, "I don't see a problem with it."

We lost money for the first seven, eight months and then it started paying for itself and making money.

Do you have a favorite domain?

I always like the Microsoftsucks.com one. We started that when the government was cracking down on them originally. One of the biggest ones is Chinasucks. Chinasucks.com is very big right now.

But the biggest one we have right now is actually Governmentsucks.com.

There's a lot of good posts, but we have a lot of idiots. So I started to restrict words. I took swear words out of there; I took out phone numbers. I took the N word out, because they were saying we were racist. There's not that many; it's like 75 words. I didn't want to do it; there's a lot of people mad on our boards about this, but what am I gonna do? If these people are going to come after us, and use these posts against us -- you can't have the whole board shut down just for 1 percent of the people.

I read it. They're all mad about the censor. They say different things, like I have the I.Q. of an 8-year-old or something. Eh, what are you gonna do? [Laughs]