AIDS conclave off to rocky start 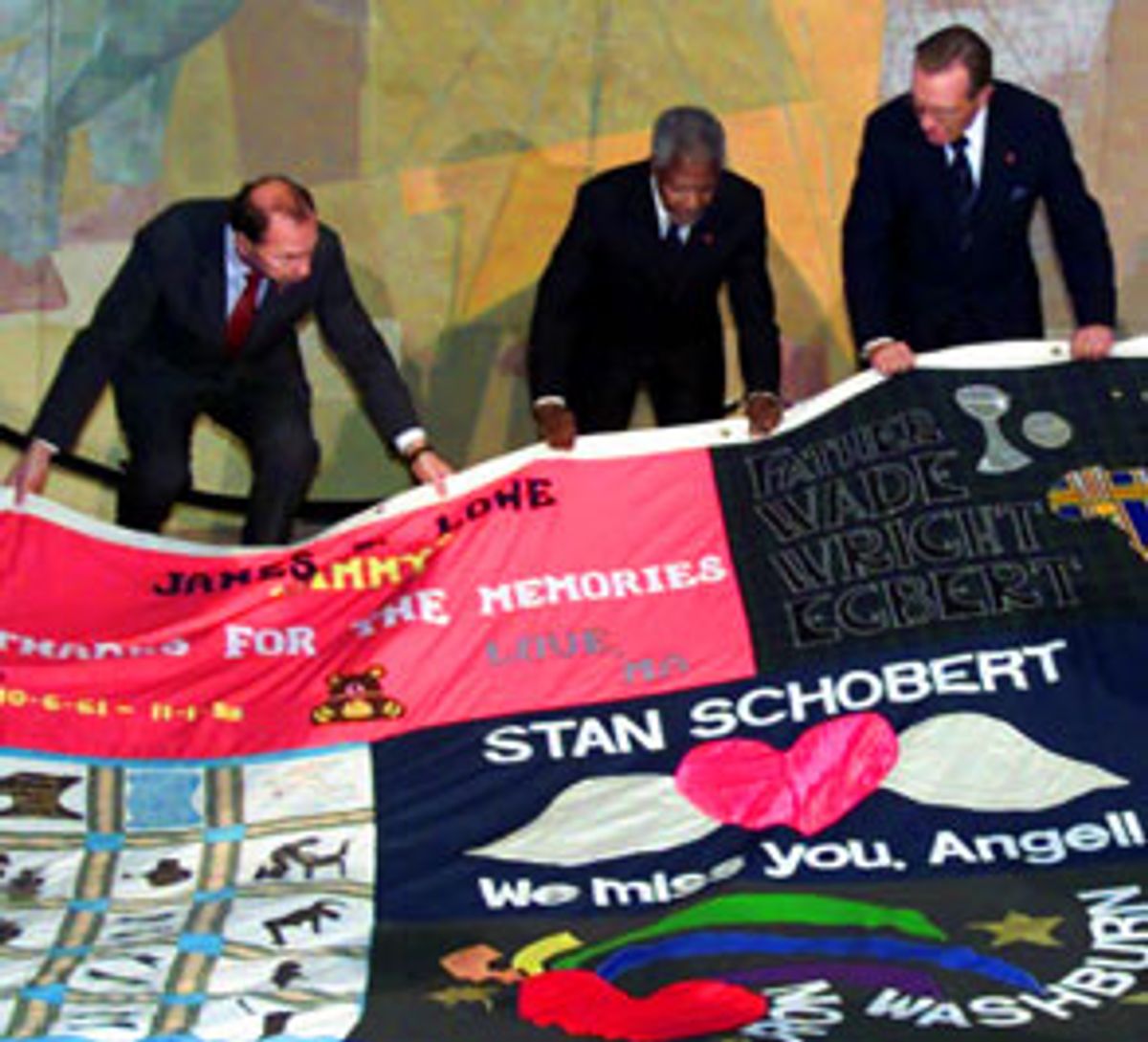 A special meeting on the international AIDS crisis got off to a rocky start Monday, when some member states tried to block the inclusion of an international gay rights speaker on the agenda.

That dispute was resolved by late afternoon, but members continued to debate whether a draft declaration pledging to halt the spread of HIV and AIDS -- and offering support for the $7 billion to $10 billion superfund proposed by Secretary-General Kofi Annan -- should specifically cite homosexuals, sex workers or intravenous drug users as people vulnerable to the disease. Conservative Islamic countries, led by Egypt, sought more generic terms that they said would let them support the effort without betraying their religious principles.

The spat over the gay-rights group's inclusion, as well as over semantics, underscores the difficulty the United Nations faces in mounting a unified international response to the worldwide AIDS crises. In North America and Europe, a high percentage of HIV/AIDS cases have been concentrated among those in the gay community, intravenous drug-using populations and sex workers; in Africa, the population most devastated by the illness has been heterosexual. Meanwhile, frank discussion of homosexuality, which is forbidden under Islam, is difficult if not impossible for the governments of more than a few member nations, as is talk of drug use or prostitution.

Early Monday, the United Nations suddenly withdrew its invitation to Karyn Kaplan of the International Gay and Lesbian Human Rights Commission (IGLHRC). Kaplan had been scheduled to participate in a human rights roundtable on Tuesday morning -- one of four high-profile discussions that had been scheduled with participation by nongovernmental organizations. The list of attendees drafted had to be approved by country delegations, and several Islamic countries, reportedly led by Egypt, refused to allow Kaplan's group to participate.

Late in the day, Kaplan was reinvited after a sharp debate, but members continued to wrangle over the wording of the joint declaration. No agreement was reached by the end of the day.

The United States is reportedly involved in trying to broker a compromise between Islamic nations and more liberal European states on gay issues. On Monday U.S. Secretary of State Colin Powell addressed the delegates, and suggested the U.S. may offer more to the U.N.'s AIDS superfund than the initial $200 million it has pledged, hinting that the funds are "only the beginning." Powell also said that the U.S. has already provided more than $1.6 billion in AIDS relief funds to developing nations. He pointed out that President Bush has pledged to double AIDS relief funds in his next budget, bringing the annual expenditure to $480 million.

The Canadian and Norwegian delegates have taken the lead in negotiating to include specific references to gays, sex workers and drug users in the declaration, as well as in the successful attempt to restore IGLHRC to the roster of speakers, according to a source familiar with the negotiations.

In a speech before the General Assembly, Norwegian Minister of International Development Anne Kristin Sydnes criticized the silence of many nations about the spread of the disease, noting that effective prevention requires the breaking of societal taboos. "It will take putting an end to abuse, discrimination and stigma," she told the assembly. "We must offer partnership, not exclusion ... Partnership with people infected and affected by HIV/AIDS. Innovative ways of working with such vulnerable groups as men who have sex with men, injecting drug users, sex workers. Openness and cooperation promotes responsible behavior. Stigmatization increases vulnerability."

Reached by phone, IGLHRC project director Scott Long said he was told Islamic member nations were uncomfortable having a gay and lesbian organization participating in Tuesday's roundtable meeting in any official capacity. Long said delegates for Canada, Norway and European Union member states had also been battling Egypt and Islamic nations over language.

"Everyone knows that HIV/AIDS is not just a gay disease," Long said. "But gays faced the brunt of it first and have a wealth of experience on how to respond to it effectively. What the U.N. is now saying, beyond the moral implications, is that our opinions are not worthwhile. They're ignoring a reservoir of wisdom and truth about AIDS," he said.

On the other hand, this is one of the first occasions in history where virtually every nation in the world has been asked to discuss in an open forum tough subjects that are still more taboo in some countries than others. It's easy for the Europeans, especially Scandinavians (where civil unions between gays are legally observed) to promote language that is tolerant toward or inclusive of homosexuality; but it's a different story for countries where both are considered moral corruption, perversity and sometimes are even punishable by the death penalty. And even in this country, some minority groups have argued that their communities' concerns haven't adequately shaped efforts to combat AIDS.

Still, the gap in international values on gay rights issues is one reason organizations like IGLHRC want a place at the table. Plus, gay organizations bring with them 20 years of dealing with the AIDS crisis, prevention and treatment in Western countries that could be useful to leaders of developing nations as they grapple with the staggering problem.

In a separate development Monday, the United States announced it would drop its patent dispute with the Brazilian government at the World Trade Organization. The U.S. was disputing a local-producer provision of Brazilian patent law the country had used to issue licenses for the local generic manufacture of anti-retroviral drugs. The inexpensive generic versions of those drugs, which sell for as much as $15,000 a year in Western markets, are being used there to treat 100,000 HIV-positive Brazilians. Powell, speaking at a press conference following his remarks at the U.N. in New York Monday, said the timing of the agreement was a "coincidence."

Under the agreement, Brazil must inform the United States of its intention to issue any compulsory licenses at least 10 days in advance. Those terms drew criticism from Jamie Love of Washington's Consumer Project on Technology, a major proponent of compulsory licensing in developing nations as a means of dealing with the health crisis. "The U.S. Trade Representative should clarify the grounds under which it will ask the Brazil government to consult prior to issuing a compulsory license," he wrote in an e-mail. "More generally, the U.S. government should not insist on supervising a nation's day-to-day administration of its patent laws."

Throughout the conflict, which escalated earlier this year, Brazilians have been unflinching in what ultimately amounted to a game of intellectual-property chicken. Brazilian President Fernando Henrique Cardoso recently stated: "We do not agree that the defense of intellectual property be carried out at the expense of the health and welfare of the people. We are not here to challenge and break patents thoughtlessly. But we are here to say that when it is necessary for the health of our people that we will not hesitate (to do so)."