They're here, they're mad, get used to it

Lured by dreams of hobnobbing with their Florida recount heroes, Free Republic faithful have to make do with one another. 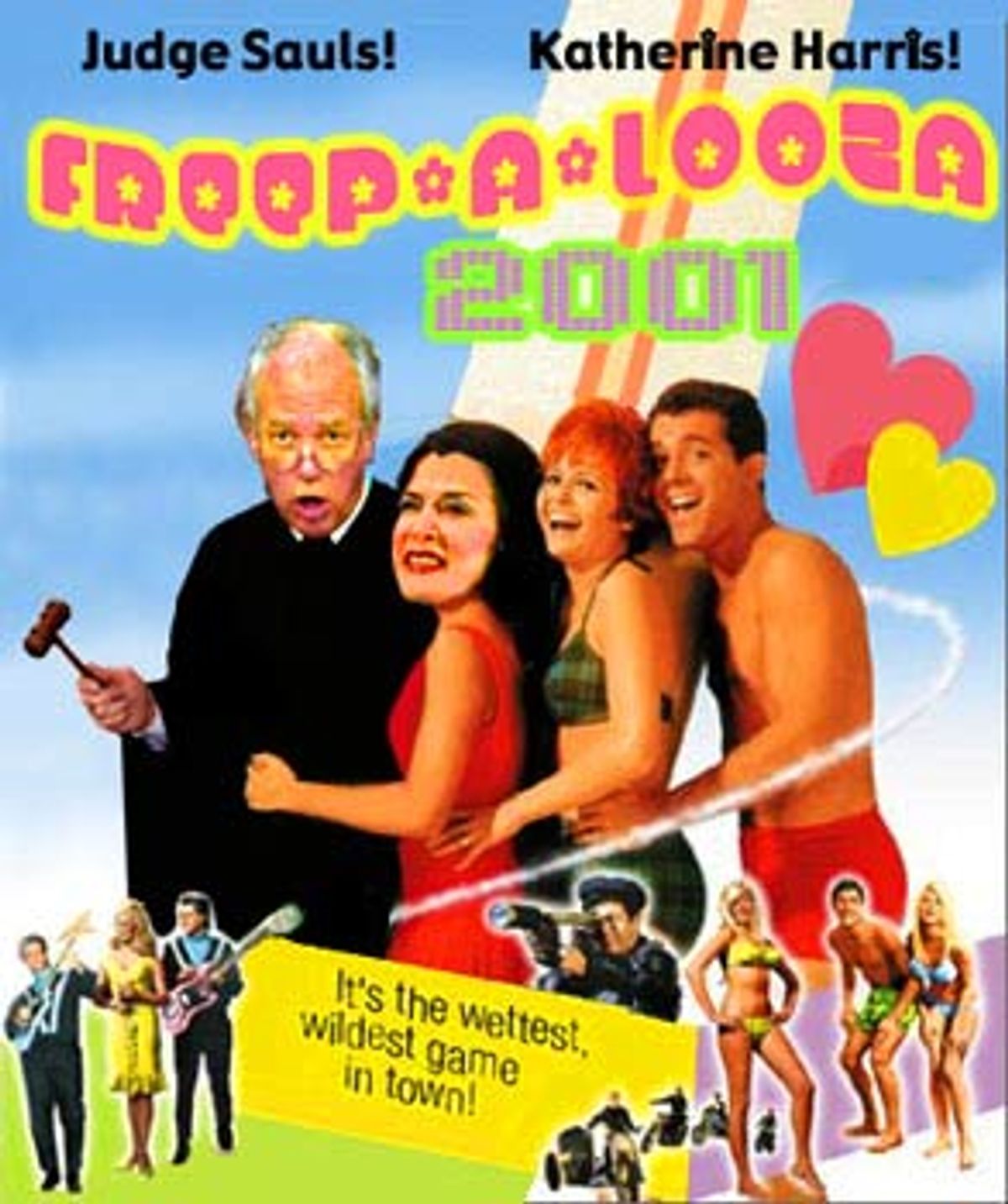 I make it to the Free Republic conference Saturday just in time for the "Round Table Discussion on Media Bias," held in a conference room that, despite its panoramic view of the Atlantic Ocean, is a little dark and dank, the air stale from a good number of cigarettes.

When I'm introduced to the group of about 25 members sitting at the tables, organized in a square, I'm mostly met with glares, some steely, others surprised. It's not just that Freepers hate Salon. (But, boy, do they hate Salon.) They also hate, with the exception of Fox News, the rest of the media. "Feminized men and airhead women," clucks Janice Matchett, a retired widow from Florida. The room suddenly seems a little darker. I'm instructed by someone to turn to Page 15 in a handy, pocket-size version of the Declaration of Independence (provided by the libertarian Cato Institute) to peruse the list of signatories.

"See, even a Clymer signed it," she says, and the group breaks into laughter. The signer was a George Clymer; the reference, of course, was to venerable New York Times reporter Adam Clymer, slurred by George W. Bush last summer as a "major league asshole." Now Clymer has become shorthand on the Free Republic site (which has rules against profanity) for "asshole" and "journalist," since to Freepers they're synonymous.

A very large man sitting next to me launches into a tangent on how the media is generally biased because reporters are generally dumb. Journalism schools, he points out, are where all the kids who couldn't make it in business school go. "They're just not very smart," he says angrily.

I didn't expect to be the only media person at this, the second annual Southeastern Rally, thrown by the South Carolina chapter of the Free Republic Network, the nascent organizing group that has spun off from no-holds-barred conservative Web site FreeRepublic.com. Expectations were high. Last year was a high-profile success, thanks to Linda Tripp's first post-impeachment hearing appearance, but this weekend's gathering seemed ready to top it: Florida Secretary of State Katherine Harris and Circuit Judge Sanders Sauls, who stopped the Florida recount requested by Vice President Al Gore before it was temporarily jump-started again by the Florida Supreme Court, planned to attend the convention banquet to receive awards.

Or so they thought. Harris waffled last week, then blamed "scheduling conflicts" before pulling out. Sauls pulled out at the last moment, after getting a shellacking from Florida newspapers for considering appearing at such a partisan event. The cancellations were due to "outside influence," Julie Nicholson, the event organizer and South Carolina chapter head, said gloomily.

Both may have decided that Freepers were a little hot even for their firebrand images. Freepers are angry -- boy are they mad -- and they don't just like to argue online, they like to get in people's faces. This is the only annual gathering for the Freeps (as they call themselves) and, aside from the hundreds of protests they throw every year, the only chance to meet one another.

The people who traveled and paid about $220 a night to attend this conference at the plush, gated island of Seabrook, south of Charleston, S.C., are true believers. Many of them regularly attend the protests organized in the site's chat rooms. Jo-Ann Melhuish, a friendly older woman from New Jersey, says she frequently drove down to D.C. last year to pull shifts with other Freepers in front of the White House in a daily protest the group kept alive throughout the Clinton years. Melhuish mentions, with clear pride, having once met Juanita Broaddrick at a Freeper event in Arkansas.

It's a group of conservatives who have largely self-organized online, fulfilling one of the great promises of the Internet, and there's a comfort level among them, though some are meeting for the first time, purely because they identify one another as political comrades. Journalists constantly use their forums as quasi-focus groups, and often look to them for outrageous postings; a UPI story last month found one poster who sympathized with Timothy McVeigh, and another who called him a "modern-day Paul Revere."

The group has also expressed a level of vitriol toward Democrats, particularly the Clintons (including occasional death threats), that has normally reasonable voices on the left wishing they could shut the group up. Legal scholar Cass Sunstein uses the Free Republic as an example of what his new book, "Republic.com," describes as "group polarization," where people segregate themselves so effectively online with other like-minded thinkers that they create an echo chamber where the group's worst and most malevolent opinions get reinforced and strengthened. "We might want to consider," Sunstein startlingly told the Times recently, "the possibility of ways of requiring or encouraging sites to link to opposing viewpoints."

So who are these hyperidentified Freepers, and are they dangerous? Only about 50 people are at the conference, and a majority of them appear to be over age 50, with an impressive contingent of seniors as well. But there is also Elizabeth Cornette, 25, a grad student at the University of Kentucky, who says she's a daily Free Republic chatter. She says she identified herself as a conservative in 1981 (which would put her at around age 5), when Ronald Reagan was shot.

"I was sitting on a brown velour couch, wearing black watch, plaid walking shorts and navy blue kneesocks," she says. "I can remember it clearly. He was my hero." But for a pretty blond "Bushie" in her 20s, she says, being conservative can be lonely. "It's so hip to be liberal." For her, Free Republic is a refuge.

Members of the group resent the way they've sometimes been ridiculed and caricatured by the media -- "like a bunch of sinister crazy people," says Gloria Laird, a senior citizen from Florida.

While most of them, like Laird, appear to be nice, funny, friendly people, they do make it easy to poke fun.

Without Florida's Harris or Sauls, the best event organizer Nicholson could do for a political heavyweight was South Carolina's secretary of state, a silver-maned, silver-tongued gubernatorial hopeful named Jim Miles, who addressed the faux-lei-bedecked audience at a Polynesian-theme banquet. Miles, however, didn't have time to do anything but give what had to be his foolproof Rotary cheerleading speech. He talked up the state's natural resources ("We have the world's No. 1 striper fish lake!"), its people ("We've got the strongest faith-based community in America!"), their hearts ("Per capita, [we have] the fifth-most generous people in America!), even the interstate highways ("We've got five interstate highways!).

For the most part, Miles caused banquet attendees to light up their cigarettes and stare lazily at the bird of paradise centerpieces.

That set the stage for Van Jenerette, a political science professor from Southeastern Community College who has a combover that must be seen to be believed, streaking from the corner of his scalp behind his left ear, diagonally across the top of his head in a mass of thick white strips, to just above his right temple. Jenerette knew his listeners, and he gave them what they wanted.

Part thundering preacher, part nerdy professor, he emphasized the need not to "prostitute our rights" to a government greedy for control over individuals, warning that it is "up to man to define man, and the rights of man are defined by man. Free men on this earth who leave it only to man's opinion will become an endangered species. And most free men in this world today are endangered." He repeatedly cautioned the audience to follow its "moral mandate" to keep American society free.

The crowd gave him a standing ovation. Then the banquet seemed ready to dwindle to a close when Nicholson paid tribute to various attendees, ultimately singling out Bob Johnson, from Los Angeles, for spearheading the Free Republic Network. As her praise reached its climax and the evening reached its conclusion, she unfurled his gift: a Confederate flag. Another standing ovation.

Afterward, as the part of the party moved to an adjacent bar, and Matchett and Gloria Laird danced to Ricky Martin tunes, Johnson spoke of his plans for the Free Republic Network, which he sees as a "support service" for conservative activists. The network already has 60 chapters, affiliated by state or special-interest group.

The network will soon be incorporated and Johnson will be named its president, for as long as it takes to successfully apply as a nonprofit. Says Robinson, "It's all volunteer here, except for Jim" (referring to Jim Robinson, the founder of Free Republic, who recently took a salary with the company -- which gets all its money from donations to drives such as the current NPR-style Freepathon).

Johnson has reason to believe his network could tap into a larger group of disenfranchised. Various new groups have already sprung out of the Free Republic's forums, including the anti-handgun control Second Amendment Sisters, who challenged the Million Mom March for media attention (if not sheer numbers) last year, and Arizona's "Recall John McCain" campaign, organized by a Freeper named Marcia Regan who is busily gathering signatures, and a fair share of press, in an effort to recall the Republican senator and Bush antagonist for not adequately representing the conservatives who voted for him. It's a next-to-impossible task (more than 300,000 signatures are needed, and McCain still wouldn't be legally required to step down), but as a P.R. move it makes sense.

And there were, according to Johnson, 700 rallies in 250 cities last fall protesting the Gore campaign's Florida recount efforts. Those rallies, Johnson contends, were organized by Free Republic, though plenty of party operatives were quick to take credit. "There were some who were literally going to the Bush campaign saying they did it. Bullshit, we did it."

If the success of Fox News rode on the back of the growing sense during the presidential campaign that the media was largely anti-conservative -- which intensified dramatically during the Florida recount -- Free Republic is riding the same red-state boom.

The question -- as it is with Fox -- is whether Free Republic will be able to sustain its radical underdog appeal when a Republican is president. Free Republic now has 70,000 registered users, according to Johnson, and he insists it would have more if it didn't purge its rolls every six months to save maintenance on its servers. "I think there's probably more like 200,000," he says.

But he admits that the numbers swelled during campaign 2000. Does Johnson think there might be an ebb now that their guy is in office, and Fox is challenging CNN for cable news domination?

"No, people will always be angry," he says. "There's no shortage of things that people will get angry about."