The HBO way of death

In the new series "Six Feet Under," the grim reaper could use a little more sting. 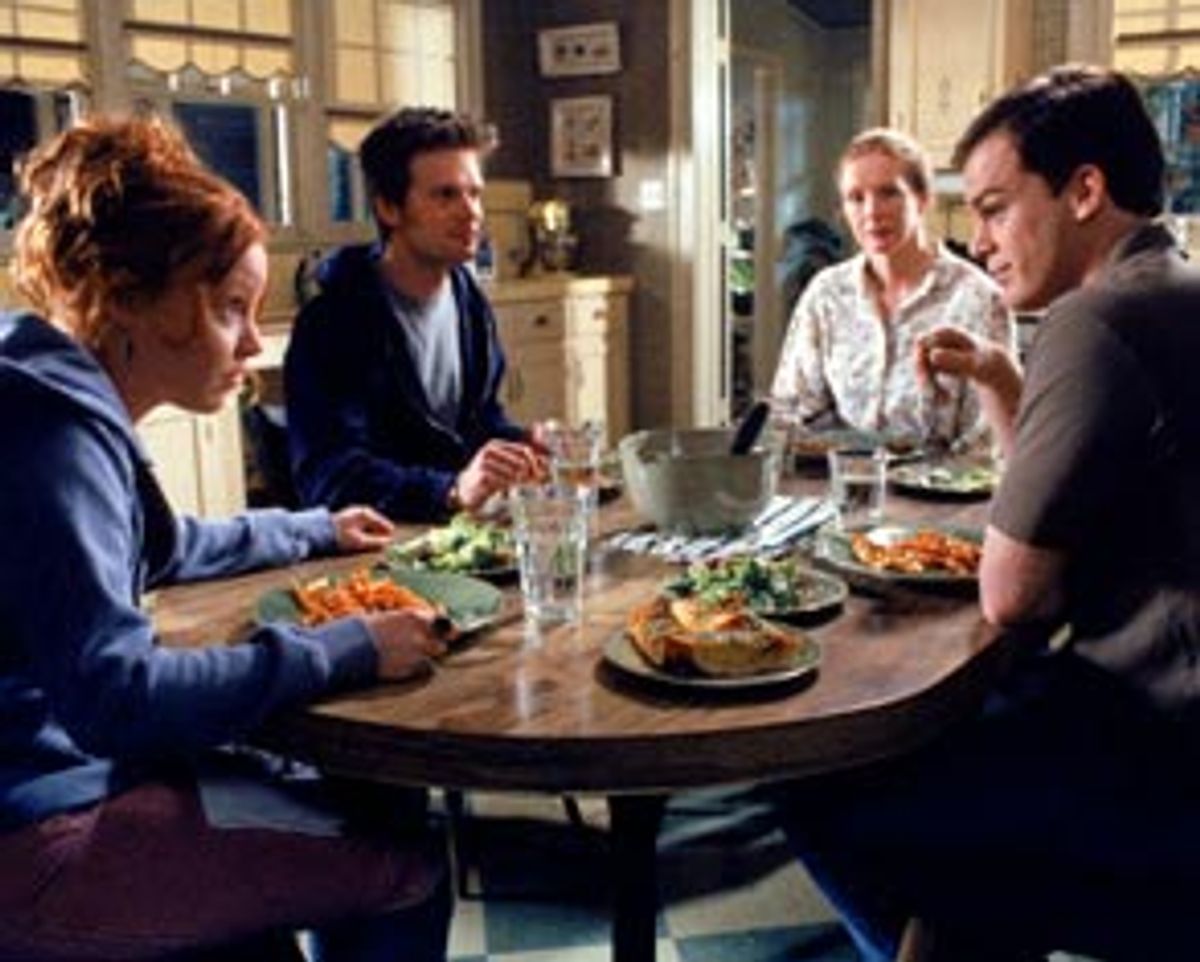 Death -- it's a riot. Isn't it? On HBO's new comedy series, "Six Feet Under," creator Alan Ball, who wrote "America Beauty" and won an Oscar for his trouble, uses a funeral home and the American way of death to look at family and relationship mores in the early 21st century. But four episodes in, exactly what Ball is trying to do remains opaque.

The show is fun, black and intermittently engrossing. But it's difficult not to feel, as we watch, that we're being asked to participate in an experiment that hasn't quite jelled. The resulting failure is an interesting test of HBO's prime marketing challenge, which is to create must-see TV on a pay-TV channel. There are jackpots available, as proved by the success of "The Sopranos," which has become a cultural touchstone and a huge new audience draw for the network. But "Six Feet Under" lacks the obvious sex appeal of "Sex and the City" or the niche audience of something like "Arliss," the Robert Wuhl show about a sports agent. These shows indicate that the two things needed to build a pay-TV audience are quality and audaciousness. But "Six Feet Under" lacks both.

The show runs for an hour each Sunday, originally in the "Sopranos" time slot. (For the first few weeks, the network tied it to "Sex and the City" and "Arliss," but that plan was a bust; on most cable services, "Sex and the City" now shows at 9 p.m. with "Six Feet Under" airing immediately after it at 9:30 p.m. If you want to catch up, the network is showing the first four episodes in order this Sunday.) The premiere is set on Christmas Eve day. We see Nathaniel Fisher, owner of the Fisher and Sons Funeral Home, cruise down the street in his corporate hearse and then get sent to his maker when an oncoming bus crushes the car. (The father, who haunts his family members in the first few episodes, is played with sarcastic aplomb by character actor Richard Jenkins.)

The death does what it's supposed to do -- set the insecurities and emotional dysfunctionalities of the remaining family into sharp relief. It turns out that his frowning, dowdy wife, Ruth (Frances Conroy), has been having an affair. One of his three kids, David (Michael C. Hall), is the good son, all prim and proper and ready to comfort his bereaved customers as he sells them an elaborate funeral.

Nate Jr. (Peter Krause), the eldest son, left the family years ago, and has been spending the interim working at a food co-op in Seattle and sleeping around. Coming home on Christmas Eve, he has an airport storeroom quickie with Brenda (Rachel Griffiths, an Oscar nominee for her role as Hilary du Pré in "Hilary and Jackie"), whom he's met on the airplane. He gets a cellphone call with the bad news about his dad while he's rearranging his clothes.

The final kid is Claire, played by the cherubic, acid Lauren Ambrose. She seems to spend her time getting into low-level trouble at school and being slightly freaked out by her home surroundings.

Each episode begins with a gruesome death: an overextended con man cracks his head open in a swimming pool; a baker gets pureed in a massive blender accident; a Latino gang member is offed when he gets caught on the wrong block. The resulting bit of business for Fisher and Sons is the setting against which other, longer story lines play out. David, it turns out, is gay. He's got a boyfriend who's a cop and out of the closet, too, though David isn't quite. With news of the father's death, a representative for a funeral-home conglomerate wants to buy the family out; when, after some discussion, they turn him down, he gets belligerent and promises to put them out of business. Nate Jr. decides he wants to rejoin the family, to David's irritation; he consistently fumbles the jobs he takes on behalf of the mortuary, all the while pursuing an extravagant sex life with Brenda.

Claire's getting into trouble, too -- she sleeps with a guy at school, who induces her to suck on his toes. He tells his friends and Claire's immediately branded a pervert. (In retaliation, she steals the foot of the poor chopped-up baker and leaves it in his locker.)

It's difficult to see where Ball is going with all of this. Although mordant and dark, the show never manages to become truly daring. Since to this family, death is a part of daily life, their attitudes toward the people they deal with are a bit detached, but never enough to be cruel. David pitches his coffins calmly, not greedily, and his salesmanship is always carefully contextualized as part of the operation's struggle for survival. While the show lets us know that the $9,000 coffins the family purveys carry a 100 percent markup, "Six Feet Under" doesn't pretend to be a muckraking, Jessica Mitford-like exposé. We're supposed to take the Fishers' business on its own terms.

The family members' relationship to their father's death turns out to be slightly detached as well. The father's specter materializes in the home for the first couple of episodes, but he now seems to have dropped out of sight for good. The family doesn't talk much about him, but the show isn't nuanced enough for viewers to understand whether it's part of the family's emotional clotting or if it just means he's gone for good.

The mother breaks off her affair, but it's not clear why. Where immediately after the father's death she was at pains to remove herself from the business, now she's back, for reasons never made clear.

In the "The Sopranos," creator David Chase's vision is organic -- virtually everything that happens can be seen through the twin prisms of the two families James Gandolfini oversees. "Six Feet Under" doesn't have that sort of focus. Nate Jr. seems to have a wild sex drive: He and Brenda couple in the storeroom, then in a vacant house across the street. Finally, and, most outrageously, his mother walks in while he's giving head to Brenda in the funeral-home sitting room! But there's no suggestion that he might have a problem. Brenda seems a little out of control as well. Somehow or somewhere, she ended up with a tattoo on her butt that says "Nathaniel": It's not clear whether she ran out to get it done the day after she nailed Nate in the airport or if it had been there before. (Maybe it was Nate Sr.!)

In contrast, the show tries to make a big deal out of David's remaining closeted before his family. But even this feels a little forced -- the guy's father just died, his mom's cracking up, his brother's moving into his turf and he's got a business to run. Give him a break!

And that's about it. You could write a book about the over- and undertones in "The Sopranos" -- the complexity of Tony's relationship to his son and his daughter alone is disturbing, nuanced, outrageous and a bit scary. The Fishers are simply a much less interesting ensemble.

Most of the problem, it seems, is Ball, a one-time playwright. With "American Beauty," he gained some cachet as a chronicler of the blacker side of American suburbia, but his TV career before that -- he worked on "Grace Under Fire," "Oh Grow Up" and "Cybill" -- is undistinguished. And "American Beauty," a teasing pastiche of feints, was hugely overrated.

The film was based on a cheat -- a schlub supposedly disliked by his wife and kid is played by the winning and likable Kevin Spacey. That's not necessarily Ball's fault, but the plot certainly was. In the end, after 90 minutes of suburban angst, the climax comes when a rigid military father (preposterously) thinks his son is having an affair with next-door neighbor Spacey and then (even more preposterously) walks over to proposition Spacey himself. Rejected, he then shoots Spacey, presumably in a fit of repressed homosexual rage.

The failure here is similar. Ball never actually goes for the jugular. Death is the ultimate black humor subject, and while we get the requisite queasy shots of sewn-up corpses and weeping widows, the family's perspective on it all is a little too serene. Isn't there something biting to be said about the rituals we go through at such a horribly vulnerable time? About those who profit from that vulnerability in those plush, kitschy funeral homes? In the end, in "Six Feet Under," death becomes them, and it shouldn't.