To Bork or not to Bork

Democrats give notice that ideology will play a role when the Senate considers Bush's judicial nominees. 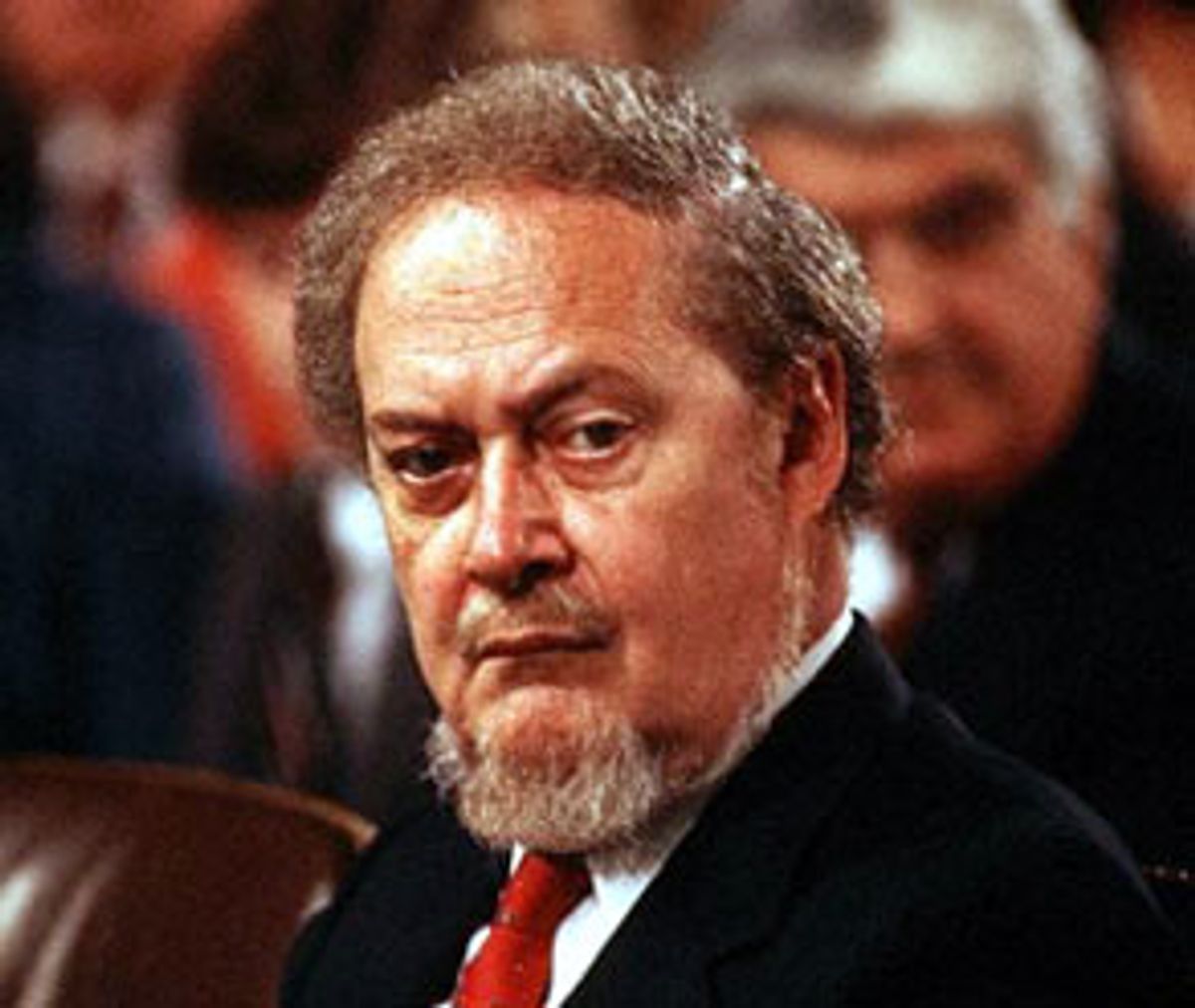 Everyone knew that when the Democrats took over the Senate, the road for President Bush's judicial appointments became much rougher. But to make sure that message was clear to the administration -- and perhaps to create some political cover for when the time comes to oppose would-be judges -- Democrats decided to publicly explore the reasons why judicial nominees should be grilled about their political leanings.

In a hearing Tuesday, it was the job of Sen. Charles Schumer, D-N.Y., a member of the Senate Judiciary Committee, to run the proceedings with the high-minded title "Should Ideology Matter? Judicial Nominations 2001." Schumer had already given a preview of his own answer to the question in an Op-Ed piece in Tuesday's New York Times, in which he wrote, "Pretending that ideology doesn't matter -- or, even worse, doesn't exist -- is exactly the opposite of what the Senate should do."

He reiterated that point during the hearing, saying that ignoring ideology has led to more "gotcha politics" in the confirmation process, with senators and interest groups digging for dirt in nominees' writings, financial records and personal lives to camouflage differences over issues like abortion and gun control. He argued that such practices increase public cynicism about the nomination process. "Let's make our confirmation process more honest, more clear and hopefully more legitimate in the eye of the American people," he said.

But Republicans at the hearing made it known that they believed fairness was the last thing Schumer and other Democrats were looking for in the confirmation process, and that Democrats were instead laying the groundwork for a full-bodied "Borking" of Bush's nominees.

When Schumer said "ideology," Republicans heard "litmus test," and Sen. Mitch McConnell, R-Ky., helpfully offered what he feared were some of the liberal tenets that nominees would have to accept in order to win confirmation. In McConnell's view, Bush nominees would have to support "partial-birth abortion," "judicial activism" and "racial preferences." Nominees would also be required, he said, to promise to "restrict First Amendment rights of political speech and association" -- code for supporting campaign reform limits.

With 107 judgeships needing to be filled by the Bush administration, Republicans are warily watching the Democrats' positioning. A GOP source close to the Judiciary Committee said that three of the president's first batch of nominees are likely to be targeted by Democrats:

A Democratic source close to the Judiciary Committee said that the party was reserving judgment on all of the Bush nominees, but agreed that McConnell could be in danger.

Republicans are indignant at the prospect that Bush's nominees could be subjected to an ideological third degree. They claim that former President Clinton's judicial nominees were never subjected to the Republican equivalent of such testing. And they say that Schumer was trying to change the ground rules of confirmation at Tuesday's hearing. "What's being suggested here is a significant departure from the way that nominees have traditionally been treated," said Sen. Jon Kyl, R-Ariz. "Have there been exceptions? Quite. But they prove the rule because they are exceptions to the general deference that's always been given to the president's nominees."

Schumer, of course, disputed this, saying that Republicans' method of avoiding appearances of partisanship against Clinton nominees was to put the former president on notice that all judicial liberals would be dead on arrival.

The witnesses at the hearing tilted slightly against Schumer's argument. While the second panel, made up of law professors and activists, split evenly on whether explicit questions of ideology are proper in the nomination process, the first panel was a wash for Schumer. C. Boyden Gray, White House counsel in the first Bush administration, got to the point early in his statement. "If the goal of today's hearing is to answer the question, 'Should ideology matter?' I can answer in one word: No," Gray declared. Carter administration counselor Lloyd Cutler echoed Gray's sentiments. "To make ideology an issue in the confirmation process is to suggest that the legal process is and should be a political one," Cutler offered. "That is not only wrong as a matter of political science; it also serves to weaken public confidence in the courts."

Schumer finally found a like-minded partisan with Laurence Tribe, a Harvard law professor and one of former Vice President Gore's attorneys in the Florida recount battle. Tribe prompted frequent smiles and affirming nods from Schumer throughout his testimony, which found him frequently leaving aside his prepared remarks and speaking off the cuff. He said that the current fashion of staying away from ideological questions in the confirmation process forced senators to forgo tough questions, and instead substitute "ludicrous platitudes" and legal softballs at nominees.

Tribe gave his impression of a typical exchange. "'Would you follow the law?'" he asked, before answering himself: "Duh."

But Tribe wandered dangerously far into partisan minefields. He accused Republicans of "revising history" on the 1987 defeat of Supreme Court nominee Robert Bork, claiming that the Senate's rejection was based on legitimate concerns about his narrow vision of rights implied by the Constitution, not on Democratic scapegoating.

In another example, Tribe reserved his most heated words for the current Supreme Court. Tribe described it as "utterly contemptuous" of Congress, mentioned its verdict in Bush vs. Gore as an example of its "disdain for democracy" and worried aloud that Bush's stated preferences for more justices like Antonin Scalia and Clarence Thomas would pull the court hopelessly out of step with the American mainstream.

These remarks went largely unchallenged during the hearing itself, mostly because there weren't many Republicans around to say anything. Only Alabama's Sen. Jeff Sessions, the committee's ranking minority member, stuck around for the second panel, and he spent as much effort tangling with Marcia Greenberger, co-president of the National Women's Law Center. She criticized Sessions' concern about ideology, saying he had quizzed liberal judicial nominees on everything from welfare issues to civil rights law. He suggested that Greenberger's criticism of the Supreme Court was an overreaction to valid decisions that her group merely disagreed with.

Greenberger claimed that the opinions authored by Reagan and Bush Supreme Court appointees -- with the exception of David Souter -- should upset "anyone who is concerned with civil rights." She cited the court's reversals in the past several years of provisions in acts like the Violence Against Women Act and the Americans With Disabilities Act as proof the Republican justices are bent on narrowing ordinary citizens' means to fight discrimination.

But a Republican Senate staffer who witnessed the hearing said that the Democrats seemed more interested in getting fodder for the next election season than in protecting citizens from a renegade Supreme Court. He singled out Greenberger as playing "Chicken Little of the hard left" in a Democratic drive to capitalize on unfounded fears about Bush's judicial nominees. "They'll keep saying, 'The sky is falling, the sky is falling,' and that will help them raise some more money."

And there's more to come. Schumer promised at least three more panels discussing how the Senate should handle touchy questions about judicial nominees. But as the senator reminded Sessions during the hearing, there isn't much else to do until the parties hammer out rules for the new Senate. Confirmation hearings to fill the empty slots in the federal judiciary can't begin until Senate Republicans and Democrats agree about whether senators will be able to put anonymous holds or "blue slips" on nominees they don't like, and whether the president's Supreme Court picks will be guaranteed a Senate floor vote, regardless of the Judiciary Committee's disposition.