The artist's early self-portraits weren't just raunchy and masturbatory -- they presaged his beautiful and notorious future. 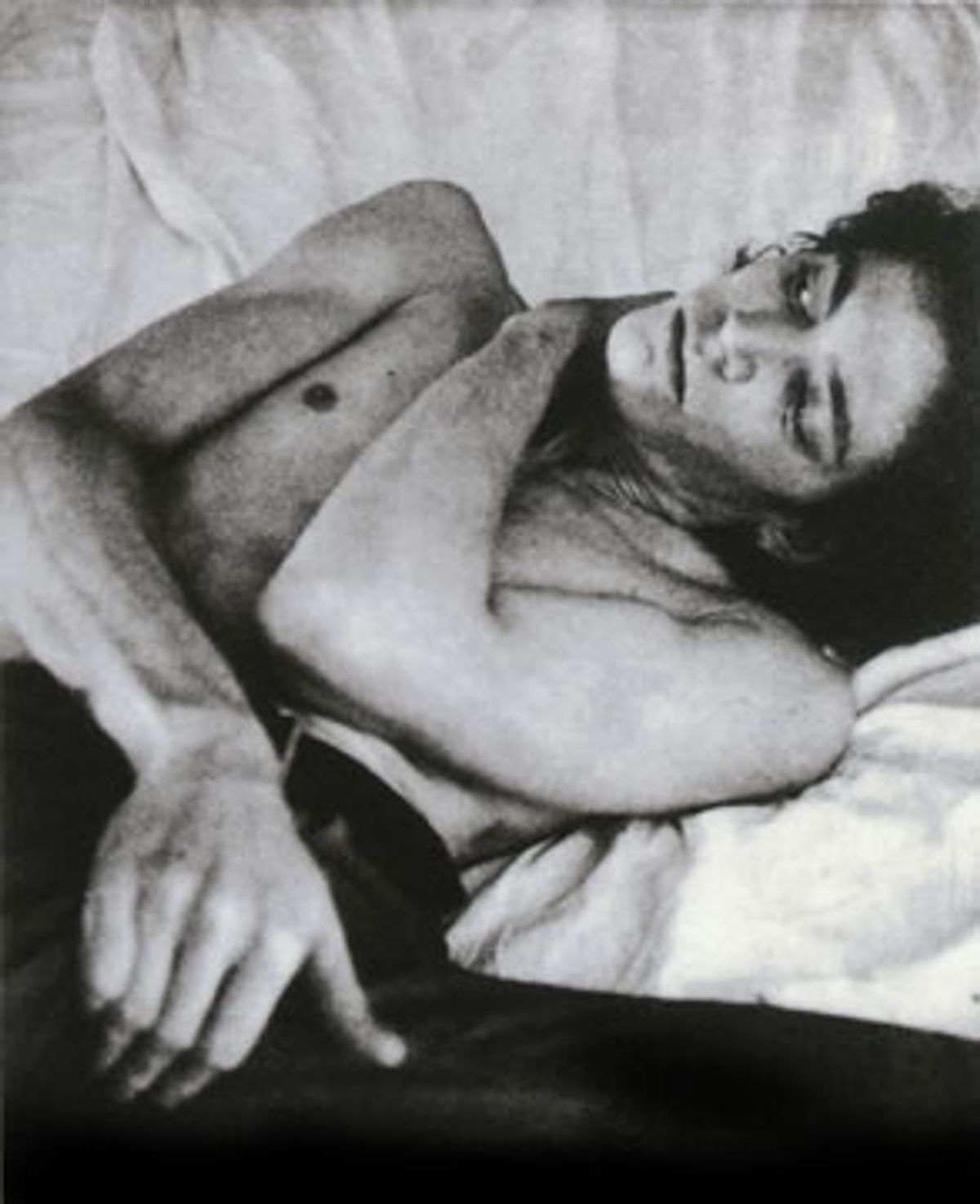 Robert Mapplethorpe, more than many other artists, managed to find a way to exploit his pleasures for fun, art and profit. He wasn't the first to do so -- artists throughout history have created images of things and comely persons they adored. But he was clearly the first to be able to do this in the milieu of the queer sexual underground. His vision, as it comes through in his indelible photographs of gay male sexuality and perversely well-endowed flowers, may have been a bit on the ominous side and limned with sadomasochism-tinged Catholic guilt, but the subtext is always about getting off on sex and unexpected forms of beauty.

Somehow, it's nice to learn that his work was always that way. His first photographs, black-and-white Polaroids taken in the early 1970s, have recently been collected in a slim volume called "Robert Mapplethorpe: Autoportrait." These little-seen formative images reveal the artist, alone in his studio/bedroom, confronting the creative act, his body and sexual fulfillment.

The self-portraits may not be Mapplethorpe's most memorable pictures, but in many ways they serve as a template for everything he did subsequently. They offer a unique insight into his artistic development as they trace the parallel tracks of his artistic and sexual histories. He consistently applied formalist composition to his photographic subjects, bracketing them snugly against solid backdrops, much like flesh cinched tightly in a leather fetish ensemble. Adventurous sexual practices are often equated with wild abandon -- the antithesis of elegance -- yet the crisp black lines of a leather lace being tightly wrapped around testicles, as Mapplethorpe is seen doing, add a nice bracing contrast to an image.

What gives Mapplethorpe's work its power is just this tension between the act and its presentation. The artist, who died of AIDS in 1989, had a refined eye and defined physical tastes. In the book's short, contextual essay, scholar Richard Marshall writes that Mapplethorpe "wanted to infuse art with personal reference, subjective expression, and allusion to real time and emotion." Marshall also points to the genre of body art -- staged physical acts performed for the camera, like Bruce Nauman's famous work in which he becomes a human fountain by spitting a mouthful of water into the air. Mapplethorpe's actions, however, seem to be fairly accurate reflections of his sexual proclivities. One presumes he did the same salacious things without the presence of the camera.

For example, in an almost narrative sequence of pictures (Pages 39-42), he uses an unadorned mattress, and its striped ticking and white buttons, to provide a framework of geometric abstraction. First he shows the mattress alone, a worn and slightly faded surface upon which sexual activity unfolds. It's essentially a backdrop for a theater of solo sex play. In the next image, his hand and forearm extend from the left holding a white piece of fabric, perhaps a sheet, perhaps something to bind. Formally, it adds a sense of physicality and movement to the vertical stripes. In the next image, we see Mapplethorpe dressed in skimpy but severe black leather -- an ominous hood with a zippered mouth, a studded collar around his neck, gloves and a swooping U-shaped garment that cradles his crotch while thin straps of leather lie taut over his shoulders. (In other photographs, this same garment resembles something the burlier guys from Kiss might wear if they were kinky rather than cartoony.)

It's a leather scene to be sure, yet one presented in a highly composed manner. The photographer's pale flesh is smooth like polished marble, and the black fetish garments provide areas of contrasting black. There's a stillness to the image that suggests that the mattress may not be resting on the floor, but leaning against the wall, playroom style.

In a less artful group of pictures that precedes the mattress shots, Mapplethorpe unzips his pouch to reveal his formidable penis sheathed in metal rings. The elaborate bangles also happen to be connected to nipple clamps that, via a harness ring, appear to be attached to his penis-wear. The picture is a bit too much about the hardware to be a truly effective work of art. But one must bear in mind that these pictures were taken circa 1972, when such things were still very much rooted in the sexual subculture, not the costume department of a rock video production company. One of Mapplethorpe's achievements was to give that subculture vision in the world at large, adding to an artistic dialogue on identity politics.

For all the raunch that's on display, there's also a sense of sweetness in the auto-portraits. The youthful artist (seen long before the Mephistopheles guise of his famous late self-portrait) seems almost innocent in the images that close the book. They find Mapplethorpe reclining on his bed in positions that evoke a teenage girl on the phone to a crush -- gabbing in the position that can and here does lead to dreamy self-pleasuring (nude, sans toys). But in these works, it's pretty clear that the artist is not just playing with himself. He was on his way to making some of the most memorable sexual images of late-20th century art.