At the crack house where I expect to find the abused toddler, I manage to get a foot in the door, but she's nowhere to be seen. Second of two parts. 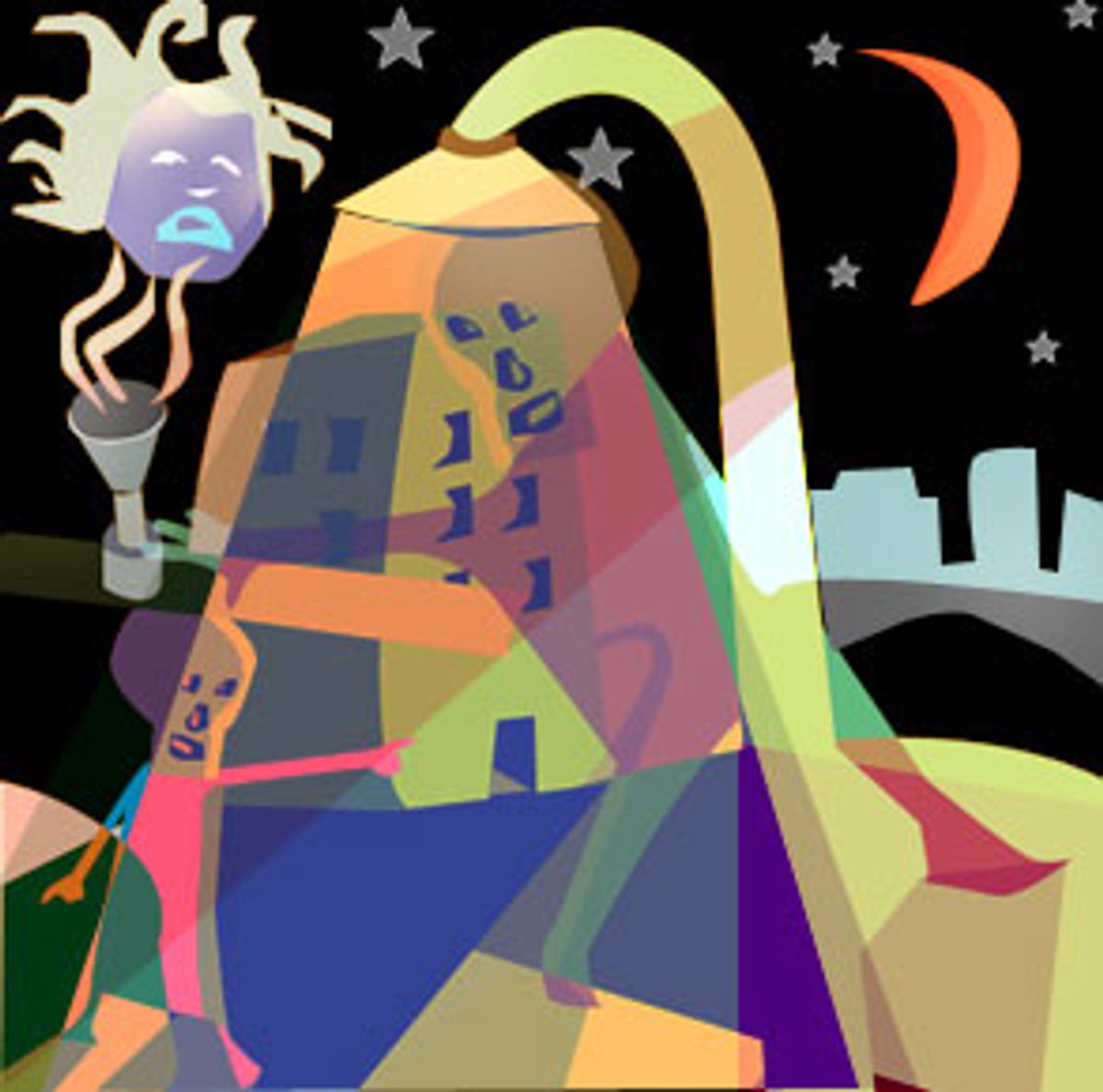 On the dark first floor, I chose the door not below Frazier's apartment. Much banging later, a woman opened the door and warily confirmed the upstairs neighbor's veracity that Frazier's was the right-hand, not the rear, apartment. She was deaf and blind, however, to any crack parties. Vaguely parading Rochelle's vulnerability, I beseeched her for information and leaned forward trying to connect. She flourished a nearly foot-long carving knife from behind her back. Backpedaling, I declared she'd been more than helpful.

Passing my confidante's apartment, I mentally apologized for doubting her. If she wanted to talk on the street, she was entitled to her idiosyncrasies. I pounded on Frazier's door, leaning over from the side as usual to avoid a shot coming through, calling, "Hello, Miss Frazier? I just want to talk to you a minute" in a pleasant voice unrelated to the door-shaking ruckus. After a few moments I was rewarded with a tentative "Who?"

The unseen woman and I scrabbled awkwardly around the ring for a couple of rounds. I asked for Frazier and heard Frazier was out. Dripping affability, I said: "Well, that may be, but I'm a social worker, and I really need you to just open the door a minute." (I lack a social worker's master's degree, but "caseworker" is too nebulous a word to force open a locked door.)

She said she was just watching the apartment and couldn't possibly let me in -- a frequent and particularly galling assertion.

"Come on," I whined. "I really don't like talking through closed doors, letting your neighbors in on your personal business."

Amazingly, this last whine produced the lovely sound of a turning lock. The woman opened the door a good 3 inches, and for the third time that afternoon a woman peered out from behind a door braced against further intrusion. A rough guess put her in her early 30s.

I commenced an "incremental creep." Oozing doofy, mild concern, I self-effacingly crowded the door as we spoke, just enough for her to give way inch by inch. But she was steadfast that as the mere caretaker of Frazier's apartment she couldn't possibly admit me. Why didn't I come back later that night or, better yet, tomorrow, when she was sure Frazier would be home?

Attempting a magician's misdirection -- leaning, looming, not quite touching it -- I sneaked the door back the couple of inches needed to insert one foot. No telling what this dangerous stunt might trigger on the other side, and this was the first of a handful of cases, all onerous, in which I pulled it. I glanced down pointedly to indicate that the door was anchored open and then reverted to puppy-dog ingratiation. She looked over her shoulder into the apartment.

"No, tonight won't cut it," I told the visible wedge of face. "See, we hear that Rochelle is sick, so I gotta come in to just check whether she's here so I can give her and Miss Frazier a ride to the hospital. Come on -- I'm not looking to bother any of you. I got my car right downstairs, and I came all the way out here on a Sunday just to give Rochelle a ride to the hospital to make sure she gets the medicine she needs." I wagged my tail hopefully.

"Look mister, there ain't no kids in this apartment. You got my word on that."

"Yeah, I know. I believe you. You seem like a nice lady. But hell, I get in trouble with my boss if I don't look for myself. And the way things are these days, my landlord sure appreciates it if I keep this job."

She was hard to read. Foisting as much blame as possible on the distant abstractions of boss and landlord, powerless to exercise any personal discretion, I repeated myself and then gazed at my foot. She admired it too. We were stuck, me with a foot in, she wedded to the other side of the door. She looked over her shoulder a third time, then swiveled back, bringing her hand up to brace the door. We were both afraid.

"Look, I told you: The mom ain't here and neither is the baby. Now, this isn't my apartment and I can't just be letting you in."

I had to get in or give up. You can push people only so far, then they clutch blindly, often physically, for relief. She kept anxiously checking with someone inside -- Frazier, or somebody packing who knew what. I made the conceptual leap to forget my needs and concentrate on hers.

Either that did it or, more likely, the folks inside were now presentable, because she grudgingly swung the door wide. I gulped air and then peeked around the other side of the door. My eyes darted to a prosperous-looking, imposing man in his mid-40s and a gray bag of bones as easily in her 20s as her 40s. I was half-expecting a gun. Having apparently just dressed, the man patted himself down for wallet and keys (pipe? rock?) and stormed out swearing, his wraith in tow.

I took the doorkeeper at her word that she wasn't Frazier. Rochelle wasn't in any of the kindling-furnished rooms and, scared as I was then early in my career, I didn't search the bathroom and closets and look under the bed as I would have a month or two later. The woman didn't know Rochelle's whereabouts, but now that we were alone, her plea echoed the neighbor's: "I hope you do find her, 'cause some bad things are happening to that child."

So a neighbor who suspected sexual abuse and a crackhead who knew of it did nothing. Then one brave soul brought Rochelle to Brookdale, only to reconsider and flee. Try as I might, I couldn't get the doorkeeper to elaborate on the "bad things," and didn't linger once she made her reticence clear. I hit the street in time to see the man and his wraith driving off in an incongruous, gleaming boat of a Buick, the party over, or at least relocated.

With no other leads or options, I headed to Brookdale for an update before returning defeated to my office in lower Manhattan. I could have called the hospital, but that wasn't necessarily quicker than driving the 15 blocks there and one always learns more in person. Actually, I could have called Brookdale before hitting Frazier's block. But with a sexually abused toddler who'd been spirited away in the middle of the night, I never considered it.

Safely back in my car, I reveled in the frontier blast of it all. Alone on weekends, I picked my route by interest or whim, cruising mythic neighborhoods I'd otherwise shun. The city provided the wheels, gas and context to encounter various sorrows and wonders and maybe sweet-talk my way into a crack house. Only when I decided to call in or head back did I answer to a deskbound boss.

Stifling fear is exhausting, but an adrenal buzz lingered as I parked in a loading zone at the hospital and got a final surprise: Frazier, Rochelle and a relative had been there for an hour. I had the sense not to ask whether it was the same relative who'd inaugurated the case the night before.

Frazier proved a gruff, 200-pound woman pushing 40. Not particularly upset at her daughter's plight, she said Rochelle was her only child under 18. Whether directly for rock or by turning a willful, amazingly blind eye -- a distinction of no consequence to Rochelle -- Frazier had allowed some cracked devil to mess with a very young girl.

Guilty or not, other mothers confronted with irrefutable medical evidence of sex abuse usually bellow in response and vow vengeance on some fall guy down the block who somehow mysteriously gained access to their child. Frazier felt no need for such theatrics.

Nor did I feel the need to spout indignation. I lectured clients regularly but icily, with an eye toward communicating the agency's seriousness. There was little to be had but self-indulgence, though, in yelling at Frazier. Addled by crack or made desperate by its absence, she still knew her sins. My job wasn't to express society's horror but to lead miscreants to self-incrimination. I fed out rope to whoever would take it, prepared to hoist the person high with my potential testimony.

Brookdale thought gonorrhea had caused the 2-year-old's foul-smelling discharge. Having lost control of her once, it had admitted her on a social hold, pending lab results and follow-up by the child welfare agency's 9-to-5-ers. A de facto removal in place, I basically recoiled from Frazier, not needing to browbeat or trick her into making an admission. Let my nonemergency colleagues attempt that in private. And let a judge express society's disdain by rescinding her rights to her child.

But for some reason, Frazier felt the need to reveal that her brother had pimped from her apartment until she'd thrown him out the day before despite his threats with a golf club. Was it a coincidence that he was tossed more or less as the case hit the fan?

Lying poorly, but trying to pin the blame elsewhere, Frazier said her brother was the only male with access to Rochelle. His freest, most frequent access branded him a prime suspect. But having told me her brother ran whores in her home, Frazier ignored all the people drawn by crack and sex, three of whom I'd just met. Her brother's banishment was too little, far too late.

She showed me a prescription she'd obtained for Rochelle's discharge a week before from a local clinic. The doctor who issued it for a toddler without reporting her to Albany should've been prosecuted, not that lax "mandated reporters" (professionals such as doctors and teachers) ever were.

Frazier's relative then privately revealed her disgust with the rampant crack use and prostitution at Frazier's apartment and offered reluctantly to take Rochelle. Able to cite this nonanonymous statement in my report, I wearied of the exercise and left after looking in on a bored, sallow little girl lying on a gurney with an I.V. in her arm. Enough people had fussed over her already, with more to come. With the rare luxury of physical evidence, there was no need for an emergency worker to bother her.

With Rochelle already at the hospital and no other kids in the crack brothel, all my timorous thumb sucking over "right" vs. "rear," banging on doors and scary "incremental creep" had been moot. But it brought me closer to my eventual mastery of fear -- at least to the extent that, like a stage actor right before his cue, I learned how to use it.