Even after losing its sexiest, tawdriest moments, this teen romance is still hotter, smarter and more fearless than its Hollywood contemporaries. 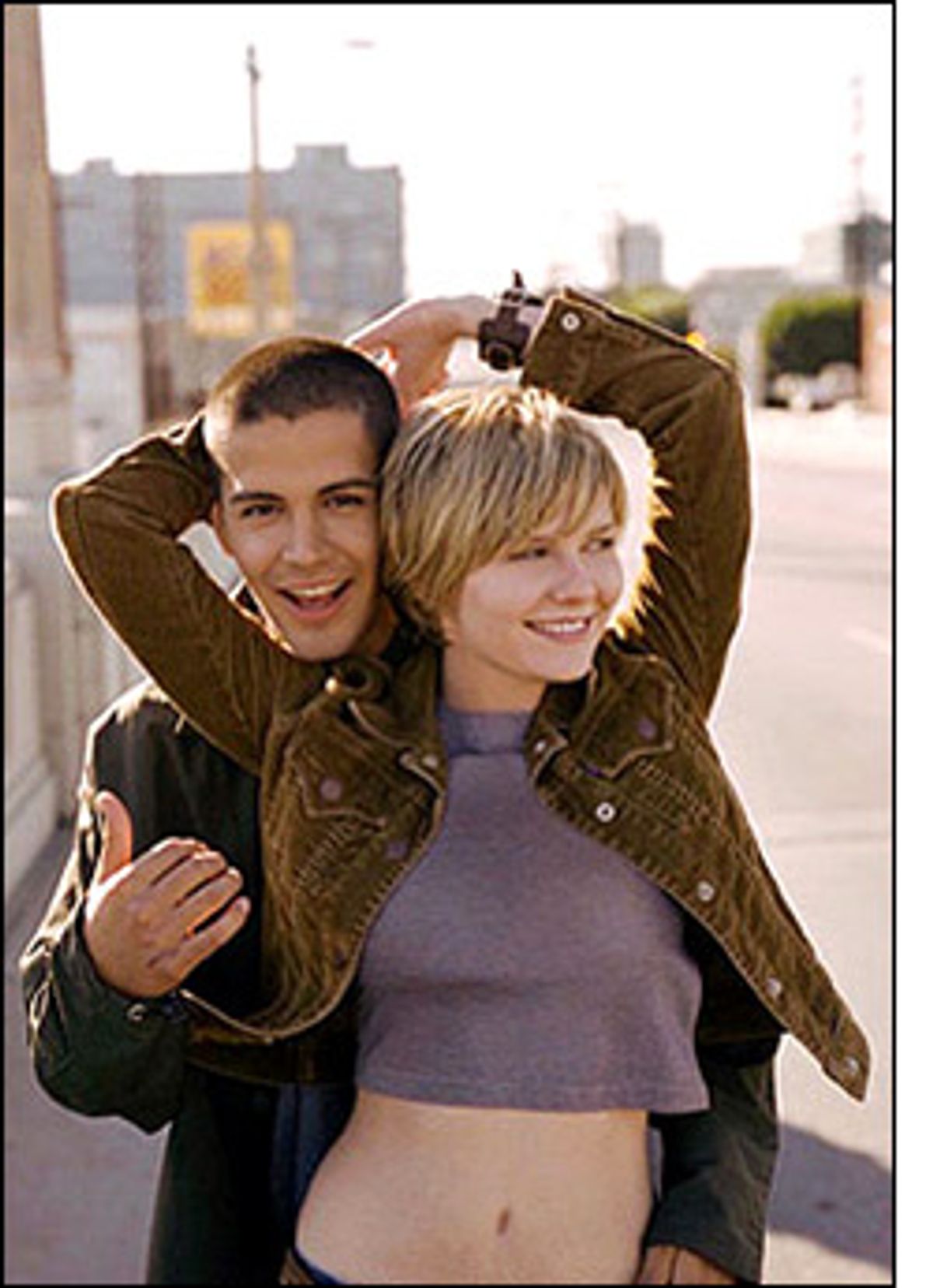 Mainstream romances that respect the intelligence and emotional acuity of their audience are much rarer than they should be. Apart from its camp value (and the lovers' fabulous clothes), the romance in "Pearl Harbor" was impossible to buy. It's as if Hollywood assumes a certain level of stupidity on the part of its audience: In Tinseltown's eyes, we're a nation of suckers with grown-up jobs and gratifyingly deep pockets, and we'll buy anything.

But if pictures like "Save the Last Dance" and "Bring It On," or the new "Crazy/Beautiful," are any indication, adult moviegoers are better off posing as secret teenagers. Why is it that, more and more, teen love stories are the ones that refuse to talk down to their audience -- even when they're dealing with stock conventions like romances that cross color or class boundaries? "Crazy/Beautiful" has its flaws, but it's elementally entertaining, and believable enough to transport us completely into its world for an hour and a half.

Nicole (Kirsten Dunst) is a 17-year-old troublemaker who's careering toward disaster: She has been picked up on DUI charges, and thinks nothing of cutting class to get high with her equally fast pal, Maddy (played with husky, gravelly charm by tough pixie Taryn Manning). Her emotional problems are knotty and deep-rooted; still, Nicole barely acknowledges the privileges her social status affords her. She's the daughter of a well-off liberal congressman (Bruce Davison), and she lives, along with him, her uptight stepmother (Lucinda Jenney) and her toddler stepsister, in a minimalist-mod California luxury abode that appears to be 90 percent windows. She couldn't care less that she's able to attend a top-flight school -- a school that one of her less-privileged classmates, Carlos (Jay Hernandez), has to travel two hours by bus to reach.

Carlos is blazingly bright and ambitious; he hopes to escape his barrio background to become a naval pilot. When he and Nicole meet, the sizzle is immediate. The two get along so well that their cultural backgrounds should be the least of their problems, but still, their worlds don't mesh comfortably. This is a classic love story, but one that's not afraid to take a few jabs at the cluelessness of goodhearted liberals who, despite their admirable intentions, can never quite grasp how the other half lives. You see it in the way Nicole's father, anxious to help Carlos get into the U.S. Naval Academy in Annapolis, makes an awkward and ridiculous comment about Carlos' neighborhood contemporaries' falling prey to "la vida loca" in the inner city.

Worse yet, Nicole is essentially a careless party girl who fails to grasp Carlos' dedication and commitment to succeeding. In a neat twist on the standard saga of the bad boy who leads a good girl into trouble, "Crazy/Beautiful" gives us a hardworking, responsible boy beguiled by a girl who is, for now at least, no good.

The key to "Crazy/Beautiful" is that director John Stockwell, working from a script by Phil Hay and Matt Manfredi, doesn't play the adult outsider with a camera. He has sympathy for his characters, but he never passes judgment on them -- there's no implicit tsk-tsking in the way he shows Nicole half-zonked but blissful, clambering into the back seat of Maddy's jeep (and eventually into Carlos' lap) as it whizzes through night-lit Los Angeles boulevards. He's smart enough to see the allure, and the perilous beauty, of teenage recklessness without going so far as to condone it. The story occasionally runs aground on melodramatic writing, especially in the scenes involving Davison and Dunst: As a parent at the end of his rope, Davison gets the squarest dialogue. Even so, he's such a preternaturally grounded actor that he makes even his most heavy-handed lines sound graceful.

Hernandez and Dunst make an appealing pair, gamboling like playful pups on a beach date or stripping down to their skivvies (he awkwardly, she brazenly) in Nicole's lux but messy glassed-in bedroom. Even if Hernandez doesn't have much depth, he's both smoldering and good-natured, a sex symbol with plenty of safety valves.

But Dunst's Nicole is the heart of the movie, and this role stands apart from anything she's done before. Dunst has always been adorable: In her earlier roles, with that lustrous hair and skin that seems to glow from within, she has always looked like a textbook dream teen queen. But what makes her genuinely appealing is the current of instinctual intelligence that thrums beneath the surface of her performances. In pictures like "Bring It On," "Dick" and "The Virgin Suicides," she's always vital, never vapid. Even when she's up to blatantly ridiculous teen shenanigans (like jumping up and down, squealing over that evergreen teen heartthrob Richard Nixon, with costar Michelle Williams in "Dick"), she always tempers youthful silliness with just the right amount of self-awareness and poise.

There isn't a lot of teen silliness in "Crazy/Beautiful." Though this is a world where girls just wanna have fun, a degree of menace is always lurking in the background. When Nicole and Maddy descend upon a straitlaced high school football game in their midriff tops and hip-hugger jeans, zonked out on any number of unnamed substances, they're joyously wayward girls. (The other kids look like dullards next to them.) But you can't help fearing for them; their recklessness, the very thing that fills them with life, is also fraught with potential danger.

Stockwell has succeeded in making a movie that resonates in spite of itself: Running scared last year after the Federal Trade Commission scolded studios for foisting unwholesome material on kids, Touchstone demanded that Stockwell make significant cuts to "Crazy/Beautiful." Consequently, we never see Nicole and Maddy getting high, or even really drinking: We're left to read the clues found in drowsy muscles and glazed eyes.

What's more, the cutting renders one segment practically nonsensical: We see Nicole at a party, obviously stoned out of her mind and possibly having partaken in some kind of desperate sexual misadventure. But the details aren't even suggested -- they've simply been lopped out. We're left to wonder exactly what happened. As Stockwell, clearly frustrated, said in Newsweek, "We were trying to make a cautionary tale, and we couldn't show the behavior we were trying to caution people away from."

But even though it was mashed under the thumb of Disney's authority (and, really, should we have expected anything different from Uncle Walt's Evil Empire?), "Crazy/Beautiful" still manages to succeed on its own terms. That's partly owing to Stockwell's good sense, and his obvious openness to his actors. The movie scores some lovely-looking moments, too, thanks to cinematographer Shane Hurlbut: Carlos' early-morning bus ride to school is bathed in that authentic 6 a.m. light, light that's a bit too raw and beautiful for most half-awake human beings to bear.

But it's Dunst's movie, and her performance cuts deep. Adorable as ever, she drapes this latest character with layers of desperate, nameless, teenage sadness. She may be strung out half the time, but she doesn't drift through the movie in a daze: What's so painful, and so moving, about her performance is that she's bracingly alive every minute. Her self-inflicted numbness is a defense against suffering, but not a solution to it. And when she looks into Carlos' eyes, she gives the sense of, momentarily at least, seeing her way clear.

That's a heavily romantic notion, that one human being can save another from destruction with nothing but pure love. But if you're going to tangle with that idea, a teen romance is the place to do it. With their whole lives ahead of them, it was ridiculous for Romeo and Juliet to off themselves with poison and daggers, but anyone who doesn't understand why they did so is simply missing the point. In "Crazy/Beautiful," the lovers save themselves just in time, and their 11th-hour good judgment is, if not a guarantee of a happy ending, at least an affirmation that they'll be able to find their way. Kids today, they're more sensible than they were in the 16th century. But they still make for a damn good story.