On the custody circuit

My sister and I were lawless in transit, silent upon arrival. 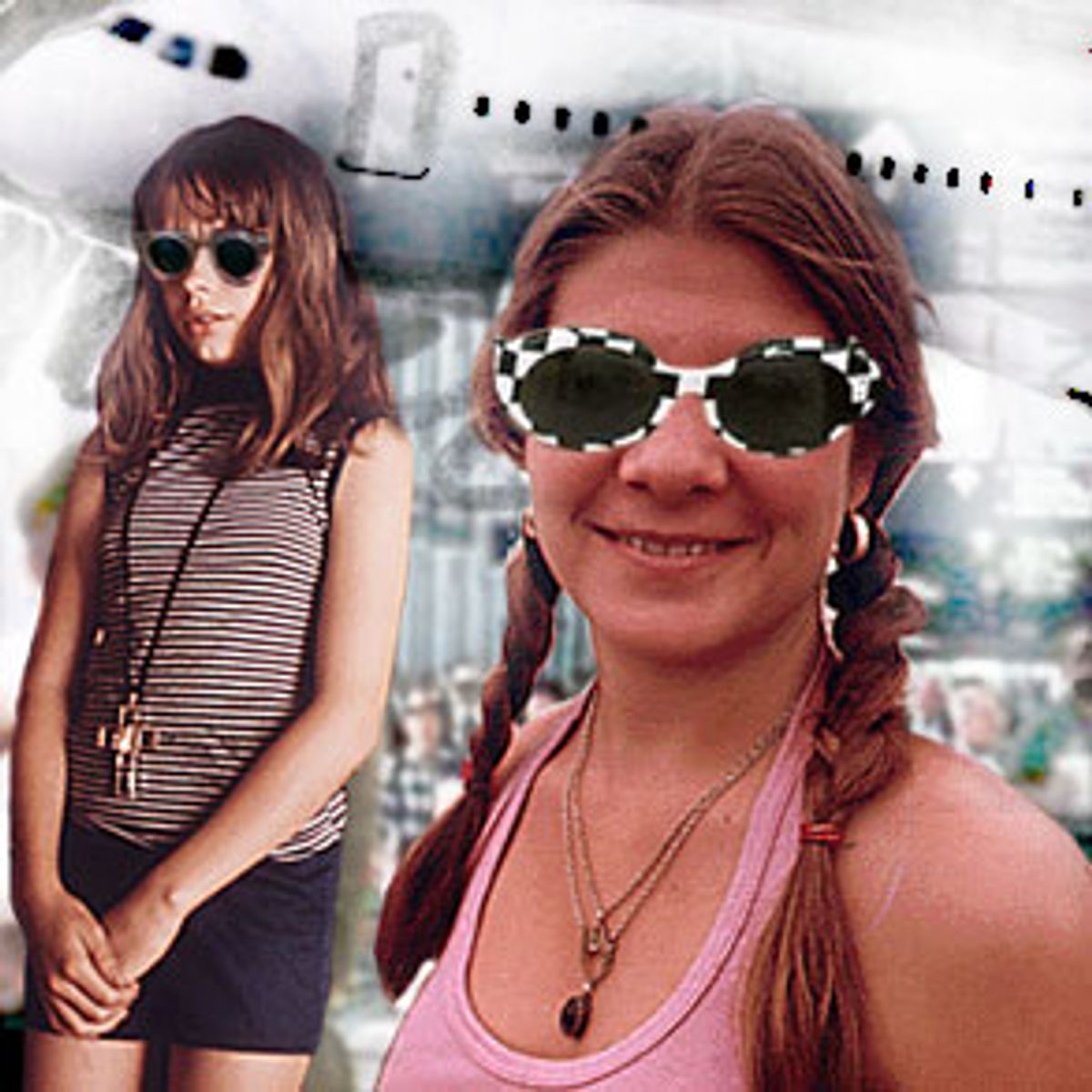 I recently went away for the weekend. I flew on a great big airplane, up over fluffy clouds that, despite my scientific understanding of cumulous configurations, still appear to be floating cotton balls awaiting friendly witches on brooms.

I am an adult now. I have two children, and a job that grants me the opportunity to wear fancy shoes. Still, nothing can return me to my childhood like the sort of travel that requires airports, security X-rays and planes with stilted air and plaid polyester seats. I was a child of divorce. In my story, my father was neither disinterested nor deserting. Instead, my older sister's and my visitation consisted of traveling to him (and later my stepmother and two stepbrothers) one weekend a month, every month, for six years.

I am a smart woman. If as a child I resisted any impact my parents' divorce had on me, I now call it like it is. I don't know if I would have become the woman I am had my parents stayed married or, better yet, loved each other madly to begin with. Either way, I accept that I am the sort who craves frequent, close contact with the people I love, and that, occasionally, I have bouts of longing and feelings of loss that even designer clothing, chocolate chip cookies or marital lovemaking cannot completely diminish.

I know myself well. I applaud my talents, and neither run from my limitations nor offer excuses for them. However, even after years of reflection, both privately (on the couch) and over coffee with best friends, I am always somewhat surprised that merely embarking on a trip that begins with air travel can send me spinning into childhood memory land.

My sister and I were 11 and 9, respectively, when we made our first trip. Much to our chagrin, red, white and blue airline buttons were pinned to our sweatshirts, signaling to stewardesses and pedophiles alike that we were underage and traveling alone. After that first time, we refused such adornment, making it clear that if we had any trouble finding our connecting flight or ordering our apple juice, we would certainly holler.

It wasn't only the innocence of our youth that propelled us to act more independent and sophisticated than our years. Our status as "guardianless" made the mere idea of adult supervision unthinkable. We had escaped our overburdened, and often sad, mother and had not yet reached our waiting and happily relieved father. We were in flight, and in limbo.

There is a culture of travelers who frequent the airports of small cities like Pittsburgh, Baltimore and Newark, N.J. Of most interest to me were the many businessmen and fewer businesswomen who traveled with chic things like briefcases and suits with creases in all the appropriate places. I imagined these people had very important jobs that featured polished mahogany tables in air-conditioned boardrooms. They were neither housewives nor psychologists, so, by definition, they were foreign and worthy of envy.

I studied their manner, lest I need to one day mimic the life of an adult with an important job entailing travel. With the exception of an occasional nod, I don't recall any of them ever talking to us. Perhaps we represented their unspoken, worst fears: We were symbols of love gone wrong. Symbols of love gone.

My sister and I did all the sort of things that would have made my parents tremble had they known. We sat at diner counters and ordered two meals on one ticket, two drinks on another. When it came time to pay, we brought only the drink bill to the cashier. We took pleasure in risking our moral façade by abusing the trust of the adults around us. We would get into long conversations with shopkeepers, to distract them while shoplifting handcrafted stone paperweights, magazines, candy or makeup.

In those days, one could smoke in airports. We stole my mother's Salem Lights, and burned our fingers on fast matches as we attempted to light the cigarettes. I practiced walking like a movie star while inhaling my contraband. Once, I remember a woman shaking her head at the sight of my 10-, maybe 11-year-old self. Even then I knew that my act was transparent, yet I dismissed such unconvinced strangers as old-fashioned bitches.

As my sister got older, she took special interest in young men wearing uniforms with accents resembling that of our then-president, Jimmy Carter. "Stop fluffing your feathers," she once told me, as she used improvised Southern charm to seduce the already seduced.

Her love interests were merely distractions to me, and motivated me to become even more outrageous in an attempt to regain her attention. I would make dirty jokes loud enough to amuse or annoy other passengers. Once, in a crowded airport bathroom, loud with the ruckus of nearby construction, I pretended to be a pilot, landing a fighter jet that was being pummeled by bullets. In short, I was a mixture of youthful playfulness and outrageous delinquency. In my sister's eyes, however, I was hilarious. And at the time, that was all that mattered.

Without ever discussing it, we agreed that travel was a time to reject social norms and appropriate behavior. We could have played it differently. We could have taken pleasure in embracing maturity and behaving like little ladies. We could have slept, caught up on homework or daydreamed. But those options never even occurred to us. With a taste of freedom, we pushed the envelope. And the adrenaline rush of doing so distracted us from any deep and penetrating sadness or sense of shame.

When we finally arrived at either destination, the first question both parents always asked was "How was the flight?" Without looking at each other, we would shrug and nonchalantly say, "Pretty good, I guess." It's not that we meant to lie, or withhold anything from our parents. That was just the way we were. To us, our flight was fine, nondescript even. In fact, any confession that we had been out of control or in trouble would have been, in a way, an act of disloyalty.

My parents' views of the divorce differed enormously. My father's story was that although difficult and sad, it was the best option for all involved. My mother's version was that my father was an asshole. Our opinions didn't seem to matter much, not even to ourselves. One thing was certain, though: Agreeing with either of them was tantamount to parental soul murder. With that price tag, we just kept quiet.

Except, that is, in times of air travel.