With Bush's poll numbers sliding, some GOP insiders fret that his low-key style is not playing with the public. 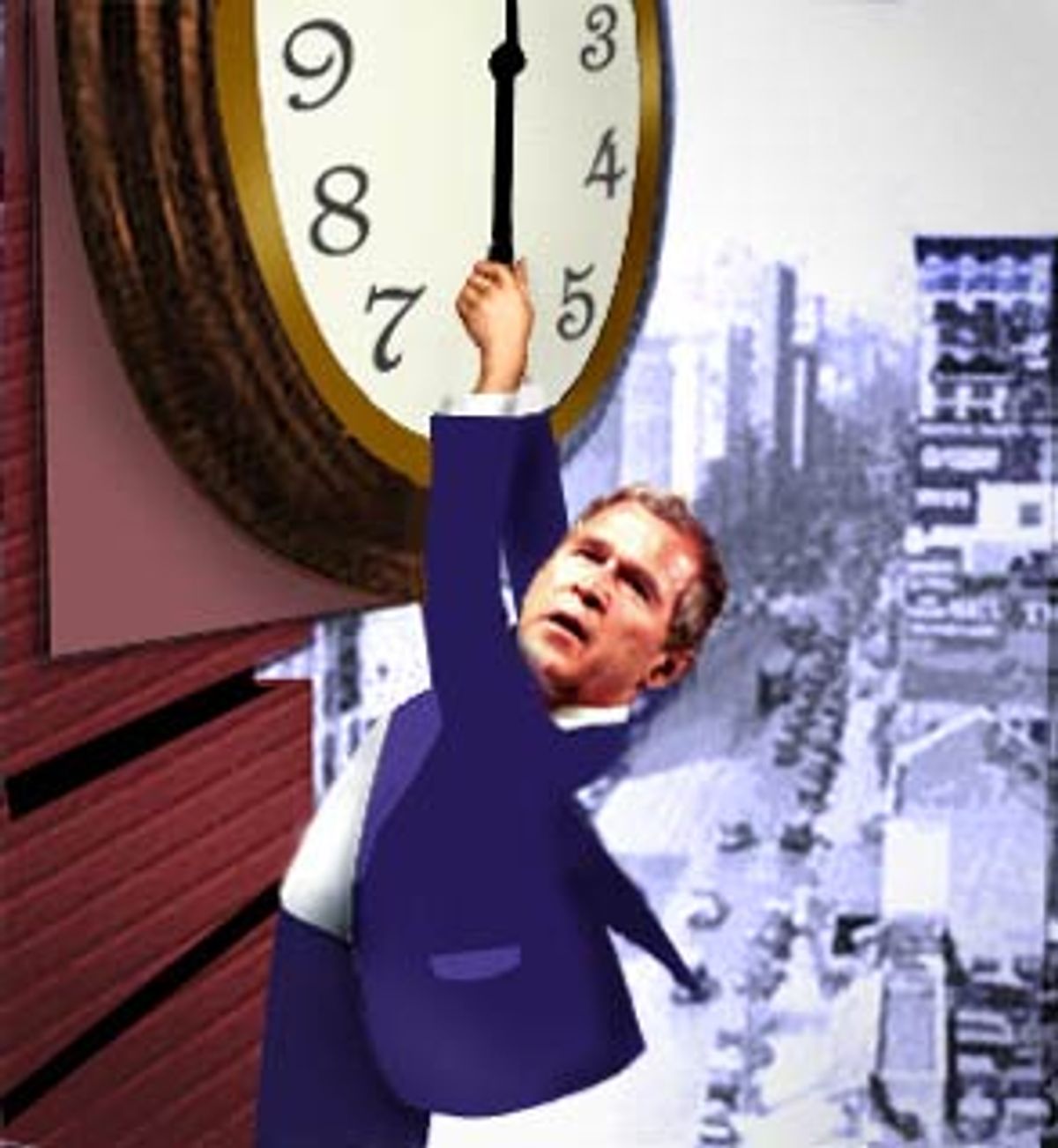 George W. Bush came to Washington promising to be the un-Clinton. He wouldn't get in people's faces, he wouldn't sully the Oval Office with tawdriness, he wouldn't feel our pain. He has succeeded.

Unfortunately for Bush, at least as of right now, there were two positive things Clinton had going for him that Bush does not: Americans believed that Clinton cared about them, and they thought he was up to the job. This was achieved not merely by policy efforts, but by a 24/7 running campaign that had the president speaking about every possible issue, driving the debate. And it manifested itself as support in the public opinion polls.

President Bush, conversely, has kept himself distant and remote, not merely from the cameras but from the legislative process. The strategy in many ways has been to create a relatively news-free environment. Bush has held fewer press conferences than either Clinton or his father at this point in their presidencies. White House reporters now regularly leave Pennsylvania Avenue to search for stories. Press charters have been canceled for presidential trips due to lack of interest among the press corps.

"His first instinct was to be the opposite of Clinton, which was probably wise," says William Kristol, editor of the Weekly Standard. "There was a giant sigh of relief that he wasn't in your face, that he didn't feel the need to step into every national issue. But that may now be wearing thin, at least in terms of driving the agenda."

"The A-4 president is getting A-4 attention from the public," says John Czwartacki, former spokesman for Senate Minority Leader Trent Lott, R-Miss., now a lobbyist. "He's not really considered a factor in people's lives right now." ("A-4" refers to Page A-4 in newspapers, where news about Bush has been showing up.)

Unfortunately for Bush, this has begun to show up in the polls. In Washington, the telltale sign that a politician's in trouble comes when the party boss arranges a conference call to argue that there's no trouble at all. On Thursday, Republican National Committee chairman Jim Gilmore did just that, which ended up feeding the fire.

A New York Times/CBS News poll released June 21 showed the president's popular support had dropped 7 points, to a 53 percent approval rating. While Bush's predecessor suffered similar numbers at this point in his first term, Clinton had suffered a few ignominious defeats at this point -- on gays in the military and a host of Nanny-gate scandals. Bush, conversely, has gotten almost all of his $1.35 trillion tax cut passed, in record time, and had just returned from a fairly successful trip to Europe. But Americans seemed to be losing faith in their president regardless.

Moreover, poll respondents had concerns about Bush on specific issues. Support for his handling of environmental issues had dropped to 39 percent of the public; his response to the energy crisis met with only 33 percent approval; and his foreign policy was supported by 47 percent of the public. Fifty percent of those polled thought Bush favored the rich.

Conservatives began immediately lashing out at the poll. "It's a slow news day when the top story in the New York Times is a presidential poll," wrote John J. Miller and Ramesh Ponnuru on Nationalreview.com, "especially a trumped-up one saying George W. Bush's popularity has 'diminished considerably' when in fact it's down only 7 points ... This is perhaps a cause for modest concern at the White House, but no more - surely nothing that warrants the screaming, APB-treatment of the Times." The New York Times' William Safire took a swipe at his paper in its own pages, claiming other polls showed no such drops.

The White House, of course, continued to pooh-pooh. "I just dismiss the premise of the question," Fleischer said on Thursday to Associated Press reporter Ron Fournier, who had asked about Bush "sagging in the polls."

"The president," Fleischer said, "having emerged from a very close, one of the closest elections ever in the history of the United States, his presidency has been very well-received by the American people. Depending on what poll you want to look at, his job approval is anywhere between 50 percentage points and 60 percentage points. The fluctuation is minuscule. Some days it goes up, some days it goes down. But the president has emerged from one of the closest elections in American history to have received solid support from the American people."

Did he mention that this was one of the closest elections in history? Anyway, few in D.C. are buying it. Bush has the bully pulpit of the presidency, an incumbent's natural rally-round-the-president base of public support, an unusually docile press corps, and still he doesn't seem to have made much progress with the public.

"The polls are accurate," says Czwartacki. "He's got his base, and he's got intensity among his base, but everywhere else he doesn't have anything. He hasn't made the inroads he's going to have to make if he's going to win reelection, and if he's going to be of help to Republicans in the off-year elections."

Kristol sees the polls "as a warning sign for Bush. They're not terrible." With 50 percent general approval and 35 percent general disapproval, "he's got a plus 15, which is not dreadful. It's certainly better than the election when he got fewer votes than Gore. He's holding his voters and getting a few Gore voters. On the other hand, what these numbers show -- apart from the fact that the economy is low - is that Bush has not succeeded in putting his own stamp on the political debate."

Bush can turn it around, Czwartacki insists. "It's less a matter of people rejecting his policies as it is: They could give a damn." More natural Bush critics believe the polls are a result of an extreme agenda. "First of all, Bush did not properly interpret the results of the 2000 election and, like the Republicans of 1994, pushed his mandate too far to the right on some very sensitive issues like energy and the environment," says Allan Lichtman, a professor of history at American University, who once worked for the Gore campaign. "Secondly, he hasn't really connected with the American people. Not rhetorically or inspirationally. He hasn't been able to achieve that mystic bond that Ronald Reagan was such a master at establishing."

But a Republican strategist, speaking on condition of anonymity, says that Bush has brought this on himself -- and not for the wrong reasons.

"Bush has a humble presidency," the strategist says. "Clinton would be pounding the shit out of his big tax relief bill for eight years if he had passed it. I understand the sort of stylistic aversion to the Clinton way of doing things -- not just by Bush but all Republicans -- but you look indifferent. Maybe that's Clinton's legacy. If you're not going to be making the newspapers every day, you're not going to move numbers."

And, as Kristol points out, in politics you're either playing offense or defense. "He got his tax cut through, but now we're debating a bunch of Democratic issues, like the patients' bill of rights. I think if you ask a Republican what Bush's agenda is going to be over the next six months, they wouldn't necessarily have an answer. What's the second act of the Bush presidency? It's a little easier to see difficulties ahead than victories."